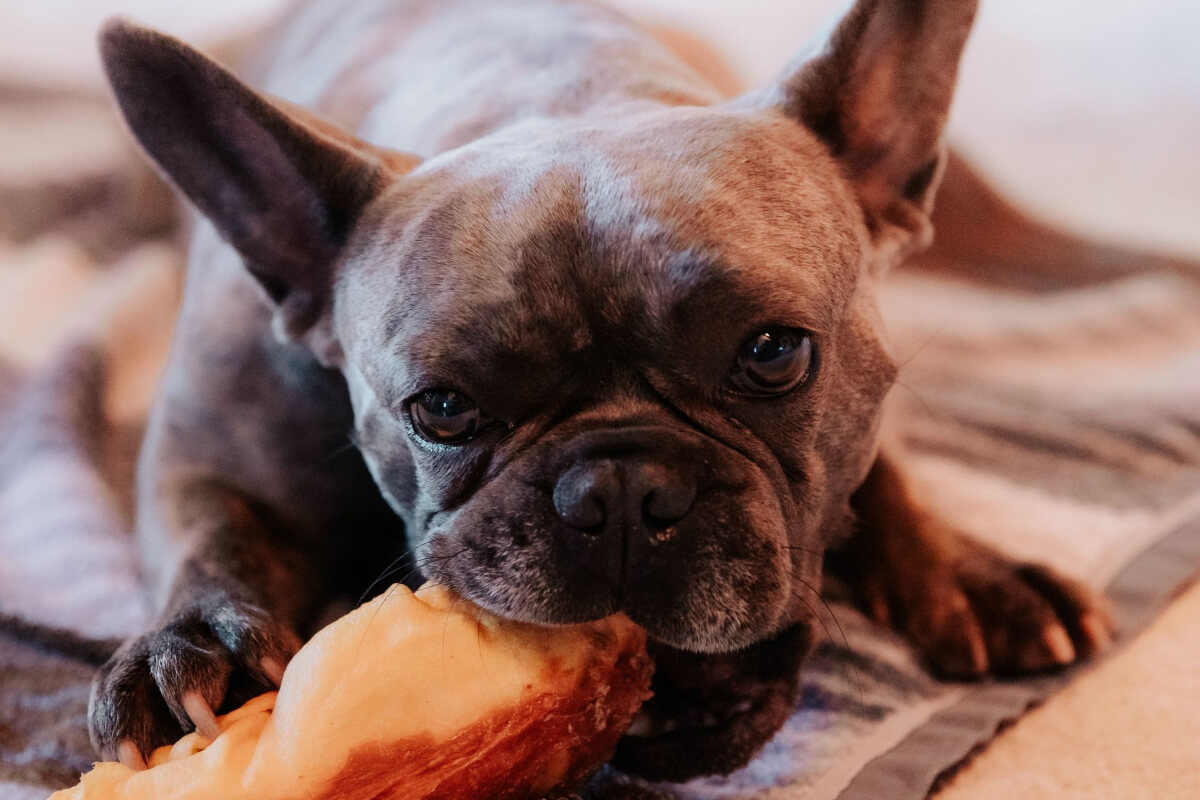 If you have encountered a situation where your dog gets agitated, growling or even starts biting you when you come close to him when he is eating his meal, this could be a sign of possessive aggression behavior.

He could also demonstrate this behavior to the extent of attacking your puppy if the puppy comes near to his possession.

Possessive aggression (commonly known as food or resource guarding behavior) can happen on any things that your dog feels is of great value to him, and he attempts to protect them from being taken away.

This can range from foods, toys, beds or even things that you would consider as garbage such as a bottle that is being thrown into the bin (if he finds them to be valuable).

So do not be surprised if you find your dog peeing on your car’s tires as he finds the scent to be enticing and wants to claim his ownership of them!

Your dog will have some level of possessive behavior as it is part of his natural instinct to protect his resources. (Dog living in the wild need to safeguard their resources for survival).

But when he gets over react and protective of these resources, this turns into an aggressive issue that needs to be corrected especially if you have young kids in your home who might be unknowingly trying to take away your dog “treasure” and suffer from a bite as a result.

How Can Your Prevent Possessive Aggression?

To make your dog do away with this undesirable behavior, you would need to train him and let him know that by giving up what he is guarding on, he will get a much more valuable reward in return.

Of course, you should never take away your dog’s resources by force as that could potentially agitate him and make him lunge or bite at you.

You need to train him that by “releasing” his resources to you, he is going to receive a much more appealing reward and be sure that he is feeling comfortable seeing your hand reaching out to his food or toys.

How Should You Do The Training?

Start with the toy handling and once he is reacting well, go on to train him on his food handling. Usually it would be much easier to get him trained to “let go” of his toys rather than foods so start with the easier one first to get the momentum going.

Train Your Dog To Release His Toys

Prepare some high value treats that your dog will find it hard to resist. Approach your dog calmly and place the treat near to his nose.

This will grab his attention and as he looks at you, give him the treat and at the same time, take away his toy. When he is done with the treat, give him back his toy for him to play with.

You should gradually cut down the treats and replace the rewards with just praise or gentle scratches on his ears or do a belly rub on him as you see improvement in his possessive behavior.

Remember to keep up with the positive reinforcement whenever your dog exhibits the desirable behavior of giving up his resources. This will help him to associate rewards (treats, praise or petting) with non-possessive behavior.

Once your dog is getting comfortable with you taking away his toys without showing signs of aggression, you can proceed with food handling which is typically a more challenging one.

To a dog, toys are more of enjoyment and entertainment whereas food is for his survival needs. So when you are taking his survival resources, he will naturally act very aggressively.

Train Your Dog To Feel Calm As You Handle His Food

You will need to let your dog know that when you are handling his food, GOOD things will happen, and he shouldn’t get worried that you are going to take away his food.

This can be done by:

1. Designated a fixed location for feeding your dog. A regular location will make your dog feel at ease as he knows that by going there, he will get his food.

2. Place his food bowl in that location and do not put any food in it yet.

3. Wait for your dog to approach his food bowl. He is likely to look at you when he finds that there is no food in his bowl.

4. While he is looking at you, toss some kibbles into the bowl. It is important that you only start tossing the food into the bowl when he is focusing his attention on you as you would want him to know that you are his food provider, NOT the food taker.

5. Once he is comfortable with you handling his food, take the training to the next level by stretching your hand to place the food into his bowl rather than tossing it. This is to train him to see your hand as the food giver, not a food taker.

6. When he is getting used to this training, the final step will be to train him to stay calm as you sit next to him while he is eating his food.

7. Remember to stay calm and remain seated in a relaxed posture while using your hands to place the foods into his bowl.

Your emotional state will determine your dog’s reaction and if you are acting excited or nervous, your dog will start to think that you are going to take his food away and act aggressively.

Show Him Your Leadership

Being an Alpha dog will certainly help you to gain control over your dog and make him “surrender” his resource.

In the wild, the pack leader will make the call as to how his pack member will be allocated with the resources such as food and shelter. So by establishing yourself as his Alpha, you would have that advantage.

You can demonstrate your dominance as a pack leader by making your dog wait for his food and to have him wait for your release command after you have walked past the doorways before he can proceed.

As a leader, you should always eat first before your dog can have his meal. You can place your food (maybe just some tidbit) beside your dog bowl and as your dog is waiting for your command to let him start his meal, you should start with your food first.

This will show your dog that as an Alpha, you will eat first and will further reinforce your position as a pack leader in his mind.

Make Your Dog “Earns” His Resource

Make your dog do some tasks before giving him his resources such as foods or toys. This will make him learn that he has to “earn” his resources and these resources are from YOU and you can take them back anytime.

Let him know that you are the owner of these resources, and he will have to depend on you to have them.

Say for example, it’s playtime and before you give him his favorite chewing toy, make him perform some obedient commands such as “sit”, “down”, “stay” to make him earn his toy.

And as he is playing with his toy, add on other commands such as “Drop It” or “Leave It” to reinforce his thinking that you are controlling these resources.

It’s important that you maintain control as to where your dog can go in your house when he is exhibiting possessive behavior.

This is to prevent him from “free” access to whatever things that he feels are valuable to him (especially on the enticing foods), and possess them by hiding them.

You would only want him to have access to certain resources that you are giving to him so that he knows that you own these resources, and he had to depend on you to get them.

You can set up some baby gates in your home to block his access to the “restricted” areas. (Of course, this is on the assumption that your dog is not able to perform a high barrier jump).

If your dog’s possessive behavior starts surfacing only when you have another new dog in your family, this could be the result of “rival competition”.

Your dog sees the new dog as a potential threat that is going to “take away” his resources and acts aggressive whenever anyone comes near his resources.

You would have to separate the feeding and sleeping area for them as you work on training your dog to correct his possessive behavior.

If your dog is exhibiting extreme aggressiveness whenever you attempt to come near to him when he is holding on to his resources, it would be advisable to seek help from a professional trainer to avoid the risk of him attacking you.

Your professional trainer would be able to find out the main causes for his possessive behavior and come out with detailed plans to correct this behavior.

Dogs will exhibit possessive aggressive behavior when they are guarding on resources (such as foods, treats, toys or the space they are in) that they feel are of value to them. They feel threatened whenever anyone comes close to them and will act aggressively to defend their resources.

This is particularly so if your newly adopted young dog is a stray or abandoned dog. He will attack dogs that come near him when he is eating.

To correct the possessive aggression behavior in your dog, you have to make him feel that what he is getting from you is much more valuable and appealing than what he is trying to protect and guard on.