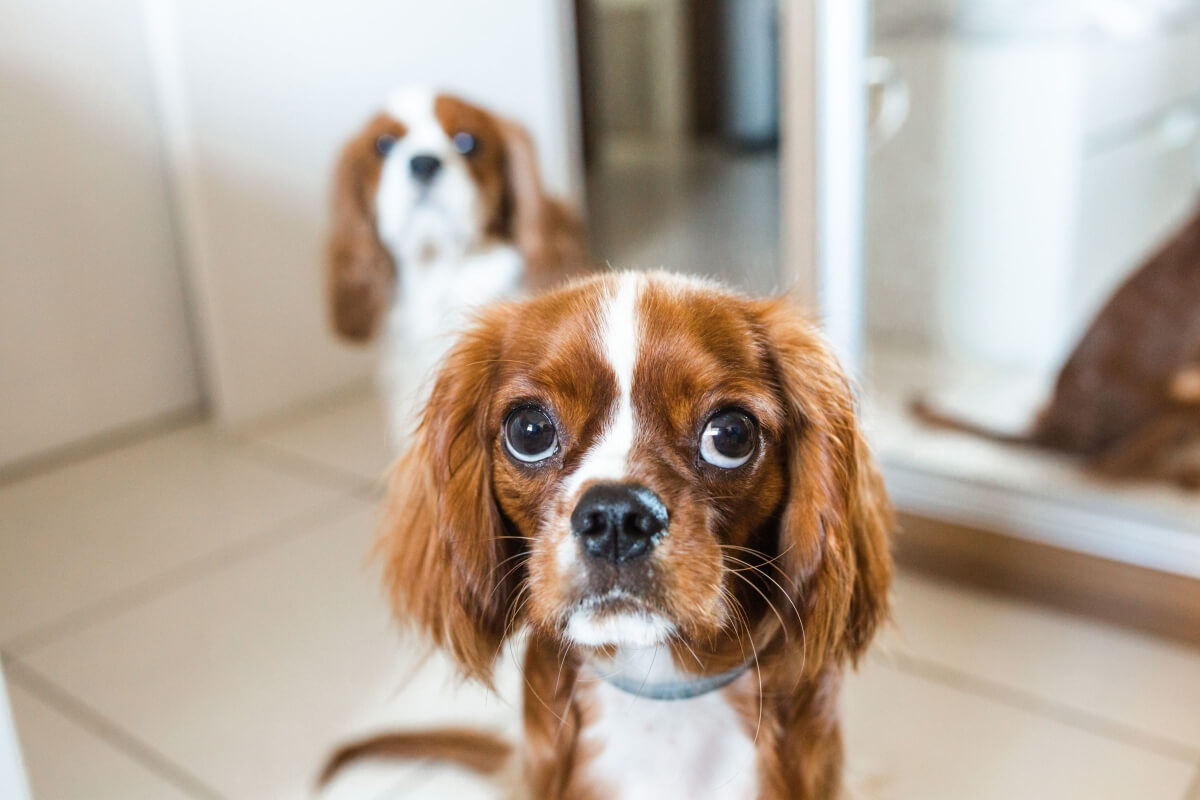 It’s a moment of excitement when you bring home a new puppy and everyone in your family, especially your kids, are so thrilled and keep their attention on this new pet of theirs.

But what’s happening a couple of days later makes your eyes drop!

You saw your residing dog start making his attack on this new puppy. How could that have happened!

An older dog might attack a new puppy when he feels that the puppy is going to snatch his resources such as food, toys or personal space and will react to guard his resources. He could also react as the result of the new puppy’s persistent provoking.

As you are pondering on what has happened and what should be done, be calm and get the FACTS first.

It’s important that you know how to handle and what to expect for interaction between your puppy and adult dog.

In reality, an older dog would usually be very tolerant and patient to his younger peer (puppy) as he knows they are still learning and figuring out dog behavior and would not attack them unless the older dog is a possessive dog.

This is why it is so important that you get the FACTS and know why your dog attacks your puppy and this will determine the approach that you should use to train them.

Get to learn how your young puppy interacts with your older dog to get these facts.

Does your older dog start behaving aggressively towards your puppy only when the puppy approaches him when he is eating his food, playing with his toys or when he is with you? And does the attack only restrict to bark or persistent chasing?

In this case, it is certainly a sign of possessive aggressive behavior and you should work on how to prevent resource guarding for your dog.

Does your dog only react aggressively to your puppy when the puppy persistently harassed the dog such as jumping on him, growling and barking at him or sniffing at him?

You would see that the dog attempts to ignore the puppy by walking away and the puppy keeps provoking him till he gets really frustrated and starts attacking back.

In most cases, the older dog would just give him a bark or a light bite (that would not cause any injury) as an attempt to let the puppy know “Leave Me Alone, I’m not in a mood to play with you”.

The dog would not give chase to the puppy once the puppy back off. In this case, you should not get too worried as your older dog is teaching your new puppy the desirable dog behavior.

As long as your dog does not cause any harm to the puppy, the puppy will start to learn how to behave in front of an adult dog, and you will have peaceful pets at home!

You need to be aware of your dog personality.

If your dog possesses territorial or possessive behavior, he may get agitated and turn aggressive whenever your puppy invades his territory or attempts to take away or snatch his resources such as food or toys. This will lead to your dog attacking your puppy.

Dogs often fight for owner attention, food, toys and their personal space (such as sleeping or playing place).

So the idea is to eliminate these potential triggers so that your dog will not feel threatened by the puppy as a potential risk of taking over his resources.

This can be done by feeding them at different times and places, showing them equal love, giving each of them a separate sleeping place (maybe having 2 crates) and of course not sharing the toys. They should have their own personal toys that you can leave inside the crate for them to play with.

Introduce Puppy Scent To Your Dog

If your adult dog is territorial, you should not have them together for the training till he feels at ease with the young puppy.

What you can do is to pick a neutral place such as your living room to have your dog and puppy being trained one at a time.

Bring your puppy out for a play while keeping your dog in another room. When it’s time for your dog to have his play time, bring the puppy back to the room and lead your dog to the living room.

This is to let your dog get used to the scent that is left by the puppy when he is playing in the living room.

Take turns for them to be in the living room during their playtime and do this for a week till the dog and puppy get used to each other’s scent. Avoid getting them together during this “scent introduction” period.

After a week, you can slowly introduce your puppy to your dog but keep a close watch on their reaction. Have their favorite toys or treats with you just in case they start to bark at each other and you can use it to distract them and keep them apart.

Keep each interaction session short to about 10 minutes and gradually increase the duration as you find them getting along well. Have them together for daily plays and walks so that they could build up their relationship.

Prevent Any Possibility of Resource Snatching

As mentioned in the start of the post, if your dog is resource guarding, it’s important that you do the necessary steps to prevent your puppy from unknowingly trigger your dog’s aggressiveness over his resources.

Keep away your dog’s toys and his food bowl after the playing or feeding session so that your puppy would not have the chances to possess them. Do not give your dog the opportunity to see that his resources are being taken away.

Have you encountered this situation when you are sitting on the floor petting your older dog and out of a sudden, your dog lunges at your puppy who attempts to approach you.

This is a sign of your dog exhibiting his fear that the puppy is going to take away your love for him and invade his territory. He starts to react aggressively in an attempt to defend his resources.

You ought to have a fixed routine for them so that they know their playtime and feeding time and would not get too worried that they are being left out.

One good way to work on this jealousy problem is to set up a playpen (in the area where you would usually be playing with your pets) so that you can have your dog sit beside you and your puppy in the playpen.

In this way, you can be sure that your dog will not be able to attack the puppy as he is protected in the playpen and most probably, he would not see the puppy as a threat because the puppy is not invading his territory or taking away your love from him.

Rotate your dog and puppy playing in the playpen so that they get the equal attention from you. Being unbiased is the key to do away with jealousy.

What is a Puppy License? It’s a period of time (from the time the puppy is 8 weeks olds till he is 6 months old) when an adult dog will allow the puppy to get away with any obnoxious behavior or action and will tend to be very tolerant.

I would consider a puppy to be between 8 weeks old up to 6 months old whereas an adult dog will be 12 months or older.

In fact, in the dog world, adult dogs often give the puppy some special rights as he knows they are young and playful and the young puppy is often able to get away with his undesirable behavior such as barking, growling, jumping at the older dog. The older dog will tolerate these behaviors unless it exceeds his tolerance limit.

But as soon as the puppy turns 6 month old, your older dog will feel that it’s time for the puppy to grow up and behave himself and would start to act back by snapping back, barking back or even biting back as an attempt to correct their behavior.

It’s his way of telling the young puppy “Hey, knock it off! You should behave yourself and stop doing this anymore!”

So it is important for your young puppy to learn and pick up all the right behaviors before his “puppy license” expire.

Let Your Dog Teach Your Puppy The Right Behavior

This is your older dog’s way of teaching your puppy the right dog behavior and very often, you would get overreacted and see that your older dog is being aggressive towards the young puppy and gets overprotective of the puppy.

The older dog may attempt to ignore and tolerate his “harassment” or simply walk away. But if the puppy keeps pestering him till he can’t tolerate it anymore, the dog may bark back at him. Your puppy will start to yelp and run away.

In fact, expressing unhappiness or anger to your older dog is not the right approach. In most cases, your dog is teaching your puppy how to behave himself and this is essential for his development as he is learning the dog behavior during this period.

As long as your dog did not continue to pursue the puppy (rarely would an adult dog be aggressive against a puppy) after that correction, you should leave them alone. Your puppy will gradually learn the “Do” and “Don’t” and get to behave himself in front of the adult dog.

When your puppy is doing something obnoxious, the adult dog is going to correct him, and he will get the idea that this is something that is undesirable and will avoid doing it again.

An adult dog is superb at using just enough force to intimidate the puppy without actually hurting him even when he bites them.

This Is What You Should Do

Let your puppy interact with your adult dog. If the dog starts to correct the puppy and the puppy yelps and the adult dog back off thereafter, that would be perfectly fine and you should not interfere.

Only when your dog continues to chase after the puppy when he yelps and runs away, then you should step in and separate them.

As I mentioned before, dogs usually aren’t going to be aggressive to puppies, so give your dog a chance to work things out with your puppy and this would be the best course of learning for your puppy as humans can’t replicate dog to dog interaction.

Avoid being overprotective on your puppy, give him the opportunities to learn and be trained by the adult dog (as long as he is not hurt).

Have a routine schedule daily to have your puppy engage in some exercise to tire him out. You see, young puppy are full of energy and very often, this hyperactive behavior can make your older dog agitated.

By getting your puppy to play some physical games such as tug of war and Frisbee, it helps to let off some of his excessive energy and make him less active. As the saying goes “A tired puppy is a GOOD puppy!”