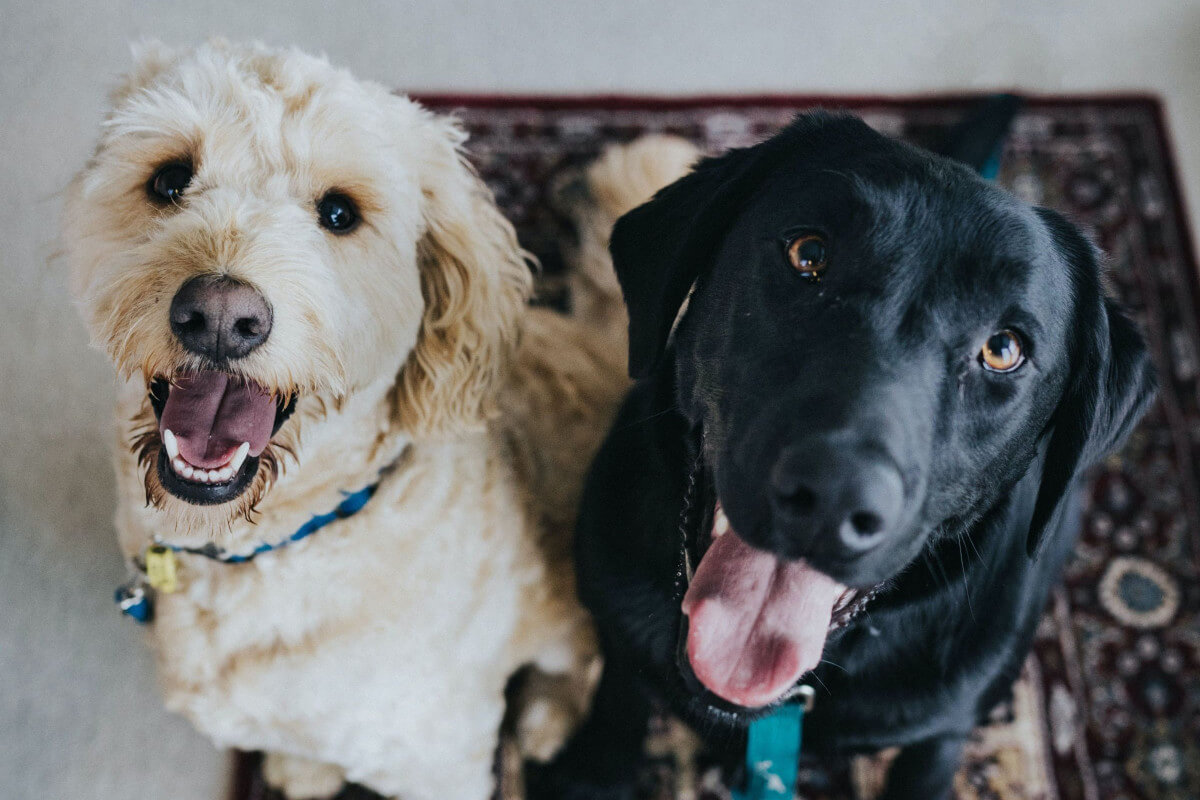 It’s certainly going to be a hard to crack issue when you have two dogs that can’t get along well in the house. It is inevitable that they are going to get hurt if the fighting goes on.

This makes you wonder why your younger dog keeps attacking your older dog despite him being so gentle and well-mannered.

What should you do to stop this fight?

You see, every time your dogs fight, there is usually an underlying cause that leads to their fighting. There is often some sort of issue that they both have in common.

You need to find out the “attacking” causes and work on the relationship between your dogs.

A younger dog may notice that an older dog gets more attention than he does from you. He is confused as to why you are paying more attention to the other dog and this can lead to jealousy.

When this happens, the younger dog may try to get attention from you by attacking the older dog.

This is a form of aggression that you’ll be able to identify.

Every time your older dog comes running up to you for some petting, he will probably get a spanking from the younger dog.

If your younger dog isn’t calm and quiet when you arrive home, it’s going to be tough for him to remain calm when he sees you petting your older dog.

So, if he isn’t behaving himself when you step into the house, ignore him completely to make him learn that this behavior is not encouraged.

Only offer him your focus when he has calmed down and is in a submissive posture.

If your younger dog is being disruptive, use time-outs. Create a seclusion area (a crate will be an ideal choice) for him to go to when he doesn’t behave himself.

This will make him learn that aggressiveness will lead to his isolation.

If he is acting appropriately in the presence of the older dog, praise and reward him with a treat for his good behavior.

Your younger dog will be more likely to repeat the right behavior if you give him positive reinforcement for his obedience.

Make sure that you spend equal amounts of time with both of your dogs. This will help to ease any jealousy and improve the situation.

Due To Possessive Aggression

Dogs are social animals, and they need to be comfortable in the presence of other dogs. If your younger dog is possessive of you, he may turn aggressive to other dogs or family members who come near you.

If your dog is very possessive, it is possible that he feels that you are his “property”, and he will try to keep people out of your home and away from you. This behavior can be very destructive.

Keep a lookout for the following signs of your dog’s possessiveness:

1. Your dog has a hard time getting along with other dogs that you show love to.

2. Your dog is attempting to be possessive of you.

3. Your dog may show aggression towards family members when they go near you.

4. Your dog may try to keep your visitors out of your home.

If your dog is showing this behavior, he needs to be corrected and taught to be more tolerant towards people and pets around you.

If your dog is displaying possessive aggression, he may be experiencing a fear of losing his place in the pack or suffering from what is known as “a shelter dog syndrome”, where he is forced to fight for what he needed as a dog.

So depending on what’s causing your dog to be possessive, you will need to come out with a training plan for him.

Say if he is acting possessive due to the fear of losing your affection, you can make him feel that your love for him is not going to go away because of the older dog.

Let him sit beside you when you are at home, give him a hug or scratch on his chest and let him smell you.

Do this in the presence of the older dog next to you to make him feel that he is still getting your love despite having the older dog around.

This will make him feel at ease and will not get worried about the older dog “stealing” your love for him.

If your dog is displaying possessive aggression due to shelter dog syndrome, you can make him feel secure in your presence by ensuring that you are the one who is taking care of him for all his needs.

You should give him plenty of attention, especially when he is feeling vulnerable. When you do this, he will come to think of you as his protector, and he will not feel the need to attack any dog that comes near him.

Once your dog has stopped exhibiting possessive aggression, continue to reinforce good behavior, until he has associated the desirable behavior with a positive experience.

Avoid any form of punishment such as hitting or scolding your dog, as that will only increase his aggressive behavior.

It may take time and patience to train your dog, but once you have taught him to control his impulses, he will be much more well-behaved and less likely to attack the older dog.

If you can’t stop your dog’s aggression, you may need to seek help from a professional trainer or veterinarian who can help your dog overcome this issue.

If you notice your younger dog growling or even attacking the older dog when he comes near his food bowl, it could be a sign of food aggression, and you need to take action right away.

Food aggression can occur in all breeds but is more prevalent for stray and abandoned dogs as they are often found in cardboard boxes without any food and water.

This makes them always desperate for a meal and that can lead to food aggression problems when they are adopted.

So, if your younger dog used to be a stray dog before he was rescued and adopted by you, he may have an aggressive reaction towards other dogs and humans.

How To Prevent Your dogs From Fighting Over Food

1. Do NOT feed your dogs from a shared bowl. Make sure that you have a dedicated food and water bowl for your dogs.

2. Do not put your dogs in the same room. Feed your younger and older dogs at separate locations. This will prevent them from having the chance to fight over food or water.

3. Always clear away any residue food (if there is any) from the dog’s bowl immediately once they are done with their meal. Stray dogs who have suffered from hunger before are often on the lookout for food even when they are not hungry.

4. Always supervise your dogs while they are eating and drinking. To do so, you will have to feed them at different times.

5. Also, make sure you are giving your dogs the right type of food for their age.

For example, if you are giving your younger dog the same diet as your older dog, he may not get the sufficient nutrients and will always be on the lookout for more food. And a fight will occur if he attempts to snatch the food from the older dog.

It is common for an older dog to experience a seizure and if your younger dog is not used to seeing this behavior, he may act out due to fear or panic and start attacking the older dog to make him stop this behavior.

If you have an older dog that suffers from epilepsy, you can protect him by doing the following few things.

1. You should separate your younger dog from the older dog immediately. You can do this by having the dog in another room, or on a leash. Keep them separated till your older dog recovers from the seizure.

2. Rough play can drastically increase the risk of an epilepsy attack. So you will have to think of ways to avoid your younger dog from engaging in any rough play with the older dog.

The way to do this will be to make sure that the younger dog gets to exercise regularly. This will give him a chance to release his pent-up energy and keep his energy levels low.

The more interaction you have with your younger dog, the less likely he is to engage in rough play with the older dog.

Pain Is Bothering Your Older Dog

Senior dogs are not likely to play in the way that they used to be. They have lower energy levels and could suffer from health issues such as arthritis, which restricts their movement and makes them less active.

But this is something that a young dog would not know and will keep pestering the older dog to play with him till the old dog turns snappy on him.

The younger dog might interpret this as a hostile act and react negatively to an attack.

To address this issue, you will need to teach the younger dog to respect the boundaries of the senior dog.

For instance, no rough playing is allowed, and he should not jump on top of your older dog as this can cause severe pain reactions in his weakened joints and bones.

Invading Of His Territory

Territorial aggression occurs in dogs when they perceive another dog as a threat in their vicinity.

When this happens, the dog will show signs of aggression.

It is often caused by a lack of socialization, or the presence of a dominant dog in the home.

So, if your younger dog is trying to be the alpha, then he’s going to do some pretty nasty things to your older dog if he invades his territory.

Dogs with the desire to dominate can be highly aggressive and this is a common reason why fights often happen if both dogs are of the dominant type.

To help prevent territorial aggression, you should separate the two dogs during feeding time, playtime, sleeping times and, whenever possible, when you are not around to supervise them.

This will help to ensure that they never cross each other’s path and turn aggressive.

Making them see you as their pack leader will be the best way to prevent such behavior.

As their alpha, they will learn that all their territories and properties belong to you, and they will just have to follow your instructions.