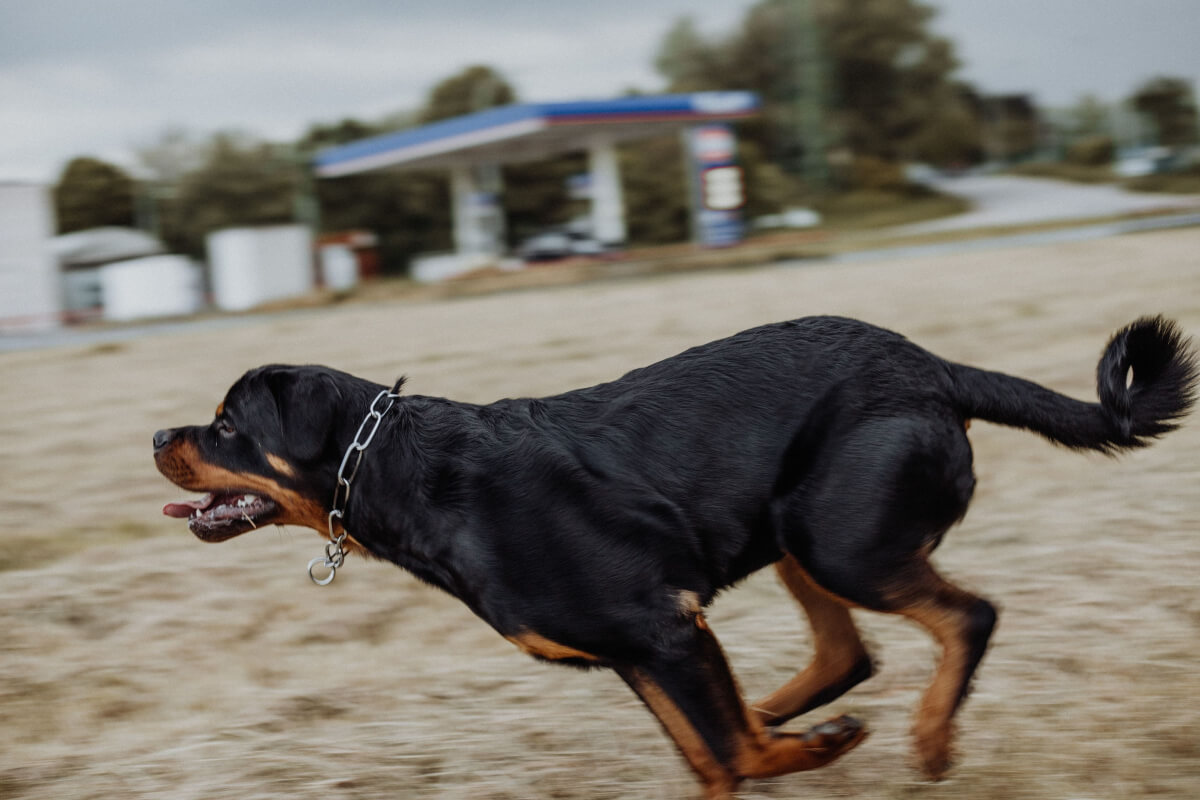 You may have encountered the situation when your dog keeps barking at another dog that walks past your home and when you attempt to calm him down, he bites you.

When your dog is reacting in this behavior, it is often referred to as redirected aggression.

Redirect aggression can be explained as followed:

Your dog is aroused by stimuli (could be a human or a dog or any moving “things”) and attempts to chase the target. His attempt to perform this action is unfruitful as he is either restrained by his leash or confined in an enclosed area and vents his anger and frustration on whatever he can get hold of. If you happen to be beside him, you will be his source of attack.

Why Does Redirected Aggression Happen?

Your dog will exhibit this behavior when he is emotionally aroused by stimuli. The stimuli could be any things that catch his attention, but he is unable to reach it.

And in this situation, your dog is likely to behave in an over excited and hyper state. Frustration can easily be build up in a very short span of time as he is being restricted from making his move to the target due to the leash he is on or behind a barrier such as fence or in an enclosed area.

It is important that you recognize this sign as the longer your dog remains in this state, the more likely that he is going to lunge at you when you reach out to him or if you already close to him.

This behavior is extremely common in hunting breeds of dogs such as Labrador Retriever, American Foxhound, Golden Retriever, bloodhound, pointer, and beagle as their natural instinct is to chase after moving targets.

Take for example, you might be walking in the dog parks with your dog, and he sees a squirrel running past and wants to give chase to it. But as he was on a leash, he got restrained on his movement and started feeling frustrated for not able to make the move. So he redirects his aggression to you who is closest to him.

How Should You Handle Redirected Aggression?

As the saying goes “Prevention is better than cure”, so it is always better to prevent the aggression from happening than to “fix” it when it has happened.

The key to prevent redirected aggression is to avoid your dog from getting into an arousal state. This can be done through controlling your dog’s environment and to alter the way he reacts to the stimuli and reduce his overall arousal level.

Returning to the case of your dog chasing after the squirrel, what you can do is to block his view from his stimuli by standing in front of him and get a high value treat near his nose. Make him focus his attention to you and reward him with the treat.

This will help him to overcome the frustration of not able to chase his target, and he gets a reward from you by paying attention to you.

When your dog is full of excessive energy, he tends to be very hyper and easily aroused by what is happening around him.

So it is important that you have adequate exercise daily to help your dog release his pent-up energy and make him tired out. As the saying goes, “A tired dog is a good dog”.

Plan for a daily routine exercise for your dog and ensure that the exercise is rigorous enough for him to let off his energy, especially if your dog is a high energy breed.

You would have to adjust the intensity and duration of the exercise depending on the breed and age of your dog.

Typically, a dog will need between 30 minutes to 2 hours of workout time daily. For a hyperactive dog, simple exercise such as a walk near the neighbor would not be adequate to make him tired.

You should also include games such as tug of war, playing fetch or flirt pole where your dog will need to exhaust his energy excessively to keep up with the play.

You can also incorporate some obedient commands during the play to stimulate his brain (as a form of mental exercise) or make use of toys stuffed with treats to let your dog think of a way to get the treats out.

Your dog will easily get tired out when he utilizes both physical and mental attention. Keep these in mind as you design activities for your dog to release his energy.

If you are sure that your dog will be safe from any potential harm and not creating any threat to others (because he is restricted in an enclosed environment), leave him alone to calm down.

Usually when the stimulus is out of his sight, he will be back to his normal self. Then you will think of ways to prevent him from being aroused by the stimuli again.

Of course, this approach of “leaving him alone” will not work if you are in an open area such as a dog park where you would certainly not want him to go around biting at people and other pets in the park.

In an open area, you would have to act decisively and make use of treats to get his attention and quickly get his sight away from the stimuli.

It is certainly not your dog’s intention to attack you but as the result of not being able to go after his target, he starts to get frustrated and needs to vent his anger to another target that he can possibly reach out to and with you beside him, you are his best target!

Did you encounter this situation whereas your dog is playing in the backyard and for no reason, he starts to bark at your neighbour new dog who is over the other side of your fence.

In this situation, if you approach him immediately, he might redirect his aggression to you. You should instead wait for him to calm down and reward him with treats as he remains quiet.

Then work on increasing the height of your fencing in the backyard so that your dog will not be able to see what is happening over the other side of the fence. This will keep his sight away from your neighbour’s dog and you should also start your dog on his socialization skill so that he knows how to react when facing any stimuli.

This would likely need time. You would need to closely monitor what causes your dog to be emotionally aroused and works on desensitizing your dog to these stimuli.

Go slow with the training and progressively increase the level of exposure once your dog is reacting well.

If you find your dog gets very aroused by fast moving animals such as cats or squirrels, what you can do is to train him to believe that it is of much better value staying beside you rather than chasing his stimuli. This can be done through rewarding your dog with a high value treat that he cannot simply resist.

Keep repeating this training and whenever your dog sees his stimuli and decides to stay foot and remain by your side, praise and reward him immediately.

This will create a positive reinforcement that he had made a right and sound decision and would love repeating that behavior.

Did you also encounter the situation where your 2 dogs who used to get along very well, turn aggressively and start barking and growling at each other whenever your doorbell rings?

This is a common redirect aggression behavior from a dog when he is not able to reach out to what is behind the door and vents his frustration to another dog beside him.

You can accomplish this by making your dogs feel that you are more valuable to them than rushing to the door when the doorbell rings.

This can be done by rewarding them with a high quality treat whenever they perform this behavior and gradually they will associate this action of looking for you with positive experience.

Get Help From Animal Behaviorist

If you have done what you could and your dog still shows signs of redirect aggression, you might want to consider seeking help from an animal behaviorist.

He will be able to provide you with more in depth guidance and technique to help you understand your dog’s aggressiveness behavior and advise on the ways to correct them.

As you have learned from this post, it is possible to eliminate your dog’s aggressive behavior through understanding the stimuli that arouse his anxiety or fear and alter his behavior towards the trigger.