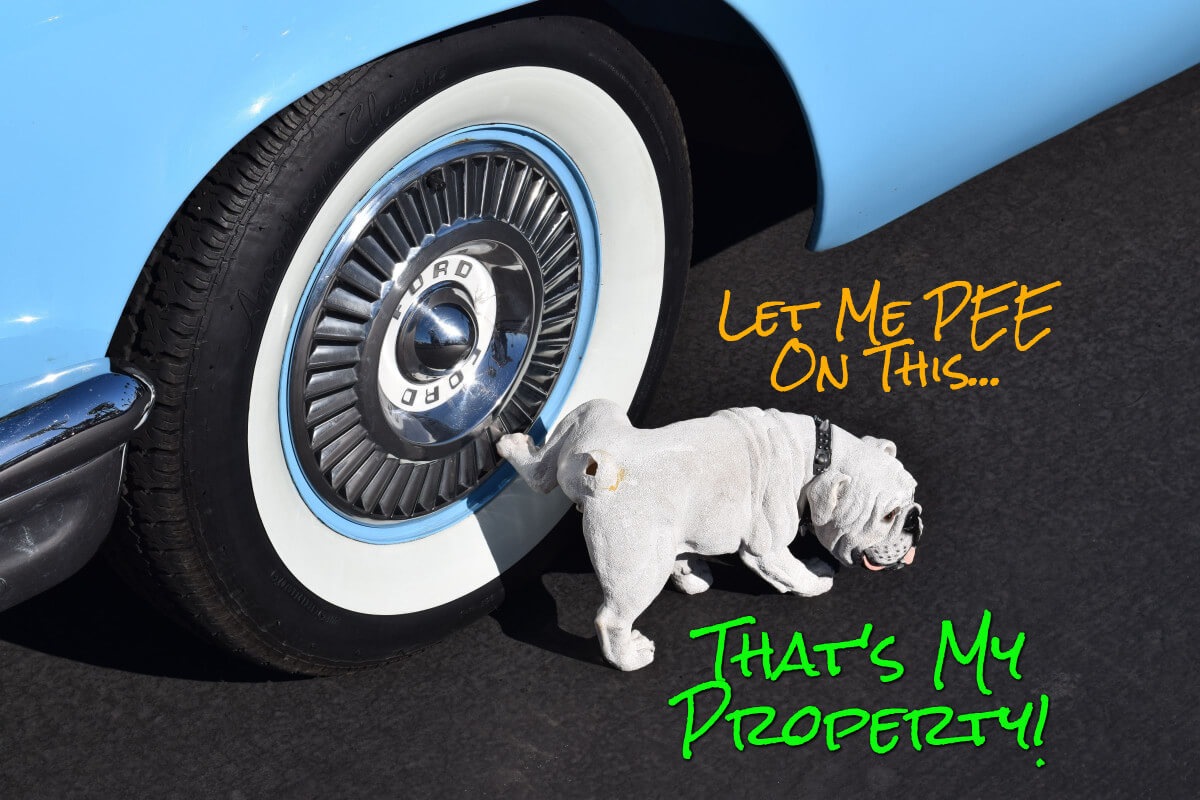 You wake up in the morning to find your dog’s urine all over your car’s tires.

The smell and mess is awful, and you spend almost an hour cleaning it up.

This makes you wonder why he is not doing his potty in the designated spot?

Your dog is peeing on tires because the intriguing blend of scent from them is too irresistible, and he wants to claim his ownership. He wants to communicate with his pack in the outside world and knows that peeing on tires will send his scent far away. He is reclaiming his territory as he finds his scent is gone!

An Intriguing Blend Of Scent Captivates His Desire

When you walk past a bakery shop and smell that sweet and yeasty aroma of the freshly baked bread, would you not be tempted to take a bite?

That is exactly what your dog experiences when he walks past your car.

The enticing blend of scents from the tires are like a dessert for his nose.

It is blended with the scent of all his favorite “foods” such as soils, mud, urine, feces, dead bugs and garbage that he simply cannot resist.

He would want to “own” it and mark it as his property.

And his way of doing it will be to pee on it to let everyone know that this is his territory.

He feels that he has the right to own that space and does not want anyone to go near it.

This is a form of territorial marking behavior that you will need to correct your dog and teach him that this is not his property.

Certainly you would not want to spend tons of time and effort to wash your car’s tires when he keeps doing that marking behavior!

He Wants To Communicate With His Pack Who Is Far Away

You may find it hard to believe, but your dog knows that peeing on a tire will send his scent FAR away from home.

He knows that the car will be out on the road every day and when he pees on the tires, his urine will be “picked” up by many of his packmates out there.

The car will ultimately be back home at the end of the day, and he will be able to do his smelling on these tires to find out the “reply” from his packmates.

He knows that they will be peeing on these tires to let him be aware of their presence.

This is his way of communicating with his pack who are far away from him.

The concept is similar to a dog doing his marking in the wild (as a form of communication) and, since your dog is not allowed to roam freely outside your house, he has to communicate with his pack in this way.

As your car will always be on the move, it is inevitable that there will be many dogs doing their territorial marking on the tires.

That will mask the urine scent that is left by your dog and make him feel that he had “lost” his territory.

To reclaim his ownership of this property, he will try to mark it again by urinating on the tires.

This “reclaiming cycle” will keep on repeating till you have corrected your dog’s territorial behavior or make it difficult for him to get near the car.

You can have your car locked in your garage or put some mothballs around the area near the car’s tires.

The “irritating” scent of the mothballs should keep your dog away from the car.

To Take On Larger Territories

Your dog is certainly much smarter than what you think he is.

He knows that by peeing on something that can travel far, that will help him to claim larger territories.

And, of course, your car will be his primary choice, as he knows how far a car can go.

He gets to know the travelling distance of a car when you have taken him out for a car ride!

By marking his territory on the car’s tires and having his scent sent over a long distance, it will surely attract other dogs that are on the lookout for his scent.

This way, he will be able to assert a larger territory by using the car to send out his odor.

To Establish A Place For Himself

When your dog finds a spot or thing that keeps having different dog’s scent regularly, he will start to believe that a lot of his pack members actually “live” in that territory.

He will then want to join this “family” and to do that, he will pee on it to secure a place for himself in that population.

As car’s tries is the “TOP” target for all dogs to claim their ownership (due to its intriguing blend of scents), it is of no wonder that they are stained with all sorts of dog’s urine.

These different dog’s scents on the tires will arouse your dog’s desire to join that group, as he feels that is where he should belong.

This is when he will start urinating there.

You have changed new tires recently and the strong rubber smell from these tires is attracting your dog’s nasal curiosity.

He finds the scent of the tires to be “engrossing” and the more he sniffs and licks on them, the more he wants to own them.

In fact, your dog finds the scent of the tire to be so irresistible that he is not willing to leave the car for any minutes.

To possess it, he will pee on it to claim his ownership.

It can take up to a week for the smell of the new tires to go away.

What you can do is to have your car locked in your garage to keep your dog from reaching it.