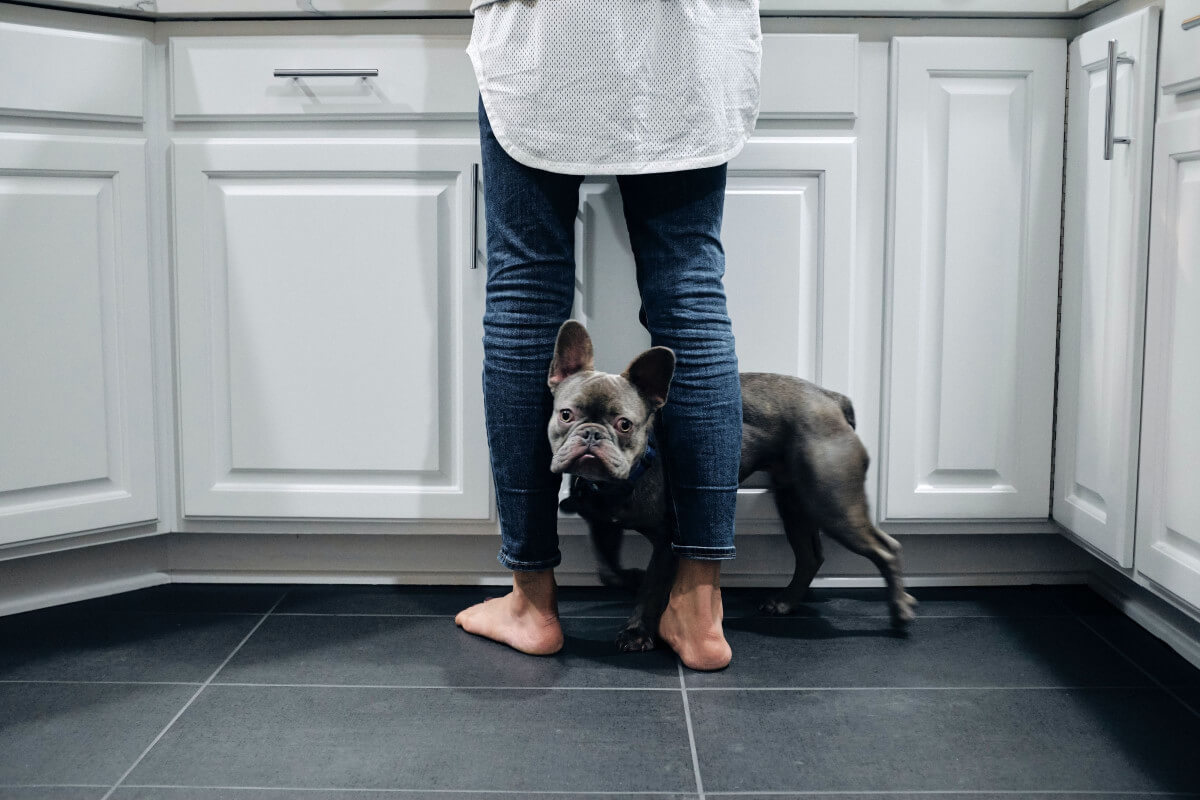 Do you know what causes your dog to run through your legs? That’s not because you’re wearing shorts or have hairy legs, it’s because of your scent.

Your dog has an acute scent of smell and the odor on your legs attracts his curiosity.

But is that the only reason for your dog to run between your legs or is there more to that?

Your dog is running through your legs because he is curious about the unfamiliar scent found on your feet and is carrying out his investigation. He is suffering from zoomies (as the result of boredom, excitement or over simulated) and this makes him run around your legs. He is fearful of his surroundings and wants to seek your protection.

Curious About the Odor on Your Legs

Dogs have a natural curiosity about their environment. They want to know what’s going on around them.

He may also be just trying to explore the abnormal scent that is on your legs.

Maybe you are just back from a workout and your stinky feet are “giving” out the odor that is attracting his curiosity.

He carries out his investigation by running between your legs and getting close to your foot. He wants to smell it and see what it is.

Or it could be the case that he had a cut on your legs which you are unaware of and your dog is trying to show his concern by running around your legs.

He may be trying to figure out if you are okay.

When your dog is experiencing zoomies (also known as Frenetic Random Activity Periods), he will run around the house frantically in a figure of 8 or simply run in between your legs in circles.

The reason why he runs around in the figure of 8 is because this pattern prevents him from being easily chased by his predators.

Furthermore, he had inherited a natural instinct for herding from his ancestors, which involved running in figure 8 to control the flock.

Thus, when your dog is having zoomies, he’s likely to be moving at a fast pace with his body in an upright position.

He may be pacing back and forth or making a figure of 8 movements.

Zoomies are usually short-lived behavior and last only a few minutes.

Here Are Some Common Causes for Zoomies:

Excessive excitement: When dogs are excited, they tend to have a lot of energy and are prone to zoomies. They have so much energy, but they don’t know what to do with it. That is when they will choose to run in circles or weave between your legs.

Over stimulation: Some dogs are highly sensitive to noises or sights. This can make them anxious, and they may exhibit zoomies when they’re overstimulated.

Fearful: Dogs can also become anxious when they see something that makes them afraid. Zoomies may be a result of their fear response. Your dog may be hiding around the house or going between your legs because he’s fearful of something. You can help him to calm down by distracting him with toys or treats. If you notice that your dog is zooming around, it’s important to keep an eye on him. This behavior can escalate into a more serious problem, such as aggression.

Lack of exercise: A bored dog will often be more prone to zoomies than an active one. If your dog is having a hard time releasing his pent-up energy, this excessive energy in his body will be directed towards his zoomies behavior. So it is important to control your dog’s energy level and make sure that there is an outlet for him to release them.

Lack of attention: Dogs thrive on attention, and they can get bored easily when they are neglected. In most cases, dogs will zoomies if you don’t pay attention to them when they need it. The best way to keep your dog occupied is by keeping his attention focused on something. This could be a toy or a favorite game. Dogs enjoy having things to play with, and toys are a great way for your dog to exercise and relieve his boredom.

Separation Anxiety: Your dog doesn’t want you to leave him alone and is trying to prevent you from leaving the house by running between your legs. This is often a sign that he is anxious about being left alone.

If you see zoomies happening frequently, talk to your veterinarian. They can help you to determine what’s causing the behavior and provide treatment options.

Getting Your Attention Is His Goal

Dogs like to play and run and if you have not provided an outlet for your dog to let off his pent-up energy, he will most likely become destructive and start chewing on your furniture, shoes or clothing.

And when he sees you around, he will wrap his paws over you and keep running through your legs as he wants you to know his present and take him out for a play.

So make sure that your dog has an outlet to release his excessive energy to keep him physically and mentally simulated.

Physical games such as fetch, tug of war or even just running in the backyard with him will keep his energy in check.

Mental games such as solving a puzzle game, getting a treat out from a KONG toy as well as obedience training are great ways to keep him mentally simulated.

He Is Seeking For Your Protection

A dog that lacks confidence and is not well socialized will often exhibit signs of fear and anxiety in the presence of the unknown.

This is when you will find your dog going between your legs or standing behind you to seek your protection. He looks upon you as his Alpha and depends on you to keep him safe from any harm.

He may also exhibit his stress by persistently licking his paws, panting, drooling, and yawning.

These behaviors are usually displayed when your dog is seeing something new for the first time, such as visiting a new home or facing a more dominant dog.

As you are the ONLY one that he trusts, he will keep himself close to you and stay between your legs. He is seeking your protection.

This is why it is important that you start your dog on socialization training to build up his confidence level, and he will be much calmer when facing a new situation.

You Had Encouraged This Behavior in Him

Dogs don’t do this on purpose, but it’s often a sign of affection.

When your dog runs through your legs, he is just trying to feel good and be with you. He likes the warmth and the attention that you have given him for this act.

This is especially so if you have been petting and rewarding your dog when he performs this activity.

He will associate that behavior with a rewarding experience and will love doing it over and over again.

And once he’s getting the idea that you like what he is doing, he’ll keep doing it.

So, be mindful of your encouragement. Only positive reinforcement the behavior that you want your dog to learn and repeat.

He Is Demonstrating His Dominance

Some dogs are so excited that they will run through your legs, but others have a more sinister motive. If you notice your dog repeatedly running between your legs, this may be a sign of dominance.

He will often go between your legs when you are standing, sitting, or lying down.

He is telling you that this place that you are occupying right now belongs to him, and he wants you to leave that area immediately.

He might also exhibit signs such as growling or barking at you as he wants to protect his territory.

To correct his dominance behavior, you will have to make him acknowledge you as his pack leader and make him know that you own everything he has.

He has to be dependent on you for his basic needs, and you will be the one who decides where and when he will eat, play and sleep.

He needs to understand his role in the family.

You can do this through obedience training and make him follow your commands and know your expectations of him.

A great way to teach your dog basic obedience is through clicker training. The way this training works is to make your dog learn to associate certain desirable behaviors with a “click” sound.

It may take some time for your dog to understand the meaning of the click, but once he does, it will be much easier to teach him new things.

It is important to work with him on the training every day.

You need to be consistent in your commands and gradually your dog will start looking up to you and acknowledging you as his pack leader.

Your (Female) Dog Is In Heat

It is generally believed that the act of pushing or running through human legs, mounting on other dogs, humping on toys, pillows or blanket is driven by a dog’s sexual arousal.

If you have a dog that constantly runs between your legs, it is probably because she is in heat.

This is a natural instinct in dogs. A female dog will go into heat every 6 months. During this time, she will have periods of wanting to mate with male dogs.

It is common for a female dog’s vulva to become large and swollen when she is in heat.

It can grow three to four times larger than before, but it isn’t painful. The swelling can last from two to four weeks, but should go away when your dog is no longer in heat.

So keep a lookout for the above symptoms if you are suspecting your dog is in heat.

Spaying your dog will prevent her from getting into heat. Ideally, this spraying should be done when she is about 6 months old.

It’s His Way Of Alerting You

Your dog may have sensed something unusual in his surroundings, and he is trying to warn you.

It could be the case that he had smelled the presence of a snake in your house and was trying to alert you.

He may even start barking in the direction where the snake is hiding as an attempt to let you know about its presence.

As your dog possesses an acute sense of hearing and smell, he is certainly able to warn you of any danger.

So, you should always take note of what is going on around you if your dog suddenly reacts in an unusual way, such as repeatedly running through your legs and barking at you.

There could be something going on around your house.

His Excitement Is Growing

Dogs are naturally curious. They want to know what is going on around them.

If there are a lot of people, activities, and odors in a room, it’s only natural for your dog to get excited and run between your legs.

He is telling you that he wants you to take him around so that he can explore his surroundings.