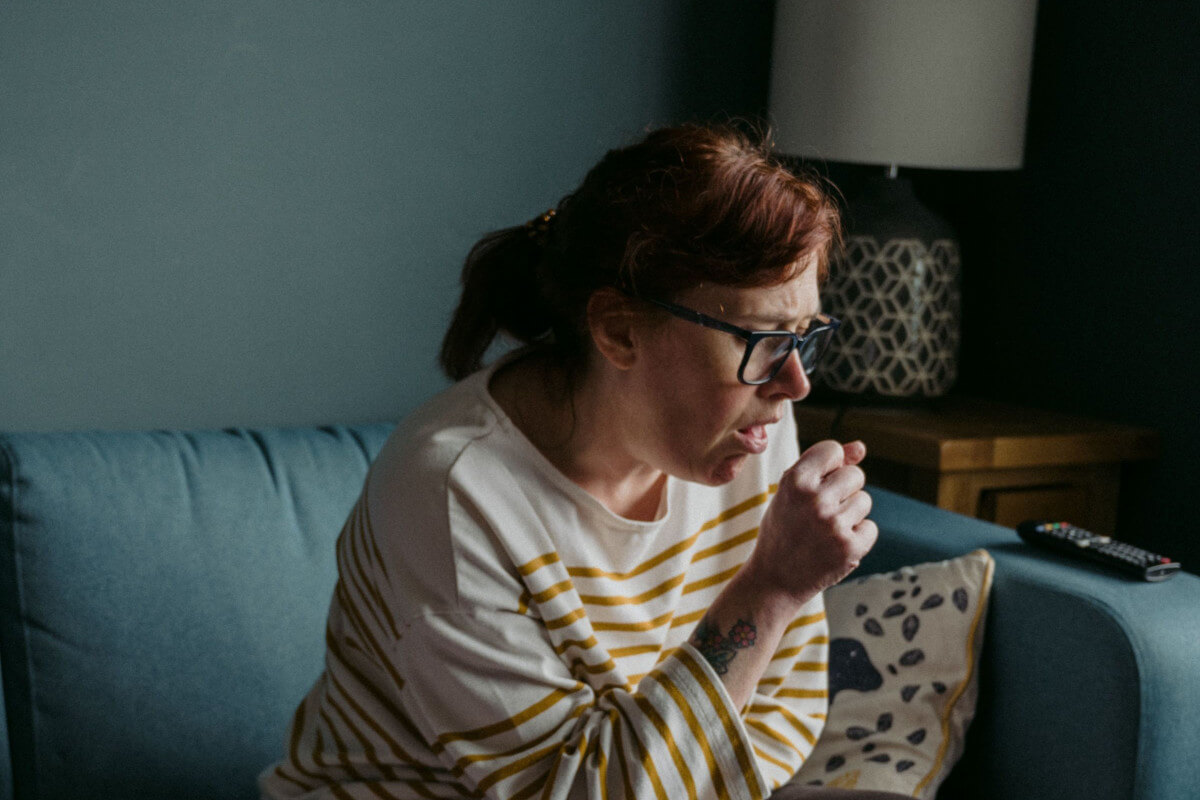 Your dog loves to be with you all the time, but when you cough, he runs for his life. This makes you wonder why he is so fearful of your cough?

You will want to find out the reasons, since it is inevitable that coughing will happen at any time in your life.

Let’s read into his mind to know more about his thoughts on coughing.

The Foul-Smelling Scent Of Your Cough Scared Him

A cough serves as a natural defense response that defends your body from irritating substances, such as dust and dirt.

As soon as something irritates your throat or airways, your nervous system will signal your brain to contract your chest and abdomen muscles and expel a burst of air to get rid of any foreign substances that are present in your upper respiratory.

This burst of air comes with a scent that frightens your dog as it is not the usual smell that he is familiar with.

What goes through his mind is that he hears your coughing, followed by the scent of the droplets from your cough.

This brings back his thought that this episode resembles a thunderstorm where he will hear thunder sounds followed by the scent of rain in the air.

And as you probably know, most dogs are scared of thunderstorms and this similar happening intensifies their fear.

Your Unusual And Sudden Sounds Of The Cough Frighten Him

Your dog is confused by the various different sounds of your cough and this freaks him out.

Your cough can be in the form of a wet or dry cough, and they provide different sounds that could potentially frighten your dog.

Wet cough: The coughing up of mucus from your respiratory tract makes it sound “deep” as mucus moves through the airways.

Dry cough: Often referred to as a hacking cough, this type of cough has a consistent “flat” sound because there is no mucus in the nasal passages.

The fright will intensify when your dog is letting off his guard (as he sees you as his pack leader and feels safe to be with you) resting beside you and, unexpectedly, a sudden sound from you startles him.

He was not expecting this to happen and was not prepared for that. This causes him to react in fear and run away from you, especially with an unexpected sound that he cannot identify.

Though the sound of a dry cough will not be as alarming as a wet cough, you can still be sure that your dog will be wary of any surprising sounds even when he is far away from you.

This is because he possesses an acute sense of hearing and can pick up any subtle sound that is as far away as a quarter of a mile.

Any jarring noise, especially one he cannot identify, will likely cause him to flee. This is his natural instinct to protect himself from any harm.

Your Cough and Sneeze Tell Him Something You Don’t Know

You may be surprised to know that dogs are able to smell the presence of COVID in the human body.

He could have detected the COVID virus that is present in your body as you cough and sneeze.

A recent study used a dog’s nose to detect COVID-19, and it was found that the dog can detect the presence of COVID-19 in the clothing and masks of people with mild or symptomatic SARS-CoV-2.

Researchers also showed that dogs are able to detect the presence of COVID-19 in the saliva or sweat of the patients.

So, it is evident that dogs who have a much more sensitive nose than humans are capable of detecting viruses present in the human body.

Thus, it is not a surprise for your dog to react in fear as he senses the presence of a virus in your body.

He Perceives Your Cough As “Shouting” At Him

Your dog is afraid of your coughing because he sees that as a form of your aggressiveness.

He perceives the sudden, loud and harsh coughing sound from you as an intimidating tone, shouting at him.

In his opinion, you are getting angry at him and are showing your irritation by “shouting” at him.

That makes him turn fearful and tries to get away from you. You may also see him hiding in one corner of the house or getting into his crate with a shivering body.

This is because the sound that your vocal cord makes in your cough is shrill and harsh and your dog is likely to misinterpret that as aggression.

You will need to train him to perceive your coughing as a normal body reaction.

As your dog ages, his sense of hearing will start to deteriorate and fail. He will lose his acute hearing capability that he used to possess when he was in his youth.

Due to that hearing impairment, any abrupt, jarring noises such as your cough can be shocking and frightening to him since he is used to a quiet and silent environment (because he can’t hear sounds that are too soft).

Thus, if your dog is more than 10 years old, be aware that his hearing will start to deteriorate and that he might start stuttering when he hears your cough.

You can take him to see a vet for a hearing check. In the event that your dog is found to have hearing loss, you will need to know how to help him.

It is common for a dog diagnosed with hearing loss to need hearing aids.

He Had Associated Coughing With An Unpleasant Experience

It is possible that your cough is triggering some sort of trauma that your dog had experienced when he was still a puppy.

This unpleasant experience may set him off as he perceives coughing as a sign of bad happening.

As such, when he hears that sound, he is afraid that bad things are going to happen.

It could be the case that his previous owner, who he loved so much, had passed away after persistent coughing for months.

This makes him feel that when he hears coughing, he may lose someone that he loved so much and this triggers his fear and anxiety.

He Suffers from Noise Phobia

Your dog is afraid of your coughing because of the ear-piercing sound and the suddenness of the noise.

When you are coughing, you are emitting a high-pitched sound which is very similar to a bark and if your dog is suffering from noise phobia, this freaks him out even more.

You will find your dog reacting fearfully to any sounds, no matter how subtle those noises are, such as the opening and closing of a door or turning on a fan, when he is suffering from this disorder.