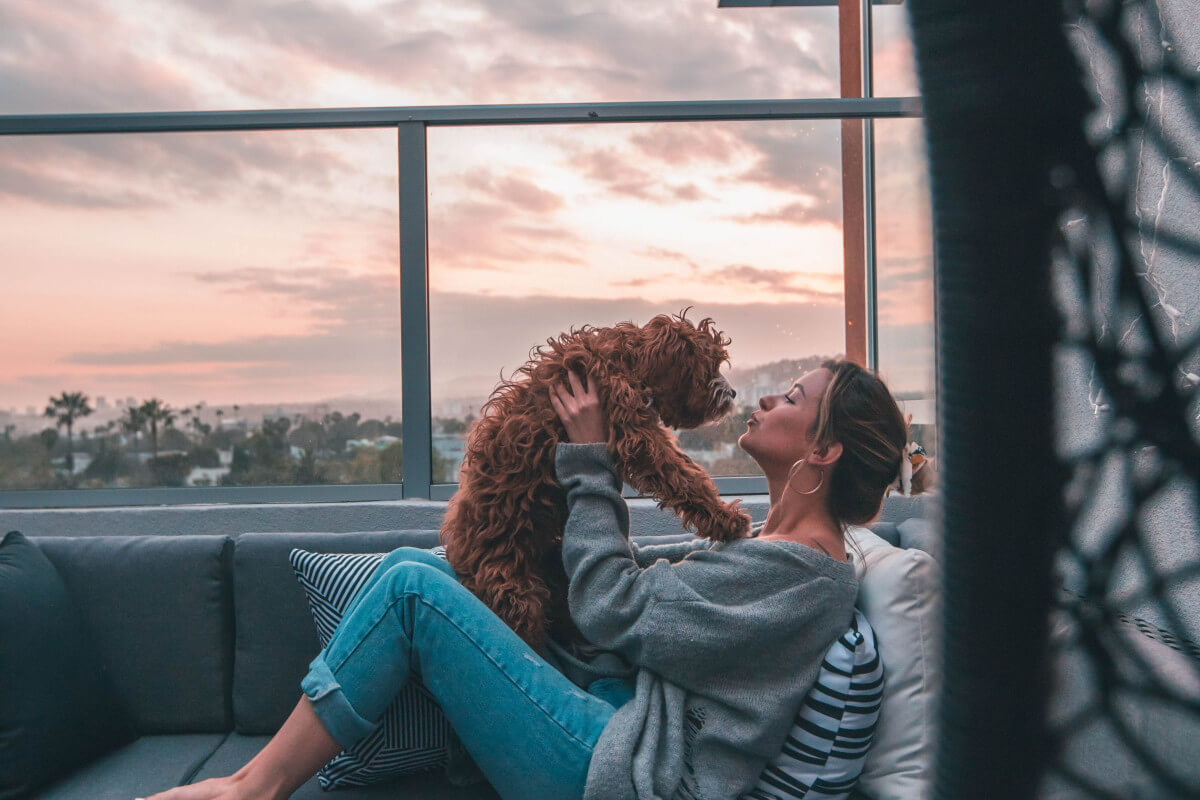 It has become a habit for my dog to stand over me when I am watching television. However hard I try to get him to sit, he simply ignores me. This is a frustrating situation because he is obstructing my view.

This makes me wonder why he is doing this?

Is it just that he enjoys being over me? Maybe his previous owner had made him associate this act with a rewarding experience or is it just his nature?

Let’s read on to find out more!

Your dog is standing over you because he is trying to establish himself as your pack leader. He feels unsafe in his environment and depends on you for protection. Unknowingly, you have conditioned him to behave in this manner. He seeks your assistance to address his needs. His aim is to get your attention. He has a sense that you are ill.

He Is Trying To Be Your Alpha

It is possible to tell a lot about how a dog feels about the status or rank in his pack by observing his behavior.

If your dog keeps his head above yours while you are lying down or standing over you while you are sitting, he might be asserting his dominance over you.

Likewise, if he places one of his paws on your shoulder while you’re sitting, and attempts to nudge you, this could indicate he is trying to gain control over you.

Also, keep an eye out for any of his aggressive behaviors with other dogs or growling when someone gets close to his toys or food.

Be on the lookout for these behaviors, especially if they’re a little out of the ordinary.

This is a sign that your dog is being dominant and trying to establish his position as the leader of the pack.

In this case, you will need to start him in obedience training and work on making him see you as his Alpha.

He Is Looking For A Safer Spot

Often, a dog’s actions are prompted by his own safety and well-being.

Your dog is standing on you because he feels uneasy with his surroundings and is relying on you for protection.

As it turns out, you are acting like a “safety net” for him when he is directly on top of you and this makes him feel protected.

So, if you suspect that your dog is acting in this way out of fear, observe his behavior when he stands over you.

Is he trembling, stiffening, growling, licking his nose, whining, or yawning?

And if you make him go away, does he retreat back to his crate or hide under a table?

This may cause him to become fearful and lean on you for protection.

You Have Unintentionally Conditioned Him to Do This Behavior

There is a possibility that you have unknowingly trained your dog to do this behavior.

Have you been rewarding your dog by giving him treats, petting and special attention when he stands over you?

This makes him associate his action with a rewarding experience, and he will enjoy doing it whenever the opportunity arises.

You should ONLY reward your dog when he engages in good behavior, and to draw his attention to something else, such as his favorite toy,  when he is about to climb over you.

It may be hard for you to reject your little puppy when he starts climbing on you, but if you permit him to do this, it will become a learned behavior and will be difficult to correct later on (especially when he has grown up).

He Wants Your Attention Because You Have Neglected Him

Have you been neglecting your dog lately because you are too busy with your work? Your dog is probably lonely and needs your attention.

There is no doubt that dogs need to be loved and cared for, and they may feel abandoned when they do not get the attention that they crave.

This is when your dog will use his way of drawing your attention back to him by acting out.

He may start to bark a lot, jumping on you, standing over you, chewing on your shoes, eating poop or doing things that he knows will attract your attention.

What you can do is to provide him with some activities that he will find entertaining. It can be as simple as providing him with chewing toys or puzzle games to keep him occupied.

You can also take him for a walk or allow him to run in the garden to let off some of his pent-up energy.

According to an old saying, “A tired dog is an obedient dog” and this certainly applies.

When your dog gets to release his excessive energy in his body, he will feel better and will not be clingy to you for attention.

There Is Something He Needs from You

It is possible that your dog is standing over you in this instance because he is in need of your assistance.

This may include he needs a potty break, he is feeling hungry, he is asking you to take him out for a walk, he wants you to play with him or any combination thereof.

If your dog does this behavior at certain times in the day, you should pay close attention to it.

In this way, you will be able to see if his behavior corresponds with his hunger, or if you are overlooking the need that he has to go potty from time to time.

It could also be the case that he is feeling lonely and there is nothing he can do to keep himself occupied.

Dogs have incredible senses, including keen eyesight, acute hearing, and a sense of smell that is unquestionably superior to that of humans.

The fact that your dog has the ability to smell things that you cannot detect makes him extremely responsive to changes in his environment.

Clearly, he senses your unwell and is trying to determine how you are doing as he stands over you.

It has been proven that dogs are able to detect cancers in humans before doctors can diagnose them. Therefore, it is not surprising that your dog can sense when you are not feeling well.

Dogs are highly perceptive of their owners and often try to discern what is wrong with them. Since they are able to sense things from a distance, they know when something is amiss.