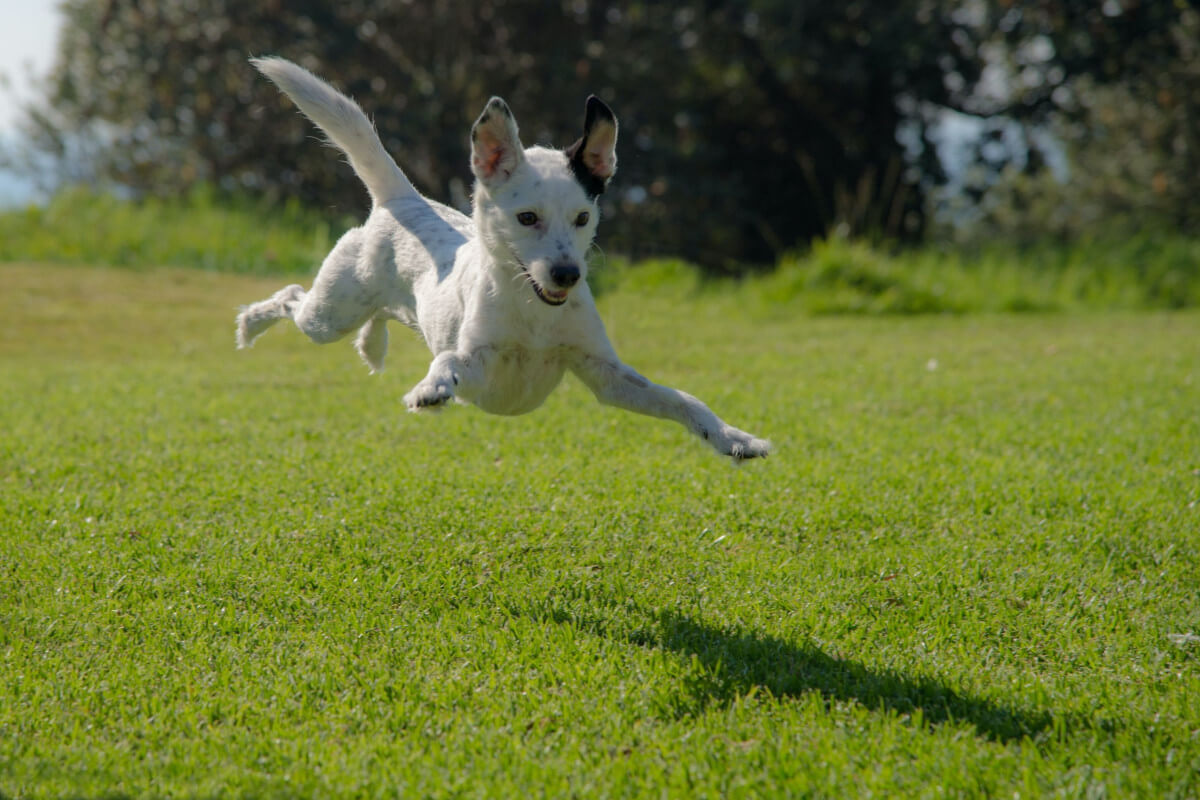 Zoomies, often known as “Frenetic Random Activity Periods (FRAPs)” or “running in a circle or figure of 8”, occur when dogs become extremely excited and cannot calm down.

They will also exhibit other behaviors such as chasing their tail, spinning in circles, or even barking and jumping around.

It doesn’t mean that your dog is ill, but rather that he has become so stimulated that he is unable to stop himself from running around.

There are many causes for zoomies such as natural herding instinct, boredom, excitement, anxiety, a sense of overwhelm and even out of fear.

Natural Herding Instinct Makes Him Run In This Pattern

If your dog belongs to herding breeds such as border collie, cattle dog and sheepdog which have been bred for their herding instincts over generations, he will possess an inborn instinct to gather, herd, and protect livestock.

This herding instinct makes your dog love to run in a figure eight pattern as it will help to keep the flock in place.

The herder will call out a command to the dog and that will make the dog run in a figure eight pattern to herd the flock.

The figure-8 pattern which is used to herd animals, consists of a series of figures that are connected to each other. Each figure has its own meaning.

Anxiety and Fear Are Overwhelming Him

If you see your dog running in a figure eight pattern, it may be because he is trying to avoid something that he is afraid of.

When this happens, he may start to zoom around in a circle. It’s a sign that your dog is very scared or anxious and that he’s not socialized well and will need more training.

Figure 8 zooming is a behavior that is related to a dog’s flight instinct. Your dog might have perceived something of a threat to him and that triggered his instinct to flee.

And the reason why he runs in a figure 8 is because it is the fastest and safest way for him to get away from a perceived threat.

This is a defensive strategy that dogs have used since wild times to keep their predators from catching up with them.

That is why you will see dogs often running in a figure eight when there are predators coming after them.

This means that the predators chasing them will have to keep turning around to follow them, making it much easier for them to get away.

He Is Feeling Bored And Too Energetic

Dogs often go through the zoomie behavior when they feel that they are missing out on something they want to do. This can be anything from playing with their toys to going for walks or playing in a dog park.

This is often the case when your dog has too much pent-up energy and there is no outlet for him to release his excessive vigor.

You will find him running through your legs, chewing on objects, digging the garden and pacing up and down the stairs.

If your dog is experiencing this kind of behavior, you should plan for some physical and mental simulation exercises to assist him in releasing his surplus energy.

Games such as tug-of-war, flirt poles, playing fetch, hide-and-seek and chasing bubbles will help him channel his energy.

You can also incorporate some obedience exercises to strengthen his muscles and keep his mind busy. These will help to simulate his brain and keep him mentally tired.

Keep in mind the breed, age, size as well as the health status of your dog when you are planning these physical activities for him.

You do not want to overexert your dog. This is especially so if he is still a young puppy and his growing body is not fully developed or if he is reaching his golden age and is suffering from arthritis related discomfort.

Zooming can be caused by over stimulation. A dog with hyperactive behavior will often zoom in response to an external stimulus, such as discovering new things, smell, or sight.

He will feel stressed and fearful when he sees something that he has never seen before or when he finds himself in an unfamiliar environment.

That is why you will see your dog running in a figure of 8 when you take him out to a new park that he has never been to before.

Or if you have recently renovated your home, the unfamiliar scent and sight may cause him to start feeling overwhelmed or stressed and that leads him to zoom in and out of the house.

Dogs may also experience zoomies during specific times of the day, such as after they have woken up in the morning (having excessive pent-up energy after a night of rest) or after having spent much of their day in their crates.

It is common for dogs to get zoomies after having their baths, or when they are stressed, such as when they know that you are going to take them for grooming.

Zoomies can affect dogs of all breeds and ages, but it more frequently happens to puppies and young dogs.

Dog Runs Around In Figure 8 During Playing

We all know that dogs love to play. Dogs run around in figure eights to keep up with each other when playing. They enjoy chasing each other and playing catch up.

It is thought that running in a figure eight is a good way for your dog to practice his hunting skills, which in this case is to go after (playing) with another dog.

Dogs are not only playful, they also have a lot of energy. They need to release it in some way and running in circles during their play gives them a chance to burn off that energy.

Medical Issue Such As Neurological

In some cases, it can also be a sign of a medical condition such as seizures, head injury, or other neurological problems.

So, if you suspect your dog is experiencing any symptoms that seem to be connected to the above-mentioned conditions, you should consult with your veterinarian immediately.

This will allow the vet to perform further tests and determine the best course of action to take.