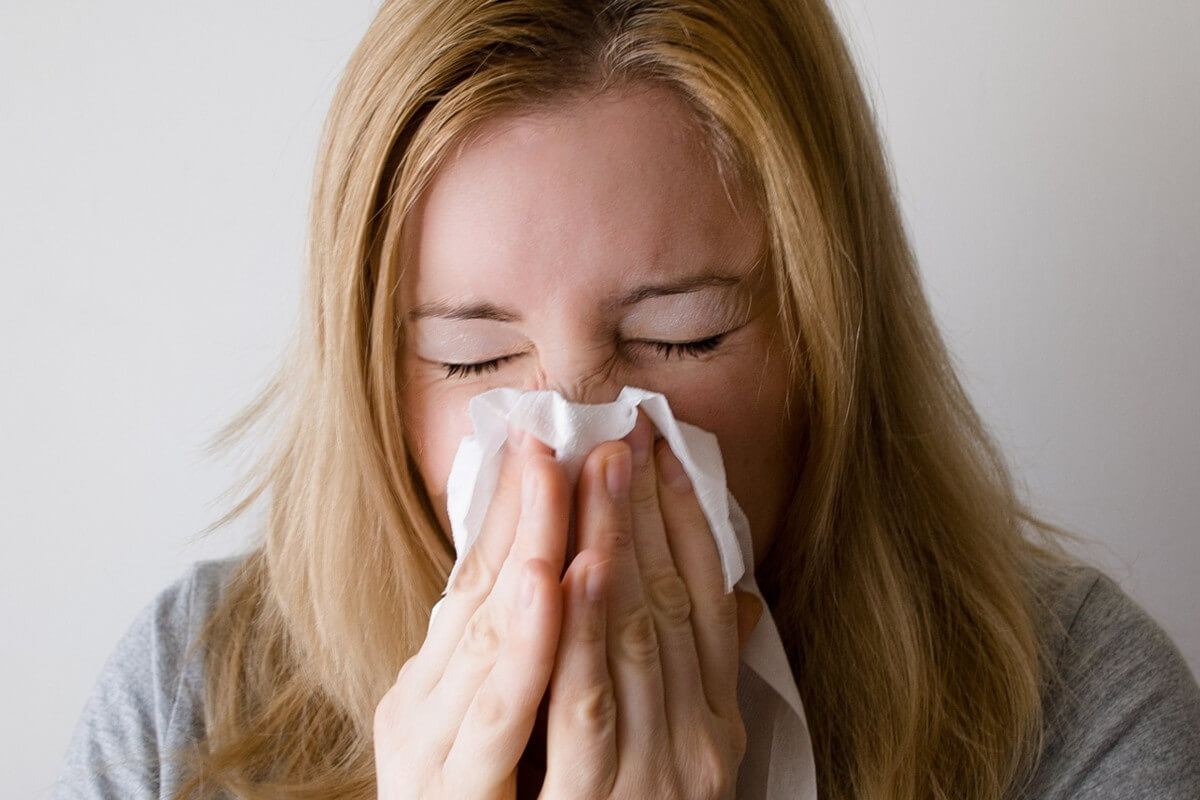 You may have noticed that your dog looks absolutely terrified when you sneeze. He will stare at you with his big, brown eyes and a trembling body. This “sneezing” seemed to be quite a frightening experience for him.

His erratic reaction makes you wonder why he looks so scared when it is just a simple sneeze?

Your dog is scared of your sneezing because he is startled by the sudden rowdy sound. The unfamiliar odor from the sneezing makes him nervous. He associated your sneezing as an invitation for him to play with you, which he hates (as he is suffering from arthritis). He was terrified of sneezing after his traumatic experience.

He Is Startled By The Sudden Rowdy Sound Of Your Sneeze

Sneezing often comes as a surprise and that certainly is not an enjoyable thing for your dog, especially if he is just beside you.

The sudden happening catches him unaware and, due to his superior’s hearing, he is shocked by your act.

You see, a dog’s sense of hearing is four times more sensitive than human hearing, so they can hear at a distance of about 80 feet whereas we can only hear at 20 feet.

In other words, dogs can hear sounds that we cannot hear.

That rowdy sneezing sound that you let off resembles the sounds of thunder or fireworks and that triggers his fear and anxiety.

To your dog, that’s a terrifying experience, and you will see him running away from you and hiding in his crate.

The Unfamiliar Odor From Your Sneeze Makes Him Fearful

Dogs are naturally sensitive to smells. Their sense of smell is more acute than ours.

When you sneeze, the air that you have expelled from your nose and mouth is filled with small particles (droplets).

These droplets can travel up to two meters when you sneeze, and they come with a distinct smell.

That is why you will notice a lingering odor after you sneeze, and that odor is certainly going to make your dog turn nervous as the scent seems to appear out of a sudden after the rowdy sneeze.

He will be startled and run away from you. As soon as he is back with you, he will begin to lick inside your nose to find out what is causing the odor.

When you sneeze, your dog takes it as a signal that you want him to play with you.

This is typically what happens in the dog’s world. A dog will invite another dog to play with him by “play sneezing”.

And if your dog is reaching his senior age (which is usually more than 10 years old), he will dislike any physical activity that needs him to move around.

This is because he is suffering from arthritis or other joint related discomfort. You will find him to be less active and no longer interested in things that he used to enjoy.

He likes to stay in one corner of the house, and avoid going up any stairs. In severe cases, you will see him having a hard time walking.

Thus, whenever he hears you sneezing, he will immediately flee away as he is not keen on any playing except resting on the floor.

He Suffers from Noise Phobia

A dog with a noise phobia attempts to flee from a sound out of an intense fear of it.

Dogs can develop this irrational, overwhelming, and extreme fear reaction towards sounds at any age and regardless of breed.

So, if your dog is suffering from this disorder, it is his natural instinct to seek refuge when he feels threatened by your sneezing noise or coughing sound.

You will also find him overreacting to sounds which do not pose any threat, such as the sounds of a vacuum cleaner, ceiling fan, air vent or plastic bags.

The following are signs that your dog may have a noise phobia:

1. He’s constantly looking for a place to hide, and his tail is between his legs.

2. He gets nervous and restless and hides in his crate, bathroom or under furniture when he hears any noise.

3. He growls, barks, or yelps when your phone rings or when you are playing loud music.

If your dog develops noise phobias, you should seek immediate medical attention as he may begin barking non-stop, hiding in a corner, or even attack you.

Dogs with noise phobias are usually sensitive to certain noises and situations. This sensitivity is usually learned over time.

The most common cause for developing noise phobia is previous experience with the sound that causes the fear.

It is not unusual for dogs to be fearful of fireworks, thunder, fire alarms and other loud noises.

Your dog could have experienced some trauma happening associated with human sneezing when he is still a puppy.

That triggers his fear and anxiety and sets him off whenever he hears someone sneezing.

For example, he could have been ill-treated by someone who keeps sneezing and that makes him believe that something bad is going to happen whenever he hears that sneezing sound again.

You will need to help him overcome that fear through training and conditioning.