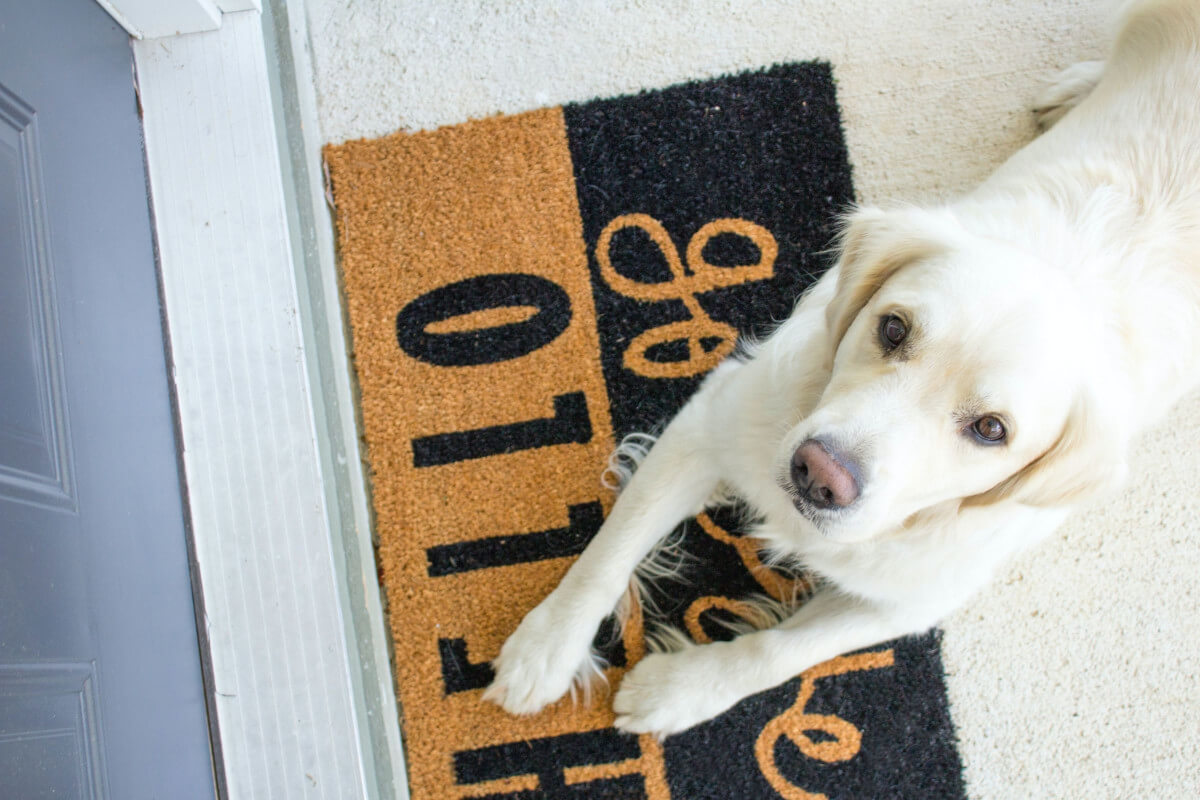 You have given your dog a comfortable couch to rest on, but he seems to prefer sleeping in the doorway.

This makes you wonder what makes it so appealing for your dog to sleep in that cold and hard doorway? Why did he not choose to lay down on the soft and comfy couch instead?

To know the reasons, let’s read into your dog’s mind.

Common explanations include he is performing his guarding duty, he finds it to be a rewarding behavior, he is curious what’s happening behind the doors as the sound and scent captures his attention. He likes the cooling sensation near the doorway, or he is telling you that he needs to go out.

He Is Performing His Guarding Duty

Dogs have inherited instincts from their wolf ancestors, and members of their pack will always keep an eye on each other.

That explains why he is sleeping in the doorway, as he knows that it is the entrance to the house and by guarding this spot, he can alert you if unfamiliar people break into the house.

This is especially so if your dog is a protective dog breed such as German Shepherds, Rottweilers or Doberman Pinscher.

It’s his natural instinct to protect you and your family from any intruders. He is doing his job as a guard dog and feels proud of his actions.

He Finds Sleeping On Doorway To Be Rewarding

You have unintentionally made your dog find it to be a rewarding experience staying in the doorway.

This could be the case that your dog knew that this (doorway) would be the entrance that everyone who was coming home had to pass through.

Hence, when the end of the working day came, he would sit and wait patiently at the doorway so that he gets to greet everyone that is coming back home after work.

You would probably pat him when you walk through the door, and that makes him associate being at the doorway with nice things coming his way.

He Is Curious What Is Happening Behind The Door

There are attention – grabbing sounds and scent coming in from the nice little gap underneath the doorway and that certainly makes your dog excited.

He wants to know what is happening behind the door and to be the first one on the scene. Those desires are so strong that they motivate him to stay away from his cozy couch and remain in the doorway.

You see, many interesting things happen at the doorway, such as the delivery of food, groceries, newspapers as well as mail and these events can make your dog feel so excited.

He loves to hear the sound of the doorbell or the ring of the door chime and is curious what would be the  “surprise” for him when you opened the door?

And he wants to be the first to discover it. This explains why your dog will stand by the doorway.

He Likes The Cooling Sensation Near The Doorway

If you find your dog starts sleeping at the doorway when the weather gets warm and stiff in the house, that is because the cooling breeze blowing in from the small gap beneath the doorway gives him the cooling sensation he likes.

The breeze will be much cooler than the room temperature and, as a result, the dog will feel more comfortable and fall asleep more quickly.

This makes the doorway an ideal sleeping spot for him as he enjoys the feeling of cool air on his skin.

To Establish His Territory and Show Dominance Over It

Your dog knows that the doorway is the entrance and exit to the house and when he sees himself as the pack leader, he wants to establish that territory by sleeping on that spot.

Anyone who wishes to go through the door will have to get his permission.

This is a sign of dominance, and you will need to train him to look upon you as his alpha and “draw” a boundary line that your dog should adhere to.

Make him know that you are the one providing him with all his needs and decide on where and when he should play, sleep and eat.

You are the one in charge and make the call! The doorway is your territory, and he can only go there with your consent.

He Is Signalling To You That He Needs To Go Out

Your dog is telling you that he needs to go out for his potty, or he wants you to take him out for a car ride or park walk.

If he is not yet neutered, he is trying to go out to find a mate.

By staying at the doorway, he uses it as a way to visually communicate what he wants without making it a guessing game for you.

Anyone that needs to go out will have to pass through that door, and he will have a chance to get that person to take him out.

Keep in mind that it is important for your dog to get enough stimulation, such as breathing fresh air outdoors, sniffing trees, flowers and plants along the streets, and interacting with other dogs in the parks.

This will help to relieve his stress and anxiety and make him well socialized.

He Feels That Spot Is Safer

If your dog ever had the experience of being trapped in a house that is on fire, he will be wary of staying in the house and if he had to do so, he will likely be staying close to the doorway.

This is because he knows that is the nearest to his escape route.

The same thing happens if your dog had ever been “trapped” inside a house by his previous owner and not allowed to roam outside, he will want to stay close near the door so that he will be able to get a peek outside whenever someone opens the door.

He Is Missing You (Suffer From Separation Anxiety)

When you leave home for work in the morning, does your dog show you his sadness? Did he barks and guards at the door to prevent you from leaving?

When you are back from work, he is so happy that he keeps jumping on you, following you around and even sleep beside you to make sure that you are not out of his sight.

And whenever you are awake, you will see him guarding the doorway to prevent you from leaving. Apparently, he does not like being alone in the house.

It is a sign of separation anxiety that you need to help him overcome the fear of being alone.