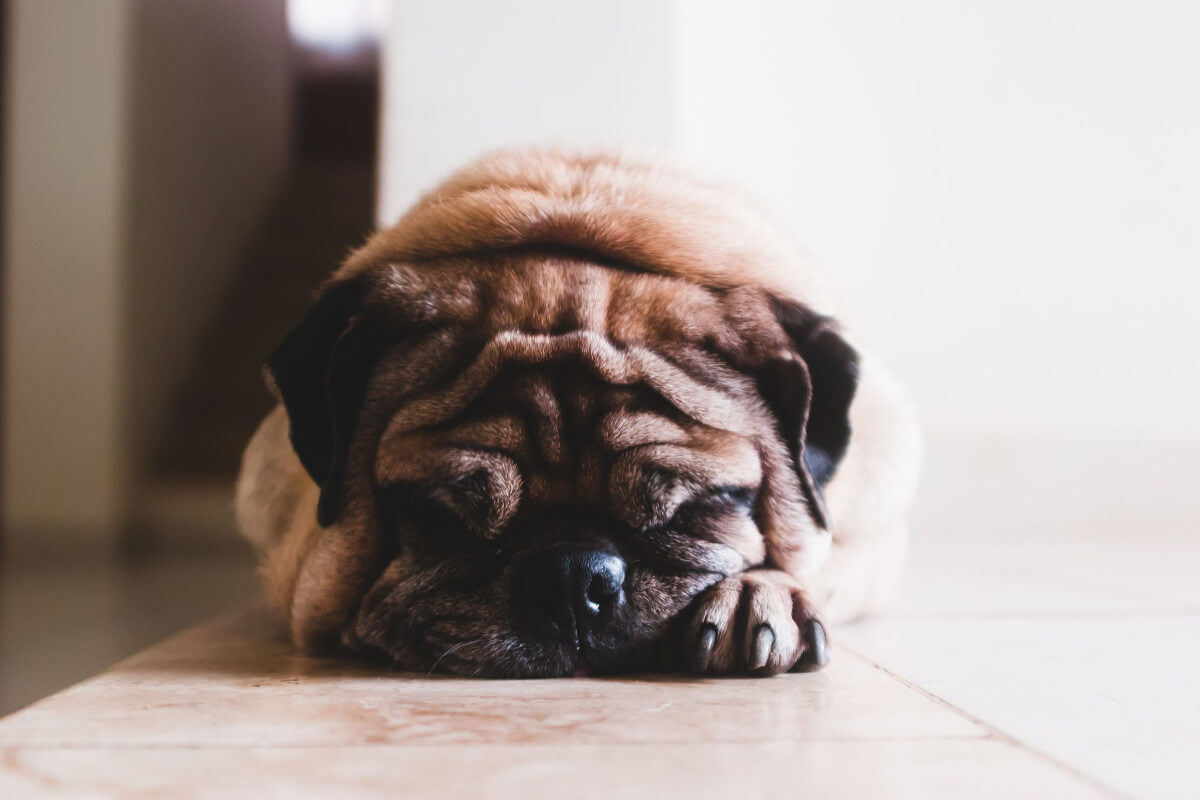 If your dog has been acting very strangely and is hiding from you, you may be wondering what is happening to him?

You will find from this post some answers to why your dog is behaving strangely, unexplained phenomena, as well as some plain strange stuff that you won’t think of.

It may give you some ideas for further investigation when your dog continues to act strangely. Who knows? Maybe what is shared over here will help you solve the mystery of why your dog is hiding from YOU.

When your dog is acting strange and hiding from you, he could be fearful of you or do not want you to hug him due to his arthritis. He needs some “private” moment for himself or is feeling guilty as the result of misbehaving. The presence of unfamiliar faces or loud noises could also make him go into hiding.

He Is Not Feeling Well

He could be hiding from you to prevent you from petting or hugging him which would cause him great discomfort.

So, the first thing you need to do is to find out what’s causing his pain and discomfort.

Then, you should make sure that he gets the veterinary care he needs.

He could be suffering from health issues such as an ear infection that is causing him pain, dental problems or aging problems (arthritis) and his joints are aching.

This is causing him a lot of pain and discomfort, and he wants no “touching” from YOU!  So, what he can do is to make himself “disappear” from you.

Usually your vet will be able to offer you some treatments that are safe for your dog. But, if he has a very severe case, your vet may suggest a more radical approach.

He Is Fearful Of You

If your dog is hiding from you because of fear, it would take much effort to help him overcome his fear of you.

It is impossible to make any real progress with any training unless you make him start to trust you and build the bond.

Start by feeding him with your hand. You would want him to feel your love for him and nothing works better than letting him know that you will never hurt him and that you are here to protect him and provide food for him.

You see, food is one of the essential needs for your dog and through feeding him with your hand, you are demonstrating your role as his Alpha to him.

In the wild, the pack leader is the one who hunts for the food for his pack members. So when you are feeding the food to your dog, he will see you as his pack leader and that will help him to overcome his fear of you.

Next, you should make a series of “safe” calming actions on your dog so that he would gradually get used to you being around.

Start by rubbing his belly and scratch his back a little while you are with him. This would make him feel at ease and be comfortable with you around.

You should rub his head, neck and massage his shoulders. Do this slowly and gently.

Gradually work your way down from his body to his paws. The idea is to make him feel relaxed and comfortable while he is with you.

All of these things take time and patience. Don’t expect him to instantly bond with you just because you are friendly with him. You can’t force it.

He Needs Some Private Spaces

Just like you would need some personal private space to do some relaxation after being stressed, your dog also needs some “PERSONAL” time.

Don’t be so “busy” with your dog all the time that he doesn’t get any opportunity to “enjoy” his personal time.

He needs times when he can just chill out and relax and let his batteries recharge. This is as important for him as it is for you!

You see, if he’s not allowed any “Recharge Time”, his mental and emotional batteries will become depleted, and he will start to feel stressed and worn-out. And this will have a negative effect on his physical health and well-being.

He Is Feeling Guilty

Your dog may have stolen some food and hid away to enjoy his meal.

You see, when your dog steals food and hides it away, it is usually because he does not want you to know where he has been or what he has been doing. It is a way of saying… “I’m guilty. I did something wrong!”

What you need to do is to find out what is really going on. So, how do you do that?

You see, most often when your dog has been hiding food, he will leave a “calling card” for you to follow. It’s pretty simple.

All you do is follow the trail of food from wherever it was hidden, and you will soon discover what your dog has been up to.

However, the best action is to prevent your dog from stealing food by ensuring that he does not have access to it in the first place.

You can do this by keeping the food locked up or out of his reach. If you do decide to keep some foods in your kitchen, at least put them where your dog cannot get to them.

Another thing you should do is to review his diet and make sure that he gets a balanced and nutrient food routine.

The best foods for a dog are the ones that are high in protein, low in carbohydrates and rich in essential fats.

Make sure that you do not give your dog too much food that is rich in carbohydrates as that can easily make your dog overweight.

He Is Feeling Uneasy With Unfamiliar faces

Just like your toddler might hide himself when you have a visitor that he is unfamiliar with (as a result of fear or shyness), this applies to your dog as well.

If your dog doesn’t know a stranger, he will try to get away from him by hiding under the bed or in a closet.

This is a natural reaction, and it’s completely okay.

What you should do is to acknowledge his anxiety and offer him your comfort.

The first step to dealing with anything that makes your dog uncomfortable is to acknowledge his feelings.

In this case, what your dog is trying to tell you is that he is feeling uneasy around strangers.

So the first thing you should do is make sure that all strangers (even if they are family) that come to visit him are people that he knows and trusts.

If they are “unfamiliar” to him, keep your dog in his crate, away from them till you have “officially” introduced them to him through socialization.

The second thing you should do is offer your dog comfort.

You could say something like “It’s okay Boy! I know you’re scared of strangers, but you don’t have to be scared of this guy. He’s one of my friends, and he wouldn’t hurt you.”

It’s important to remember that your dog doesn’t know what people are capable of, so he has every right to be cautious.

However, if you offer him some reassurance it will go a long way towards making him feel much more at ease around a new person.

He Is Hiding To Do His Potty

If you have ever yelled or scolded your dog for his potty accident in the house, he could be hiding in one corner of the house just to do his elimination.

He does this because he doesn’t want to be caught. This is a natural response for a dog as he tries to avoid being punished for this action.

Dogs are very similar to humans in this way. If he has done something wrong, he will try to hide from the people he loves the most.

This is why it is so important to catch your dog doing his business inside and correct his action immediately.

Starting him on potty training will be a wise choice as this will prevent him from having accidents in the house.

He Is Fearful Of Loud Noises

If you see that your dog is only acting strange and goes into hiding (usually he would go to his crate) whenever there is a fire alarm, bursting of a balloon, a storm is coming or there are fireworks going on, then he has the “LOUD NOISES” phobia.

This is not as uncommon as you might think.

Most people who own a dog have experienced this at one time or another. There are several reasons why your dog may have this fear:

1. He was once scared by the noise of fireworks and has never gotten over it.

2. He may have been scared by a real thunderstorm and has never recovered from it.

This is where it can get tricky. The first thing you must do is identify what caused his problem in the first place.

Was it fireworks? A thunderstorm? Or maybe he was just frightened by something else, and you didn’t know about it until now.

If it was fireworks or a thunderstorm, then the next step is to desensitize your dog to those things.

Start with a very low level of exposure.

For example, if your dog is afraid of thunder, don’t start by having him walk through a thunderstorm. Instead, take him for a short drive during the day when there is no lightning or heavy rain.

Do this every single day for a week. Gradually work up to taking him in the car during the day when there is some light rain.

Make your dog feel that it is not that frightening and no harm is going to happen to him when he hears these loud noises.

Gradually, he will learn to “accept” these loud sounds as normal and will remain calm as usual.

As you can see, this is not as hard as it sounds. Your dog is not scared by the noises themselves but by his “reaction” to the noises.

By making him react positively to the loud noise, he will learn to keep calm and be relaxed.