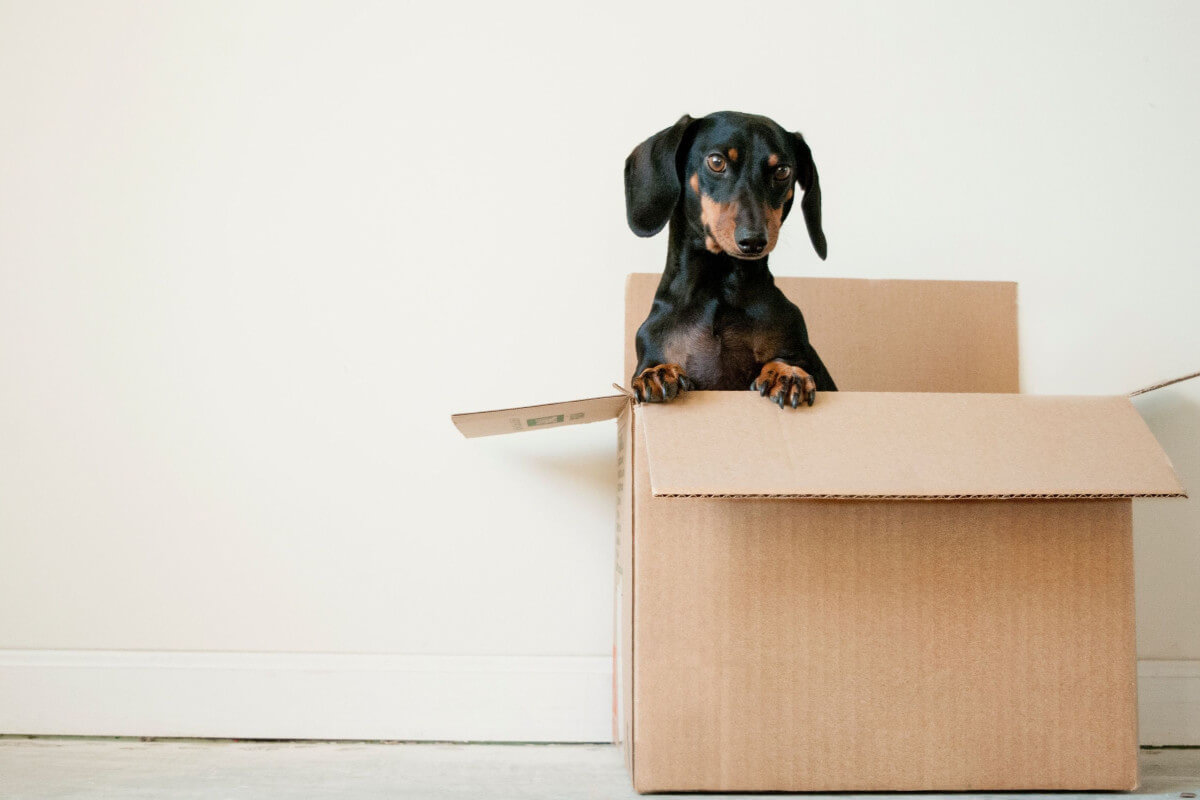 You place a cardboard box right in front of your dog, and he immediately retreats back and starts barking at it.

This makes you wonder why cardboard can trigger such a fearful emotion in your dog? What was in his mind when he saw the cardboard?

Traumatic Experience Of Being Abandoned In A Box

The box reminds your dog of something painful or frightening that has happened in the past.

If your dog had been previously abandoned by his owner in a box and is left starving for days before being rescued, that may have left a long-lasting traumatic experience for him.

This will make him associate seeing a cardboard box as a reminder of his own abandonment and being left alone to starve.

This fear of abandonment will make your dog fearful of boxes.

You have Play A Prank On Him Using A Cardboard Box

Dogs learn from experience and if you have ever played a prank on him using cardboard, that will install fear in him.

Say, if you are secretly trying to “cover” your dog with a big cardboard box while he is asleep, that prank that you play on him will make him afraid of boxes as he will believe that the box is used to capture or trap him.

So, the next time that he sees any box coming near him, he will flee for his life! He will think that that is a territorial thing.

Therefore, keep in mind that what you find to be a harmless and amusing prank might be seen as a life-threatening act on your dog.

He Gets Hit By A Falling Box

There is a saying that once bitten, twice shy and if your dog ever gets hit by a falling box, that will send fear in him whenever he sees any box.

He will see the boxes as a threat to his existence and he will feel the need to retreat and hide from them.

What you should do is to put a baby gate on the areas where you are storing your boxes to prevent your dog from reaching them and result in getting hit. (If he attempts to “peep” on them and causes them to drop from a rack).

The Shape, Size And Material Of the Box Frighten Him

Boxes can come in different shapes (rectangular or square), depth, color and size and these factors can influence your dog’s reaction to the boxes.

The lack of exposure to new objects will send fear to your scared dog when he sees the different color, shape, size and scent of the boxes appearing in front of him.

He is curious about these unknown objects and is not sure what he should do with them?

He will react in a defensive way, which is to keep a safe distance from it while he carries out his observing.

Usually, dogs tend to be more frightened by boxes with deep depth and rough surface. In addition, the size of the box will also make a difference. Larger boxes are more frightening to a dog than smaller ones.

This is especially so if your dog finds the box is large enough to trap him in it.

Things In The Box Frighten Him

You ordered a new vacuum cleaner, and it was delivered in a box. As you are opening the box, your dog goes up to it and, to his horror, he sees what he was most fearful of, a vacuum cleaner in the box.

This makes him associate the box with a vacuum cleaner in it and makes him fearful and wary of going near the box again.

Dogs are naturally fearful of vacuum cleaners for the following reasons:

The vacuum cleaner looks like a giant, strange object to your dog.

His ears are irritated by the loud noise generated from this object, and the odor of it is strange and confounding.

His fear of the vacuum cleaner is exacerbated by the fact that it can move.

As he sees the vacuum cleaner is able to move itself in all sorts of different directions, including backwards, forwards, and side to side, he gets worried that it will attack him.

That explains why he may even try to run away from the vacuum cleaner when it starts moving around.

All this strange “behavior” of a vacuum cleaner makes your dog see it as a very dangerous moving object which is a potential threat to him.

How to Get My Dog to Overcome His Fear of Cardboard Boxes?

To help your dog overcome his fear of the cardboard box, start by teaching him to approach the box slowly.

1. Do the training in an environment that your dog will feel safe to be in. This can be your bedroom or in a backyard that he is familiar with.

2. Place a small box about a meter away from him and leave an enticing treat (a small piece of beef or chicken) about 0.5 meters in front of the box.

3. Wait patiently for your dog to make his move to eat the treat that is near the box. Reward him with praise when he does that.

4. If he is progressing well with this training, gradually shorten the distance between the treat and the box.

5. The goal is to have the treat placed on top of the box and to have your dog get the treat right from there. This will make him associate boxes with rewarding experience and there isn’t anything that he is to be fearful of.

6. When your dog is comfortable approaching the box, replace the small box with a bigger one and continue with the training.

Starting your dog on a socialization program may be a good idea. A dog who has been well socialized will be able to cope well with his surrounding environment, without anxiety or fear.