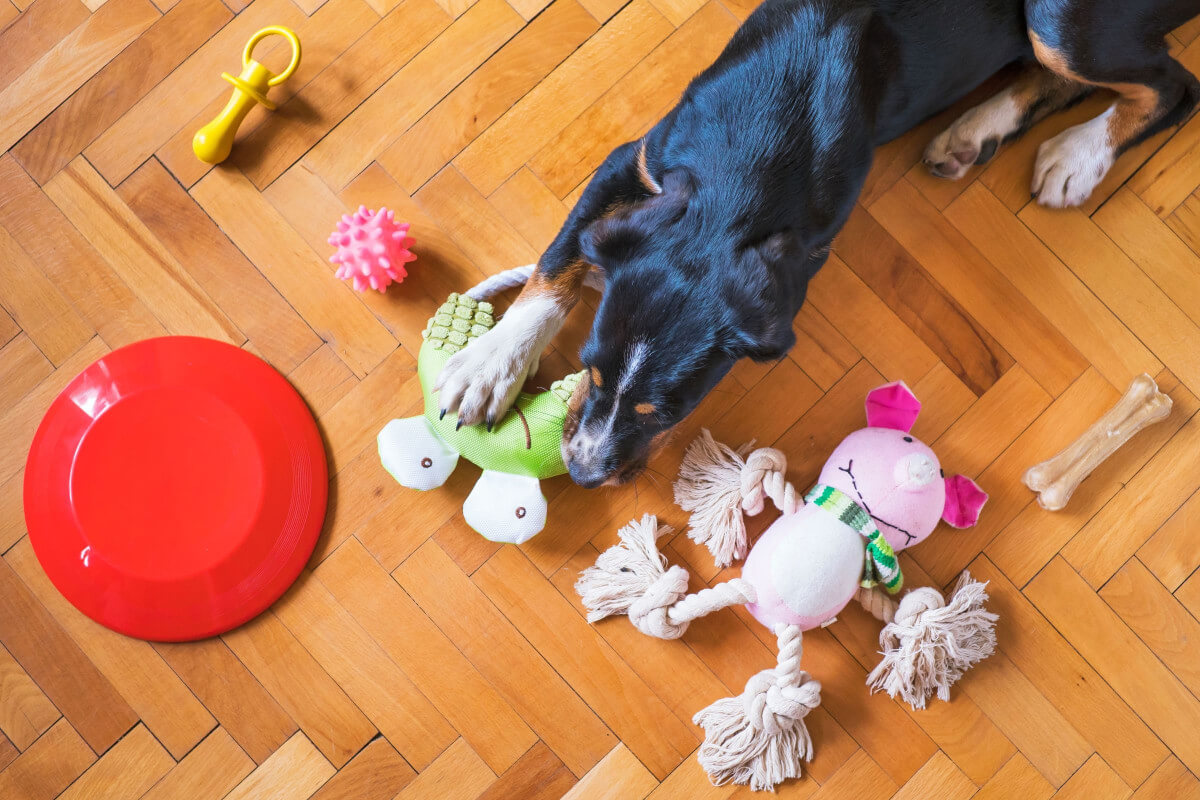 It is not surprising to see your dog performing the act of rolling on his toys, especially on the NEW toys that you are getting for him.

He does it for the following REASONS.

Your dog is claiming his ownership over the toys when he rolls on them. He is exhibiting his possessive instinct and considers these toys as his property. He is rolling over the toys to relieve his back itchiness or is trying to get your attention. He likes the scent of the toys and is trying to feel their texture.

He Is Claiming Ownership Over The Toys

Just like your dog will pee on a certain spot to claim his territory, by rolling over his new toys, he is attempting to leave his scent on these toys to assert his right to them.

He is considering these toys as his property and claiming his ownership of them.

That explains why, when you buy a new toy for your dog, the first thing he will do when he gets hold of it is to roll on the toy.

This action is to assert his claim of ownership over it.

He Is Exhibiting His Possessive Instinct

When your dog rolls over the toys, it is also an indication of how much dominance he has over these toys.

It shows that he considers these toys HIS belongings and not yours.

He is asserting his possessive instinct over the toys.

You will likely face some “resistance” when you attempt to take back the toys from him.

He is going to react aggressively, as if you were an intruder attempting to snatch away his belongings.

You will have to start teaching your dog that everything he owns comes from you, and you are the owner.

He has to accept that he is ONLY allowed to play with these toys for his pleasure and not for his possession.

This can be done by making him see you as his pack leader.

He Is Trying To Relieve Itchiness

If your dog is constantly scratching his coating, he may be attempting to ease his itchiness.

You would also likely see him rolling over some objects such as his toys to ease the discomfort on his back since he can’t possibly scratch his back.

So, keep a lookout for any skin disorder that may lead to his discomfort and ensure that it is treated.

Some common skin disorders that cause itchiness could be:

Demodectic Mange: This is caused by an infestation of Demodex mites and will appear as red patches on the skin.

Ringworm: This is a fungal infection that starts as small red spots on the skin, which then turn into painful open sores.

Follicular Eczema: Inflammation of the hair follicles results in this skin condition.

Pyoderma: Known as “pus in the skin,” pyoderma is often found in dogs, and can be caused by bacterial infection of the skin or inflammation.

He Is Asking You To Play With Him

Your dog is getting his new toys, and he is feeling excited and wants you to play with him.

By rolling over his toys, he is trying to get your attention and asking you to play a game with him with his toys.

He is telling you, “please play with me, and teach me how to play the toy!”.

He Likes The Scent Of The New Toy

Dogs have a habit of rolling over to anything that they like.

That is why you will see your dog rolling in dead animals, poop or mud as he finds these scents to be appealing to him.

So, if your dog likes the new scent of the toy, he will do a little roll-over and lick it all over.

It may seem like a fun thing for your dog to do.

However, if you notice that he rolls over to this toy more than others, then you need to take note of it.

This could be a sign that he is doing so because he is trying to get at something inside the toy.

So, make sure that the toys that you are giving your dog are safe for him to chew and play with.

He Is Trying To Feel The Texture Of The Toy

Dogs, unlike humans, are not able to feel the texture of the toys using their paws.

They do it by either chewing the toys or rolling over them with their body.

If your dog is suffering from any tooth discomfort, he will just have to rely on his body to get a feel for the texture of the toy.

Of course, in this case, you would have to work on addressing his tooth pain as the most preferred way is for him to chew on these toys and make sure that they are not too hard for him to handle.

This way, you can be sure that your dog is not hurting his teeth unnecessarily.