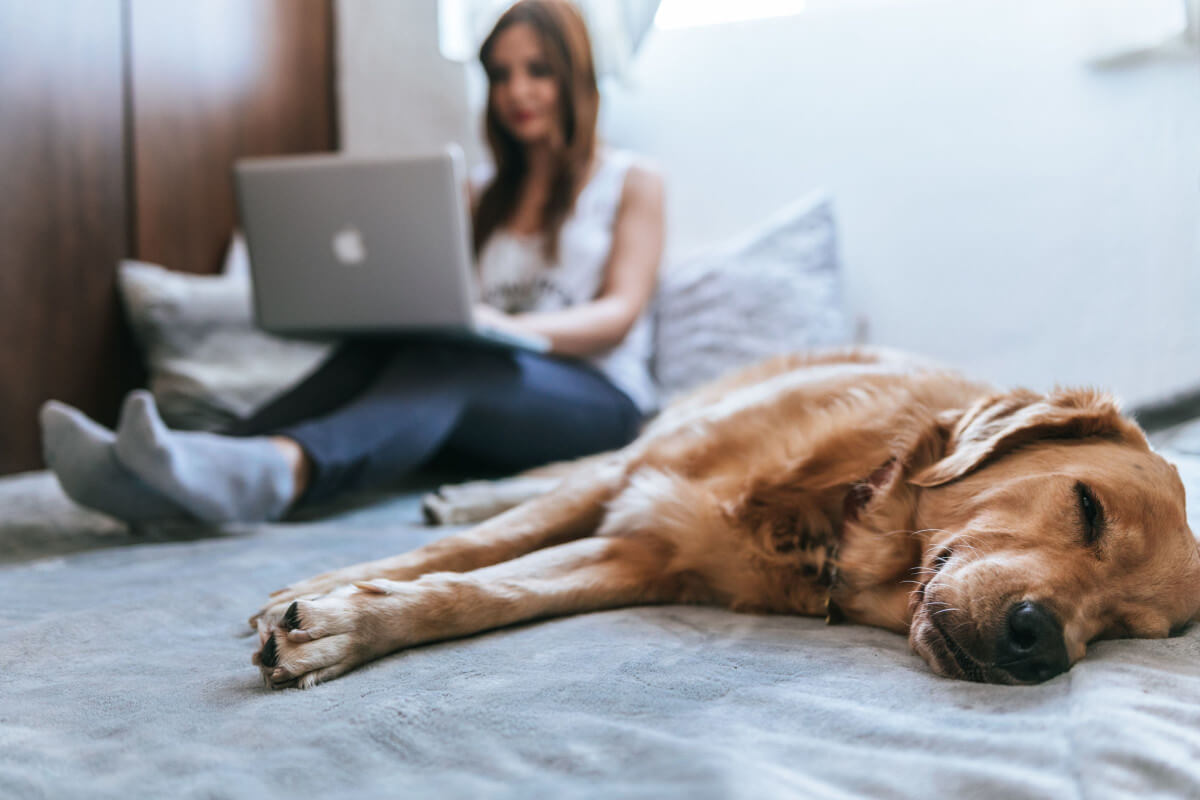 Your dog likes to sleep with his bum facing you, and you find that to be an awkward position for him to be in, and you wonder why he does that?

A dog likes to sleep with his bum facing you because he trusts that you will keep him from any threat. He is exhibiting his protective instinct and wants to be respectful to you. He likes you to pet his rear or has earned your praise from doing so. You have bad breathing or snoring in your sleep.

He Trusts You Will Keep Him From Harm

It takes lots of trust for your dog to “hand over” his rear to you.

This is actually a good sign as he sees you as his pack leader, not as a foe or stranger, and will be more willing to obey your commands.

He Wants To Be Respectful To You

In the dog’s world, staring is often seen as a “threat” and a form of challenge.

That is why you will often find your dog averting any direct eye contact with you!

By facing his bum on you during his sleep, he is expressing his submissiveness to you and telling you that he is not confronting you or wanting to be “dominant”.

He feels safe to be with you.

This submissive posture is the way for him to show that he respects you.

He wants you to know that he is your obedient companion.

You see, a dog that feels safe in his environment will never act out of control.

He will always be aware of what is going on around him.

He knows where the boundaries are and will never cross them.

He Is Acting Out Of His Protective Instinct

If you observe how dogs sleep, you would not be surprised why your dog is facing his bum at you during his sleep.

Dogs often sleep with their bums facing each other.

The reason for this behavior is to safeguard each other and keep a lookout for any potential danger.

In this way, they are able to see threats from both directions, instead of one.

So, when your dog does this action to you, he is trusting that you will protect him while he will do his duty to watch out for incoming intruders.

This is also very similar to how humans sleep, where we face the direction where the danger is coming from.

He Wants You To Pet His Rear

Did you ever gently pet your toddler’s bum just to make him feel at ease and get to sleep?

You may be surprised that your dog will actually want the same “treatment” from you.

He may have seen you doing that to your toddler and find that to be warming and comforting as you are devoting your full attention to doing it.

He wants you to give his bum a gentle message and pat to help him relax and go to sleep.

This is a very good way to build your bond with him and let him know that you are there for him.

You Have Encouraged This Action

Did you ever praise or pet your dog when he sleeps with his bum facing you?

Most of us have done it without even thinking about it.

Your dog will feel that by sleeping with his bum facing you, you are going to be happy and start praising him.

He is likely going to sleep in this posture again and turn that into a habit.

He will continue to do it because he has been reinforced for doing it.

So be careful not to reinforce the behavior you don’t want.

You Have A Bad Breath (Due To The Food You Eat)

Dogs have a sensitive sense of smell and if he smells something that irritates his nose, he will attempt to turn away from it.

This is why, if you eat foods that are cooked with hot peppers or ground spices or alcoholic drinks, the strong irritating smell lingering in your breath will turn your dog off.

He will not leave you as he loves you but will sleep in another direction with his rear facing you to get away from the scent.

You Are Snoring Too Loud

Besides having a sharp smelling scent, dogs also possess sensitive hearing ability and your snoring simply makes him restless.

He can hear even the slightest noise of your snoring and cannot sleep peacefully.

As he loves to be with you, he will try to keep the sound of your snoring in his ears to the minimum by turning his head away from you.

And the best posture will be for him to sleep with his bum facing you.

Unlike humans, where we like to face each other, even during our sleep, dogs prefer to sleep on their side, away from chest to chest or face to face contact.

This is because your dog can feel a lot of warmth (breathe) from your face when he faces you during his sleep and this makes him very uncomfortable.

This will disturb his sleep and make him more restless.

So he prefers to sleep in another direction with his bum facing you.

This posture also allows him to stretch himself as far as he likes during sleep.