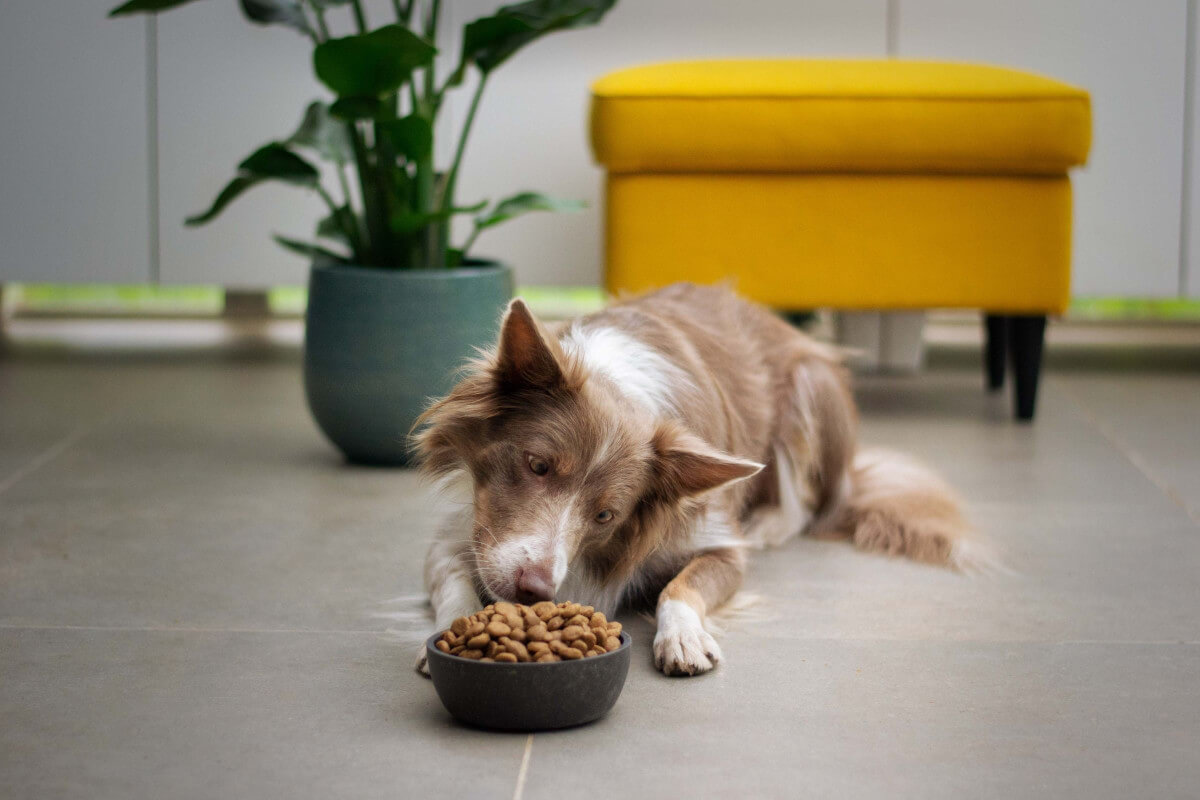 Are you wondering why your dog rolls on his food? Is this just another annoying habit or does it mean something?

Your dog is rolling on his food as he wants to mark it as his belonging. He is trying to mask his scent with the food or is feeling bored and playing with his food. He wants to inform his packmate of his food source or to learn more about the food. He wants your attention or has picked up this bad habit.

This Food Belongs To Me

When your dog rolls on his food, he is trying to leave his own scents on the food.

This behavior is often observed in the wild where dogs will leave their scent on the food they eat to demonstrate that they OWN them.

Though your dog now lives in the modern world, he still practices that behavior because that’s his natural survival instinct.

You see, dogs are pack animals, and they do not like to share their food with others.

They want to keep their food for themselves.

And so, when your dog rolls on his food, he is telling you that the food is ONLY for him and no one else should have it.

And if you try to take the food away from him, he’ll be more likely to resist by biting or even attacking you.

His Natural Instinct To Mask His Scent

In the wild, dogs often mask their scent in an attempt to protect them from their predators or to make a strike on their prey.

It is a natural instinct that has been passed down from the days when they were wolves to hide their scent and your dog is still practicing this behavior.

By rolling on his food, the strong scent from the food will help to mask his body scent.

Some foods, like raw liver, can be smelly and that makes your dog even more interested in his rolling action as it would have a similar scent to him rolling in dead animal or poop.

So, if you notice your dog is acting suspiciously with his food and is not eating it, he may be trying to figure out if he should be using his food to mask his scent.

He Is Playing With His Food (Due To Boredom)

This is what your dog will do when he is feeling bored, which is to play with his food.

He finds that by rolling over his food, he gets a lot of pleasure out of the “game”.

It offers him a back rubbing feeling and makes him feel good.

He also finds that this is a great way to keep him busy since he had nothing to keep him occupied.

What you can do is to plan some activities to help him release his pent-up energy.

For instance, you can play some physical games such as tug of war, flirt poles or chasing bubbles with him, taking him out for walks, or give him some chewing toys to keep him busy.

In the end, the goal is to make sure that your dog gets enough exercise so that his energy levels are balanced.

He Wants To Tell His Packmate Of His Food Source

This is one of the ways of communication between dogs in a pack.

In the wild, when a dog finds food, he will roll on it.

By rolling on his food, the scent of the food will be on his fur and this allows him to inform his pack members about what he is eating.

This is his way of telling his mates that he has found a source of food and signal them to follow him.

A Bad Habit That He Had Learned

If you find that your dog only starts to do this action when you bring him back from the boarding facility, he could have picked up this habit during his stay over there.

He has seen other dogs performing similar acts (rolling on their food) and finds this to be an interesting activity and starts to follow as well.

If this is the case, you would need to correct his behavior through training as soon as possible before it becomes a habit that is hard to break.

He should be taught that this is an unwanted behavior, and you do not like it.

You can do this by giving him the “Leave It” command whenever he attempts to roll on his food.

Only praise him and give him high value treats when he obeys your command.

This will help him to learn that by stopping this act, he will get more rewarding treats and help to create a positive experience for him.

If he still continues to perform this rolling behavior, you can try and stop the behavior by putting his food bowl away.

This will make him learn that BAD things will happen if he still rolls on his food.

Did you give your dog attention whenever you saw him rolling in the dirty mud or poop in the garden?

He had learned that if he doesn’t get enough attention from you, he can easily get your focus by doing the same act, but instead of rolling on mud, he now rolls on his food.

It’s a way for him to receive attention from you.

To prevent your dog from repeating this behavior, make sure that you keep him busy by giving him sufficient workout time and some toys to play with.

You have to reward him for his good behavior if he behaves himself and remains calm and quiet.

He Wants To Learn More About His Food

Are you feeding your dog some new foods? He may be curious about what’s in his food and wants to learn more about it.

Your dog will naturally do his investigation of his new food before eating it.

He will sniff, roll on it and do a few licks on the food just to get the taste of it.

Once he is done with his investigation, you will find him back to his normal self and stop rolling on the food.