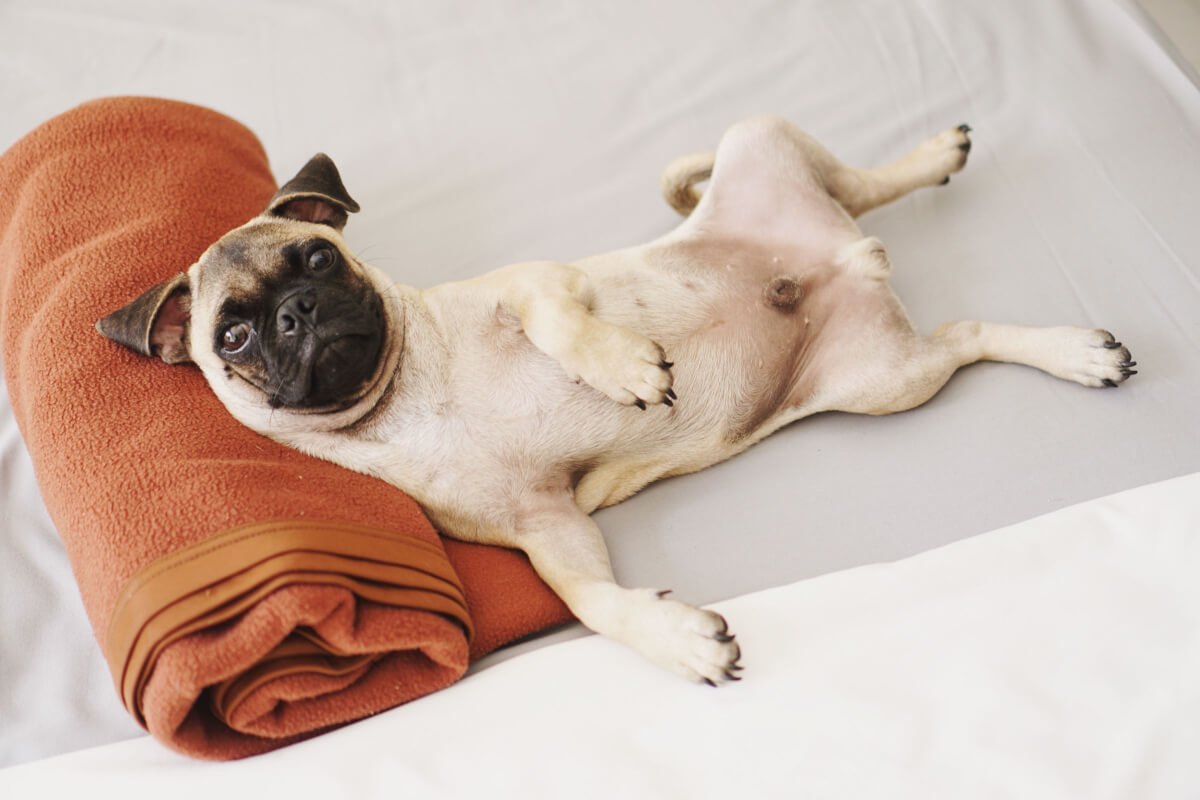 Did your dog simply enjoy rolling over smelly stuff such as dead animals and poop and bringing you those foul smells as a gift?

If this is what is troubling you, please read on as I have some solutions for YOU!

You see, there are a couple of things that make your dog behave in this manner (rolling in dead animals or poop).

First thing first. It’s absolutely natural for your dog (his bond instinct) to roll in smelly things to either camouflage his body scent or to mark his territory as this is what dogs will do in the wild.

Rolling in stinking things is a survival and hunting behavior for every dog and it would come naturally for your dog!

Dogs roll in dead animals mainly for these 4 reasons. First, he is trying to camouflage his natural odor to protect himself or to attack his prey. Second, he is marking his presence (Territorial Behavior). Third, he is seeking your attention. Fourth, he simply likes the smelly scent.

Your Dog Is Trying To Camouflage His Natural Odor

Your dog’s genetics make him create the need to camouflage his smell at all times.

This is also the reason why you will often find your dog keeps licking his fur after a bath as he wants to get rid of the new scent on his coat.

You see, in the wild, to protect themselves or to attack their prey, dogs need to find a way to camouflage their scent and disguise themselves.

The best way to do it will be to simply have their body covered with some other stronger odor scent.

And if you observe the way your dog rolls over the dead animal, he would be using his neck and back rather than his belly. This is because the scent coming from his back will be more prominent than his belly.

Your Dog Is Marking His Presence (Territorial Behavior)

This could be the way that your dog brings his message back to his pack as to where he has been and what he has found.

It could also be your dog trying to leave his scent on that smelly stuff to share the message that “Hey, I’ve been here before” to another canine around the area.

This is a sign of territorial dominance issue, similar to his usual urine marking behavior.

So when you are out for a walk with your dog, keep a lookout for any poop and stay steer of it.

And of course, the way to address your dog’s territorial behavior is to minimize the possibility of him “reaching” those smelly stuffs and mark his scent over them to claim his territory.

Prevention is certainly much BETTER than bathing his smelly body!

1. Always put your dog on a leash so that you can pull him away from any dead animals (maybe a dead rat on the road) or poop when you bring him out for a stroll.

2. If you want to do away with the leash, make sure that your dog is WELL trained on recall. This is extremely important so that you can use this command to have him come to you immediately if you see any smelly things along the way.

To make the recall a success, you will have to make your dog feel that it’s going to be much more rewarding coming to you than going for the dead animals to leave his scent there.

3. Fencing your yard if you find that your dog simply likes to roll his just bathed body over that dirty and smelly mud.

Your Dog Wants Your Attention

Your dog could also be rolling in foul smelling things just to get your attention.

If he had no access to any smelly stuffs, he would simply just roll on his toys to catch your focus.

He knows that by doing this action, it will elicit a reaction from you so he may do it as a bid to get your attention.

If you start to notice that your dog is frequently performing this action, start him on a refresher course on commands such as recall, sit and stay, then bring him to an area where you would leave a dead rat or snake to lure him.

Use these obedience commands (recall, sit and stay) to stop him when you see him attempting to go over to the dead rat or snake and make him return to your side.

Once he does it, provide him with plenty of reinforcement to make him feel that it is more rewarding to come to you than rolling in the dead animals.

Reinforcement could be in the form of treats, praise or petting on his chest or shoulder to show him that you love and treasure his attention!

Remember, your dog certainly loves to please you and the more you show him your happiness, the more he will be willing to perform what you have asked him to do.

Always praise the behaviors that you would like to see again from your dog!

When he has associated this behavior with rewarding experience, you would be able to use a recall command to have him come to you anytime.

Also plan on some routine exercises for him daily to help him release his pent-up energy and make him tired. When he is tired, he will not be doing some undesirable things (such as rolling on feces or dead animals) to get your attention.

Physical games such as Tug of War, Frisbee, Flirt Pole or Chasing Bubbles are great exercises for your dog to move around and burn off that excessive energy in his body.

I would suggest that you include some mental simulation games and activities for your dog.

These activities will require your dog to use his brain power and will tire him out easily.

Just like if you are learning new stuff which makes you utilize your brain, you would find yourself getting tired easily after the learning.

So give your dog maybe a frozen KONG toy stuffed with some peanut butter and let him figure out the way to retrieve the treat in the toy.

Remember, A Tired Dog Is A Good Dog.

Just like ladies like the smell of perfume and find that appealing, dogs find the scent of dead animals and poop to be extremely appealing to them though we find the smell disgusting!

Did you find that whenever you just finish bathing your dog with fancy designer shampoo that comes with a strong odor, the next minute he is out to the yard rolling in the mud.

He is trying his best to get rid of that scent (which makes him feel uncomfortable as his own scent which is important for his well-being is masked off) by getting himself rolling in some smelly things that he can get hold of such as the mud in your yard.

If you find that your dog is behaving in this manner persistently after his bath, I would suggest that you replace the shampoo with one that is unscented.

And if you are wondering if you can give your dog a bath at night, this POST will be of interest to you.