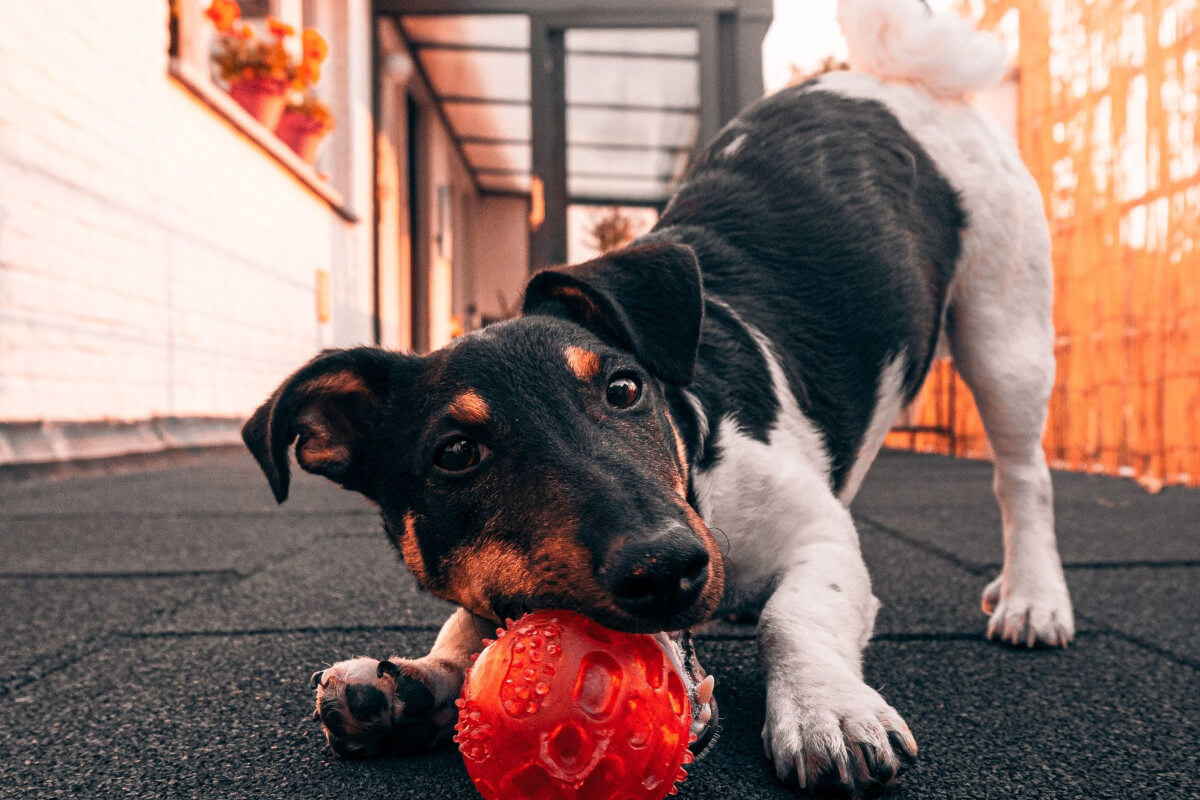 Did you know there are certain types of dog breeds that are genetically inclined to be more energetic and get bored easily?

They are the ones who will do weird acts such as playing with their food instead of eating it just to keep them occupied.

Of course, beside this explanation, there are certainly more reasons as to why your dog loves to play with his food rather than eating it.

He is not hungry, dislikes his new food or looks upon his food as his toy. He may have perceived that the food was not meant for him or the new feeding place made him lose his appetite. He is playing with his food just to gain your attention, or he could be suffering from dementia and is not able to recognize the difference between food and a toy.

He Is Not Feeling Hungry

When your child plays with the foods instead of eating them, you can be sure that he is not hungry. This applies to your dog as well.

You can easily tell if your dog is hungry or not.

Just observe his behavior and if he is playing with his food by pushing it around with his nose, you know he is not hungry.

This is often the case when you have probably overfed him in his previous meal, or you have fed him too much treat ahead of his meal.

As a result, he feels full and doesn’t want to eat again.

Look into his diet regime to see if there is a need to review his meal plan.

You see, dogs at different stages of life need to have different types of food to get the necessary nutrition that they require.

Factors such as his breed, age, size, health status and activity level all contribute to what and how much he should be eating.

For example, a dog who is very active, such as Labrador Retrievers, German Shepherds, Doberman and Great Danes, may need a diet high in protein and carbohydrates, while an older dog (who is more than 10 years old) should have more fruits and vegetables in his diet.

The feeding frequency should likewise be 2 times daily for senior dogs and 3 times per day for young and adult dogs.

Of course, depending on the activities level of your dog, you will need to make adjustments to his feeding schedule.

Say if you own a Chow Chow (an “inactive” dog breed) who lives a sedentary lifestyle and has reached his senior age, he is certainly not able to complete 3 meals per day.

You should cut down his feeding frequency to only 2 times daily.

And in terms of the quantity, it should be 2% to 3% of his ideal body weight in 2 separate meals per day.

Bear in mind that your dog has his specific metabolism and nutritional requirements at various stages of his life, so you will have to keep tailoring your pet’s feeding routine to his needs.

He Dislikes His New Food

He does not like new food such as the canned chicken that you had prepared for him. It could be the taste, texture or the scent of the new food that makes him uncomfortable.

Or it could be that he feels that the food is too hot, dry or wet for him.

So instead of eating the food, he plays with it by throwing it onto the floor, pushing it aside with his nose or chewing very little of it before spitting it out.

The food is no longer a source of pleasure for him. He wants to go back to the food that he liked earlier.

If it turns out that the problem lies with the new food, you may need to switch back to his previous diet.

What you should do is to prepare his regular diet and add a small portion of the new food to it.

In other words, you will be mixing his old food with the new one. The idea is to gradually introduce the new food to him over a period of 10-days and see how he responds to it.

He Looks Upon His Food As His Toy

Dogs who are young and are still growing will have the tendency to play with their food because they do not see the “real” value of the food, which is to satisfy hunger.

However, as they mature, they will start to learn how valuable food is. This is when they will begin to show more interest in their food.

If you have the habit of giving your young dog to play with toys that are food treats such as bully sticks, rawhide chews and bones, you should stop doing that.

This will create a false impression in him that his food or treat is his toy and he should play with it.

You can instead give him some other form of toys, such as dog rope or rubber toys which are non-edible.

Unlike humans, where we can eat on the go and at any convenience places, dogs are very particular about the area where they will be having their meal.

This is why if you have recently changed your dog’s feeding spot, he will not feel comfortable eating and drinking at the new location immediately.

He is likely to be fearful and anxious about taking his food in an unfamiliar spot.

You will see him playing with the food while he is trying to ascertain that the area is free from any potential threats before he lets off his guard and starts eating the food.

It could take up to 10-minutes or more for him to get used to the change.

Usually, after this adjustment period is over, you can be sure your dog will start eating and drinking from that new place with full enthusiasm.

You ought to ensure that his new feeding area should be:

He Perceives The Food Is Not For Him

The dog’s world is driven by biological and social imperatives. They live in packs, and all members of the pack have a certain pecking order.

Every member of a pack has certain rules about how to eat and socialize.

He will play with the food and will not eat it because he knows that the food is not for him.

What you should do is to have a separate feeding bowl for each of your dogs and put their food in it.

The dominant dog will eat first, and the rest of the dog will follow him.

Dogs are intelligent animals, and they know what needs to be done to get your attention.

If your dog is feeling bored and there is no outlet for him to release his pent-up energy, he will look for a way to entertain himself and to get your attention back to him.

And nothing works better than playing with his food, as he knows that will certainly get your focus on him!

Of course, you could also find your dog performing other acts, such as rolling on his food, digging your garden or chewing on your bedding just to get your attention.

If your dog is an energetic dog breed such as Border Collie, Australian Shepherd and Siberian Husky, he will be full of “unlimited” energy and needs a lot of physical and mental simulation to be able to burn all that energy that he had.

There is a saying that a tired dog is an obedient dog, so it is important to provide your dog with moderate exercise, in the right amount, to help him release his pent-up energy and ease his boredom.

Take him out for a long walk daily and introduce interactive games like Frisbee and tug-of-war to him. These games will tire him out and keep him mentally alert.

However, make sure you do not overdo it; your dog should not be running or jumping all day long. He needs time to rest and recover so that his body can function at peak efficiency.

When your dog is in his senior age (more than 10 years old), there is a chance that he might suffer from a mental disorder known as dementia.

This disorder makes your dog lose some of his mental abilities, leading him to perceive his food as a toy and start playing with it.

The most common symptoms of this disorder are: sudden loss of memory and thinking skills, loss of coordination and balancing, confusion with objects and places and lack of interest in his favorite activities.

If your dog has these symptoms, it is best that you take him for a veterinary check up.

To Satisfy His Natural Instinct

In the wild, dogs have to learn how to hunt and prey for their food in order to survive. This natural instinct that every dog possesses stays with them even when they are now well taken care of by their owners.

When your dog is playing with his food (which is using his nose to sniff and push the food along), he is in fact practicing his “preying” skill.

He is simply following what his instinct is telling him to do, which is to sniff out the scent of his “prey”.

So, if you want to help your dog to satisfy his innate instinct to hunt and prey for his food, then all you need to do is to give him some interesting and challenging tasks to do, such as hiding his food or treats in one corner of the house and let him hunt for it.

Dogs are naturally playful and will be attracted to many things. Some dogs like to play with toys, others play with water, some play with food.

Conversely, not all forms of play (especially when it comes to food) are desirable.

You should pay close attention to your dog’s behavior and stop any type of play which you find to be unacceptable.

Never let any undesirable behavior be a habit for your dog. Correct them as soon as you have discovered them.