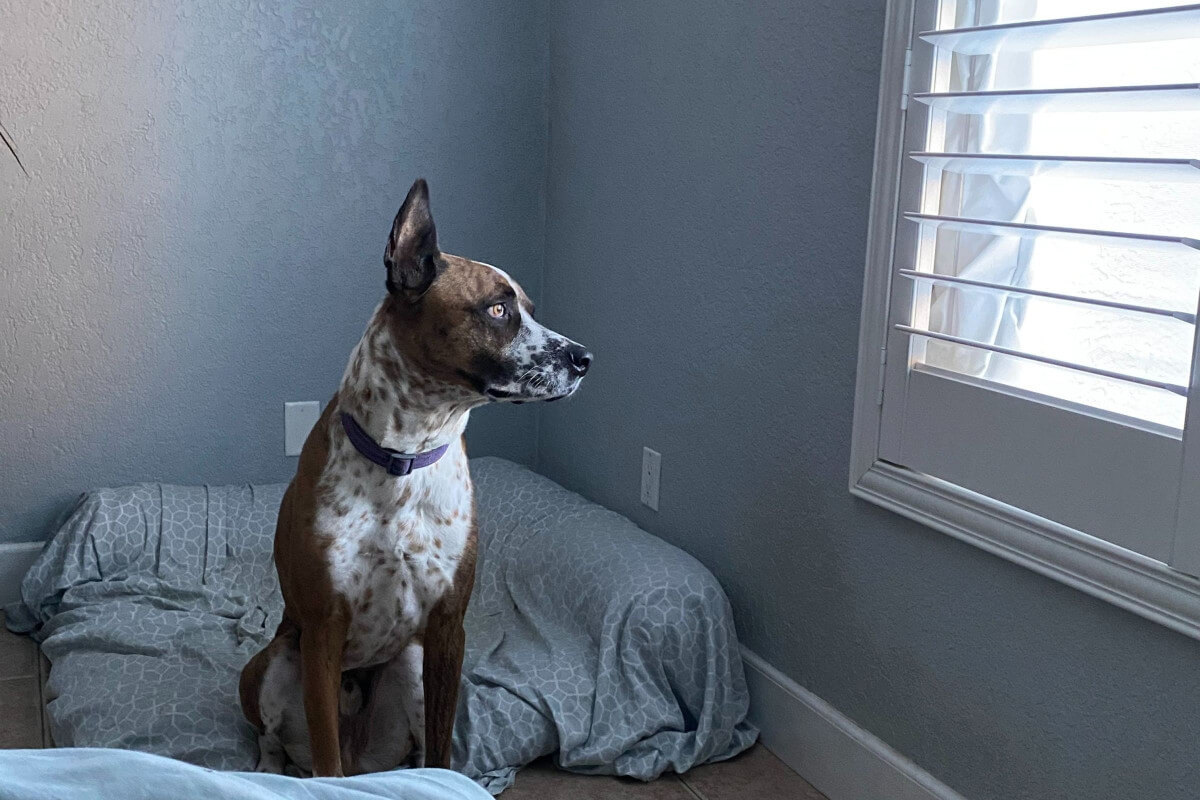 You saw your dog hiding in one corner of the house and was busy scratching the wall.

This is certainly an undesirable behavior that needs to be addressed.

Your dog is scratching the wall because he is trying to escape. He is feeling stressed or bored and is trying to keep himself occupied. He hears noise from the wall, and it makes him curious. He likes the scratching feeling, or you have encouraged this behavior. He could also be marking his territory.

He Is Trying To Escape (Separation Anxiety)

Your dog feels uncomfortable with his new environment (smell and sight) and the people in his life.

It certainly takes time for him to get used to all the changes that are taking place.

He finds it hard to cope with all the changes alone as he is away from his pack members.

It is inevitable that he will be feeling stress and suffer from separation anxiety.

A dog with separation anxiety can become destructive if he is not getting enough affection and attention from you.

He will try to escape from the home, and this can result in him damaging his surroundings, such as digging up the garden, scratching the wall and destroying things around him.

He may even bark and howl to get your attention.

There are many ways to help your dog cope with separation anxiety, such as giving him plenty of exercise, playtime and social interaction.

Start him on crate training so that he will see the crate as a safe and secure place to be when he feels anxious, stressed or nervous.

Make the crate a cozy “den” for him by placing a warm blanket in it with some of his favorite toys.

These toys will help to keep him occupied and free his mind from worrying.

Do not punish your dog for being destructive, as any form of punishment will ONLY just make him feel worse and cause him to have more anxiety.

It is better to deal with his anxiety problem as soon as possible rather than leaving it for weeks or months to come, as this can make the situation worse.

He Hears Noise From The Wall

Dogs possess a superb sense of hearing and are able to distinguish between different types of sound at a distance of several hundred meters away.

So it is not surprising that your dog will be more sensitive to any sounds coming from the house than you do.

He could have heard some sounds coming from the wall (It could be some cockroaches and termites hiding in the wall) and that triggered his curiosity to do some investigation.

It looks like something interesting is on the other side of the wall, and by scratching on the wall, he hopes to get a glimpse of it.

You Have Encouraged His Scratching Habit

The goal of your dog scratching the wall is to get your attention.

If you go over to him while he is STILL scratching the wall and asking him to stop doing that, he will believe that this action will earn him your attention.

And what is going to happen is that you are setting him up for success, and he will likely keep doing it.

Just like your toddler who has been badgering you for attention, if you do not react to his behavior, he will stop doing it after a while since he will find his action to be fruitless.

So, practice the same behavior with your dog.

Say a firm “No” when he starts to scratch the wall and walk away.

Wait till he stops doing the scratching and start rewarding him with a treat for his obedience.

He will learn to associate scratching on walls with a bad outcome, that is, you are going to ignore him, and he is going to get himself into loneliness.

He Likes The Scratching Feeling (Because of Long Nails)

Your dog needs some grooming. This is probably the case when his nails are growing too long, and he is looking for a way to get rid of them.

By scratching on the walls, it makes him feel better and offers that soothing sensation to him.

So it is important that you perform a routine grooming on your dog and keep his nails trimmed because long nails can cause great discomfort and pain for him.

You should never use a pair of scissors to cut his nails because it can break your dog’s nail plates and cause an infection.

Instead, you should use nail clippers to cut your dog’s nails.

He Is Feeling Stress

What would you do when you feel stressed? You would probably go out for a walk to unwind yourself or go for a car ride.

But, your dog couldn’t possibly do that as he is “trapped” in the house.

This is when you will see him start to act in an irrational manner, such as growling, whining, chewing on your furniture, scratching on walls or doors to relieve his stress and anxiety.

His stress could be caused by some life changes that he finds difficult to cope with.

Maybe he is still adapting to his new environment or his companion has left him, and he is feeling a sense of loss without her.

Or he may be feeling the effects of aging and just needs more attention and affection from you.

No matter what the reason is, if you see your dog acting in this way, you should try to help him by giving him lots of attention and love.

You should also give him a place where he can hide out from the world when he feels stressed and a crate will be a good choice.

Of course, you will have to crate train your dog before he sees the crate as a safe and personal place that he can go to whenever he feels frightened.

He Is Feeling Bored

Your dog is feeling bored as there is nothing to keep him occupied in the house.

You would see him licking his paw, going around the house restless or even start chewing on furniture or scratching the glass doors and walls.

These are signs that he possesses excessive pent-up energy and needs an outlet to help him release it.

What you can do is to make sure that he gets a sufficient amount of mental stimulation as well as physical activities daily.

Plan some physical games such as fetching a stick or ball, tug of war, playing flirt poles, chasing bubbles or playing hide-and-seek with him.

These games will require him to run, jump, chase, catch and run around and will help him release his pent-up energy.

Mental simulation activities such as puzzle toys and obedience training will make him utilize his brain power and keep him mentally occupied.

Puzzle is a great way to exercise his mind while he is working on solving the game.

This will also help to develop problem-solving skills in your dog. The key here is to make sure that your dog is mentally stimulated at all times.

By planning the above activities for your dog, he will be physically and mentally occupied and this will make him an obedient dog.

As the saying goes, a tired dog is a good dog and there is no doubt about it.

You need to understand that boredom is not a disease, but rather a state of mind.

He Is Marking His Territory

A dog may mark his territory by rolling around, peeing on the ground or scratching at the wall or floor.

So, if you find your dog hiding in one corner and scratching on the wall, he is marking his territory.

This is often the case when you have adopted another pet, and he feels threatened and wants to protect his territory.

He is telling the other dog that he owns this area.

This behavior isn’t always an indication of aggression, but you should certainly correct him before he leaves his scratching all over the walls.