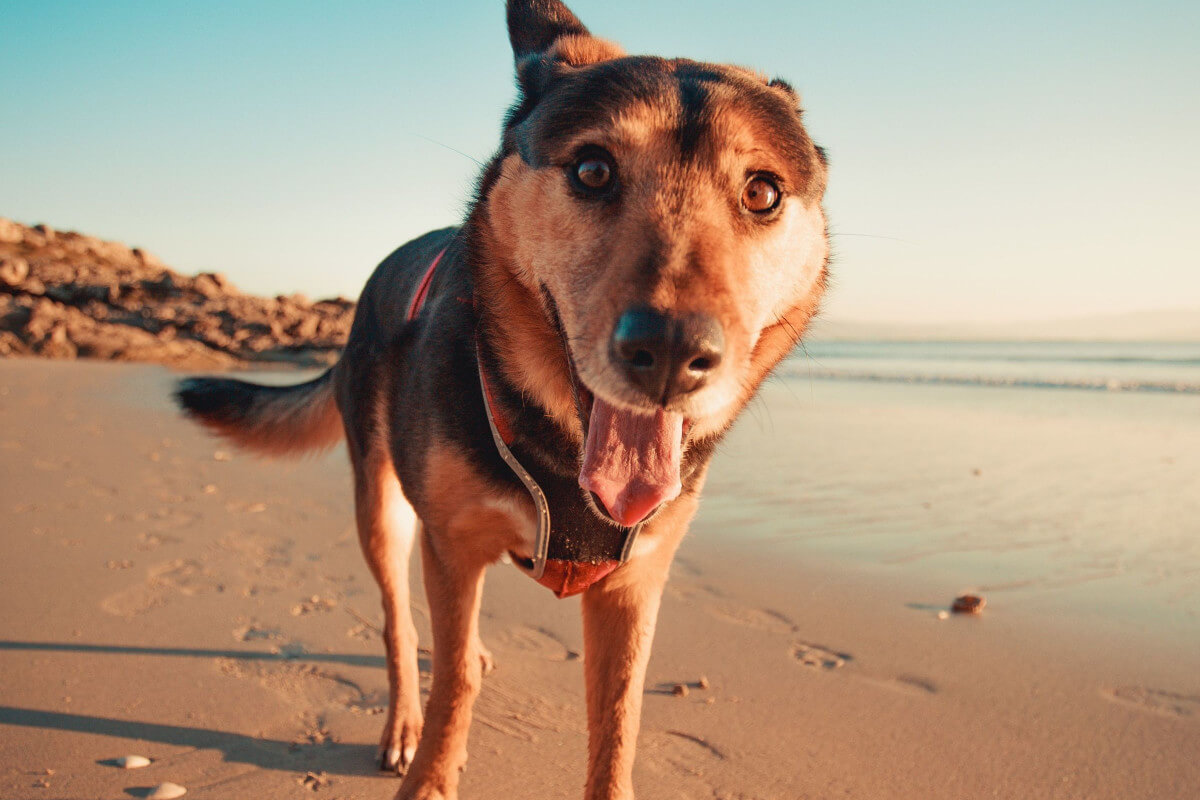 If you own a dog, you may be familiar with this phenomenon where your dog simply loves to get his mouth on the sand at the beach whenever you take him out for a beach walk.

Is it because he is hungry, just for fun or there is more to that unusual behavior?

Let’s peek into his mind to find out!

Your dog is eating sand at the beach to make up for his nutritional deficiency. He finds something in the sand that appeals to him. Pica is causing his eating disorder. Chewing on sand helps him to calm down as it releases endorphins in his body. His nose is soiled with sand, so he’s cleaning it. Chewing on sand eased his teeth discomfort.

He Is Trying To Make Up For His Nutritional Deficiency

If you are not giving your dog adequate nutrition in his routine diet, he will explore ways to make up for his nutritional deficiency that he needs, even if it means that he has to consume something that is not part of his regular diet.

In other words, he might eat what you consider to be “garbage”.

So it is not surprising to find him eating junk found in the trash, chewing on gravel, stones and eating sand as he feels that they will contain the minerals that his body needs and will be of benefit to him.

Thus, it is important to ensure that your dog gets a well-balanced diet that will meet all his nutritional requirements and also provide him with sufficient calories to grow, maintain and sustain his daily activities.

If you are not feeding him adequately, he may end up eating something that is not part of his usual diet.

Depending on his breed, size, age, health and activeness level, you will need to plan for his diet accordingly.

In general, you should feed your dog at least three meals a day. As for the feeding amount, the following will be the guidelines.

1. Toy breeds (such as Toy Poodles and Affenpinscher) need about 1/4 cup to 1 cup of dry food.

4. Large breeds (such as Alaskan Malamute and Bloodhound) need about 2 4/5 cups to 3 cups of dry food.

5. A senior dog (that is more than 10 years old) will need to be fed a bit less than an adult dog.

He Finds Something In The Sand That Appeal Him

Dogs are usually very good at finding hidden objects. So it is natural for them to look for things that are buried in the sand when they are on the beach.

They are capable of picking up scents hidden in the sand due to their excellent sense of smell.

Since they know that they will always find something interesting when they explore the sand at the beach, they love going there.

They will use this opportunity to practice their natural hunting instinct by digging in the sand.

And as your dog starts his digging, a collection of sea creatures such as sand crabs, beach hoppers, roly polies, beetles and blood worms will creep out of the sands.

These small creatures will arouse your dog’s curiosity and make him eat them along with the sands.

This is especially so for hunting breeds such as Labrador Retriever, English Setter and Beagle, where they have an affinity for digging.

Pica Is the Cause of His Eating Disorder

Pica is a compulsive eating behavior where a dog will eat something that is not edible, such as sands, gravel, soil, dirt, clay, chalk, wood, leather and plastic.

This disorder is most often seen in young puppies, especially those who are being fed a commercial diet instead of a puppy-appropriate homemade diet, but it can also happen in adult dogs, which could be a sign of underlying health problems.

Some common causes of Pica include:

1. Gastrointestinal disease – This includes problems with the stomach, intestines, and gallbladder.

3. Pancreatic disease – When digestive enzymes are released, they irritate the pancreas and cause inflammation. This can result in pancreatitis.

4. Diseases causing excessive appetite – This can include diabetes, hypothyroidism and cancers.

5. Neurologic diseases – A problem with the nervous system.

6.  Poor diet – The dog is eating an unhealthy diet.

7. Side effects of medication such as prednisone.

8. Psychological disorders such as separation anxiety.

So, keep a lookout for the above possible triggers if you find your dog starts eating non-food stuff whenever he goes.

He Eats Sand Out of Nervousness

If this is the first time that your dog is on a beach, he may be overwhelmed by the new sight, smell and people on the beach and that can easily freak him out.

This is especially so if he has not been well socialized and is going to be very nervous and start looking for things to chew in order to calm him down.

Chewing helps to release endorphins in his body which make him feel good and since sand is all around him on the beach, that certainly makes it (sand) his first choice.

He is also likely to exhibit other signs of uneasiness such as rapid breathing, low ears, whining, restlessness and persistent licking of his paws and nose.

Many dogs love to chew on sand and enjoy the feeling of the sand in their mouths. This is particularly so if your dog is suffering from some teeth discomfort.

The consistent texture of the sand makes it an ideal chewing medium for your dog as it provides relief for his sore teeth.

Another explanation is that chewing on sand helps to keep his teeth clean.

When he chews on sand, the rough texture of the sand helps to brush away any debris that has built up on his teeth and this makes him feel good.

His Nose Is Soiled with Sand, So He’s Cleaning It

Your dog is often mistaken for eating sand, but in actual fact, he is trying to clean up the sand particles that are stuck in his nose.

This happens because dogs are usually very curious and will sniff out and investigate everything along their way and when they are on the beach, sand particles will stick to their wet noses when they sniff on the sand.

Your dog will then attempt to remove the sand stuck in and around his nose by licking it and this is when he gets sand in his mouth.

It could be the case that your dog is not aware that he is eating something non – edible such as sand when he is playing on the beach.

This is because he is suffering from dementia, and you need to take him to a vet for diagnosis and treatment.

Dementia is a disease that affects the brain. It is a progressive condition that causes memory loss and changes in behavior.

It usually happens as your dog reaches his golden years, which is more than 10 years old, but it can also happen to any adult dog suffering from a brain tumor or a stroke.

And if your dog is suffering from dementia, he will have difficulty communicating and responding to your commands. It can also cause him to suffer from confusion and disorientation.

That explains why he is unable to differentiate that sand is non-edible food when he is playing on the beach and starts eating it.

A dog who has dementia will experience loss of appetite, changes in his sleeping patterns and undergo some behavioral disorders.

He may no longer be interested in activities that he used to love doing.

Another symptom that you will see is the changes in his behavior. He will be more aggressive than usual and will be restless and easily agitated. He will also have a harder time sleeping.

And finally, he will start showing signs of confusion and disorientation.

These are some signs of dementia in dogs and if you notice these symptoms in your dog, it is best to take him to the vet immediately.

Should You Be Worried If Your Dog Eats The Sand

It is probably not hazardous if your dog eats small amounts of sand occasionally, but if he eats excessive amounts or regularly, I would suggest that you should take him to the vet since that can lead to more serious health problems down the road.

He might have ingested other things in the sand that could pose hazards to his health.

A blockage in the intestines could result from eating too much sand. Your dog may become severely dehydrated and unable to expel the sand.

Even if he is able to pass it or puke it out, you should take him to see a vet immediately if he shows signs of discomfort.

Some symptoms of sand impaction include nausea, feeling bloated, experiencing abdominal discomfort, appetite loss or feeling fatigue after playing on the beach.

It can take anywhere between a few hours to a few days for these signs to appear.