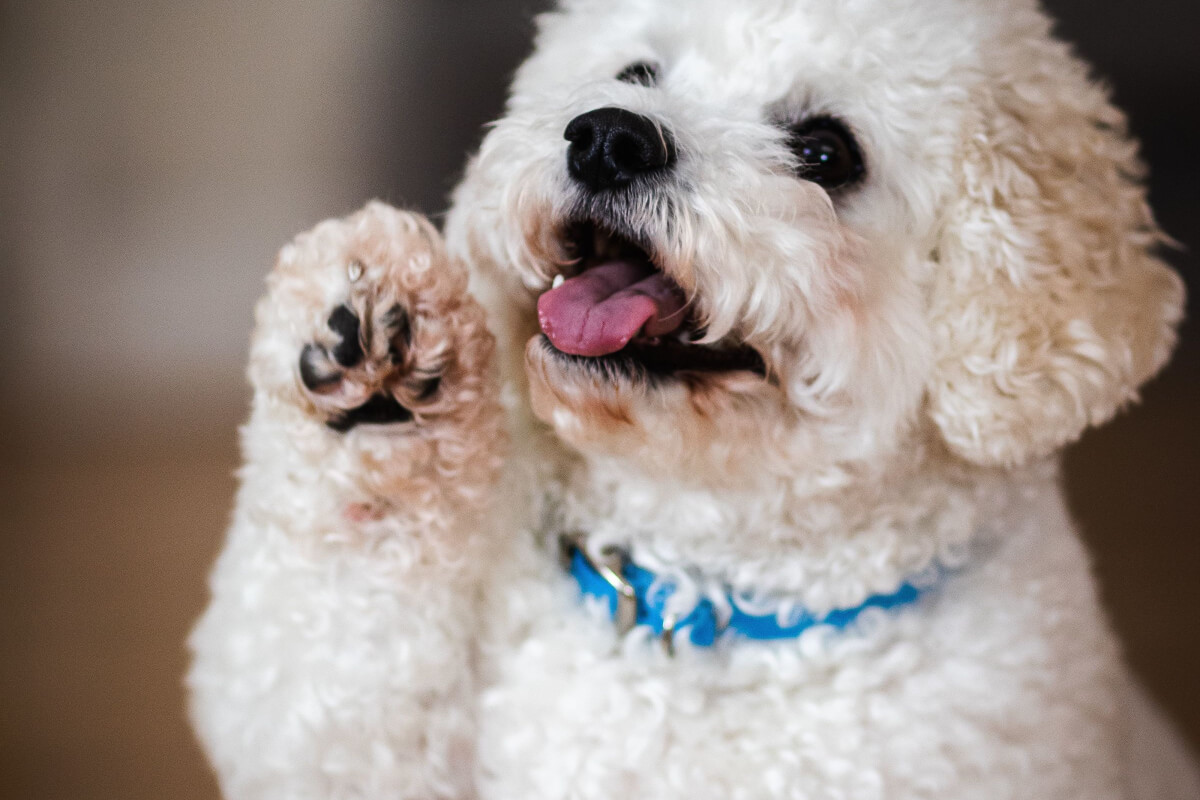 This is often the kind of behavior that all dog owners hate, that is, dogs licking their paws.

There is always a risk that they might be ingesting something that could potentially endanger them.

Fortunately, it’s possible to make your dog do away with this undesirable habit once you get to know the triggers and work on addressing those causes.

To stop your dog from licking his paws, work on addressing his triggers such as allergies (diet or environmental factors), infections (Yeast, Fungal or Bacterial), arthritis and bad behavior (due to boredom or anxiety). Make him wear dog boots or e-collar and clean up his paws after outdoor activities.

Look Into His Allergies

The most common cause for excessive licking of paws by far is dog allergies.

Your dog could be having some kind of allergic reaction to either food or environmental factors such as pollen from flowers that is causing his skin to react and leads to itchiness.

1. Look into his diet. Has your dog only started licking his paws recently? Did you make any changes in his diet lately? Or give him any new treats?

Treats or foods that come with ingredients such as beef, chicken, soy or wheat can sometimes trigger allergic reactions on your dog and tempt him to ease his itchiness through persistent licking his paws.

So keep a close look out if his licking habit starts following his mealtimes or after you give him some treats. If that’s the case, food allergies will be the culprit. You may want to revert to his old diet and see if this helps.

2. Look into environmental factors. In most cases, environmental allergies could be seasonal so you may see that your dog only starts his licking habit at certain times of the year.

For example, if your dog is sensitive to weed pollen, he would likely be doing that licking during the late summer and fall season when the pollen level is at its peak.

As pollen counts for weed are usually at its highest in the morning between 5am to 10am, you should avoid letting your dog out for any outdoor activity and keep him in the house to reduce the possibility of allergic infection.

Or it could be the case of his dry skin that causes his discomfort, and he wants to address it through licking (to provide moisture to the dry skin).

What you can do is to turn on a humidifier in your home when the weather gets hot or cold to provide more moisture in the air and to only use veterinarian-approved shampoo on your dog to avoid any skin irritation.

Oatmeal-based shampoos will be an ideal choice as it works extremely well in soothing any dry skin ailments.

Watch Out For Any Infections

Of course, an overgrowth of yeast infection, fungal or bacterial skin issue can also trigger extreme itchiness and irritation on his paws.

Often, you would see signs of infection around his paws such as discharge, smelly odor, swelling, redness or open wounds.

The more often he does the licking, the more itching, swelling and redness will be for his skin around the paws as his saliva will provide the required moisture for yeast to breed.

Bringing your dog to a vet for treatment would be an ideal choice.

For mild infection or allergy, you may want to consider the following Natural Home Remedy to ease his discomfort:

1. Take one teaspoon of green tea leaves and put it in 2 cups of hot water and let it sit for 20 minutes till it cools down.

2. Filter the tea and add in another 2 teaspoons of apple cider vinegar.

3. Followed by 1 teaspoon of Himalayan salt into the solution.

4. Add 5 drops of lavender essential oils into the mixture.

5. Mix these all together and immerse your dog’s infected paws in the solution for about 5 minutes.

6. Carry out this treatment on your dog’s foot twice daily for a week and you should see the improvement.

IMPORTANT: Do NOT use this remedy on your dog if he is having any open wounds or cuts as apple vinegar can be quite irritating.

You can instead use ONLY just green tea though the effect might not be as good as the full remedy.

This is yet another painful condition that happens mostly in older dogs as they tend to suffer from joint pain as they reach their golden age.

It could also be the case of your dog suffering from hip dysplasia, and you would likely see him walking in a sideways position.

You may want to pay a visit to your vet for prescribing some medications such as Galliprant or Meloxicam for controlling the pain. This will ease his discomfort and hopefully make him do away with his licking.

How about trying out some natural herbal arthritis remedies on your dog?

1. Comfrey is well known for its anti-inflammatory and pain relief effect. You can get some of this dried herb and use it as a warm compress on your dog’s paws.

2. Frankincense is a common herb to reduce pain and stiffness in dogs. You can apply a few drops of Frankincense essential oil on your palm and gently massage your dog’s paws. This will offer him much relief from the discomfort caused by arthritis.

3. Turmeric is yet another effective herb to address pain related problems caused by arthritis. You can go for some pet food that comes with turmeric or to get hold of a bottle of turmeric liquid and add a few drops to his food.

When your dog is feeling bored, lonely or stressful, that could also lead him to perform undesirable actions such as licking his paws or private areas.

You see, dogs by nature are wild animals, and they like to get out and run around. If you have been “trapping” your dog in your house all day long, it’s inevitable that he gets bored and finds things to keep him busy.

Some common behavior that your dog could possibly do to kill his boredom is eating his poop and licking his paws. These are habits that can be corrected through obedience training.

What you can do is to simulate him both physically and mentally to help him release his pent-up energy and keep him in low energy mode.

When your dog is less energetic, he will be more calm and obedient and less likely to do any “monkey business” such as scratching the carpet.

So ensure that your dog gets adequate physical workouts and mental simulation games for the day to keep him busy.

Some popular physical games that you can plan for your dog include tug of war, chasing bubbles, flirt poles and Frisbee.

As for mental simulation games, you can prepare a frozen KONG toy stuffed with real meat (this will make the toy very enticing for him) and give it to your dog for him to play with.

He will be spending his time and using his brain power to think of ways to get the meat out from the toy and this will certainly make him mentally tired.

I often have this little habit of biting my finger whenever I feel nervous. Dogs also do have their little habit to ease their stress or anxiety beside barking, and that is to lick their paws.

So if you are suspecting that stress or anxiety could be causing your dog to perform this habit, you should try to help him do away with these emotional disorders and break him free from this habit.

I would suggest that you start your dog on his crate training if you have not done so.

You see, crate training provides many benefits and one of it will be to train your dog to see the crate as his personal secure space similar to his den.

This will help him to seek shelter from the crate whenever he feels stressed or nervous and needs to “hide” from what he sees as a threat.

He will get to calm down while in the crate and you could also place some of his favorite chewing toys to keep him occupied and divert his attention from licking his paws.

This is his way to clean up his paws after a recent walk as he is feeling uncomfortable with some unpleasant things such as dirt, sands, pollen, mud, grass, pesticides or gasoline that are left on his paw pads.

Unlike humans where we wear shoes to protect our feet and keep them from any dirt, dogs usually walk with their bare paws (unless you put on a dog shoe for your dog) and we often forget that their paws might also need a good wash up after the walk.

Certainly, you do not want your dog to ingest all these impurities when he does his licking.

So what you can do is to help him with a cleanup. Give him a nice wash up of his paws after any outdoor activities such as a stroll or exercise.

This is what you can do:

1. Fill a pot with warm water.

2. Add a few drops of odor free dog shampoo. It’s important that you use shampoo which is neutral in scent as dogs don’t like any smell on their body and paws.

What smells nice to us might not be the case for your dog, and he might be doing things (such as digging the garden) just to get rid of that smell on his paws using the soils in the yard.

3. Gently wash each of his paw thoroughly using the solution.

4. Make sure to keep his paws dry after the washing to avoid the growth of yeast.

Do NOT ever use human shampoo or dishwashing liquid as that could cause his skin to dry up and lead to irritation.

Alternatively, you could also make use of some odorless baby wipes to do the cleanup.

Don’t Give Him The Opportunity To Lick

Just like you put on a teething glove for your infant to prevent him from chewing his hands, you can certainly do the same for your dog.

Get your dog to wear dog boots. This will prevent him from having any opportunity to do his licking. Over time, he will learn to do away with this habit since he doesn’t get the chance to practice that at all!

You can make use of an E-Collar (those lamp shade looking type) to restrict him from reaching his paws to lick them. Your dog will likely hate wearing it but this is something that you have to do for his own good.

Certainly you do not want your dog to suffer from any stomach upset or poisoning as the result of licking on toxic chemicals that stain on his paws.

The other alternative will be to redirect your dog from his licking using treats or his favorite toys.

This is more of behavior training where you want him to learn that by not licking his paws, GOOD things will happen. He will be rewarded with treats or a toy.

This will help to reinforce the behavior that you would want him to perform.

If you also find your dog persistently licking his nose, you may want to visit this POST to learn more.