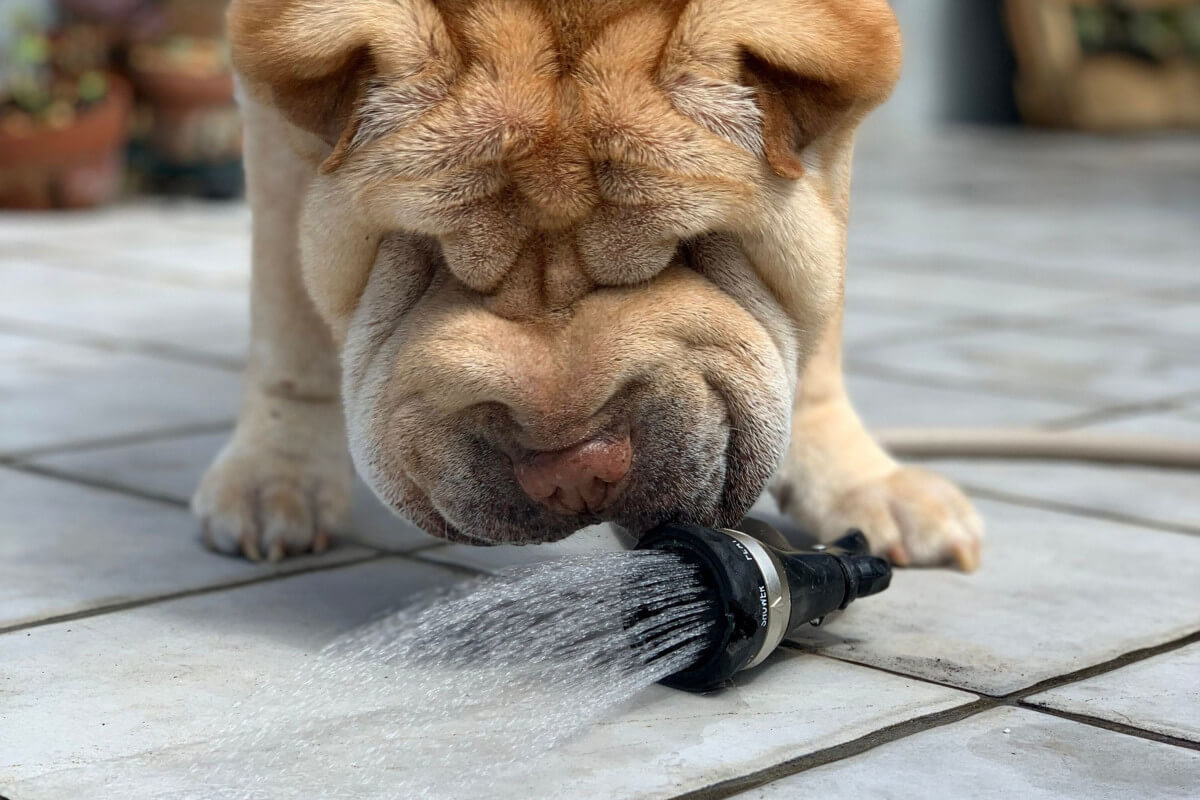 As you pick up a water hose to water the plants in your backyard, you find your dog, who was clingy to you earlier on, had fled away. This makes you wonder why he is so fearful of the water hose?

Dogs could be wary of the water hose for various reasons, such as the snake-like appearance of the hose, the sudden “gushing” of sound from the nozzle, smell of fresh water from the hose or a terrifying encounter with the hose such as being hit by it.

The Snake-Like Appearance of the Hose Scared Him

In the wild, snakes are a common and natural predator. They have a habit of lying in wait for their prey and are known to be cunning and ambush predators.

Therefore, it can be very intimidating for dogs when they see a hose that looks like a snake.

As you turn on the water inlet connecting to the water hose, the build up of the water pressure in the hose will cause it to sway and, with its long and snake-like shape, it can give your dog an illusion that it is actually a real snake.

That explains why he ran away from you the moment he saw you taking out a hose.

The sudden “gushing” sound of water from the hose was so unexpected that your dog got a fright.

His nervousness was heightened when he saw the water was flowing out of the nozzle of a hose in an immense force.

This creates fear and anxiety in him as he knows that if he gets “hit” by that intense water force, he will be seriously hurt.

Thus, when you are using a hose to water the lawn or garden, it is not surprising that your dog will be frightened by the loud noise of the water gushing out from the nozzle despite him being far away from you.

This is because, compared to humans, a dog can perceive sounds up to a quarter mile away, and at times even farther.

Also, dogs’ ears are shaped in a way that allows them to hear better than humans.

So any traces of noise which cannot be picked up by your ears is easily detected by your dogs’ keen sense of hearing.

Smell of Water from the Water Hose Confused Him

Your dog is familiar with the scent of the water hoses as he has sniffed them when they are not in use.

However, when you are using the hose to water your plants, he smells a different scent (it’s a fresh scent of water) from the hose, and it is not the usual scent that he had previously associated with the hose.

This difference in smell confused him and made him think that there was something “fishy” about the hose.

He will observe the hose from far away and will only go near when he has cleared his doubt.

If your dog ever gets hit by a swaying water hose, that could create a long-lasting painful impression on him. This is an unpleasant experience for him, and he doesn’t want to repeat it.

He will have a hard time getting comfortable with a water hose (not necessarily a bad thing) and will flee the moment he sees it.

It could also be the case that he is being reprimanded or punished by his previous owner for playing with a water hose and that makes him associate the hose with a bad experience.

This makes him feel that when he gets close to the water hose, BAD things will happen, that is, you will be unhappy, and he will be punished.

Another explanation is that if your dog is terrified of getting drenched, that could explain why he is fearful of the water hose.

He knows that the water from the hose will make him wet, and he dislikes the damp sensation. This will cause him to feel fearful or stressed when approaching water hoses even when they are not in use.

Natural Instinct to Be Wary of Unfamiliar Object

It is a dog’s natural instinct to be wary of unfamiliar objects, especially those that are big, long or resemble the shape of a certain predator.

For example, your dog might bark at the ceiling fan as he sees the fan as a BIG bird hovering up in the air or trembles when he sees a spike created from a lighter in your hand.

This instinctively response (to be wary of any kind of strange noise or movement) is normal for any dog to survive and protect himself since the days of cavemen.

In order to teach your dog that the water hose is safe, you will need to desensitize him to it.

1. Have the water hose placed at a distance of about 1 meter away from your dog.

3. When he stares at the hose without any discomfort, praise him and offer him a highly valuable treat such as a piece of cheese. This is to make him associate the hose with a rewarding experience. That is, good things will happen when he reacts calmly towards the hose.

4. Keep repeating this exercise and let him stare at it for a few more seconds before praising and rewarding him.

5. As he is accustomed to the sight of the hose, you can slowly move the hose closer to him. Do this gradually as you want to avoid any stress and discomfort for your dog.

6.  When he is reacting well, looking and sniffing at the hose without any discomfort, you can increase the training challenge.

7. Pick him up and hold him in your arm as you turn on the water to the hose.  If your dog shows any signs of distress or fear, back off a little and work on the training from a “safe” distance that your dog is comfortable with.

8. Your dog will not overcome his fear of the water hose with just one training session. It will take time and patience to achieve consistent success with this method.