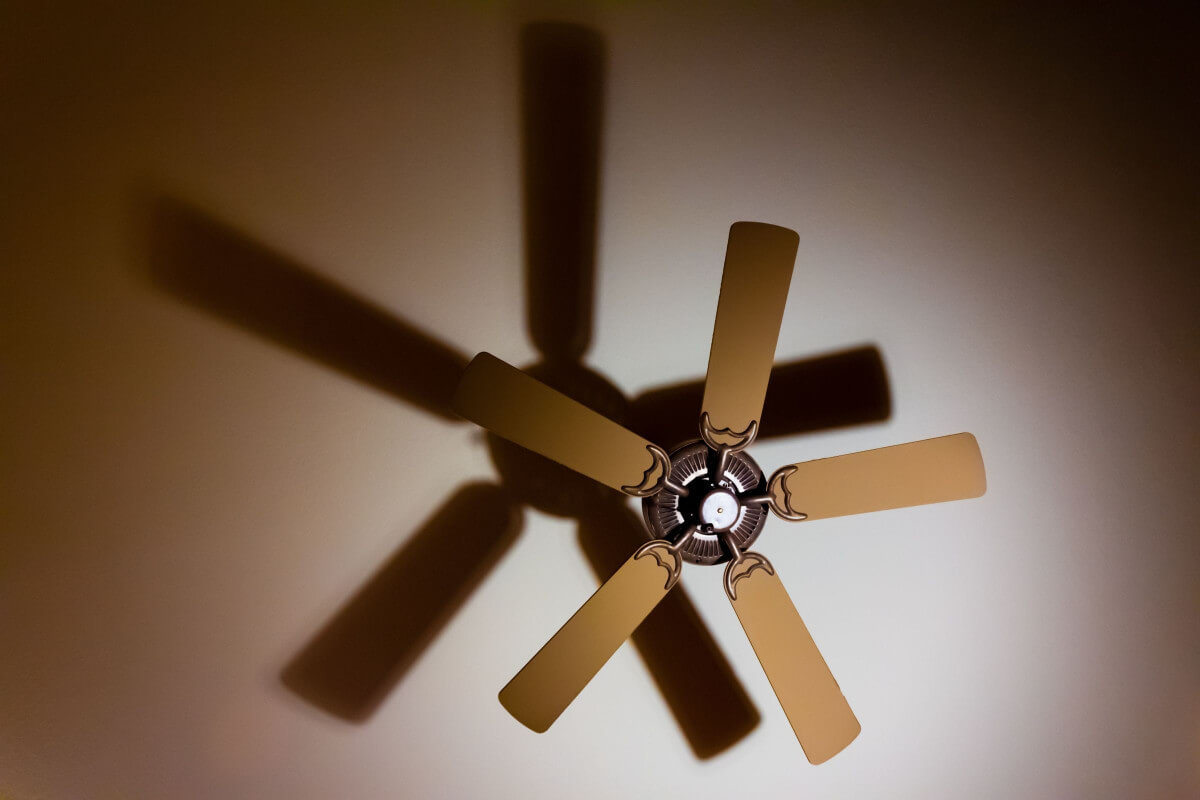 Has your dog ever been frightened by something that you are sure is harmless? I’ve experienced this many times, especially with ceiling fans. My dog is simply terrified of them.

I had never figured out the reasons why he is reacting in this way until my friend, who is also facing the same behavior problem with his dog, shared with me his findings.

The Spinning Sound Of The Blades From The Fan Terrified Him

Whenever my dog hears the ceiling fan turn on, he will either go under the table or hide in his crate.

It seemed that he had perceived some sort of threat coming and was trying to flee for his life.

This is because when the ceiling fan is running at full speed, there is a constant whooshing sound generated.

This sound is caused by the blades “cutting” through the air and can be pretty scary to a dog who possesses a great sense of hearing.

Metal blades on the fan can make a tremendous amount of noise.

Together with the sound from the fan’s motor, this can cause great stress for your dog.

To make the noise less scary for your pet, you can either make him wear ear muffs or lower the speed of the ceiling fan.

Lighting Fixtures On The Ceiling Fans Stunned Him

Another explanation for that is that he is scared of the lighting fixtures on the ceiling fans.

I have never thought about that before until my friend shared his finding with me (as that’s what happened to his dog).

Maybe he is right as my dog has been very afraid of any type of light fixtures for as long as I’ve known him (since adoption).

He gets really scared when I turn on the lights in my room. I don’t understand why he’s so afraid of them as they look perfectly harmless. They’re just little lights.

This seems to be the explanation for my dog, as when I turn on the light fixtures on the ceiling fans, he goes crazy. He runs back and forth like mad.

I guess it’s because the light fixture looks like a large, bright, and very scary face to him as the fixture is often placed in the center of the ceiling fan and “staring” at him.

Wary Of Unfamiliar BIG object That Hanging In The “Air”

It is a natural instinct for dogs to be fearful of things that they have not seen before, in particular if they are big and moving.

Your dog may perceive the ceiling fan as a predator, such as a big hawk that is hanging in the air.

He is wary that it will chase after him, or worse yet, attack him when he goes near it.

This is a very common perception for dogs, especially if they are not yet trained on socialization.

Breeze From The Ceiling Fan Frighten Him

A moving fan creates a breeze that could frighten your dog. He is confused as to how that BIG “creature” hanging on the top of the ceiling could create a breeze like that.

And the moment you stop the ceiling fan, the breeze will be gone. It’s quite disturbing for him as he feels that this “creature” is able to make instant changes to his surroundings (breeze) and he is not able to smell his presence, that is, there is no odor from it.

Without a doubt, he would be scared and start to panic.

So if you are planning to install a ceiling fan in your house, make sure that the ceiling fan is not near your dog’s bed or couch.

This could be related to a fearful experience that he had with the ceiling fans before.

Maybe he had a near miss in an accident where the ceiling fans fell down right in front of him and that created a lasting fear in him.

He is having a hard time letting go of the fear and believing that this accident could happen again. This makes him associate ceiling fans with great danger and will not want to go near them.

You could try out methods such as desensitization to help him reduce his fear of ceiling fans.

This method involves gradually exposing your dog to an anxiety-provoking stimulus (in this case, it would be the ceiling fans) until he is no longer afraid of it.

1. Hug your dog in your arms and stand about 2 meters away from a stationary ceiling fan. I would suggest hugging your dog (provided he is a small breed) because this posture will allow him to feel your calm energy and that will prevent him from anxiety.

2. The moment he focuses his attention on the fan, praises him and gives him a valuable treat. This will make him learn that there is nothing to fear when he is staring at the fan.

3. When he is reacting well to this training, gradually reduce the distance between you and the fan and continue with the training. Remember to offer him a reward when he is showing calmness when looking at the fan.

4. If he shows signs of fear, take a step back and use a treat to divert his attention. Start the training again once he had calmed down. Take note of the safe distance that your dog is comfortable with and proceed from there.

5. Once he becomes habituated to the stationary ceiling fans, you can proceed to the next challenge, which is to switch on the fan.

6. Go back to the initial safe distance that your dog feels at ease with a moving fan and work your way from there.