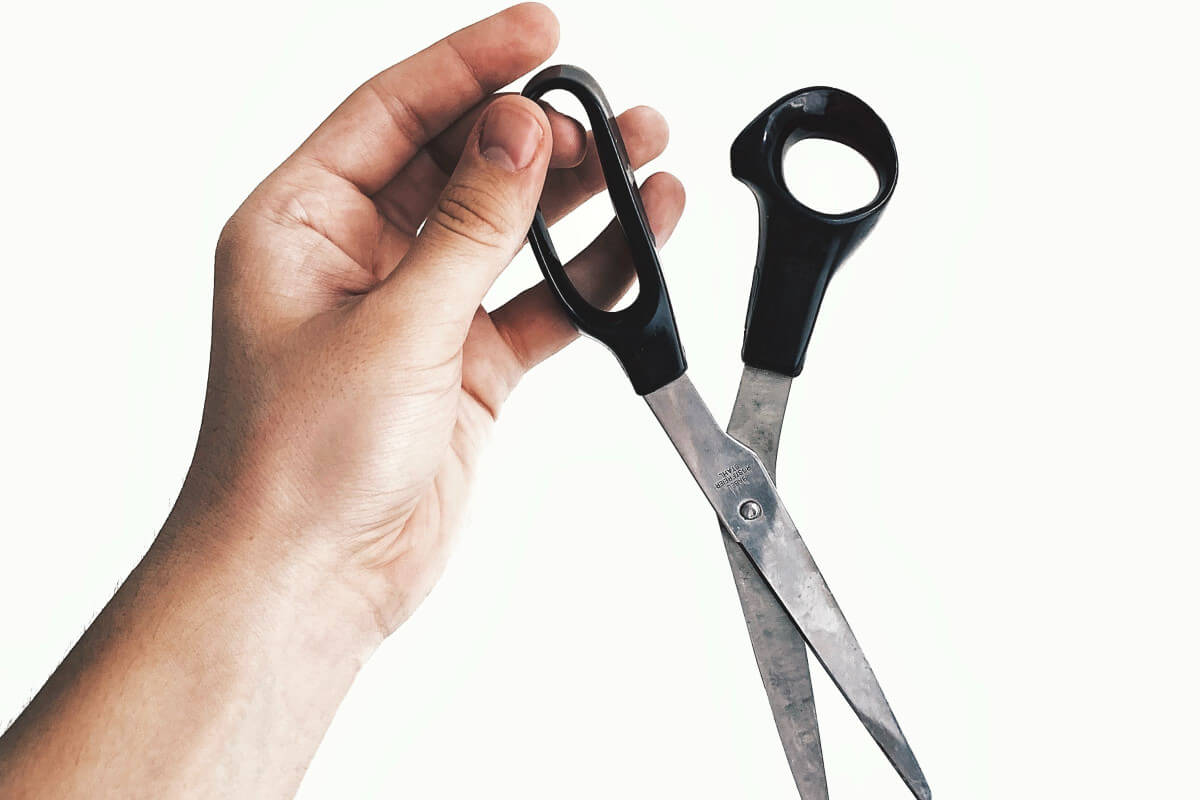 Your dog is a loving, cuddly pet that likes to stay around with you, but you have noticed that as soon as you pick up a pair of scissors, he will flee for his life!

He is so fearful of scissors that he will hide himself under the furniture or in one corner of the house, just waiting for you to put down that scissor in your hand.

This makes you wonder what’s going through his mind when he sees a pair of scissors?

Snipping Sound Of The Scissors Frighten Him

You may not be able to hear the snipping sounds of scissors when you are using them to cut things, but that is not the case for your dog!

He can easily perceive sounds from far away and dogs are naturally afraid of the snipping sound that comes from scissors.

They can get extremely frightened when they hear this sound because they are aware of what it means, that is, something is going to get cut.

The noise from the scissors may make your dog think that you are going to groom him again (which he simply hates).

He will start flickering his tongue, panic and run away or hide in his crate.

One of the common reasons for your dog to be wary of scissors is because he may have had an unpleasant experience with someone cutting his nails using scissors.

This makes him associate scissors with painful nail-cutting experience, and he may also start to exhibit this fearsome behavior in any other situation that involves cutting (such as trimming of his fur), even if the person who uses it is someone he is familiar with.

It could also be the case that it reminds him of the traumatic experience of losing all his fur when a dog groomer used scissors to cut all his fur. This makes him nervous and uncomfortable.

Appearance Of Scissors Frighten Him

When scissors is opened up, it might appear to your dog as a strange animal’s face looking at him.

The pair of “finger holes” resembles a pair of eyes and the opening blades look like an opened mouth to your dog.

In the case of a chunker scissor, it frightens your dog even more as the blades come with “teeth” and look like an aggressive predator to him.

This freaks him out and makes him flee for his life!

The Odor Left on the Scissors Stunned Him

You might have used scissors or knife to cut things that your dog dislikes (such as opening a package of spices) and that indirectly makes him get frightful of it.

Thus, it is important that you do a proper cleanup of scissors after each use.

Generally, washing scissors or knife with water and dish soap right after use will keep the odor away. Avoid using white vinegar or lemon to wash your scissors as dogs are fearful of the irritating scent from them.

Dogs have a natural fear of many things that are new to them, especially if they are sharp and pointy.

Scissors are a new and scary object for a dog to be exposed to because he finds them to be razor-sharp and dangerous.

And indeed, scissors are a lot sharper than they look.

When a dog encounters something that is sharp, it is instinctively for him to back away.

Your dog is afraid of scissors because he has seen them used in movies or on television and that creates an impression in him that they are dangerous things that he should stay away from.

How To Help Your Dog Overcome His Fear Of Scissors

If your dog is fearful of scissors, there are several things you can do. First, don’t force your dog to confront his fears.

Trying to force your dog to face something he is afraid of will only make him more nervous.

Instead, desensitize your dog to scissors through training and give him a treat every time he faces them calmly.

1. Start with a small, short scissor and make use of a positive reinforcement approach in your training.

2. You can make use of a clicker to assist you with the positive reinforcement training.

3. A clicker is a tool that is used to reinforce your dog’s desired behavior with a sound. The sound that is made by a clicker is called a “click” and is usually a very short, high-pitched sound. Your dog will learn to associate a click with a reward or a treat.

4. To carry out this training, have your dog come up to you when you hold scissors in front of him. Press on the clicker and reward him with a treat when he does so.

You will need to be patient in this training as it will take a while for your dog to overcome his fear and make that bold step.

Reward your dog with enticing treats such as pieces of cheese or beef, to make him feel that it is worth the risk of making that move towards scissors in return for the treats.

5. As he slowly felt comfortable with the training, increased the size of the scissors. Keep working with your dog until he has overcome his fear of it.