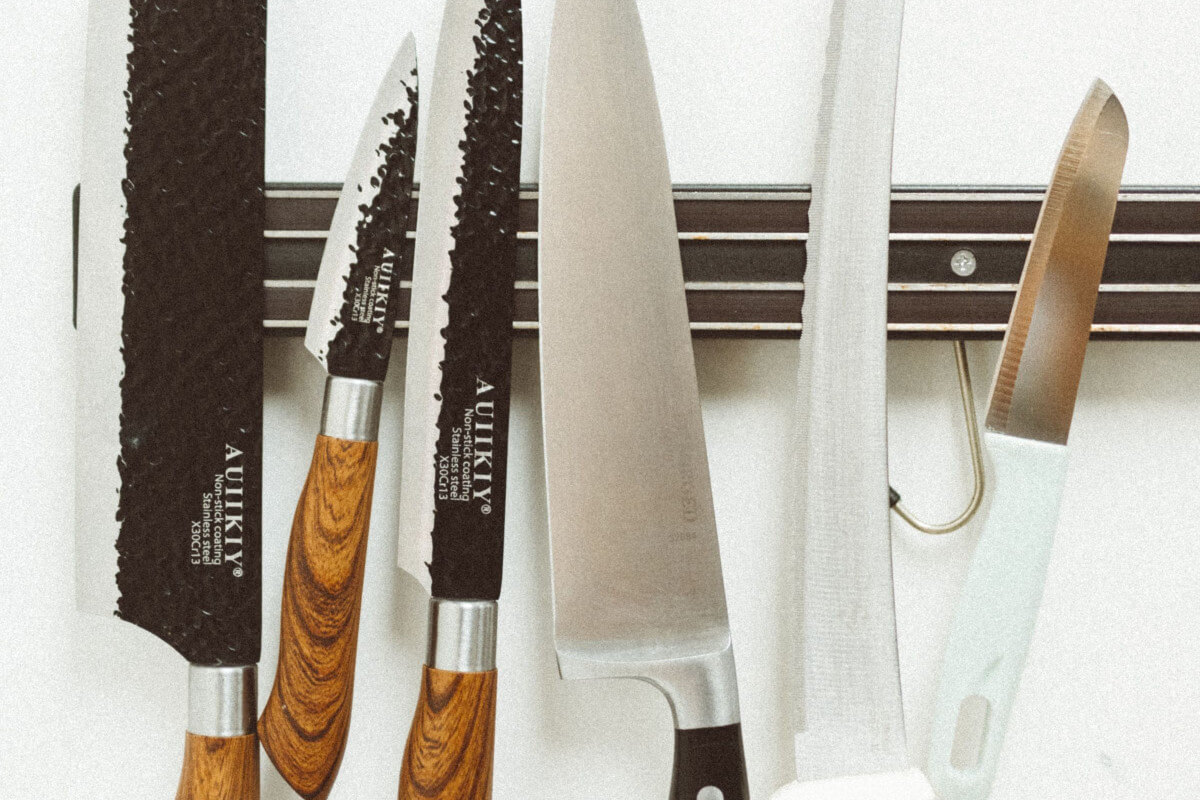 Did you find your dog staying away from you whenever he sees you holding on to a knife? Are you wondering what’s on his mind that makes him freak out?

Let’s read into a dog’s mind in this post!

The Sharpening Of The Knife Scared Him

There will be a time when the blade of the knife is blunt, and you will need to sharpen it.

If you are sharpening your knife on a whetstone, that will create a “shink” sound that can terrify your dog.

As you are aware, dogs possess acute hearing, and they can hear any noise (even those that cannot be picked up by our human ears) that is going on around them.

And of course, that irritating screeching sound when sharpening your knife on a whetstone is not going to escape from his “detection” as the sound is going to be rather loud.

He might find the sound to be annoying and frightening, and that make him want to flee from it.

That is the reason why you will often find your dog hiding in his crate (a place that he feels safe to be in when he is being crated trained) whenever you are sharpening your knife.

When you use a knife to cut any raw meat, the smell of blood will be released. And since your dog possesses an acute scent, he will be able to smell the presence of blood that is stained on the knife.

This makes him fearful of a knife as he associates knives with some sort of predators that prey on animals.

It is for this reason that the knife needs to be cleaned and sanitized after every use.

Immediately after each use, wash your knife with dish soap and hot water. Rinse thoroughly and let it air dry or pat it dry with a clean paper towel.

If your dog has a painful injury as the result of playing with a knife, that will have a long-lasting traumatic impact on him.

The pain that he had undergone as well as the fear of ever having the same thing happen again to him will make him stay far away from any object that resembles the shape of a knife.

He is associating knives with a life-threatening experience!

It could also be the case that he is trying to protect his previous owner from a robbery and gets stabbed by a knife and that leads him to be fearful of it thereafter.

There is a saying “Once Bitten Twice Shy” and that certainly holds in this situation.

The likelihood of your dog suffering from psychological trauma from the injury will be high, and he may need to seek medical attention to ease his mental discomfort.

Citrus Odors on the Knife Made Him Flee

If you have used a knife to cut fruits such as lemon and oranges, that may leave a scent on it if the knife is not properly washed and cleaned.

As you probably know, dogs are fearful of irritating scents such as those from lemon, oranges and pepper spices, and if they smell traces of such an odor on the blade, that would certainly make your dog stay away from it.

And that is exactly what happened to me when I used my knife to slice oranges for my wife.

As the knife is not properly cleaned, that leaves a trace of citrus odor on the blade, and scares my dog away.

So, always make sure that you wash the knife with warm water and scrub it with soap after each use.

Reflection From The Blade Of The Knife Terrify Him

When the sunlight shines on the blade of the knife, your dog sees a reflection from it and that terrifies him.

He sees the reflection appearing on and off (as the sunlight casts on the blade) and that makes him fearful of the knife.

He had no clue what that reflection was and if it was of any threat to him. The reflection can appear suddenly and goes off in a few seconds.

There is no scent associated with it and this freaks him out.

To prevent him from being threatened by the reflection from the knife, you’ll need to train him to ignore it.

An Object (Knife) That Can Cut Things Frightens Him

Cutting knives and scissors never fails to frighten any dog!

Your dog sees that a knife can cut things into many pieces and that grows his fear of it.

He senses the danger of it and starts associating it as a predator.

Just like a predator who will use his mouth to tear up and eat his prey, the action of a knife cutting on the meat resembles the act of a predator eating his prey!

This freaks him out, and he will start showing signs of stress and anxiety when he sees the action.

This is why you will find your dog keeping himself far away from you when you are using a knife to cut your food.

He will also try to avoid objects that look like a knife and will always be looking around and checking if there is any possible threat in the environment.