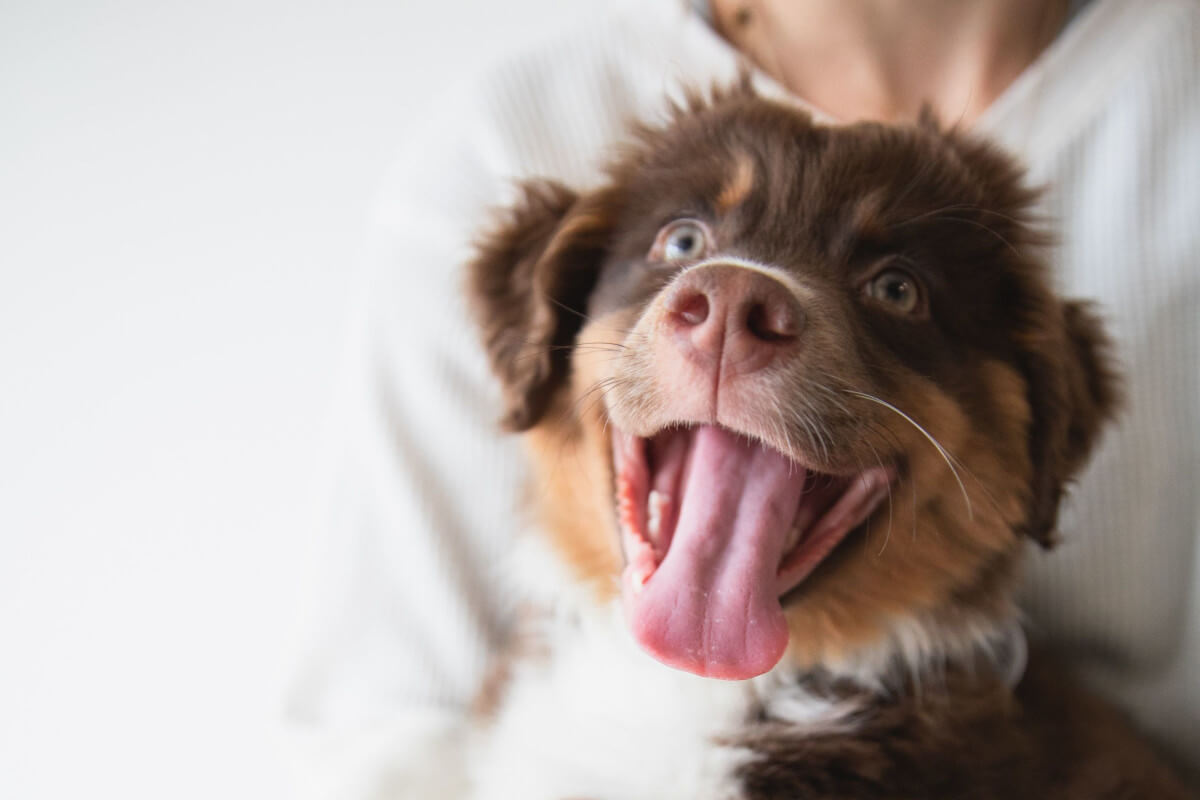 Do you ever see your dog flicking his tongue like a snake and wondering what he is going through? Could it be just his way of expressing his happiness or could there be something more to that?

In this post, we will learn more about that behavior.

Your dog is flicking his tongue because he feels anxious in a new environment and is trying to calm himself. It can also be an expression of happiness. It’s too hot for him, so he is trying to cool off. His tongue droops because he has no teeth to support it. He is removing debris from his teeth.

He Feels Scared and Nervous

It is normal for dogs to show signs of nervousness when they are in unfamiliar environments, meeting new people or animals. This is especially so if your dog is still not well socialized.

Keep a watch-out for the following body languages of your dog to determine if he is in fear:

If you notice any of the above signs of fear, try these tips for your dog:

It is important to identify what triggers his fear and anxiety and take steps to make him feel more comfortable in his environment.

This can be accomplished through positive reinforcement training. By doing this training, you can make your dog more confident and less anxious when confronted with his stimulus.

Positive reinforcement is a method of teaching a dog to perform an action or display a desired behavior in return for a reward.

It is based on the principle that behavior can be reinforced by giving the dog something he wants.

You will need to reward him when he does something right, so he knows that he will be rewarded for doing the right thing. If he does something wrong, you need to correct him and let him know that you are disapproving of his actions.

For example, if your dog is afraid of certain situations, you will need to find out what he is afraid of and then teach him to get used to the situation by rewarding him for doing so.

The goal of training is to change the dog’s behavior from fearful to calm.

Say if he is fearful of your visitor, you will need to have him approach your visitor in an environment where he will feel at ease and have the visitor feeding him with his favorite treat.

In this way, he will associate being close to your visitor with getting a reward (which is his favorite food).

If your dog has a fear of another breed, you will need to teach him to accept other dogs.

You can do this by using a clicker, which is a device that lets your dog hear a clicking sound when he is in the right behavior (which is behaving calmly when facing other dogs).

The sound will be paired with a reward, which can be a small treat or a praise from you. After a few rounds of clicker training, your dog will start to understand the concept of the “clicking” sound.

Do not force your dog to interact with other dogs.  Allow him to approach other dogs on his own time. Make it a rewarding experience for him!

You should train your dog to be obedient and confident so that he will always obey you and behave appropriately.

You will need to be consistent with your training, so that your dog learns that he has to follow your set house rules at all times.

He Is Feeling Relaxed

When your dog flickers his tongue, it is not always an indication that there is an underlying health or mental problem. It could just be a sign that he is feeling at ease.

If your dog has just eaten a tasty meal or had a fun time playing, he is expressing his happiness by flickering his tongue. This is his way of telling you that he is having a great time.

You can observe this through his body language, such as:

Heat Is Making Him Feel Uncomfortable

As opposed to humans, dogs have few sweat glands, with the majority in their foot pads. This is why you will often find your dog lifting his wet footprints on the hard surfaces during a hot day because he’s sweating!

But that is not the only way for your dog to cool off.

The primary way in which dogs regulate their body temperature is by panting with their tongue sticking out and flickering.

Many people think that dog’s tongues must also contain sweat glands because they cool down by panting. In fact, this is not true.

Panting plays two main roles in cooling down a dog. During panting, the tongue’s moisture evaporates, and the thick breath allows moisture to escape from the lungs’ moist lining.

This helps dogs to cool down their body temperature.

What is a Dog’s Comfort Temperature Zone?

A dog’s body temperature usually ranges between 101 and 102.5 degrees Fahrenheit and as long as your dog maintains that range, he should be fine.

Having said that, you would also need to take into consideration if your dog likes to relax under the sun. Temperatures exceeding 100 degrees Fahrenheit in the outdoors can easily lead to heat exhaustion.

Humidity can also prevent your dog from being able to pant effectively even if the temperature is below 100 degrees Fahrenheit.

Hence, if your dog is in the sun for a long period of time in high humidity and temperature condition, it is possible for him to experience heat stroke.

These are some signs of heatstroke to watch out for your dog:

You can use these symptoms to determine whether your dog needs a cooler environment or if he can still remain outdoors.

Is Your Dog at Risk for Heatstroke?

Size does not have a huge impact on whether your dog can handle hot temperatures, but it can still have a minimal effect if it is a giant breed such as Great Dane, Mastiff, Leonberger and Bullmastiff.

Generally, smaller dogs such as Chihuahuas, Pomeranian and Maltese can tolerate higher temperatures than larger dogs, but there are exceptions.

Dogs that are overweight, very young, old, or belong to a brachycephalic breed such as French Bulldog, Boxer and Pug, will have a tougher time managing their heat regardless of their size.

Furthermore, dogs with dense coats such as Akita, Chow Chow and Keeshond will have a harder time staying cool than their counterparts with short or thin hair such as Bull Terrier, Dalmatian and Ibizan Hound.

Dental Disease or Hanging Tongue Syndrome in Your Dog

Essentially, hanging tongue syndrome is the condition where your dog’s tongue hangs out of his mouth, and it is not connected to any other health issue.

Genetically, brachycephalic dogs (dogs with flattened face) are prone to having this condition. It could be that they have tongues too big to fit in their mouth, or that their jaws aren’t strong enough to support their tongues properly due to genetic factors.

However, genetics may not be the sole cause of Hanging Tongue Syndrome in dogs.

A severe dental infection can cause lower teeth to rot. As these diseased teeth fall out or are extracted, the tongue is left with no support, so it hangs out either to one side or out the front.

Your veterinarian should be consulted, since some oral cancers or tumors may also cause the tongue to droop.

An Object Stuck Between His Teeth or Gums

Flicking the tongue is a reflex action dogs use to remove debris from the mouth. It’s especially true when an object gets caught in their teeth causing them great discomfort.

Unlike humans, dogs cannot use their “hands” (which are their paws) to remove objects stuck between their teeth.

Thus, they use their tongue to dislodge objects stuck between their teeth. This is accomplished by “flicking” their tongue at the stuck object.

So, keep a watch-out on your dog’s body language. If he begins to show signs of discomfort, such as drooling or licking his mouth, perform a visual inspection on his mouth to see if there is any object that gets stuck between his teeth.