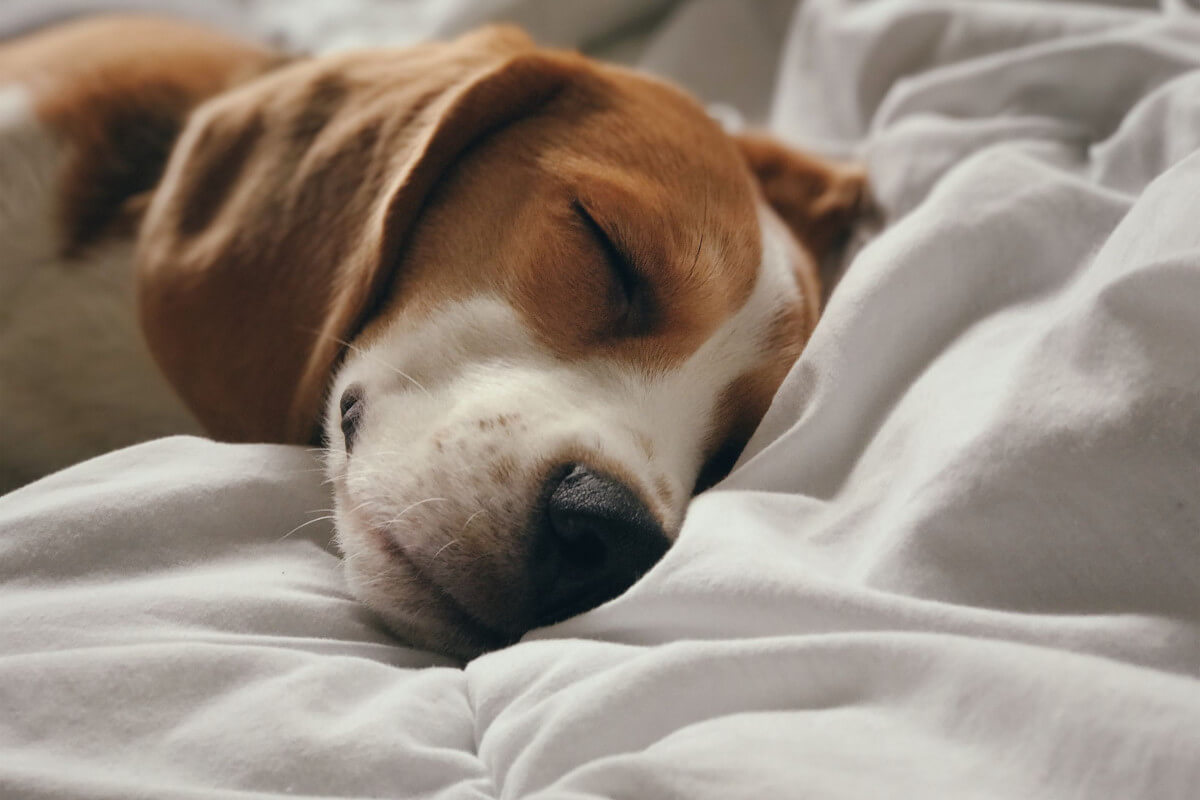 Have you ever wondered why your dog seems to have a special affinity for your bed and likes to rub his face on it, more than anywhere else?

Well, Fret not! I will share with you the various reasons as to why your dog is behaving in this manner.

When your dog rubs his face on your bed, he could be marking his territory, relieving his face itchiness, to take a sniff of your scent from the bed as he is missing you, doing his grooming, easing his boredom or dental discomfort. He could be doing an investigation due to an unfamiliar scent on your bed.

Dogs mark their territories by leaving their scent on objects or places through their urine, feces or rubbing their body on them.

So, if you find your dog persistently rubbing his face on your bed, he is trying to leave his scent on your bedding to mark that as his territory.

(You should be thankful that he didn’t pee on your bed!)

When he does this, he is trying to let others know that this is his turf and no one should mess with him.

To correct this behavior, you would need to assume the role of the Alpha and be his leader.

Then, he’ll do almost anything that you want from him.

The 3 factors that are crucial to establishing your leadership in your dog are consistency, body language, and training.

First, you’ve got to be consistent.

Never change your behavior towards him unless it is for a good reason.

For example: If you are training your dog to stay off the couch, and you see him sitting on it, you should get him off the furniture immediately by telling him “get down” in a calm and firm tone.

Do not give him a chance to remain on the couch as that would send him a confusing “signal” that he can sit on the furniture.

You have to be consistent in your expectations and training and that is crucial! You cannot expect your dog to understand what you want if you are not clear about it yourself.

So, the first thing that you must do is to be clear about what you expect from him and then train him on that basis.

Remember to always praise your dog for his good behavior!

The second factor is your body language.

Your dog is good at reading your body language. If you want him to stop doing something, don’t fiddle with your clothes or hair, or scratch your head and nose or whatever.

Instead, stand up straight, face him, make eye contact and give him a simple, clear, calm order.

Once he realizes that you are serious, and you mean business, then he will quickly learn to stop the undesirable behavior.

The third factor is training.

Get him started on obedience training so that he will respond to your commands.

A big part of a dog’s success in training is the amount of positive reinforcement that he receives while he is doing the behavior that you want him to do.

Praise is the essential ingredient in any training formula.

It is what keeps a dog motivated and makes a training program work.

If you have a tough lesson to teach your dog, you must be creative in finding ways to praise him for doing what you want him to do.

If you don’t give your dog enough praise, he will soon lose his enthusiasm and his interest in what you are trying to teach him.

Once he understands what you want and knows how to follow your instructions and gets the praise and reward he is hoping for, he will trust your leadership and look upon you as his pack leader.

Your dog could be rubbing his face against your bed to ease his itchiness in his eyes, nose, mouth or ears.

You see, itchiness is the body’s way of trying to get rid itself of the “invaders”.

This is likely caused by a skin allergy or sensitivity, parasites or ear mites.

He could have fleas picked up from another dog or cat when he is in the park, or ear mites that presence in his ears make him vulnerable to itchy ears.

Ear mites are microscopic arachnids (a type of spider) that live in the outermost parts of a dog’s ear. They are usually found in large numbers in dogs with ear infections.

They are very common and will cause your dog’s ears to be extremely itchy!

If you notice any signs of your dog having an allergic reaction, like redness and swelling around his face, eyes and ears, drop everything and take him to the vet immediately.

Your vet will likely prescribe a short-term treatment for the fleas such as the use of Ivermectin, and you’ll also need to treat your dog’s skin with an anti-itch cream such as Betadine.

Your Absence Is Missed By Him

If you find your dog likes to rub his face on your bed when you are not around, the following could be the reason.

He is missing you!

You see, as you sleep on your bed daily, it is natural for the bed to be “covered” with your body scent.

And when your dog finds that scent, he will literally rub his face in it, trying desperately to get close to you so that he can be reassured that you are still there for him.

If this is happening to your dog, he could likely be suffering from separation anxiety, and you would need to correct this behavior as soon as possible.

Start by spending more QUALITY time with him.

This includes playing some interactive games such as tug of war or “hide-and-seek” where he can actually win something (like a little tug toy).

Do this several times per week to gradually build up his trust in you and let him know that you are not ditching him.

Next, start him on crate training so that he knows that when you are busy, there is a place where he can go that is just for him.

Make the crate his “safe place”, a personal secure premise that he feels safe to be in, just like a den.

Give him some cozy bedding, a couple of his toys, and a little bowl of food in the crate.

You can also leave some of your old clothing that comes with your scent in the crate as well.

This will make him feel that you are somewhere near him when he is in the crate.

Also, introduce him to your family members so that he will be less dependent on you as he has other people to rely on when you are not with him.

Remember, never punish him for being anxious; instead, use positive reinforcement to help him overcome this undesirable behavior.

Make him learn that by going to his den when he is feeling lonely and anxious, good things (such as him getting to play with his favorite toys, food and affection) will follow.

Also, make sure that he has some errands to do in the house, such as fetching newspapers or collecting laundry for washing and so forth.

These activities will help to take his mind off of being cooped up and keep him busy.

Do you happen to have anyone in your bed recently?

Maybe you have a newborn baby, and you leave him in your bed for feeding?

This could possibly leave a new scent that your dog is unfamiliar with and that triggers his curiosity and makes him start his investigation.

The way he does it will be to rub his face on your bed to get a better sense of the smell.

If he likes what he smells, he’ll keep going and exploring. But if not, he’ll stop, sniff the air, and eventually go away.

This is how dogs investigate things.

His Boredom Is Getting To Him

Boredom in dogs is often caused by an unfulfilled need to satisfy instinctual desires.

When this happens, your dog could become agitated and exhibit various abnormal behaviors such as pushing his head into you, pawing at the door, pacing back and forth, or even chewing on things.

He will also become more curious about everything around him.

He will be very interested in new things he sees or new scents that he smells and will try to get as much information about them as possible.

What you would need to do is to plan activities that will keep his mind occupied with interesting and stimulating things.

Make sure he gets enough exercise too. This will keep him fit and healthy, which will make him less likely to become bored.

Get him to play some engaging physical games such as tug of war, fetching a ball, playing flirt pole or hide-and-seek.

Or take him for long walks where he can sniff out interesting things such as grass, soil or plants.

In short, don’t leave your dog bored. Make sure he gets enough exercise, mental and physical challenges to help him release his pent-up energy.

He Is Doing His Grooming

Your bed offers a soft and comforting sensation for your dog to do his grooming.

This is why he is rubbing his face against your bed, to clean up his face, or he simply finds this behavior makes him feel good.

It’s like you giving him a morning rub as the bed is full of your scent.

This is also his way to make him calm down when he is feeling stressed or anxious, as your scent on the bed gives him comfort.

What would a dog do when he has mouth discomfort such as a tooth pain or gum infection?

He will either be chewing things to ease his pain, rubbing his face against some other object to get some relief or shaking his head after eating.

This is also his way to get your attention for help.

So it’s important that you do a routine check on his teeth and gums by gently opening his mouth and performing an inspection.

Do pay attention to his tongue as well. Does it have a yellowish or grayish tint to it? This could be an indication of a problem with his overall health.

Pay close attention to the areas around his mouth and nose because these are some of the most common areas where dogs get infections.

If you notice anything unusual, don’t hesitate to contact your veterinarian right away.