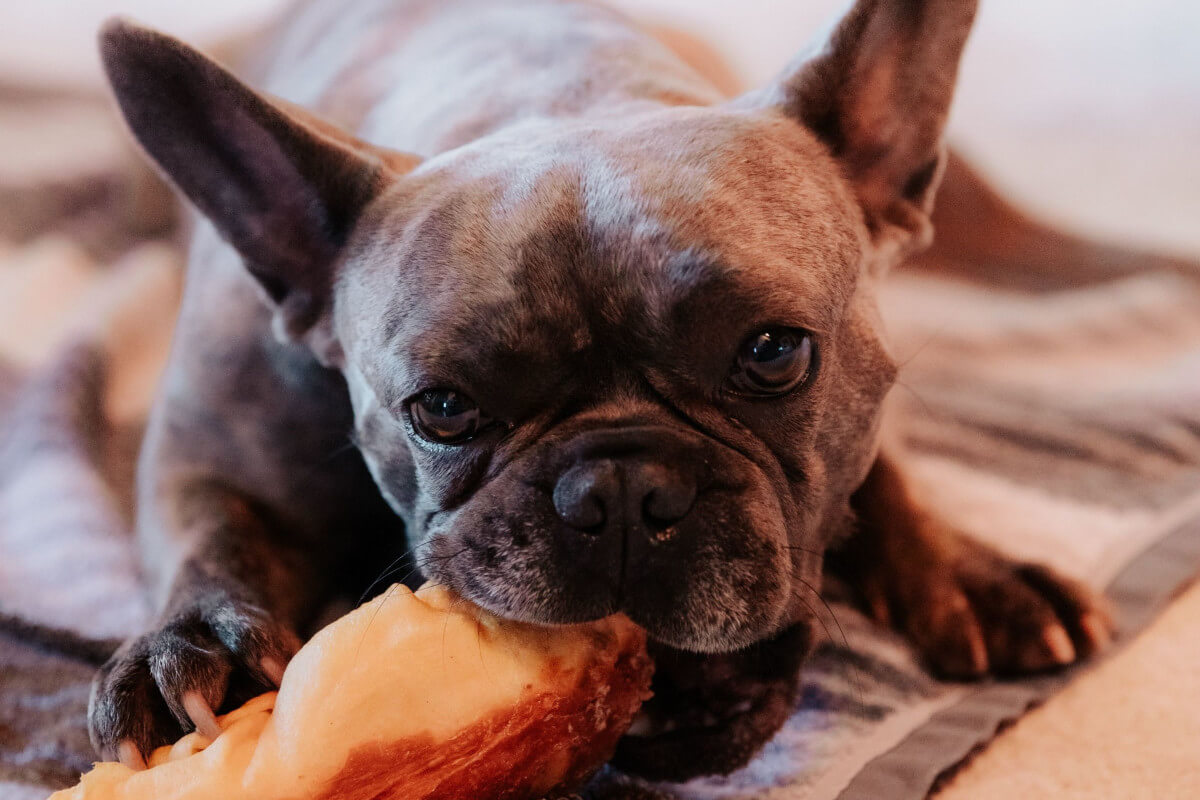 When your dog keeps shaking after eating, he could be allergic to the foods he eats, eating too much and too fast, having dental discomfort or eating cold and contaminated foods. He may have developed a negative association (FEAR) with eating, suffering from GERD or being infected with intestinal parasites.

By knowing what the possible explanations for this behavior, you can take action and prevent your pet from being sick.

One of the common reasons for your dog to be constantly shaking his body after eating is that he has an allergy or is sensitive to something he ate.

This can happen if your dog has an adverse reaction to some specific food such as chicken or cheese or food additives and ingredients that are commonly found in commercial pet foods.

Symptoms such as vomiting, diarrhea or rash on his skin right after he eats could also indicate his food allergy.

Stop feeding him that particular brand of food and switch to a different brand or homemade food.

So it is important that you get to know what’s causing your dog’s allergy.

Say if he is allergic to chicken, you can switch to different types of meat such as lamb or beef.

It is possible that your dog has an adverse reaction to a type of preservative used to keep his food from going bad.

Most pet foods are preserved with sodium nitrate, which is used to prevent microorganisms from growing or reproducing.

In that case, you might want to go for organic food or to prepare some homemade food for your dog.

Eating Too Much And Too Fast

I’m sure you might have experienced an occasion when you are eating too much or too fast and that’s causing much discomfort on your stomach.

Your tummy will get filled up with gas and air, and you will feel uncomfortable for a short period of time.

Well, this can also happen to your dog when he starts to swallow his food swiftly or when you have overfed him.

He is feeling discomfort in his stomach and shaking his body is his way to ease his “upsetting” tummy.

This shaking behavior can continue until he feels better.

To resolve this problem, slow down your dog’s eating speed or make him chew each bite of food for a longer period of time.

To accomplish this, you can place the food in a slow feeder bowl or only place a handful of the kibble on his food bowl and refill it slowly once he is done with each serving.

This will make him slow down his eating pace and allow his stomach to empty out the unwanted air and gas.

Do you ever have that instant where your body starts to shiver because of the icy drinks or ice cream that you are having?

This can happen to your dog as well if you are giving him frozen foods for his meal.

Your dog’s metabolism has to work extra hard to keep his body temperature regulated and when he gets too cold, his heart will beat faster and his body will also start to shiver.

What you can do is to let his frozen food thaw in the microwave oven before feeding him.

If you are serving him with dry kibbles, you can add some warm water to it to soften and warm up the food a bit.

Just be mindful not to add too much water as that will make the kibble too soggy, and your dog might turn away from the food.

He could have eaten something contaminated and that was causing him to feel unwell and his body start to react by trembling.

For example, the food that you are providing him is causing his tummy to get upset.

Or he might be eating grass or soil in the garden or eating stuff that he had found in the trash right before his meal and that is causing him to feel sick.

It is also possible that you may have left your medicine on the table while you were preparing his food and he got it in his mouth.

If your dog starts to vomit, has diarrhea or just looks generally unwell, you need to take him to the vet immediately.

Don’t wait until the next day as it might be too late by then and your dog could be seriously ill.

Pain In His Mouth

If you find your dog keeps shaking his head as he is eating his food, it could be a sign of dental discomfort.

He could be having dental issues such as an infected tooth, a loose or damaged tooth, swollen gums or something getting stuck in between his teeth.

This is causing him much soreness whenever he tries to chew his food, in particular if you are giving him big pieces of meat which he can’t swallow and needs to chew.

That is when you will see him keep shaking his head or rubbing his face as he is eating his food.

What you can do is to perform a regular check on his teeth and gum to ensure that there are no signs of infection.

Standing While Eating Cause Arthritis Pain

For older dogs, it is common for them to suffer from arthritis and joint discomfort, and they will feel the pain if they need to stand up while eating their meal.

So, if you have an elderly dog, and he needs to stand up to reach out for his food (because you left it on a small table), that could explain why he keeps shaking his body as he is eating his food.

It’s just his natural way of trying to cope with the discomfort of arthritis.

In fact, many senior dogs (over 10 years old) develop a condition called osteoporosis.

This is a painful disease that affects the bones and causes them to become brittle.

As they age, their joints become less flexible, and they begin to ache.

What you can do is to minimize the need for him to move around or stand up.

Place his food bowl on the floor rather than on a table so that he can easily get hold of his food without the need to stand up and that should ease his discomfort.

Your dog could have developed a negative association with eating and that makes him shake his body (due to FEAR) as he is eating his meal.

For example, he could have an unpleasant experience of having his food get snatched by another bigger sized dog in the shelter and that makes him associate the act of eating with something bad going to happen.

Or he may have had a bad experience when he is being fed by his previous owner and that makes him associate the act of feeding with unpleasant consequences.

Whatever the case, it is important that you correct this problem immediately or else your dog will start avoiding food and that can lead to life-threatening situations for him.

Another possibility is that he has worms or some other type of intestinal parasite.

These microscopic creatures (tapeworms) live in his intestines and cause him discomfort.

Often, a dog with worms will experience diarrhea, vomiting and weight loss because the parasites interfere with his normal digestion and absorb the nutrients from the foods he eats.

In serious condition, this issue can lead to intestinal blockages.

Your dog will also perform actions such as scooting around on his bottom instead of walking or shaking his body constantly as he tries to get rid of the parasites which make him feel uncomfortable and irritable.

You can tell if your dog has worms by looking at his feces. If you see little white eggs in it, it’s likely that he does have them.

If that is the case, you should get your dog checked by your vet as soon as possible.

Don’t wait until he is seriously ill because it may then be too late to save him.

It’s not merely humans who will suffer from GERD. Dogs will also experience the same affliction.

In fact, many dogs seem to have it worse than humans.

When your dog ingests too much food or drinks too much water, his digestive system works tirelessly to process all that excess.

This puts a tremendous amount of stress on his entire body.

His stomach and esophagus get so irritated, and it causes his gastric fluids to seep up through his esophagus into his mouth and throat.

This will cause discomfort and your dog will try to alleviate this by shaking his head.

You can help to minimize the chances of him getting GERD by giving him smaller portions of food on more frequent occasions.

This will give his stomach and esophagus time to recover between feedings.

Keep in mind that GERD is caused by too much acid in the stomach.

Therefore, if possible, try to find a holistic vet who will prescribe an over-the-counter antacid medication for your dog.