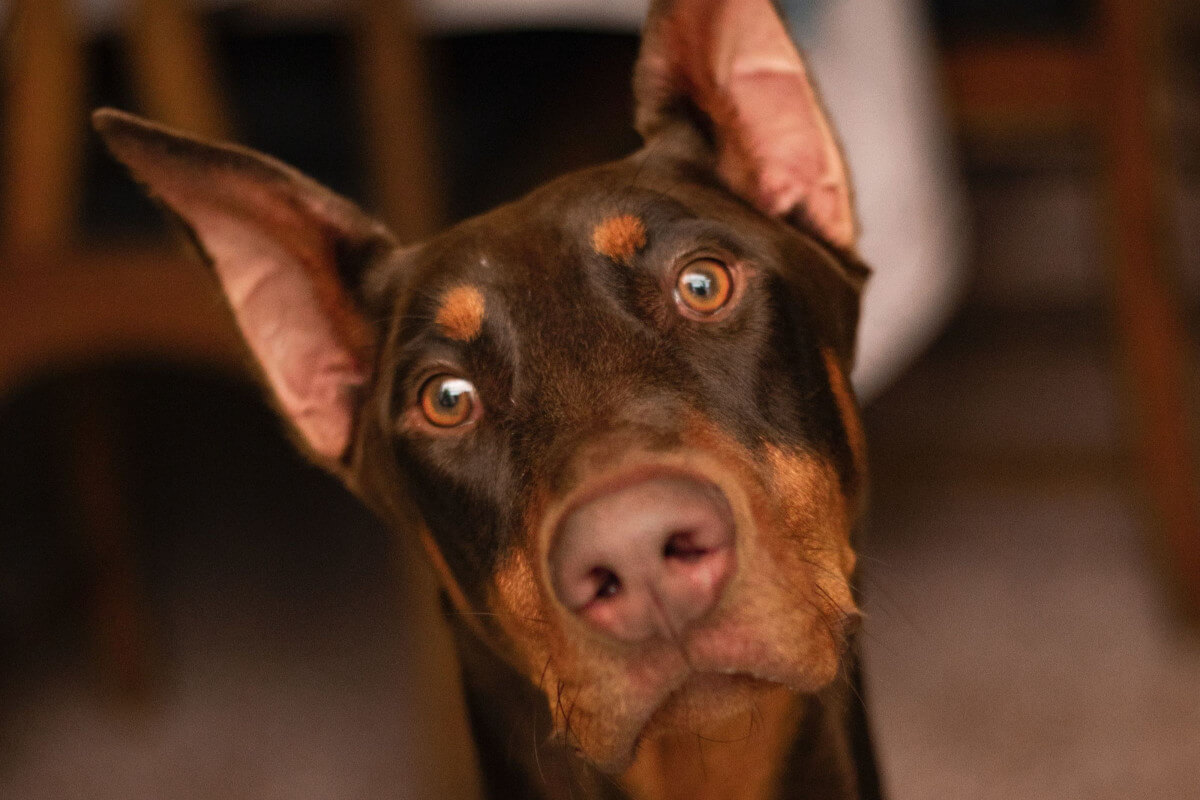 There could be many reasons as to why your dog is staring at the ceiling, ranging from health issues, emotional distress or behavior modification.

Staring at the ceiling is certainly a non-threatening activity, but you would want to make your dog stop this bad habit, wouldn’t you?

Therefore, it’s very important that you understand why your dog is performing this action and what you can do to correct the situation.

Your dog could be staring at the ceiling for various reasons, such as being attracted by the reflected lighting, cold breeze from the ceiling, sounds from ceiling fans, pests loitering on the ceiling, cracks and stains on the roof, boredom or health issues such as focal seizure, OCD and CCD disorder.

Do you know what makes a dog’s eyes shine? It’s the reflected light.

Your dog is attracted by the reflection lights and shadows cast on the roof, and that makes him keep staring at the ceiling.

He is getting curious and wants to know what’s out there.

You see, when a dog’s natural curiosity is aroused, he will begin exploring and discovering things around his environment.

This will give him a sense of satisfaction and fill him with delight and excitement.

He had an insatiable desire to investigate everything within his reach.

To prevent your dog from being distracted by this “lighting”, you can put up curtains at the windows to block the sunlight from “entering” the house and casting on the walls and ceiling.

Or you can have him in a room where there are no windows, such as your bedroom.

Cold Draft Above Him Sparks His Curiosity

Is his sleeping bed facing the outlet of an air conditioner and the cold breeze is “blowing” right at him?

This could be the reason why he is staring at the ceiling.

In fact, he is looking at the air conditioner and is wondering how this “cold breeze” came about?

Your dog could be amazed by the moving fans that hang on the ceiling.

He is wondering what’s that moving object in the ceiling that provides a cool breeze when they spin.

And when he looks up, it seems that they are moving non-stop and providing an endless supply of cool air.

Apart from the breeze, the moving fans also provide noises that will also amuse your dog. The noise comes from little metal things attached to the moving fan blades.

You will need to train your dog to desensitize him to the noise and the movement of the fan blades.

Once your dog has been trained to accept this level of noise and movement, he will be reacting to it calmly.

It’s common to see pests such as ants, lizards, cockroaches, beetles, fleas and ticks in the house.

Your dog could be keeping a watch on them as they appear on the ceiling or walls of your home.

As it’s the nature instinct for dogs to be curious, he will keep watching where these pests are going to and this is where you will notice him acting strangely.

He is doing his “investigation” job and to alert you once he is done with his finding.

Stain Or Crack On Ceiling Draws His Attention

You might not have noticed if there are any stains or cracks on your ceiling as you are not going to keep staring at your ceiling unless you are painting the ceiling or cleaning your ceiling fans.

But for your dog, he is extremely observant, and he will notice those stains and cracks on your ceiling immediately.

This is especially so if there is any water leaking from the cracks, resulting in stains or drips from your ceiling.

If this happens, you will likely find your dog persistently staring at the cracks or stains on the ceiling, and he will also alert you through his barking.

When your dog is bored, he will start to exhibit numerous “abnormal” behaviors such as chewing, digging, excessive licking, over excitement, pacing as well as staring at the ceiling.

These are all warning signs that your dog is beginning to experience anxiety and stress.

When this happens, it is imperative that you do something about it immediately. Don’t wait until he destroys your carpets or furniture.

Provide an outlet to help him release his pent-up energy to do away with his boredom.

Keep him physically tired by playing some interactive physical activities such as Frisbee, fetch, flirt pole or tug of war with him.

Give him some mental challenges, like learning new tricks, playing hide-and-seek, or teaching him some obedience commands.

These activities will help to stimulate his brain and make him mentally tired.

Get him busy by giving him a job to do around the house, such as collecting clothes for laundry or fetching newspapers and also get him some chewing toys to keep him busy with the chewing.

The goal here is to keep his mind occupied, so he will find himself busy for the day and will not stare into space.

Sounds From Ceiling Trigger His Interest

If you are living in a high rise apartment, it is inevitable that your neighbour (staying at the upper level) may create some noise and that sounds will trigger your dog’s curiosity and make him keep staring at the ceiling.

What you can do is to make your dog learn that it is going to be much more rewarding to stare at you rather than at the roof when there are sounds coming from the ceiling.

To accomplish this, you would need to get ready some high value meat treat (such as chicken, salmon or hot dog) and give it to him the very moment your dog decides not to stare at the ceiling when there are noises coming from there and give you his attention.

The way to do this will be when he is staring at the ceiling, calling out his name and if he responds by looking at you, give him a treat immediately.

This way, he will learn that GOOD things will happen when he stops looking at the ceiling and gives you his attention. This technique works like magic!

Over time, you can gradually do away with the treat and just gently rub his chest to show that you are happy with his reaction.

For example, he may spend an inordinate amount of time grooming himself when no one is watching or keeps staring at the ceiling for no obvious reasons.

He may also exhibit odd eating habits like licking his lips after every bite or drinking an enormous amount of water even though he doesn’t seem to be thirsty.

All these are signs that your dog may have OCD.

In fact, OCD is a common problem in dogs and can cause them a great deal of stress and discomfort.

They simply have an emotional block which prevents them from doing what they know to be correct.

If you suspect your dog is suffering from OCD, you should bring him to see a vet for treatment as soon as possible.

When your dog is reaching his golden age, he is more likely to suffer from health and mental related disorders and one of the most common disorders is canine cognitive dysfunction.

This is a very similar condition to senility in humans, and it is characterized by mild to moderate intellectual impairment, disorientation and memory loss.

Dogs suffering from this disorder will often undergo behavior changes such as sniffing the air and looking up, keeping themselves away from their owners, house soiling as well as starting to get fearful of shadows.

There are many causes of CCD, but the most common one is aging and the degenerative effects of natural diseases on the brain.

Your dog could be suffering from focal seizure disorder as the result of some health related complications such as brain tumors and trauma, liver disease, kidney failure or toxins.

This will lead him to experience hallucinations (which make him keep staring at the ceiling though there isn’t anything to focus on), changes in his vision and hearing, causing balancing problems as well as involuntary movements.

You should bring your dog to see a vet for a health checkup immediately so that he gets the necessary treatment. Don’t put off this important step!

Remember: A focal seizure disorder is treatable but must be caught early! Don’t wait until your pet is having a full-blown seizure before you take him to a vet for an examination.

A BAD Habit That He Had Picked Up

Did your dog only exhibit this staring behavior recently? If that’s the case, it could be a bad habit that he has picked up lately.

If you left him in pet boarding while you were on a vacation, he could have picked up this bad habit from another dog.

This would explain why he only shows this behavior when you bring him back from the boarding.