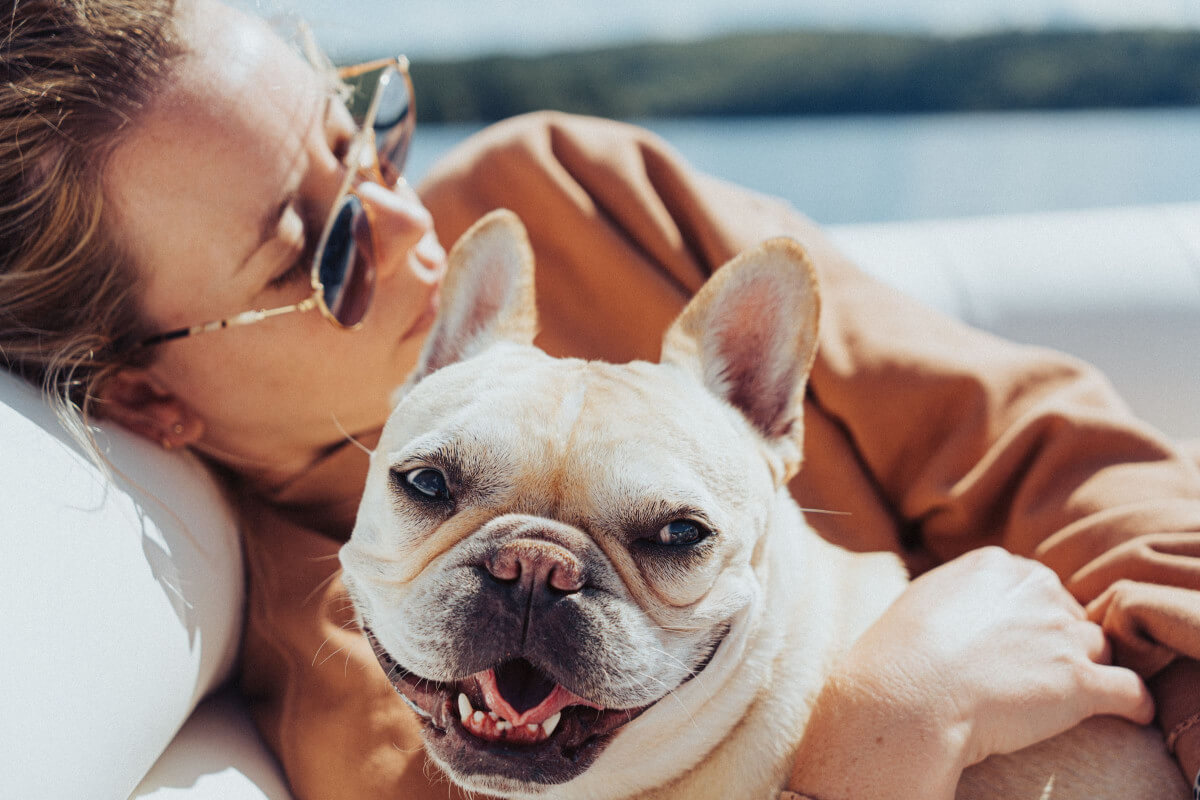 Did you find your dog loves to do this behavior, which is pushing his head into you? If so, there’s a good chance that he is probably trying to show you his love and trust.

But having said that.. There could be more reasons behind this behavior.

If you are able to figure out why your dog exhibits this behavioral pattern, then you’ll be better informed on how to correct this undesirable habit.

When your dog pushes his head into you, he is expressing his love gesture for you or offering you his console. He could be seeking your attention to address his needs or claim ownership of you. Emotional behaviors such as feeling bored, guilty, jealous or terrified could also cause him to react in this manner.

He Is Expressing His Love Gesture

Your dog certainly can’t hug you or vocalize his love for you like what we do.

What he can do is to push his head into you as his way to tell you that he loves you.

Of course, this is not the only way for him to express his love and trust in you.

You may also find other behaviors, such as him wagging his tail to you, licking your face and feet, looking at you with his adoring eyes, etc.

Thus, it is important for you to understand these gestures because they will help you understand more about your dog.

You could possibly give him a stroke on the top of his head or rub his ears, which would be a sign of your affection for him.

This action is called “petting” and is a very common gesture of affection from dog owners to their pets.

In addition, you could also give him a treat for doing something that you want him to do and that will show him that you appreciate his obedience.

This lets him know you are trustworthy. Trust is a big deal for a dog.

Remember, dogs are very expressive creatures, and you should never underestimate the amount of love a dog has for his owner.

He Is Claiming Ownership Of You

When your dog is pushing his head on you, he could be saying that you belong to him.

If he does this often and consistently, it means he considers you as his inferior and wants to assert his superiority over you.

This is his way of claiming ownership of you and your space. It’s a very Alpha thing to do, and it happens mostly when your dog is being dominant.

Apart from this behavior, your dominant dog could also exhibit various other behaviors such as growling, barking or even biting at you when you ask him to give up his toy, treat or follow your commands.

To correct his dominance behavior, you will need to start him in obedience training and make him see you as his pack leader.

Make him learn that it is going to be a rewarding experience to obey your commands through positive reinforcement.

Teach him that when he listens to you, you are going to reward him for doing what you want him to do.

The rewards could be in the form of treats, petting or praise.

And that when he disobeys, he is punishing himself by getting a time-out or losing his privilege to play.

He will quickly learn that GOOD things will only happen when he behaves submissively.

He Needs Your Attention

This could be the case where he needs your help to address his needs, or he is feeling unwell.

He may be going through a difficult time in his life and needs some space and attention from you.

This would likely happen if he has lost his companion lately and is feeling lonely.

If this is the case with your dog, you may need to keep an eye on him for a few days and give him as much attention and affection as he needs at this time to help him overcome this temporary difficulty.

You may want to consider getting him another companion to help him take his mind off the depression and loneliness.

I would suggest getting the same breed as his previous companion.

Or it could be due to his physical urges, such as hunger and potty needs. For this issue, you would need to review his feeding and potty schedule.

Make sure that your dog is well-fed (you will need to revise his feeding frequently and the type of meal he is getting as he grows up) and you will have to designate an indoor and outdoor potty area for him.

Start him on potty training so that he knows where to go for his potty needs.

Lastly, he could be feeling unwell, such as having joint pain (due to aging) or suffering from parasites “attack” and he needs your help to address his discomfort.

Sometimes, it is hard to tell what the cause of a behavior is. You just need to be observant.

He Is Consoling You

Dogs are emotional sensitive animals and that is why they are well liked by many pet owners.

They have a very keen sense of feeling and will respond to their owners emotional states (happiness or sadness) with their actions.

If you are sobbing or grieving, your dog will experience that sadness too and will try to offer you his comfort by sleeping his head on your neck or hugging you with his paws.

This is his way of letting you know that he is here for you!

He is offering you his comfort and solace at this moment and every other moment of your life.

That is why dogs are so popular among people who are experiencing difficult times in their lives.

They know that dogs are always there for them and will comfort them with their love and concern when they need it most, as dogs have an incredible affinity for love and loyalty.

Boredom Is Setting In

When your dog is getting bored, he will find ways to keep himself entertained, such as pacing back and forth, digging, chewing on things, licking himself or staring into space.

He may also push his head into you just to tell you “I’m feeling very bored” and wants you to play with him.

So, it is important that you plan some activities for him daily to keep him busy.

Make sure that he gets enough exercise too, as this will help to release the pent-up energy in his body and keeps him less energetic.

Some physical activities that you can plan for your dog include taking him for a long walk, playing fetch with him, letting him run freely in a fenced-in yard, or playing a game of tug of war with him.

Apart from physical simulation, you should also include some mental activities such as puzzle games, hide-and-seek, and training your dog to obey simple commands.

These mental simulation activities will make your dog utilize his brain power and make him mentally tired.

As the saying goes, a tired dog is a good dog.

So make sure that you provide an outlet for your dog to let off his excessive energy, and you will have a well-behaved and obedient dog.

Your dog may have done something that he knows is not right (such as digging the trash, improper potty), and he is feeling guilty about it.

By pushing his head into you, he is trying to seek your forgiveness.

As he couldn’t possibly tell you that “I’m sorry, please forgive me”, he is using his way to express his feelings.

It’s the most primitive form of communication he has.

You can further observe from his other body language, such as tucking his tail between his legs, lowering his ears and avoiding your eye contact.

Don’t get angry at him or scold him when you find out about his accidents.

What you need to do is to let him know that you have forgiven him by reassuring him that everything will be alright.

Give him some love and affection by petting him.

By doing this, you are showing him that there are no bad feelings on your part, and that you are not angry at him.

This will have a calming effect on him.

Next, you should find out why these accidents happen (digging trash because he is bored and hungry, improper potty because he could not hold his bladder due to health issues) and work on addressing these issues so that they will not happen again.

Jealousy Is In His Heart

Did your dog start reacting in this manner when you adopted a new puppy recently?

You see, if your new puppy becomes the center of your attention, it could trigger your residential dog’s jealousy.

He is finding that you are spending less time with him, and he is trying to make sure you don’t forget about him by pushing his head into you.

If this is the case, you will want to spend more time with him.

Play with him, give him attention and praise him for good behavior. If necessary, take him for a nice long walk or go for a ride in the car.

The idea here is to reassure him that you still consider him to be very important in your life.

Also, keep him away from your new puppy till he no longer shows signs of jealousy.

Keep in mind that a jealous dog could potentially attack your puppy as he feels that the puppy is a threat to him.

You will need to train him and make him feel that by having another companion in the house, he is getting more attention from you than he would otherwise get.

If you find your dog doing this only on certain occasions, such as when there is a thunderstorm, fireworks or unfamiliar faces in your home, this is his way of easing his nervousness.

Your dog looks upon you as his protector, and expects you to keep him safe and sound. So, by pushing his head into you, he knows that you will keep him safe from any lurking danger.

You will likely see him burrowing his head into your armpit as an attempt to stay closer to you if you held him in your arm.

As I said, this is perfectly normal behavior for a dog, but it can become a problem if it is not controlled.

Certainly, you would not want your dog to keep looking for you whenever there is a thunderstorm or fireworks going around.

So what you would need to do is to find out what’s causing his stress and anxiety and work on eliminating these triggers.

Say if he gets nervous whenever there is a thunderstorm, you can get him a thundershirt to wear until the storm is over.

Or perhaps, if he is getting anxious because of unfamiliar faces in your home, you will need to introduce new people to him slowly and gradually.

Whatever the case may be, once you identify the source of his stress and anxiety, you can take appropriate action to help him overcome this situation.