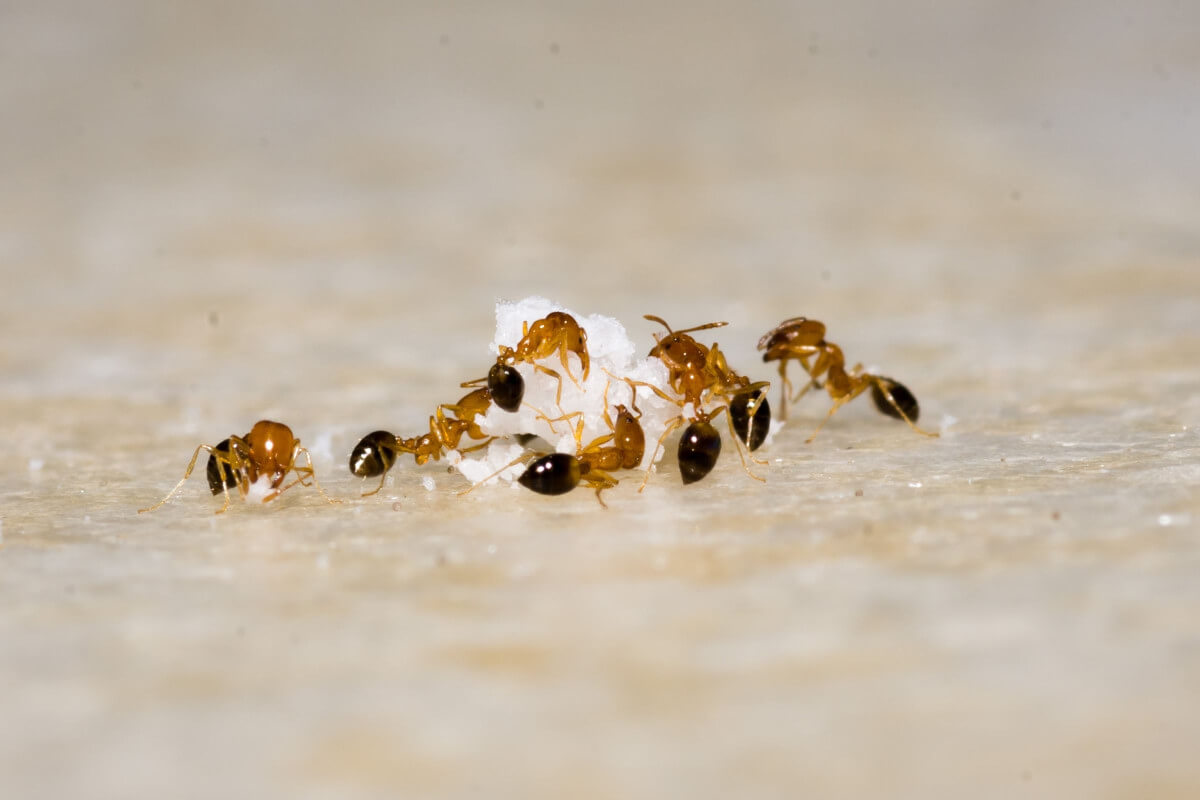 Would you consider ants to be a tasty dish? Probably not!

But your dog thinks otherwise. He sees ants as an enticing treat that is readily available right in front of him.

He will start eating these little critters left and right!

That is just one of the reasons why your dog eats ants.

Your dog is eating ants because he is suffering from diet deficiency, or he finds ants to be a form of tasty snack. He is curious about these little insects and licks them to investigate. He found ants in his food and just ate them. He could be doing it out of boredom.

When your dog eats ants, he could be suffering from some form of diet deficiency.

Does his diet contain all the nutrients that his body needs?

Is it a well balanced diet that keeps him from hunger?

If your dog is hungry at the time of this behavior, he may be having a hard time controlling himself and might just eat anything he can get his mouth on.

You see, ants are nutritious insects that can provide your dog with protein and calcium and when he eats them, he can get some extra nutrients.

So if your diet is not providing what your dog’s body needs, he will look for other ways to get what he wants.

This is when you will see him start eating grasses and insects such as bugs.

He will exhibit signs such as bad breath, dull coat, excessive fur loss, weight loss as well as bowed limbs when he is having diet deficiency.

If you see any of these signs in your dog, you will certainly need to make some changes to his diet.

It could also be the case of him suffering from intestinal parasites that are “robbing” the nutrients that his body is trying to get from the foods he eats.

In either case (diet deficiency or intestinal parasites), you should take him to see your veterinarian immediately to do a review and checkup.

If your dog is still a young puppy, he will be curious about the environment that he is in.

And when he sees small little insects such as ants moving on the ground, that is inevitably going to trigger his curiosity and make him carry out his investigation.

He is going to sniff and lick them in an attempt to find out more.

This is how he starts to get a taste of the ants and if he finds the taste to be enticing, you see him doing this again and again.

And since dogs possess predatory instincts, it is probably just his innate desire to prey on insects.

Tasty Treat For Him

Some dogs may be attracted to ants because they find them so delicious. The taste of ants is often unpleasant for humans, but not for dogs.

This makes ants an irresistible treat for your dog, and he will want to eat them again and again.

And since ants are often found in all households, this makes them an easy target for your dog at any time of the day.

He will start licking or chewing on them when he spots them.

Ants Are Getting In His Way

Your dog is not eating ants on purpose, but as they are getting in his way (“attacking” his food), he has no choice but to eat them along with his food.

So, to prevent attracting ants, always keep your dog’s food bowl in a pan of water and that should deter ants from reaching the food.

Always clean up any spills as soon as they happen to prevent the ants from spotting them.

Also, make sure you don’t have anything lying around that could attract ants.

You would never know what your dog will be doing when he is getting bored. He would do some wild things that you could ever think of.

This is when you will see him rolling over dead animals, eating his poop or even some insects that he can easily get hold of (such as ants).

So it is important that you keep your dog’s life as interesting and busy as possible.

There are a lot of ways to make sure that your dog gets a chance to release his pent-up energy and ease his boredom and make sure that he is having fun.

The first thing that you need to do is to make sure that he gets enough exercise.

Your dog should be able to run and play around freely in your garden or backyard.

This will help him to use up all his energy that he has built up during the day.

You can also play some games with him, such as fetch.

The way to play this game is to throw the ball as far as possible and make your dog go and get it.

When he is back with the ball, reward him with a good treat, such as a small piece of steak or cheese.

This interactive game can certainly help to build a bond with your dog and make him drain his energy.

You can also play tug-of-war with your dog. You will need to throw the rope and make him pull it.

When he starts pulling the rope, you must reward him with a treat. This game can help to strengthen his muscles and help him release his energy swiftly.

You should also take him for a walk at least once a day. This will give him time to relax and let off any remaining pent-up energy he had.

Can Dogs Get Sick From Eating Ants?

In general, ants provide some nutrients (proteins and vitamins) needed by canines, so they are in fact beneficial to your dog’s health when he ingests them.

It is unlikely that he will get sick from eating ants.

However, there is a risk that these ants will be all over his mouth and face as he tries to eat them, and they could potentially bite him causing painful pustules.

This is especially so for fire ants, which can release caustic alkaloids that cause a burning sensation when in contact with his skin.

What Do You Do If Your Dog Eats Ants?

If you find your dog eating ants for the above-mentioned reasons, try your best to eliminate these triggering factors, and it will be much easier to correct this behavior.

Address His Diet Deficiency: Work on improving his diet and creating a well-balanced meal for him.

Provide More Tasty Treat For Him: Train him to know that by not eating ants, he will be rewarded with a much more valuable treat (maybe some enticing meat treats for him).

Get The Ants Out Of His Sight: Make sure to keep his food bowl away from the reach of the ants. You can place the bowl in a pan of water.

Ease His Boredom: Keep him occupied with physical activities and mental simulation games.

Keep your home clean and tidy and clear the garbage bins regularly.

In addition, you should avoid leaving food trails on your floor for ants to follow.

This will prevent pests like ants from invading the house.

If you find a nest of ants in your house, you should get rid of them immediately.