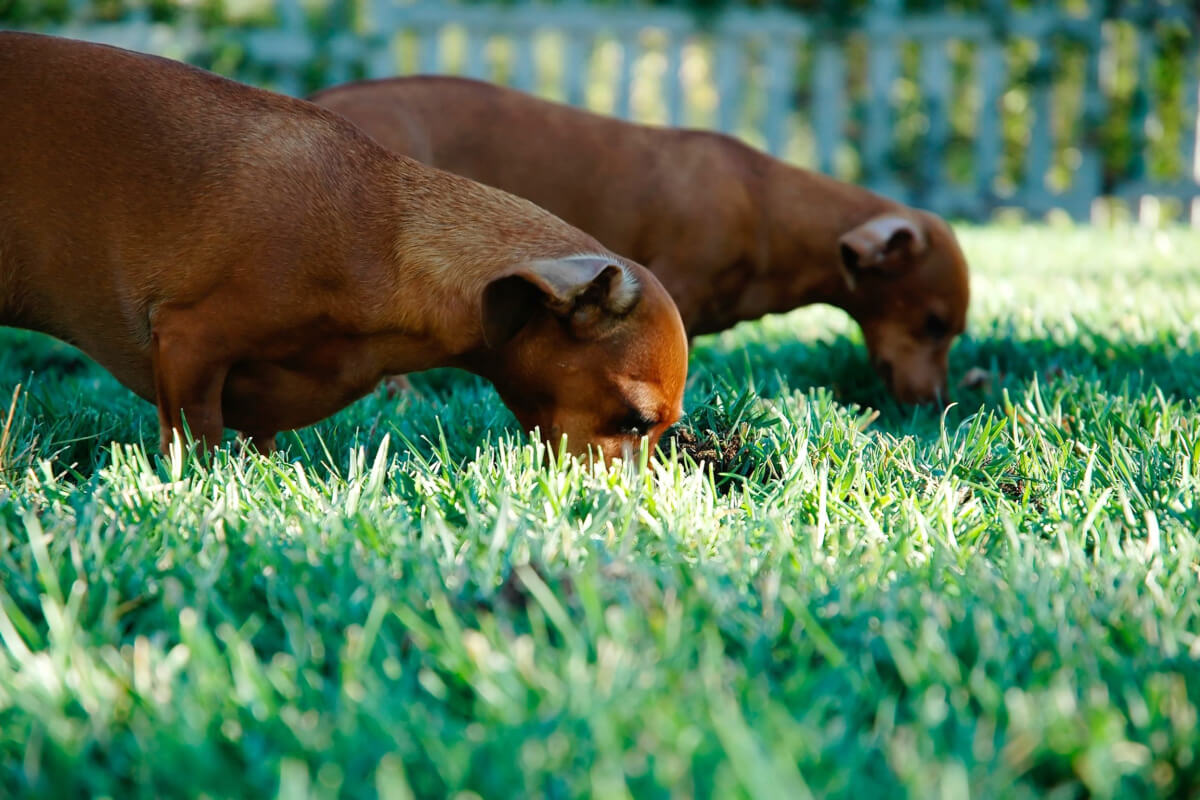 You have a shock when your dog comes looking for you with poop all over his mouth and you may be wondering why he eats his poop?

This behavior is often known as Coprophagia (A term used to describe dogs or puppies eating their own poop or other animal’s poop) and is certainly a disgusting behavior that NO dog owner can tolerate (imagine having that foul smell on his mouth, and he starts licking you all over!)

What can be done to stop your dog from eating poop?

The way to stop your dog from eating poop will be to address his behavior issues such as attention seeking, boredom and allelomimetic. Environmental and medical simulation as well as underfeeding could also cause him to eat his poop. Train him on the “Leave It” command to make him stay away from feces.

To work on getting your dog to stop eating his poop, you would need to know why he is doing this in the first place.

In fact, it’s quite normal for dogs to eat poop just that this behavior doesn’t really fit well in our society. Who in the human world likes the smell of poop! It is certainly going to be utterly disgusting for humans but totally natural for dogs.

Following are some WAYS to stop your dog from eating poop.

If you find your dog tends to eat his poop only when you are not with him or when he is feeling lonely, he could be doing this just to get your attention.

In this case, what you need to do is to spend more time with your dog to build up his confidence to be alone and get him some chewing toys to keep him occupied.

Your dog is feeling bored and tries to find some entertainment to kill his time. Eating grass or eating his own poop will be some activities that he can self entertain without your help.

What you can do is to plan for more playtime for your dog to keep him busy. Include both physical and mental games for your dog to help him release his excessive energy and keep his energy level low.

There is a saying that “A tired dog is a GOOD dog” and when you make your dog tired, he will not do any “monkey business”.

You could play with your dog some physical game such as Flirt pole, Tug Of War and Frisbee. These games can easily make your dog worn out after just 1 -2 session of play.

Also include some mental simulation games for your dog to keep him mentally tired. I would usually give my dog a KONG toy stuffed with some peanut butter for him to think of ways to get the treat out from the toy.

As your dog observes that you clean up his poop every time he does his pooping, he wants to help you out with this clearing.

And the way he does it will be….To eat up his poop!

What you can do is to act fast and don’t let your dog get the opportunity to see his poop. Clean up right away as his poop touches the ground.

This is the case where your dog learned the behavior when he was still a puppy from his mother and practiced that even as he goes to adulthood.

You see, the mother dog will eat the poop from her pup to keep the surrounding environment clean. She will often do this for the first 3 weeks and the young pup will pick up this poop eating habit from her mom and continue practicing this habit even when he grows up.

What you can do for this scenario is to make him unlearn this habit. The way to do this is through obedience training.

Whenever he attempts to put his mouth on the poop, give him the “Leave It” command to make him stay away from the feces.

A hungry dog will always look for other food supplies to fill up his stomach and the most reachable “food” will be his poop.

So make sure that you are feeding your dog with the right portion of food to make him feel full.

Remember, different breeds of dogs will need different amounts of food. If your dog belongs to a hunting breed which is typically more hyperactive, he would need more food.

Signs to look out on underfeeding will be weight loss, looking lethargic, uninterested in any play, hair losing its color and turning dull.

Also keep in mind not to overfeed him as it could make him not eating his meal regularly since he is no longer feeling hungry.

Separation anxiety, fear or stress are some common factors that could cause your dog to eat his poop.

Eating poop is a self calming mechanism for dogs as it helps them to release their stress and anxiety.

What you can do is to help your dog manage these emotional triggers.

If your dog is suffering from separation anxiety, spend more time with him to help him overcome his fear of being alone.

I would suggest that you allocate more playtime to interact with your dog such as getting him to play some interactive games with you (Tug Of War is a good one) and get him to sit beside you as you are watching TV or reading a book.

This will help to build up his trust in you and improve his confidence level.

You could also make your dog sleep in a crate and have the crate placed in your bedroom so that he can easily see you from his crate and this will ease his anxiety and stress.

Crate also offers additional benefits such as a personal secure place for your dog to take cover when he feels threatened or tired.

Dogs also don’t like to pee and poo at the place where he is sleeping so that will prevent him from eating his poop during the night when you are unable to keep a lookout on him.

Insufficient digestive enzymes will cause the kibbles that your dog is eating not properly processed and digested by his body.

This makes the poop to be full of kibble nutrients and that makes your dog want to eat his poop to “get back” the nutrients.

Kibbles are highly processed food and not easily digested by dogs with a “weak” stomach.

What you can do is to switch to some high quality food that is easily digested and absorbed by your dog.

If your dog only starts eating his poop when he is with your family for a while, it’s likely that he has picked up this habit during his stay.

Your dog might have seen other dogs doing it (eating feces) during his walk and curious to find out how the taste is going to be.

This makes him start eating his poop since it is going to be easily available.

And what’s going to happen next is that….once your dog starts eating his poop, he finds it tastes extremely nice (positive reinforcement) and he would eagerly want to do it over and over again. (An extra meal for him!)

So you would have to correct his behavior and the way to do it will be through obedience training and “Leave It” command.

Getting your dog trained on the “Leave It” command will certainly help you to stop your dog from making his move to eat any poop that he had found.

The way to train your dog on “Leave It” command will be:

1. Get your dog to remain in sit position.

2. Place a treat on the floor and quickly cover it up with your right hand.

3. Your dog will likely make his way to your hand trying to get the treat out from your hand.

4. Keep covering the treat with your hand and the moment your dog changes his attention from your hand to look at you, give him the “Leave It” command and offer him the treat from your left hand.

5. The goal of this training is to make your dog learn that when he follows the “Leave It” command and stays away from what he wants to get, something GOOD will happen.

In this case, he gives up his desire to sniff your hand and pay his attention to you and he gets a treat as a reward.

Once your dog is fully trained, you can easily get him to stay away from poop by giving him the “Leave It” command.

It’s important to keep in mind that you SHOULD only use a FIRM TONE when giving your dog this command. Avoid any shouting or yelling type of tone as that will only make your dog nervous and fearful.

You should also supervise your dog by having him on a leash when you are out for a walk with him to prevent him from getting his mouth on the stools around the streets.

Make use of some strong irritating spices that your dog finds to be unbearable and add them to his poop. This will deter him from finding his poop tasty.

Some popular deterrents such as lemon juice, bitter apple, Tabasco sauce or pepper flakes can be added to your dog feces to make the poop taste awful and that should discourage your dog from eating them.

Avoid Any Form Of Punishment

If you have scolded or punished your dog for any inappropriate pooping, he might have developed that fear of you and attempts to eat his poop so as not to leave any evidence for you to see.

So if your dog’s poop eating habit only starts after you have punished him from doing inappropriate pooping, this could be the trigger factor.

What you should do will be to STOP any yelling or scolding action and to keep a close watch on your dog. The moment he starts to poop, immediately clean up the stools so that he doesn’t get to eat them.