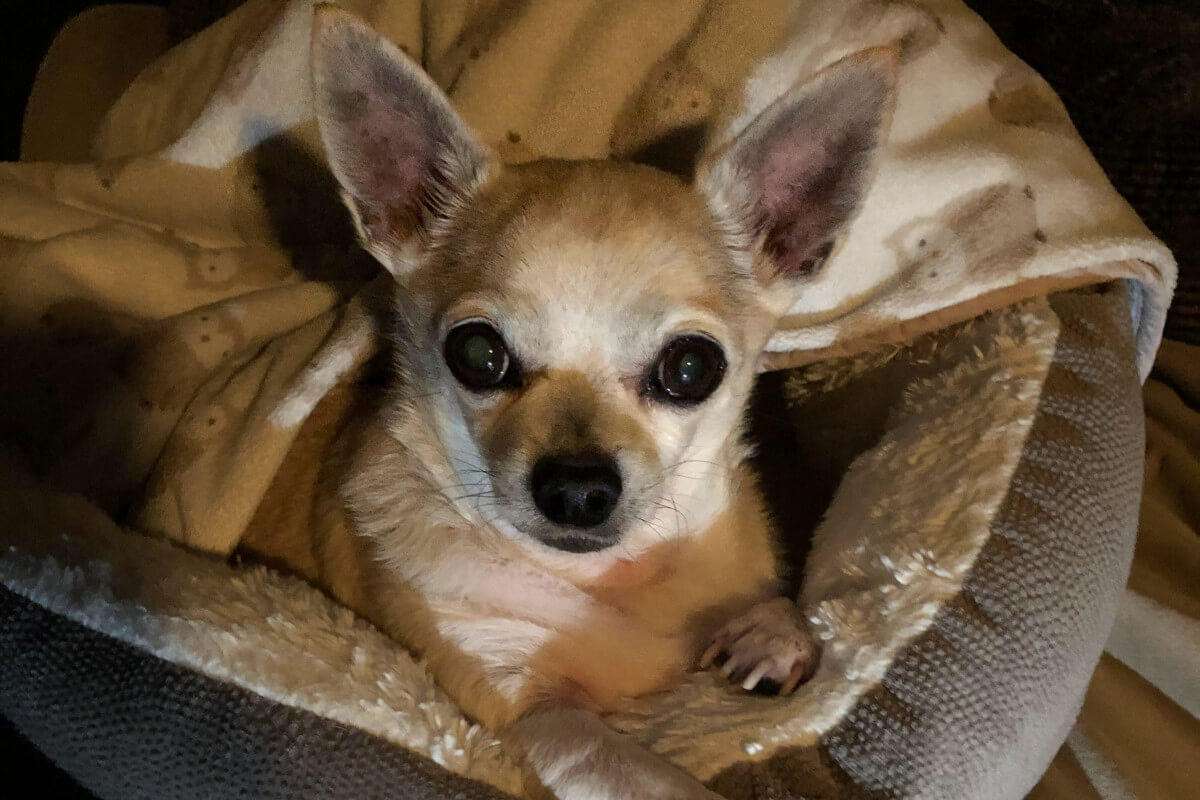 You are not alone if you have wondered why your Chihuahua burrows so often. There is a reason for that behavior.

But is that the only explanation for this behavior? Let’s find out more in this post.

As a Means of Keeping Himself Warm

A Chihuahua is a breed that is prone to hypothermia. That is why they often like to burrow under a cover because it keeps them warm.

So, it is not surprising if your Chihuahua prefers to curl up in the warmth of your bedding rather than the cold hardwood floors or tile.

As the weather becomes colder, this burrowing behavior becomes more prominent because the environment starts to get too cold for your dog.

Being a brachycephalic breed, Chihuahuas are more sensitive to low temperatures and due to their elongated soft palate, they have breathing problems and tend to lose heat much faster than other dogs.

Furthermore, without long, thick fur to keep them warm, they have a hard time regulating their body temperature.

With a high metabolic rate, they will also require extra calories to maintain their body temperature.

Thus, it is important to ensure that your dog has a way to stay warm inside the house as the weather gets chilly. You can get him a heating pad or a heated bed to help with this.

You also need to ensure that he has a warm and cozy shelter to keep him warm throughout the day.

Anxiety and Fear Are Brewing in His Mind

Chihuahuas are known to be very sensitive dogs and tend to be nervous around unfamiliar people or surroundings.

The sensitive nature of chihuahuas can cause them to become anxious and nervous if they are left on their own in an unfamiliar environment, and they tend to burrow when this happens.

It’s just a natural instinct for chihuahuas to stay safe during times of uncertainty.

You will find this burrowing behavior to be very common, especially during the first few days when your adopted Chihuahua is still trying to adapt to his new home.

If you notice that your Chihuahua is still showing the following signs of anxiety or depression after 2 weeks in your home, this is a good indication that he needs socialization training.

Symptoms of anxiety in dogs are as follows :

Socialization training will help to boost his confidence to react positively to new situations and to be calm when being alone.

A Noisy or Bright Sleeping Environment Disturbs Him

When your sleeping environment gets too bright or noisy, what will you do? Are you going to hide under a blanket to get a better sleep?

That’s what your Chihuahua is doing when his sleeping environment is too bright or noisy. He is trying to dim and quiet his surroundings.

If your dog is sleeping in a crate, it is easy to create a dark sleeping space by covering the top of his crate with a blanket.

Alternatively, you can move him into a room that is far from a light source and from noise.

Having a TV in your dog’s sleeping area is definitely not a good idea since your family will be watching TV in that room while your dog sleeps.

You might want to consider placing him in your bedroom. This is because he will be able to smell your scent in the room, which will help him feel calm, relaxed, and sleep better.

Keeping your Chihuahua in a quiet and dimly lit area while he is sleeping will benefit him.

Marking His Territory with His Scent

The behavior of your chihuahua burrowing might be a way for him to mark his territory. By sleeping under the covers, he is trying to smear his scent on the bedding to make the other dog aware that he has been here and to claim ownership of it.

This territorial marking behavior often happens when you have adopted another new dog in the household and your Chihuahua may have felt that his territory was being threatened.

He feels that there is a need for him to protect his property. By leaving his scent over his property, he is telling the new dog that this is his area and he should not mess around here.

This can be a very stressful situation for your Chihuahua and you should work on addressing his possessive behavior.

You will also find him turning aggressive to other dogs if he feels they are trespassing on his territory or taking your love away from him.

If your dog has been brought up in a house where he was the only dog, he might not be used to having other dogs around, and will try to get them out of the way. This can lead to him getting aggressive or even attacking the other dog.

This is often due to poor socialization, and you should start him on this form of training.

He Is Hiding from You

This can be the case that your Chihuahua is not feeling well, and he is trying to keep himself away from you. By sleeping under the covers, he hopes that you will not be able to find him, and he can get a good sleep.

This often happens to a senior dog (more than 10 years old) where he is suffering from some joint discomfort and does not want you to touch or pet him.

If you recently had the habit of stroking your dog when he is asleep, that could explain why he is “covering” himself. He is in fact telling you, “Please leave me alone and keep your hands off me!”

He Is Playing “Hide and Seek” Game with You (Being Playful)

Your dog is actually not ready to get his sleep and by burrowing himself under the cover, he is in fact playing a hide and seek game with you.

He is hoping that you will find him missing and start searching for him. This is often the case when your dog has too much pent-up energy in his body and he is still not ready for his night sleep.

And if he finds that you are not taking the initiative to find him after a while, he will reappear in front of you, get your attention and hide again.

What you should do is to ensure that your dog gets an outlet to release his excessive energy during the day so that he will feel tired and ready for his sleep at night.

Engaging in physical activities such as fetch, tug of war, and playing with a flirt pole will allow your dog to release his excess energy and feel exhausted at the end of the day.

You Have a Pregnant Chihuahua

Burrowing behavior in a female Chihuahua may be a sign that she is planning to build a nest for her new litter.

During pregnancy, your female Chihuahua will feel the need to have a nest for her litter. When this happens, it’s normal for her to show signs of nesting behavior, such as digging, hiding, and burrowing.

She may dig holes in the backyard (to prepare a nest), hide in the corner of the room, or under furniture and burrow in a blanket during her sleep to keep herself and her pups safe.

You can tell if your female Chihuahua is pregnant by examining her belly. She will likely be noticeably larger than normal, and will exhibit other signs of pregnancy, such as an enlarged vulva and nipples.