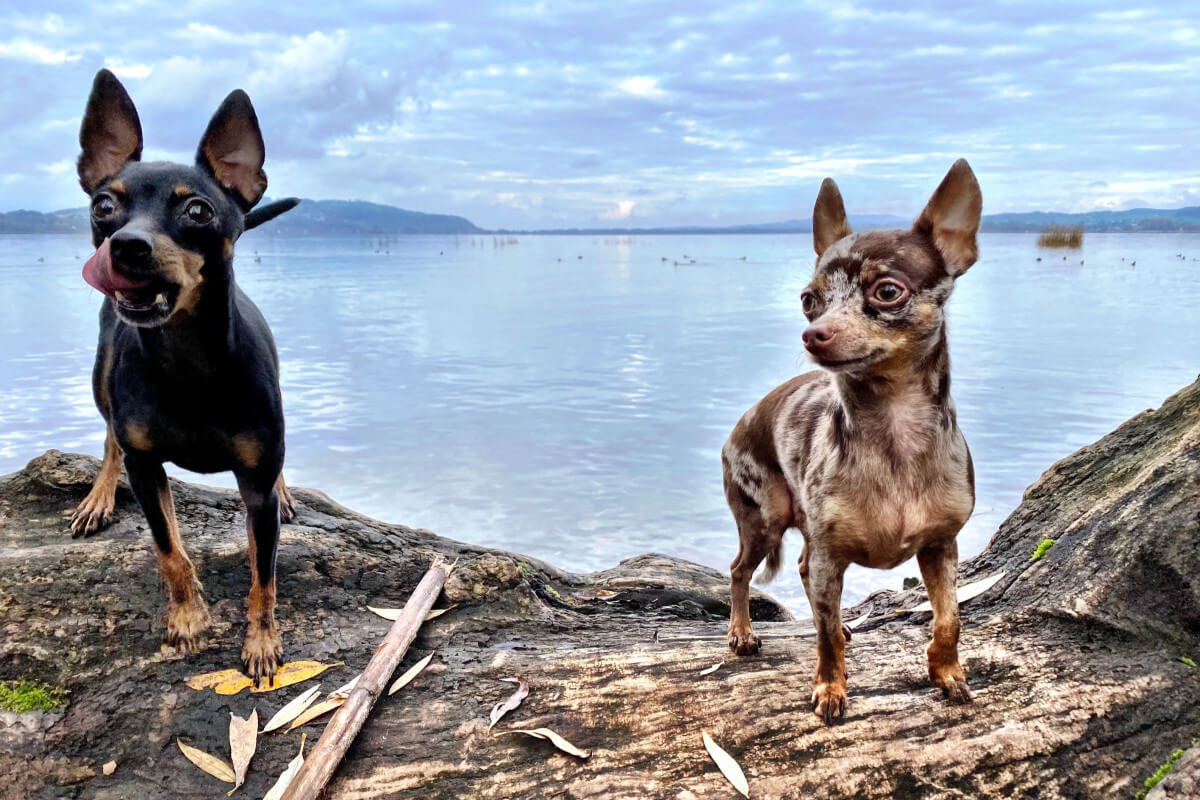 Being naturally aggressive and territorial, Chihuahuas have the tendency to be snappy if they aren’t trained to socialize. Thus, you need to socialize them from a young age in order to get them used to the presence of humans and other animals.

Having said that, there are certain dogs, particularly the toy breeds, that seem to get along very well with Chihuahua, probably because they’re not as much of a threat to their space.

Can Chihuahuas Live Together

Chihuahuas can bond well with one another. It’s not at all uncommon for a household to have more than one Chihuahua.

Leaving them alone while you’re away shouldn’t be a problem. Two Chihuahuas are likely to make eye contact and make a bow to one another when they first meet.

Once they have gotten to know each other, they will become more relaxed and follow each other’s lead closely. When it comes to toys and food, they will also share them freely.

Toy Breeds That Get Along With Chihuahua

Many people don’t realize that Chihuahuas and Yorkies can be a great match.

Both are energetic, happy dogs that enjoy getting outside and exploring new environments. They also like playing and are friendly towards children.

A Chihuahua and a Yorkie will get along quite well. Both dogs are small and affectionate and will make a great companion. They love to play together, so it’s a match made in heaven!

In general, they are very social animals and are eager to interact with people. The two dogs love to play and have no problem getting along.

They make good playmates because of their desire to play games and energetic nature. These highly intelligent dogs are friendly with children in the home as well.

Toy Breeds That Don’t Get Along With Chihuahua

The first thing you need to know is that both dogs have similar personalities.

They are both known for being intelligent, adventurous, active, independent, and courageous. They also have a reputation for being stubborn and domineering as well.

This means that they will want to rule over each other.

When the two meet, you will most likely see them snarling at each other. They are trying to make the other party to be submissive.

Since both dogs are dominant, they will not be interested in playing or working together. They will rather fight and dominate each other.

The Shih Tzu has a similar personality to Chihuahuas, possessing a proud and arrogant attitude, and that arrogance makes it difficult for them to get along well with each other.

Pitbulls can be very protective and have a tendency to be aggressive towards smaller dogs.

If you have a Pitbull, be sure to take proper precautions, as it can be dangerous to have a smaller dog such as a Chihuahua around them.

These two dogs are not compatible because Chihuahuas can be possessive and aggressive at times (despite their smaller physique) and this can lead to a fight between them.

And as you can guess, who will be the winner in a fight.

Do Chihuahuas Get Along Well with Larger Breeds of Dogs?

In spite of their small size, Chihuahuas tend to be bossy due to their superiority complex.

They generally do not like being around giant dogs. Nevertheless, there are some exceptions. The relationship can be in harmony if the larger dog allows the Chihuahua to be the Alpha or if they had been trained and disciplined to be submissive.

Large Dog Breeds That Get Along With Chihuahua

It is well known that Golden Retrievers are generally easy-going dogs with a calm attitude.

Their bonding with Chihuahuas, however, is rather average. There won’t be a lot of miracles in their chemistry, but they’re independent enough not to cause a big fuss.

Generally speaking, this is a neutral combination. The atmosphere in their presence will be calm, but don’t expect them to be best friends.

The two breeds will keep to themselves without causing a hindrance or grabbing the attention of each other.

Large Dog Breeds That Don’t Get Along With Chihuahua

This pair should be strictly avoided. Chihuahuas and German Shepherds typically don’t get along.

The size, vitality, and wit of the German Shepherds will irritate and intimidate Chihuahuas to unimaginable levels.

German Shepherds are known for their powerful jaws and intimidating personalities and can be very aggressive toward other dogs.

As both breeds have similar personalities which are dominant and aggressive, it will be hard for them to get along well.

Both breeds have similar personalities and temperaments and only differ in size.

Shiba Inu has the attitude of “Never give up or surrender”. In the face of a challenge, he will often fight back. Because of this, they are difficult to get along with Chihuahuas, who are also dominant and aggressive.

Hence, the relationship between a Shiba Inu and a Chihuahua is not a pleasant one. Shiba Inus are much bigger than Chihuahuas, and they tend to bully them.

How to Help Your Chihuahua Get Along with Other Dogs

Chihuahuas, by nature, prefer to be the Alpha dog of the household. In general, they do not like to live with other pets such as dogs and cats. It is not their main need to have a companion. That said, it is not a final judgment.

The bonding process can be made more favorable when proper socialization training is started from an early age and frequent socialization is conducted.

Though Chihuahuas are very intelligent dogs, if they have never had any socialization, it can be difficult for them to be comfortable around strangers and other pets.

As a result of being afraid, or not having been properly socialized, Chihuahuas can be aggressive and may spring an attack on whatever that they perceive as a threat.

Therefore, consider starting your Chihuahua on socialization and obedience training if you have not done so.

It is important to use positive reinforcement to help your dog have good associations with dogs he meets and greets so that he feels comfortable approaching them.

Walking your dog daily in a dog park is the best way to socialize him. In a park, you can introduce him to other dogs and let him play with them. Be sure to do this safely, of course.

You can also introduce your Chihuahua to cats, since cats are usually more tolerant of dogs.