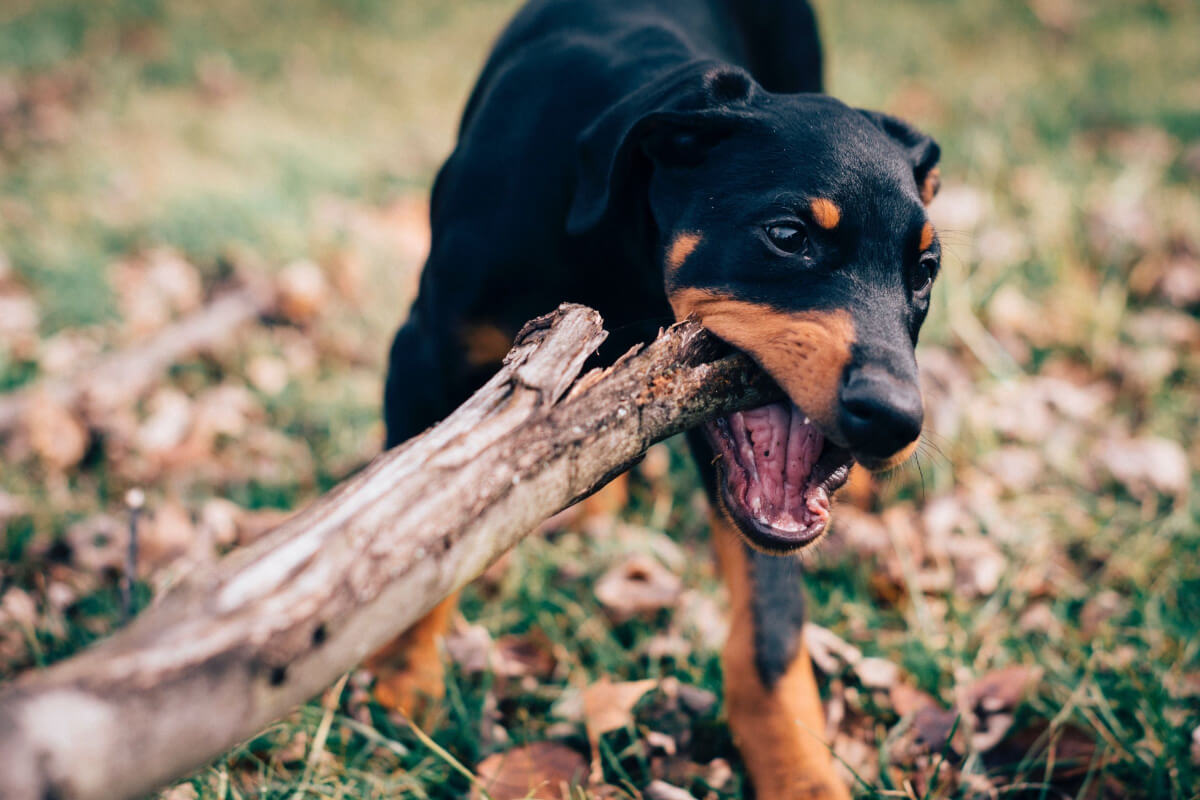 If your dog ever attacks (bites, scratches or mauls) another dog, he is at risk of being put down if that causes any FATAL injuries to the other dog.

Fortunately, there are ways you can help to ensure this terrible situation does not occur in the first place.

In fact, you should do everything within your means to prevent it and the very first step toward prevention is through obedience training.

So let’s begin our training by looking at exactly what happens when two dogs (even friendly dogs) get into a fight, and how you, as a responsible owner, can take steps to stop it.

A dog might attack another dog when he is excited or worked up. You should never reprimand your dog and keep calm to divert his attention. Train him to be comfortable around other dogs through conditional training and socialization. Correct his resource guarding behavior if he is acting as the result of this.

What Causes A Fight Between Two Dogs?

As said earlier, your dog might start a fight when he is either provoked or when he decides on his own to attack someone or something that he feels is of threat to him.

Any sort of fight is a very serious issue for all concerned and the results can be fatal for both dogs. A fight usually starts with one of the dogs becoming excited or “worked up.”

He Is Getting Excited

Dogs, like all animals, have a fight response when they become aroused. This response is hard-wired into their brains and can happen automatically.

When this response is triggered in a dog, he will often engage in what’s called “predator behavior”.

This means that he will act much like a wild animal, defending his turf or territory and trying to harm or drive away whatever he perceived as a threat.

In the case of two dogs that are just meeting for the first time, the one who is more aroused will instinctively perceive the other dog as a threat and will mount a “defense” against him.

This often happens when one or both of the dogs detect a scented “suspect” nearby. Or perhaps one of the dogs smells the scent of another dog (or person) he perceives as a threat.

The “excitement” your dog gets from a scent is similar to what a human would get from the smell of an attractive woman.

When he gets excited, his body begins producing increased levels of a natural chemical called “cortisol”. This chemical makes his blood more “thick” and pushes “red” blood cells throughout his body.

These cells give him more energy and make him stronger, but they also make him much more likely to attack on whatever that excites him in the first place.

The most important thing you can do is never let your dog get aroused in the first place.

You can do this through making sure that he had an outlet (exercise) to release his pent-up energy daily and that will help him to stay at low energy mode.

In case your dog is exhibiting sign of attempting his attack, what you should do is to calmly walked up to him, use your dominant hand to put a tight grip on his muzzle or between his shoulder blades and gently guide him away from the other dog.

He Is “Worked Up”

Another way your dog can get “worked up” is when he is tired. Yes, you hear it correctly!

But wait, I thought there is a phrase “A tired dog is a GOOD dog”.

This is true in a way if there are NO stimuli that are going to make a dog feel he is at risk.

You see, tired dogs are more likely to become aggressive because their bodies have a difficult time processing the complex information coming from their brains.

An even more significant cause of your dog getting “worked up” is when he feels threatened.

In other words, if a dog approaches your dog while he is tied up outside or if you leave him alone in an unfamiliar place with another dog or if another dog starts chasing him or if you put him in a situation where he is “stuck” with no escape route then his cortisol levels will skyrocket.

He will become extremely agitated and initiate the attack as his way to protect himself.

There are many other things that you can do to help your dog be less likely to get into a situation where he becomes excited or agitated.

You see, there will be a lot of bad reactions from your dog when he is excited or agitated.  He will bite, scratch, and even attack without thinking. So, don’t give in to that.

Instead, just stay calm and everything will work out fine. Another thing you can try if Fido begins to act up is to distract him with his favorite food.

Don’t ever hit your dog or use physical force on him when he is in an aggressive state. That will only make the situation worse.

Instead, as soon as you notice he is beginning to get excited or agitated, the best thing to do is get him away from the situation or simply tell him “No” in a firm but nice way and give him something to divert his attention.

As far as possible, never put your dog into a situation where he feels trapped or where he has no way to escape.

That’s why it’s a bad idea to leave him alone in an enclosed area with an unfamiliar dog, especially if the other dog is of an aggressive breed.

If your dog is already very stressed out, the last thing you want to do is to add to that stress.

But often, even well-intentioned owners make this mistake. For example, many people believe that if they scold their dog when he starts to act aggressively, that aggressive behavior will stop.

In fact, that only makes it worse. You see, when your dog experiences a dramatic increase in his cortisol levels and an increase in his “fight-or-flight” adrenaline level, that combination of heightened stress causes him to become even more agitated and more likely to engage in whatever behavior you were trying to correct!

In other words, not only did your scolding fail to work, you actually made things worse! So don’t try to “correct” your dog’s unwanted behavior by getting angry with him.

Keep Calm And Divert His Attention

Instead, try the following approach.

“The best tool for the job is a CALM, non-threatening voice along with an irresistible distraction, which is usually an enticing treat!”

You know, a really smart dog will figure out how to “read” his owner’s body language and if you’re tense up and anxious, your dog will become tense and more anxious.

Also, by offering your dog treats (as distraction), this will cause him to eat something (which will take his mind off his own over-stimulated state) and will also temporarily lower his cortisol and adrenaline levels.

You can use this approach whenever your dog is overly excited or anytime you need him to calm down.

One thing I don’t recommend is using a short tight leash or “chain” to control your dog’s movements. That just teaches your dog to become extremely agitated whenever he feels trapped, and it makes it much more difficult for you to calm him down.

Instead, use a loose lead, so your dog can roam where he wants but stay close enough and will come to you when you call him.

Resource guarding is very common in most dogs. He may be guarding his food dish, his toy, his owner or his territory.

If your dog is having resource guarding behavior, he may look upon another dog as trying to “snatch” you away from him or invade his territory.

A resource guarding dog is certainly not a bad dog. He is doing what he should be doing, which is protecting his resources from theft.

His first instinct is to defend his resources when faced with a competitor.

So how should you deal with this behavior?

Ignore your dog whenever he is exhibiting this type of behavior. Don’t talk to him, look at him or even think about him when he is doing this.

This is very important. By ignoring him, you are sending a strong message to your dog that what he is doing is undesirable and doesn’t earn your attention. In time, his guard will drop, and he will stop doing this.

For one thing, you need to understand why it is happening. You need to find a way to give your dog a reason to let go of his guarding and this can be done through socialization training.

Train Him to be Comfortable Around Other Dogs

Start him on socialization training as soon as you can.

If your dog is interacting with friendly dogs from a young age, this will make him feel more comfortable with other dogs.

Introduce him to another dog or puppy in a controlled environment and let him get used to having other dogs around.

Your dog should have regular exercise. Running on the beach is great for you and your dog. Make sure your dog gets enough exercise to be physically and mentally healthy.

Even if your dog doesn’t like the first dog he sees, he’ll learn to accept other dogs in his life as he progresses with the socialization training.

You condition a dog by consistently giving him a desired response (a praise, a reward or a gentle pat on his shoulder) whenever he performs a desirable behavior. Sounds easy enough, doesn’t it?

In truth though, it’s much more difficult than it sounds.

You see, your dog needs to get these positive reinforcement at least ten times every day for several weeks before he’ll start to understand that what he just did was good.

There are two important things to remember:

1. Conditioning is most effective when it is consistent.

As I said earlier, you condition your dog by consistently giving him a desired response whenever he performs a desirable behavior.

That means you praise him every time he sits, stays, comes when called, walks politely on a leash, shakes hands when asked and not reacting aggressively when facing other dogs etc.

But if you don’t consistently reinforce what your dog has just learned, he may forget it completely.

Or worse yet, he may decide he no longer likes what he is doing and decide to stop doing it because he doesn’t get any positive reinforcement for doing that.

Don’t let that happen to your dog. Make sure his learning experience is a positive one through CONSISTENT positive reinforcement.

(Watch Out) Signs Your Dog is About to Attack

Most often, your dog will not attack until he feels cornered or being attacked. Therefore, the first indication you will have of an impending attack is when he starts to growl or snarl.

If you see this, stop what you are doing, turn and walk with your dog in another direction as fast as you can.

Don’t look back. Just keep walking in another direction until you are out of the other dog’s sight. This will give your dog a chance to calm down. Once he has cooled off, comfort him and pet him gently.

Don’t rub his head or muzzle. That will only encourage him to become more aggressive.

Stay calm, comforting and be non-threatening. Praise him for being brave and telling him he did the right thing. He’ll feel much better about himself and won’t try to prove himself by attacking again.