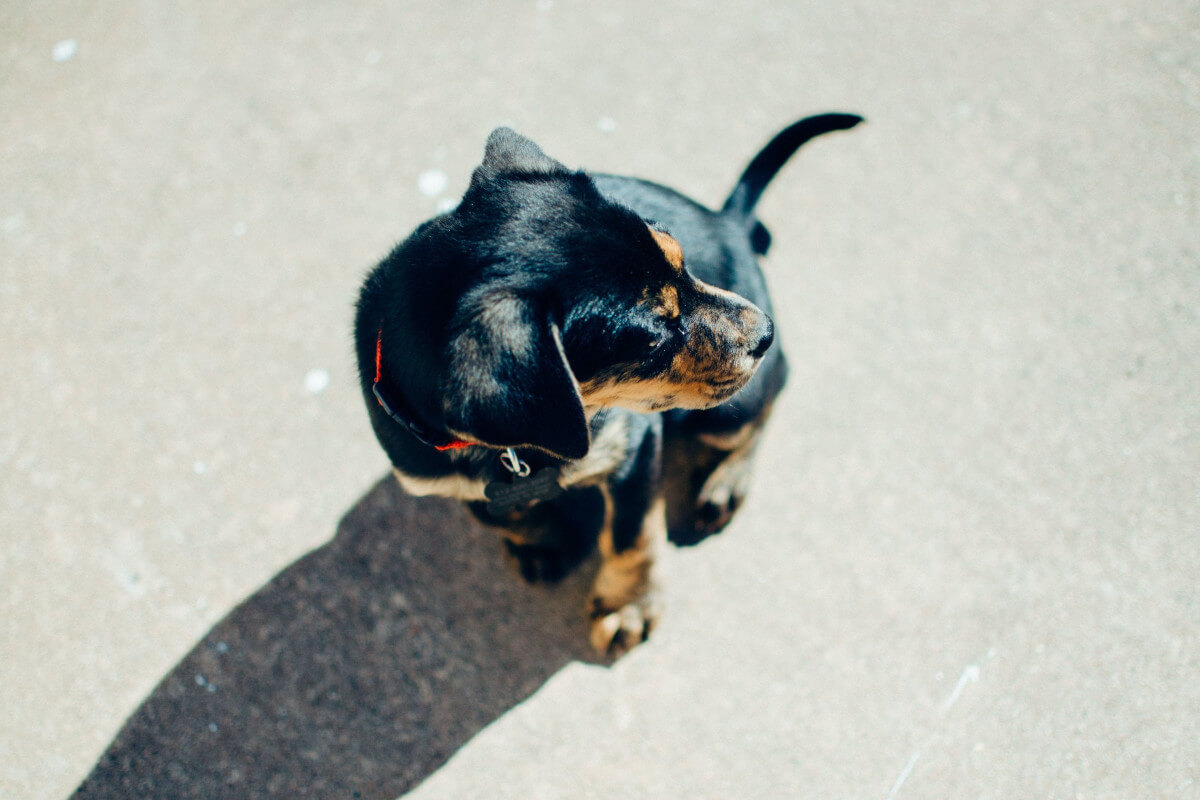 If you are wondering why your dog is scared of shadows, you should know that it is not the shadow itself that he is afraid of, but the fact that it represents a form of movement or “life”.

When a shadow passes by him rapidly, he will think that something is moving toward him even though there is nothing.

This will cause him to become extremely nervous and alert, thus explaining his fear of shadows.

If you pay attention to your dog when he is frightened, you will see that he is trying to find the “source” of the movement to determine what is making the shadow move.

Your dog is scared of shadows because they can appear out of nowhere, grow and shrink in size swiftly and diminish in a flash before he is able to catch them. He could have past (shadow) traumas that made him uneasy. Dementia could also affect his ability to know that shadows are “harmless”.

It Is Appearing Out Of Nowhere

Your dog is feeling fearful as the shadow seems to appear out of nowhere, and it doesn’t come with any scent?

This can be very troubling for him as he doesn’t understand what is going on.

What you should do is to make him know that the shadow is not at all frightening and could be an exciting happening for him!

You can slowly “introduce” shadow to him, starting with a stationary shadow before adding moving shadows.

This could be as simple as holding a piece of paper in front of a light source so that he will see a stationary shadow right in front of him that doesn’t cause him any harm.

Slowly work your way up until he is comfortable with these stationary shadows.

Use various different objects to cast shadows. This will let your dog know that shadows can come in numerous shapes and sizes.

As he starts to get comfortable with the stationary shadows, you can increase the challenge and present moving shadows to him.

For example, you can have him watch a shadow puppet show where the shadow figures are controlled by you.

Or, you can create a shadow “race.” Flash a flashlight on your hand to cast a shadow on the wall and move your hands around to create an illusion of “your hand” moving on the wall.

Do this training in an environment that he is familiar with as that would help to ease his anxiety.

You can make use of a snoot loop to guide your dog to face in the direction where you stimulate the shadow during the training session.

If he starts to show signs of stress or nervousness during the training, simply stop what you are doing and reassure him that everything is fine.

The reassurance can be in the form of petting, verbal praise and treats.

It Can Grow And Shrink In Size Swiftly

This is probably what’s striking your dog’s fears.

As you can see, it only takes a few seconds for a shadow to grow and shrink as the “object” that casts the shadow moves.

Your dog will see the shadow growing and shrinking in size rapidly and associate that with the thing that scares him.

Since he is unable to catch the shadow that is stirring his fear, he gets nervous whenever he sees it.

Also, because the shadow is moving around, your dog doesn’t know where it’s going to appear next.

This makes the situation even more unpredictable and scary for him.

That’s why I recommend using desensitization and counter conditioning techniques to make your dog associate something safe with the thing (shadow) that scares him.

This can be done by exposing him to the thing (shadow) that scares him in controlled settings so that he will feel safe.

Once he feels safe, you can slowly increase the amount of time he spends on the object that scares him and, eventually, he will get used to it.

Here are the steps to help your dog overcome his shadow phobia:

1. Start With a Small Challenge.

Your first step is to go for a stationary shadow for your dog to overcome.

Go for something that he is comfortable with, such as casting a shadow of his favorite toy on the wall.

Keep the stimulation session under 1 minute to prevent your dog from feeling over stressed.

Remember to reward his good behavior with treats and praise.

This will help him to associate seeing shadows with a pleasant experience.

2. Gradually Increase The Time Your Dog Is Exposed To His Fear.

As your dog reacts well to the stationary shadow, you can gradually increase his exposure duration.

Remember to condition your dog by rewarding him when he remains calm during each exposure.

Then, gradually increase the duration of the exposures with more repetitions.

Once your dog is reacting well, you can increase the challenge by introducing a “moving” shadow to him.

As you cast the shadow of the toy using a torchlight, slowly move the light and toy to simulate a moving shadow.

Also, add some variability by simulating the shadows in different rooms.

Keep repeating this training till your dog is comfortable with 10 minutes of moving shadow time.

Keep in mind that every time he is exposed to his fear, he needs to be rewarded for facing it calmly.

It Can Vanish Instantly

Just as a shadow can appear almost out of nowhere, it can also diminish in a flash.

You know that as long as there is no lighting, the shadow will be gone, but your dog wouldn’t know that “principle”.

He will see that (shadow) as a mysterious thing that can appear and disappear (at will).

That mystery would stir fear in him as he knows that there is no way that he could catch it, and he is wary that it would appear again and attack him.

So what you need to do is to remove this mystery and show your dog that shadows are just light, and this will ease his fear.

And when he sees that the light makes the shadow appear again, he will not be anxious.

Past (Shadow) Traumas Trouble Him

Your dog could have his phobia of shadows as the result of his unpleasant experience.

For example, he could have been chased by another dog and as he is trying to run away from the dog, he sees the shadow of that dog casting on the ground.

This makes him grow his fear of the shadows.

And that could explain why he will start to bark and growl at your shadow when you are walking alongside him on a sunny day.

Even though there is no danger, your dog associates the sight of shadows with something bad that will happen to him.

He will continue to react in a fearful manner as long as he remembers the unpleasant event.

So, if you want to help your dog overcome his phobia, you need to help him overcome his unpleasant experience.

You will need to condition your dog to face his fear.

In other words, you need to GRADUALLY expose your dog to his fear so that he feels less afraid of it.

Dementia Makes Him Fearful Of Shadows

When your dog turns into his senior years, he might start to show signs of health related disorders such as disorientation that affects his ability to understand what is happening around him.

For example, things such as the shadow that appears in front of him, which he perceives as a normal happening before he suffers from dementia, might start to make him fearful and anxious.

One of the ways to reduce his anxiety and stress is by having him in a crate.

This will minimize the chances that he sees shadows in the home (such as the shadow of window frames on the wall due to sunlight casting).

Make the crate his beloved personal place to be in whenever he is feeling scared or anxious.

Leave his favorite toys, water and food in his crate and add a warm blanket to make the crate a cozy place to be in.

You can also get him a pair of tinted dog goggles to help reduce his visibility of the shadow when he is out of his crate.

You should bring your dog to a vet for a health check-up every 6 months when he is 10 years old.

This way, you can catch any health issues early and give your dog the best care possible.