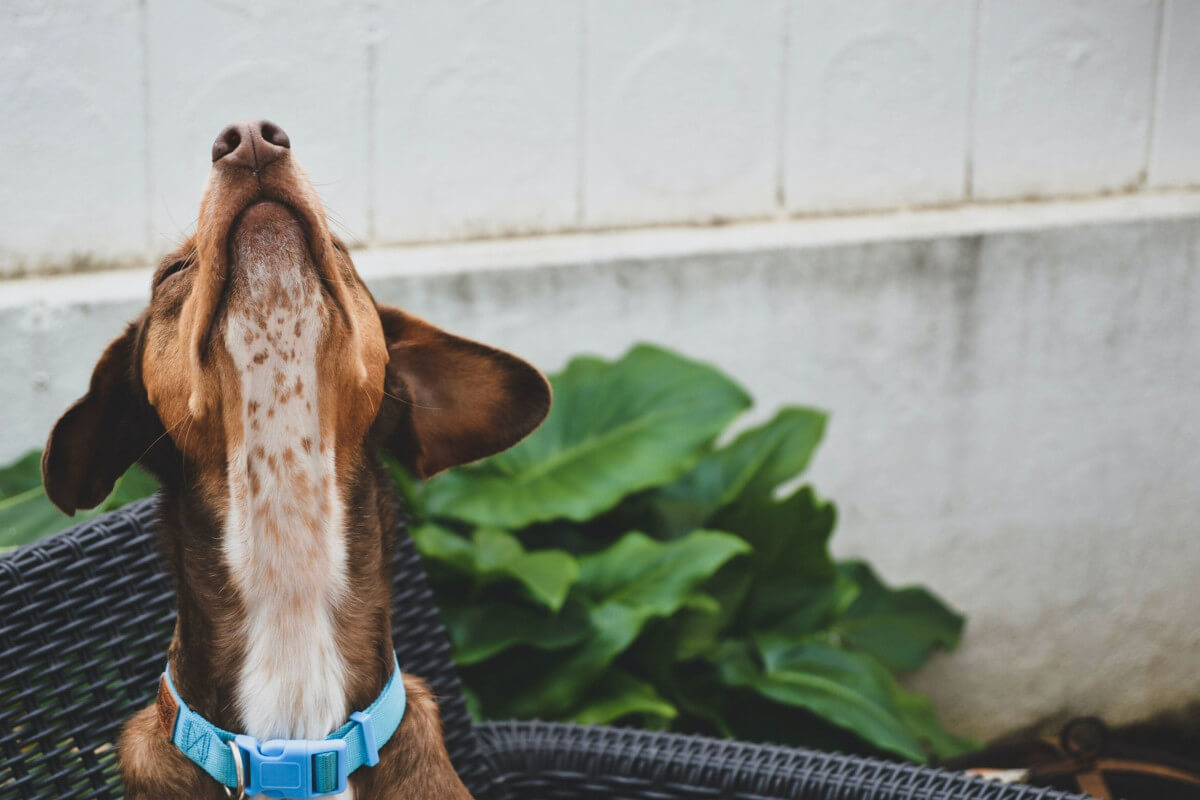 Dogs have a very keen sense of smell and are able to detect odors that humans cannot. So do not be surprised if you see your dog sniffing the air and looking up, but you couldn’t find anything special in the air.

Your dog could have smelled something that catches his attention, and he wants to do his investigation.

In cases where he can’t pinpoint where a scent is coming from, he will stick his nose in the air and sniffs until he gets a grasp of it.

However, is that the only possible explanation for this act? Keep reading to find out more.

There’s a smell in the air that piques your dog’s interest. This odor is unfamiliar or frightening to him, and he wants to find out more about it. Because of your positive reinforcement, he finds this behavior rewarding. He lifts his head to enjoy the fresh scent of the wind. Dementia is affecting his thinking, and he is sniffing the air for no apparent reason.

There’s a Smell in the Air That Triggers His Curiosity

It is through their noses that dogs “see” the world. In contrast to humans, which have only 5 million olfactory receptor cells, dogs have over 300 million!

With an amazing number of olfactory receptor cells in their noses, dogs find it nearly impossible to ignore all of these intriguing smells that surround them.

The fact that you cannot smell what your dog smells does not mean it is not there.

If your dog is continually smelling the air, there’s a good chance he’s just getting a whiff of something he likes or is interested in.

He can easily smell the scent of humans, cats, dogs, trees, flowers as well as the smell of bread from a bakery across a few streets while walking in the street.

Perhaps he noticed the scent of perfume on a lady that was walking past another street which he is familiar with, or he sensed the oncoming smell of rain in the air.

Nervousness Is Evident in This Act

This may be a sign of anxiety. Your dog’s nose may have detected an odor or something unfamiliar or frightening, and he is sniffing the air to get more information.

Possibly, your dog is smelling something that triggers fear or anxiety in him. The scent could be from his predators, such as snakes, hawks, groundhogs, skunks, and porcupines hidden somewhere in a park where he is walking past.

It could also be the scent (perfume and cologne) from a person walking nearby that brings back his unpleasant experience. He could have associated that scent with ill-treatment from his previous owners.

He could also sense the coming of thunderstorms. Usually, before a rainstorm, an “earthy” smell commonly referred to as petrichor will linger in the air and that can easily be picked up by your dog.

As dogs are mostly afraid of thunderstorms, loud noises and getting wet, that triggers their fear.

Keep an eye out for signs of anxiety in your dog, such as the pulling back of his ears with a low posture and a tucked tail, pacing, whining, barking, cowering, restlessness, and seeking cover.

He Finds This to Be a Rewarding Behavior

If you have the habit of leaving your food on your table, that could explain why your dog keeps sniffing the air and looking up.

He is craving your food on the table as the scent of the food is irresistible to him. And if you have the habit of offering some of your food (which you shouldn’t be doing) to him whenever he looks up to you with his lovely eyes, that could further encourage him for this behavior.

He will associate this act with a rewarding experience and will love repeating it whenever he smells the scent of the foods lingering in the air.

He knows that you will reward him with your food when he goes near you and looks at you with his big and lovely eyes!

In Search of Anything to Keep Him Engaged (Boredom)

Dogs will exhibit some strange behaviors whenever they are feeling bored and there are no outlets for them to release their pent-up energy in their body.

This can be observed in your dog’s body language, such as excessive licking of his paws, barking, digging in the yard, chewing on furniture, being restless, mugging you to get your attention, sniffing the air for anything to keep him busy.

This behavior is more prominent in active dog breeds such as Poodles, Labrador Retrievers, German Shepherds and Border Collies, where they have a high need for physical and mental stimulation to keep their energy in check.

Therefore, if your dog belongs to one of these active breeds, you will need to plan for adequate exercises daily to help him burn off his excess energy.

To prevent your dog from overexerting himself, you must plan for the right intensity level and duration of exercise based on the breed, size, age, and health status of your dog.

For many dogs, 30 minutes to two hours of daily exercise is sufficient, although some working dog breeds may need more than 2 hours of workout daily.

Your dog’s daily routine should also include walking (at least 1-2 walks per day) to keep him physically and mentally healthy.

A brisk walk will provide him with an opportunity to burn off his extra energy, whereas a slow, leisurely walk will improve his mental health as he can explore and sniff as long as he wants.

As you probably know, the nose is one of the most sensitive parts of your dog’s body. It can detect smells and temperature changes.

So, when your dog is out for a walk on a windy day, he will enjoy the feeling of the wind on his snout.

He will often lift his head to take in the fresh scent of air and will also raise his head to follow the wind’s direction.

It is for this reason that your dog sniffs the air and looks up at the sky when he is in an open space.

He Is Acting This Way Due to Canine Cognitive Dysfunction

Canine cognitive dysfunction (CCD) is a form of mental deterioration that affects the brain and causes a dog to exhibit changes in his behavior and emotions.

Although there are some cases of it occurring in young adult dogs, this condition mostly happens in older dogs that are more than 10 years old.

The symptoms that dog with CCD exhibit are very similar to humans with Alzheimer’s disease such as:

Since it affects the dog’s thinking, your dog might end up sniffing the air for no apparent reason. In fact, he won’t even know why he is doing it.

There is no cure for CCD, but there is a treatment that can slow down the progression of the disease. Check with your veterinarian about the best ways to manage this condition.

Raising His Head (Looking Up) to Avoid Drooling

It is possible for dental problems to cause excessive drooling. When that happens, your dog may attempt to raise his head and look up to avoid drooling.

This may appear to you as if he is sniffing the air, but in fact, he is trying to restrict the flow of his saliva by tilting his head up.

If your dog is licking excessively or drooling, it could be a sign of a dental problem. You should take your dog to your veterinarian as soon as possible to find out if this is the case.