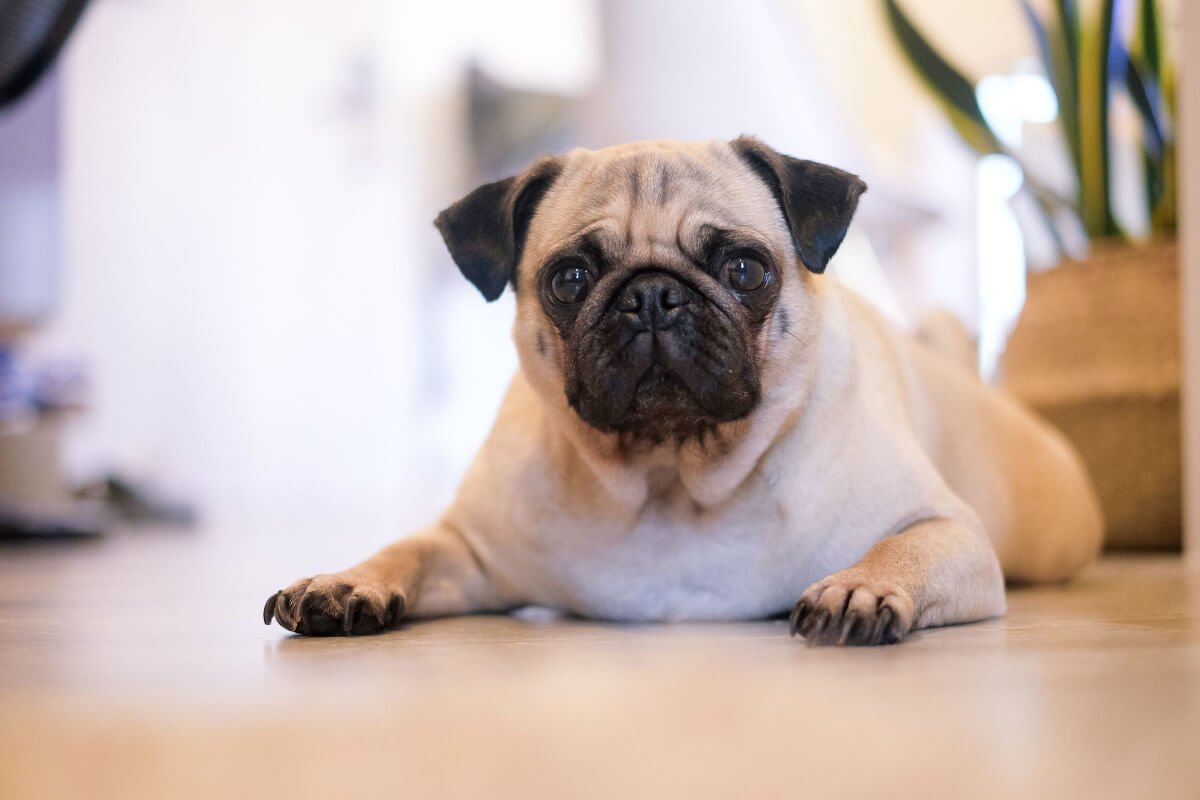 You wouldn’t want your dog to scratch on your freshly painted floor, would you?

So, don’t allow your dog to develop his habit of creating an area in the house to practice his natural instincts.

When a dog scratches the floor, it could be due to his inherited instinct behavior. He could be marking his territory, doing his investigation, easing his boredom and anxiety, or looking for a nesting spot. He might be trying to hide his food, to get comfort or having some medical problems.

You can correct his scratching behavior by addressing:

Dogs living in the wild often do the scratching or digging of the ground to create their den to sleep comfortably in.

For example, in summer, a dog may scratch and dig a hole that offers cooling relief from the heat of the sun. And in the winter time, a dog may dig a similar type of “shelter” for himself when it’s cold outside.

So, it’s kind of a natural instinct for your dog to scratch the floor when he is in the house as he is practicing what he will have to do when he is out in the “wild world”.

That is why, if you happen to be walking with your dog along a roadside, and you come across what appears to be a nice, shallow “pond-like” area, your dog may just start to scratch and dig there to cool off.

You should correct his scratching behavior by distracting him using a treat or toy. If he ignores your “luring”, it could be the case that your “lure” is not enticing enough.

Get some high value meat treats such as salmon or chicken, as that is going to be very tempting for dogs.

The moment he stops his scratching action, and gives you his attention, reward him immediately with a treat and praise him for being such a “good boy!”.

This will create an association that by not scratching on the floor, GOOD things will happen, and he will receive a reward.

Continue with this positive reinforcement training for a few days until he is completely house-trained.

Then, start to wean him off the treats by mixing it up a bit (just praise him or give him a pet on his chest) so he doesn’t get a treat every time he “behaves”.

By starting to use a different form of rewards, you’ll be able to gradually wean him off the treats.

When your dog starts scratching the floor in one area and then moves over to another area (and this behavior continues and becomes more frequent), he may be marking his territory.

Dogs mark their territories in many ways, such as rolling around on their backs, peeing on the floor or scratching the wall and floor.

You can correct this behavior by neutering your dog.

This will eliminate the testosterone drive that is causing him to mark his turf. Once he is neutered, he will no longer have an urge to do territory marking and the scratching behavior will stop.

You can neuter your dog when he reaches the age of 6 months and the procedure is simple and safe. Your vet will explain everything you need to know.

Spaying or neutering is important because it reduces the risk of your pet developing certain types of cancer such as testicular cancer in males and uterine cancer in females.

It also prevents your pet from getting behavior issues such as aggression and territory marking.

Looking For An Ideal Nesting Spot

Your dog could be scratching the floor to find a good spot for him to rest, just like what he would be doing if he were in the garden or backyard.

To prevent your dog from doing his scratching indoors, you would want to make your floors as “uninviting” as possible for your dog so that he will not scratch them.

If you have hardwood floors, you can apply some type of wood polish to them so that when your dog starts scratching on them, the wood will have a slight abrasive “sensation” on your dog’s paws and that will cause him some discomfort and stop him from continuing the scratching behavior.

Another thing that you can do is place a carpet under the areas where your dog likes to do his scratching. This will make it uncomfortable for him to continue his scratching habit.

I would suggest that you should introduce a dog crate for your dog if you have not done so.

Start him on crate training to make him get used to being in the crate whenever he needs a nap, sleep or when he is feeling cold and needs some warmth.

Make the crate cozy for him by placing some chewing toys and a warm blanket in the crate for him.

The goal is to make him see the crate as his den so that he would stop searching for an ideal spot in your house to “create” his shelter.

He Is Doing His Investigation

Your dog smells something that catches his attention on the floor, and he is doing his investigation. He is trying to scratch the floor, hoping to get to whatever catches his smells.

He may even start to sniff the floor and then lick it. His tongue is covered with taste buds, so he can detect even the tiniest amount of an attractive smell.

To prevent him from doing his investigation, always keep the floor clean and do a daily cleaning using a mixture of warm water and a cup of baking soda or vinegar.

This will keep the floor clean and free from any scent that could trigger your dog’s interest.

He Is Entertaining Himself

Your dog could be scratching on whatever surface he can reach out to when he is bored or frustrated. So, scratching the floor is his way to keep him occupied.

You see, if you have your dog “trapped” in the house for the whole day and not giving him any outlet to release his pent-up energy, he will do something to keep himself entertained.

He will start chewing on the furniture, carpet or anything that he can get his teeth into. That said, it is always important to keep your dog’s energy levels in check. Make sure he gets enough exercise throughout the day.

You should take your dog for a long walk three times a day. This will tire him out, so he won’t have the energy to start destroying your home.

You can also get him to play games such as “fetch” with a stick or a small ball. Just make sure it’s something he’s never had before.

Never use the same object twice. Change it out every time. This will keep his mind active and prevent him from getting bored.

Don’t let your dog run around inside the house though. Let him run outside until he’s exhausted.

Dogs need to run. It is in their nature. If they don’t get enough running, their bodies become sluggish and apathetic.

It is your job to keep his energy levels in check so that he doesn’t develop bad habits or cause any property damage.

You could also get your dog a pair of booties to wear while he is indoors so that he would not be able to scratch the floor while you work on correcting his behavior.

To Ease His Anxiety

If you find your dog only performs his scratching action when there is a loud noise (such as a thunderstorm or fireworks), he could be doing that scratching just to ease his anxiety.

Just like humans, we might unknowingly bite our lips or nails whenever we feel nervous. This behavior applies to dogs as well.

What you can do is get him a thunder shirt.

Thunder shirts are typically worn by dogs who are nervous about loud noises or being in public places.

The gentle pressure of the shirt against the dog’s body causes the dog’s muscles to relax and their heart rate to slow down.

Alternatively, you can have your dog crate trained so that he will see the crate as a den that will offer him safe haven and comfort.

And just think: The very act of you giving your dog his very own den in your house will make him feel like part of the family, and this will bond both of you even closer together!

If your home uses ceramic tile floors, your dog might be scratching them as he tries to make it more comfortable for him to rest on.

You see, unlike wooden floors, ceramic tiles often have a wet and cold sensation and can make him uncomfortable.

That’s why your dog might be trying to scratch the floor to get a warm spot.

What you can do is to allocate a designated area in the house as his “roaming” area and place carpet over the tile floor in that area.

This will give him a soft, warm resting place and stop him from continually trying to make the floor more comfortable for himself.

It’s like he has his own little “dog bed” and he’ll be happy to curl up in it whenever he wants to take a nap.

And, of course, you’ll no longer have to worry about him damaging your floors.

To Hide His Food

If you see your dog scratching the floor when you are feeding him, don’t be surprised. He’s probably trying to find a spot to hide his food.

Dogs have a natural tendency to hide their food as this is what they have been doing since wild times to save some food for later use.

To correct this behavior, what you can do is to only feed your dog in his crate and that would prevent him from hiding his “treasure”.

When your dog is performing the act of territory marking, it is not necessarily a bad thing.

In fact, it is an important part of a dog’s socialization process.

Of course, you would certainly like him to do this when he is outdoors (he is out for a walk or play), and NOT in your home.

However, if you notice your dog is excessively marking his territory, you should get in touch with your vet.

Scratching and marking too much could be a sign of some type of medical problem such as fleas, allergies, ear mites, skin problems, or even cancer.

Remember: It’s not “bad” for your dog to mark his territory BUT any excessive marking could be a symptom of a more serious health issue.