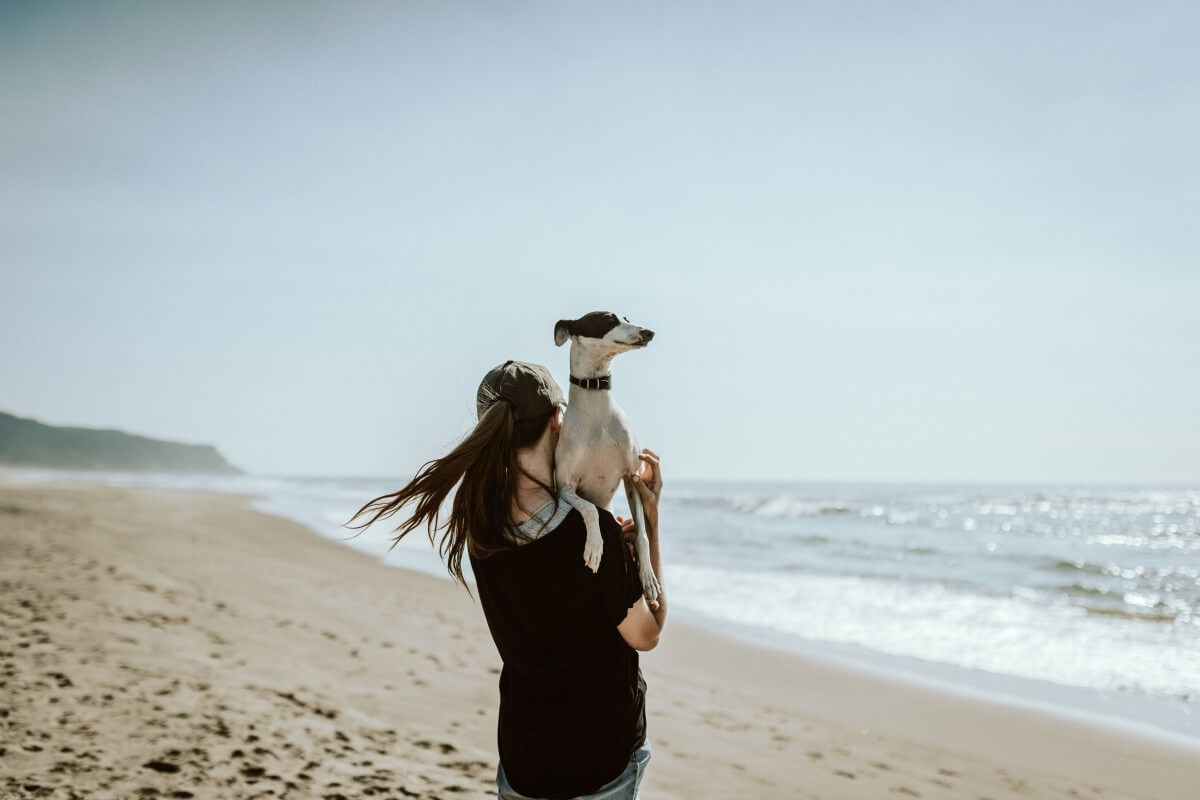 Does your dog pee on you a lot? Or just occasionally? If it’s the latter, you probably have an “accident” when you least expect it.

And that’s Okay… Just start him on potty training. It might probably take some time to have your dog trained on his potty, and you can make him learn fast by adopting a positive reinforcement approach.

The way to train him will be if he does what he’s supposed to do (peeing in the designated spot), you will give him a treat right after his job.

This will make him learn that by doing his potty on the right spot, GOOD things will happen!

He will be encouraged to do this behavior consistently as he knows there will be a rewarding experience waiting for him.

Of course, if your dog still pees on you despite already being potty-trained, there are a few explanations for that behavior as followed:

A dog pees on you when he wants to exhibit his dominance over you. He could also be suffering from some health issues such as UTI that causes uncontrolled peeing, or other psychological problems such as fear, excitement or jealousy. If he is not yet neutered, he could be doing his territory marking on you.

Exhibiting Dominance Over You

When your dog pees on you, he is trying to exhibit his dominance over you. This is often the case when you have not established yourself as his pack leader.

You see, in the dog’s world, when a dog senses he is dominant over another dog, he will “mark” the area where the other dog is with his scent.

Marking a territory with his urine is the ultimate sign of dominance. It means “I am in charge here, and you are NOT to challenge my leadership”.

What you SHOULD do is to make your dog think that YOU are in charge, and he is NOT the boss over here!

How do you do this?

The way to make your dog see you as his pack leader is by being assertive and assuming a leadership role.

1. Make him do something to earn his food. Give him an assignment that requires him to work for his reward.

2. Do not let your dog walk in front of you. Put him on a leash and hold it so that he has to walk beside you or behind you.

3. When entering a door, always make him perform a “sit” and wait for you to pass through the door before giving him a “release” command to allow him to follow you.

4. Do not allow him to be on your couch or bed because that would make him be at the same level as you are, and he would think that he is the pack leader. You must stay at the top level at all times. That’s where the real power and control is.

5. Don’t forget to use the “No” command every once in a while to make him know that he has to adhere to your rules.

To become the pack leader of your dog, you have to let him know that you are the one who makes the rules and gets to call the shots.

You will dictate when, where, and how he should behave, sleep, eat and play.

If you are consistent in your actions (You must not give in to his demands by allowing him to pull you on the leash, jump up and down on you, beg for food etc.), he will recognize that you are his Alpha.

If your dog is feeling anxious when you pick him up and hold him in your arms, he will likely pee on you.

It’s a protective mechanism that his body uses to keep himself calm.

However, if he does this frequently, your other dogs will start to associate you with fear and will also begin to do this as a way to protect themselves.

So what you should do is to find out why he is reacting in this manner?

He could have had a bad experience with his previous owner, or you could have scolded or yelled at him before and that created his fear towards you.

Or perhaps he was abused as a puppy by another dog or person and that is causing his anxiety.

There are many reasons, and it’s important to discover the real cause of his fear before you can start to work on it.

The first thing to do is take him to the vet to rule out any medical issues that could be causing his fear. If he has a physical condition that is causing it, then you can start to work on it.

If nothing is wrong, then you have to work on his training and behavior. Don’t push him too hard too soon. You could make him get worse.

You can start to establish yourself as his pack leader as this will give him some sense of security.

Give him time to get used to you and allow him to approach you gradually. This will give him a chance to see that you are not a threat, and he will begin to trust you. Don’t force him though. This should come naturally.

You will also need to know how to read his body language.

Pay attention to his body language. Watch how he moves.Is he stiff? Does he avoid eye contact with you? If so, he is feeling uncomfortable and anxious.

On the other hand, if he cuddles up close to you or looks you straight in the eyes, he is feeling at ease with you.

Pay attention to his body language. That’s one of the best ways to know how he is feeling.

Also, start paying attention to what he is doing when he is relaxed.

Does he bury his head in your chest when you are petting him? Does he seek your affection when you are not looking?

These are all signs that he is starting to trust you. Give him some time and space to foster that trust!

Is your dog jumping on you when you step into the house? This means he likes you and feels very excited about seeing you!

This is his way of saying “Hi, I’m so delighted to see you!”

And when your dog gets excited, he lets loose with his bladder and produces a strong urge to urinate, which is why he starts to pee on YOU!

It’s hard to believe, isn’t it?

But that’s really what’s going on. What you can do to ease his excitement is by making sure that he gets sufficient physical exercise and mental stimulation to keep his energy level low and be less energetic.

Some exercises that you can do with your dog to provide an outlet for him to let off his excessive energy are taking him out for a long walk, bringing him to a park to run and play fetch.

If your dog is good at playing fetch, have him fetch the ball and then tell him to drop it and give him another one.

Do these activities with your dog every day to help him release his pent-up energy, and he will be able to stay calm throughout the day.

There is a saying, “A tired dog is a good dog” and this is especially true when it comes to training your dog. When your dog is tired from playing, he is less likely to get into trouble.

If your dog has never peed on you before, and he has been doing it since you got a new pet, that could be the reason.

He is doing it because he is feeling insecure or jealous that you are giving all your attention to another new pet and neglecting him.

What you should do is to give him more attention by talking to him, playing with him and petting him, just like you would do in the days when he was the ONLY pet in the home.

When you are giving your affection to another pet, keep him out of sight by placing him in a crate and give him lots of chewing toys to keep him busy.

Keep training your dog (through positive reinforcement) so that he knows if he stops his jealous behavior, GOOD things will happen.

Start with a treat, and reward him for sitting calmly (in his own space) when he sees the new pet beside you.

Keep repeating this until he starts to see that if he sits calmly and does not pee on you, he will be rewarded with treats and your affection.

It won’t happen overnight, but by practicing this approach, you’ll find that your dog will soon learn to accept the new pet in his life without becoming stressed out.

Keep in mind that a jealous dog will do anything within his power to keep his owner from paying attention to another pet.

So be aware that your dog might get aggressive as a result of jealousy and start attacking the other pet.

You should do what you can to correct his jealous behavior as soon as possible.

He Is Not Yet Neutered

If your dog has not been neutered, there is a likelihood that he is peeing on you to do his territory marking.

In the dog world, it is often by spraying urine or some other form of scent.

If your dog is a male, he is marking his turf to establish his dominance and to let other dogs know that he is the top dog in his pack and if she is a female, she is doing it to attract a mate.

This is an involuntary response.

What you can do is neuter your pet as early as possible.

Neutering is the surgical removal of the reproductive organs of a male or female. This includes the testes for male dogs and the ovaries for female dogs.

Dogs are ideal candidates for neutering as early as 6 months old.

This will ensure that your pet will not develop any undesirable habits such as territory marking or humping. It will also prevent the possibility of developing testicular tumors in older pets.

This is why you will often find that half of all male dogs are neutered.

He could be suffering from medical problems such as diabetes, liver or kidney failure. Or, he could have a tumor (benign or malignant) in his bladder or prostate.

This is particularly if your dog is reaching his “golden” age, and he could be suffering from a urinary tract infection (UTI), which can cause him to have incontinence.

Generally, when a dog is 7 or 8 years old, he will be considered an old dog. Depending on the size of the dog, this age can range from 7 to 12 years old.

If you suspect your pet has a medical problem, contact your vet immediately. Don’t wait until the situation gets worse, and it may be too late to help your dog by then.