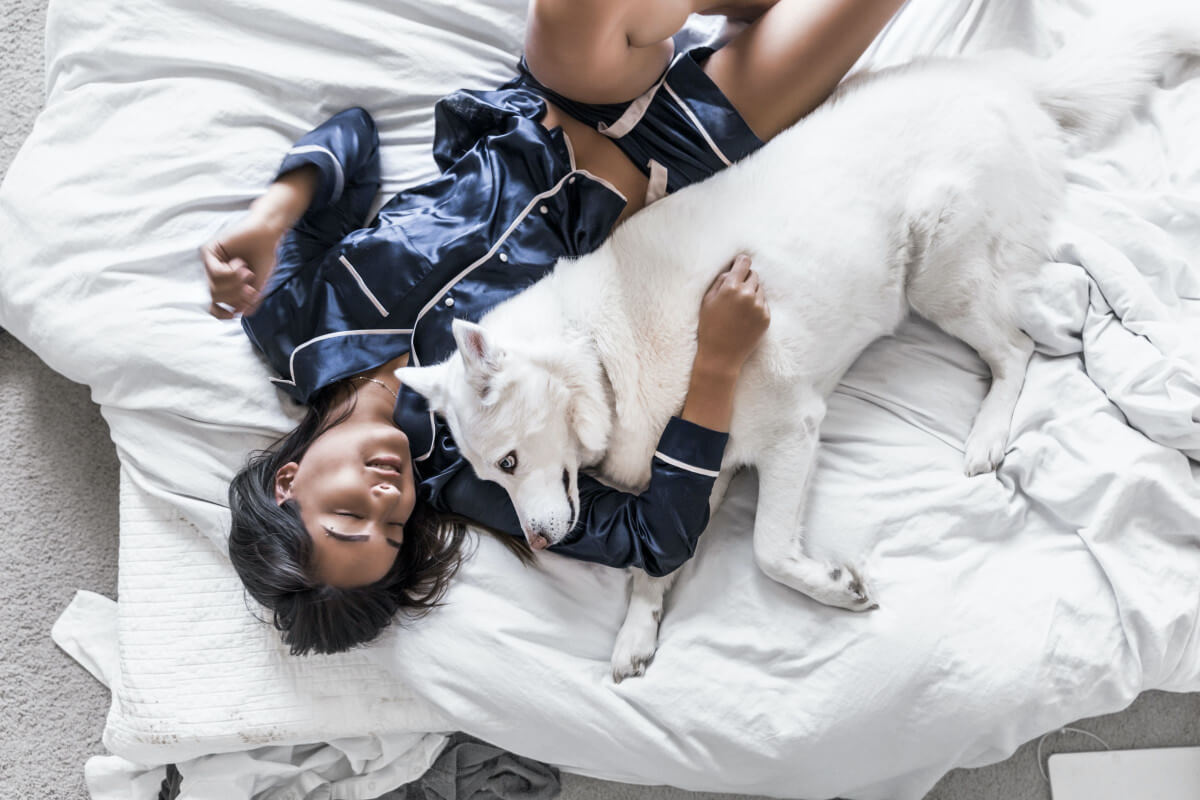 Your beloved dog loves to sleep in the strangest places and one of his favorite spots is to sleep in between your legs.

You are not sure why he likes that “spot”? Maybe it’s because he is feeling cold and needs to get some warmth from you?  Or are there other explanations for this behavior?

Your dog likes to sleep in between your legs because he is trying to protect you from harm. He senses your unhappiness and wants to offer you his comfort. He is feeling fearful and seeks your protection. He is afraid that you will abandon him, or he wants to get your attention. He is feeling cold and seeking warmth from you.

He Is Trying To Protect You From Harm

Did your dog start to behave in this manner only lately when you had a new house member (your wife) in your home?

He is performing his “duty” to protect you by preventing any “intruder” from coming near you.

This behavior is commonly exhibited by family guard dogs such as German Shepherds, Doberman Pinscher and Rottweilers, where their natural instinct is to protect their owners against any potential danger.

So, if your dog belongs to any of these protective dog breeds, your dog is expected to bark, corner and even bite any intruder that he feels is a threat to you.

It is important for you to introduce your new family member to your dog in your presence and under controlled conditions.

Put him on a leash and introduce your wife to him at a safe distance.

It is vital for your furry friend to meet your wife in a calm and peaceful environment that he is familiar with, where he can see that you are feeling at ease standing beside him.

This will give your dog the confidence to feel that you are not at any threat, and he will begin to see your wife as his pack member and accept her into the family.

Your dog has a fair idea of what is happening around him and can sense when you are feeling upset.

By coming close to you and resting on your legs, he is giving you that extra little “hug” and encouraging you to be strong.

By being there with you during your difficult times, he hopes to prove to you that you can always depend on him whenever you need him.

He is going to be by your side to show you that he cares for you and prove his trustworthiness.

It could also be the case that he senses your pregnancy, and his natural instinct “instructs” him to protect you and your baby.

And the way he does it is by staying close to you.

Your dog is able to smell the different pheromones that your body produces when you are pregnant.

He Is Scared of Something

When your dog moves in between your legs, there is a chance that he is trying to hide from something that scares him.

This can happen when there are thunderstorms or fireworks, and he is alarmed by the loud noises.

As he couldn’t figure out where the sounds come from (since he can’t see them), this creates anxiety.

And as his anxiety builds, he will look for someone (usually his pack leader, which is YOU) that he believes will keep him safe.

He Is Suffering From Separation Anxiety

He could be seeking a sense of security from you as he is experiencing fear of being left alone.

By being close to you, this is his way to combat his loneliness and ensure that you will not leave him alone.

In this case, he is likely suffering from separation anxiety and is misinterpreting your departure as abandonment.

He may have a phobia of being left behind when you go to work and could experience fear and anxiety.

He is seeking reassurance from you through sleeping in between your legs that you will not abandon him.

To ease his anxiety, make sure that there are toys to keep him occupied when you are busy doing other things, so he doesn’t get bored. This will keep his mind from thinking about you.

He Is Seeking Your Body Warmth

Sometimes a change in temperature can really disturb a dog.

He is feeling cold and by moving in between your legs, he gets the warmth that will make up for what he is missing.

Short-haired breeds such as Boxers, Dalmatians, Great Danes and Pugs are more susceptible to colds in the winter as they do not have long, thick fur to protect them from extreme temperatures.

Signs to look out for when your dog is feeling cold, including shivering, barking, hunching posture with a tucked tail, cuddling in some warm spaces such as your body or legs.

His body will be shivering as he tries to find a comfortable warm spot to settle down. This is often the case when the weather gets cold, and you do not have a house heater running or any warm blanket to keep him warm.

So, if your dog is a short-haired breed, you would need to provide him with a warm place to get to whenever he feels cold.

There are various ways to achieve this, such as getting him a thick blanket or heating pad to rest on, making him wear a dog jacket or installing a heat lamp near his crate so that he can warm himself as he sleeps in the crate.

He Is Being Possessive

Your dog is telling the other pet that you belong to him. This is often a sign of possessive behavior and a bit of a territorial pet peeve.

By sitting in between your legs, he wants the other dog to know that you are his!

And if the other dog attempts to move near you, he is going to give him a warning growl or a snap to get him back off.

You will be surprised to know that your dog acts in this possessive manner only when you are around!

When he is alone with the other dog, he is perfectly fine and friendly with him. However, when you are around, he will want to keep the other dog away from you.

To stop your dog from being possessive of you, you will need to be his Alpha to make him be submissive to you.

He Is Asserting His Dominance

He is trying to reclaim his “turf” by resting on your legs as you are invading his territories.

The spot that you are sitting on belongs to him, and he is trying to get you to move out.

You need to allocate a certain resting spot for your dog in the household so that he doesn’t feel like you have invaded his private space.

The way to do this will be to have him crate trained so that he sees the crate as his den and he will not be obsessive about claiming other spots in the house.

The other thing that you ought to do is to make him see you as his pack leader. This will make him submissive to you and be more obedient.

You, as the pack leader, will be the one who decides where he should sleep, eat and play!

He Wants You To Play With Him

Boredom can make your dog act weird, such as chewing on things, digging your garden, pushing his head into you or getting in between your legs just to get your attention.

If you find your dog is acting strangely, it is time to make sure that he is physically and mentally simulated.

Unlike humans, dogs like to be active. Your dog doesn’t want to sit on the couch and watch TV with you which explains why he keeps coming close to you.

He wants you to play with him and if you ignore him, he will sleep in between your legs waiting patiently for your response.

Make sure you provide him with enough exercise and entertainment, such as playing fetch, flirt pole, tug of war, chasing bubbles, going on a walk, or letting him explore the backyard to look for his hidden treats.

You can also teach him some tricks to keep him mentally stimulated and busy.

Dogs that aren’t getting enough simulation may become destructive and indulge in bad habits, such as chewing, digging and barking.

This is especially so for high energy dog breeds such as Border Collies, Australian Shepherds and German Shepherds.

If your dog is one of these breeds, he will be very energetic, and you will need to provide enough play time for him to release his pent-up energy.

Your dog will benefit greatly from a healthy simulation routine to do the things he enjoys.

You Have Inadvertently Encouraged Him to Do So

Did you ever praise and give your dog a pet on his head when he comes to you and sleeps in between your legs?

If you have done so, you have unintentionally encouraged him with this behavior. You see, dogs like to do things that please their owners.

The feeling of getting your affection and love from this act has reinforced this behavior to become a habit.

Whenever your dog wants to get some sleep, he will come to you and expect you to pet him on his head again.

This is especially so if he is not getting much attention from you in other ways.

What you can do is to make him associate this act with bad experiences, such as giving him a stern and firm “No!” and showing him your unpleasant expression.

This way, he will learn to associate your attention to this action with something undesirable and will stop his attempts to do this.

By performing a few rounds of corrections, he will get to know what you want from him, as dogs are intelligent animals.