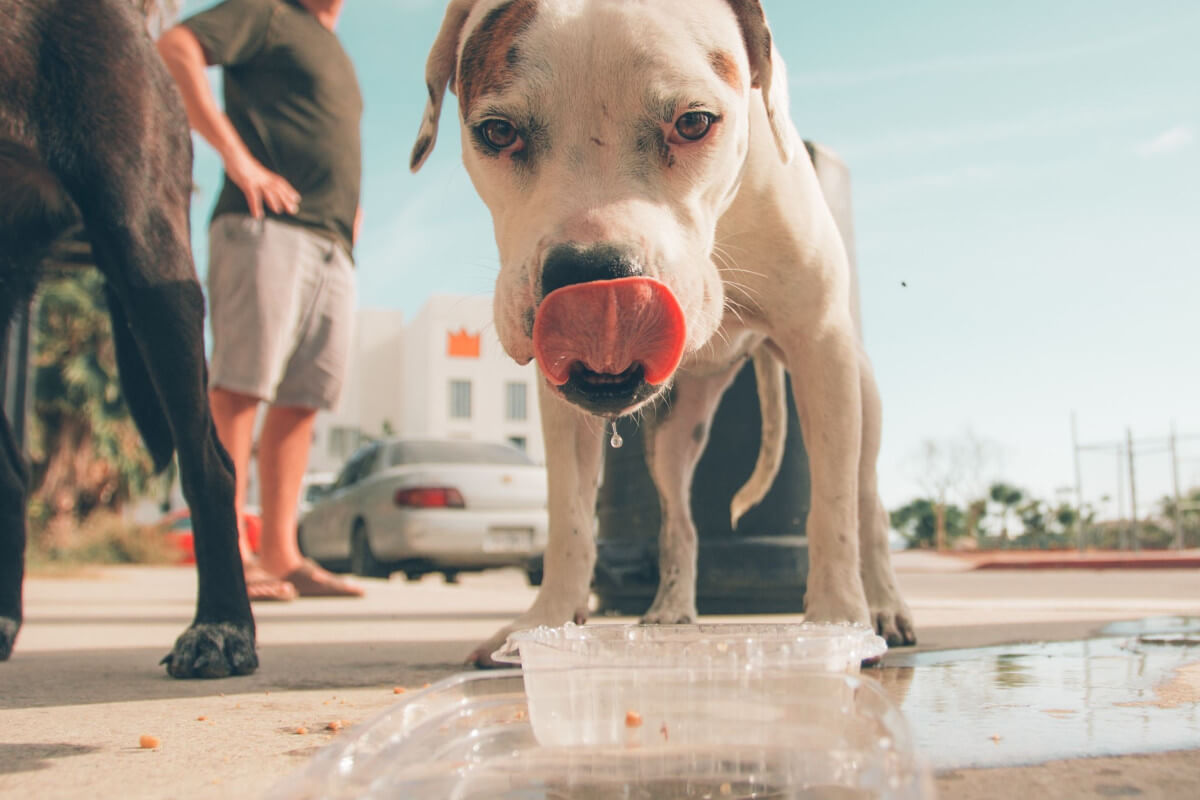 This makes you wonder why he is behaving in this way?

Your dog is licking other dogs’ pee because this is an instinctive behavior of him being a dog. He could be seeking females in “heat” behavior or feeling dehydrated and trying to quest his thirst. He is aroused by the sweet scent of the urine or suffering from a health issue that leads to his persistent thirst.

An Instinctive Behavior Of Him Being A Dog

You may find the act of your dog licking a pool of urine to be disgusting, but it actually comes as a natural act for him.

He is using this approach to gather information about his pack members who had been here before.

Your dog certainly doesn’t find the urine to be smelly (anyway, dogs DO like smelly things which is why they often like to roll on dead animals, poop and mud) and by sniffing on the urine, he gets to know some basic information left by his pack.

And if he is keen to know more in detail (such as the gender, age, health, breeding status of the dog- neutered or spayed or if she is fertile), he will then lick the urine.

This is likely to be the case when your dog is not yet neutered, and he is in search of a female in heat so that he can mate with her.

You see, male dogs possess a vomeronasal organ (Jacobson’s organ) that is used for detecting hormones.

He is able to sense the hormonal changes in the female as she enters her heat cycle just by licking her urine.

So you should consider neutering your dog if you wish to stop his mating instincts.

Most veterinarians agree that the best time for neutering is when your dog is about 9 to 12 months old.

Some benefits of neutering your dog include a reduced chance of prostate cancer, lower risk of urinary tract infections and testicular cancer.

Your dog is also going to be less aggressive toward other dogs once he is neutered.

Of course, there are some dog owners who feel that it is “cruel” to neuter a dog when he is just an adolescent.

However, this is not true. In fact, most veterinarians agree that it is better to spay or neuter your dog as soon as possible because this minimizes the risk of developing cancer.

So, if you want to protect your pet’s health, then you should have him neutered right away when he is suitable for the procedure.

Also, a female dog in heat will also lick on other dogs’ pee.

While female dogs will rarely lick their own urine, they may lick other dogs to learn about their surroundings.

They will behave more aggressively towards a male when in heat and also show signs of drooling and leg humping.

However, female dogs will not lick other dogs’ urine as vigorously as males.

“Sweet” Scent From The Urine Arouse His Curiosity

As you probably know, dogs possess a superior scent, and it is not surprising for them to smell something that we humans would not be able to detect.

Your dog could be smelling a sweet scent of urine and that arouses his curiosity and appetite to give it a lick to taste out the urine.

This “sweet” urine could be peed by a dog that is suffering from diabetes and that special taste certainly makes him irresistible and keeps licking.

You may probably be wondering if your dog is going to fall sick from doing that?

In fact, it is common for dogs to drink his or other dog’s urine. So it is unlikely for your dog to get sick as the amount of urine that he will be licking will be very little.

However, if he has other symptoms such as diarrhea or vomiting after drinking the urine, you should see a veterinarian immediately.

You should always have your dog vaccinated as soon as he is able to do so, probably when he reaches 6 – 8 weeks old.

Thereafter, he should be given a booster every 4 weeks.

This will ensure that he will be well-protected from many diseases, such as distemper, influenza, parvovirus and leptospirosis.

This is the reason why many dog owners vaccinate their dogs regularly.

Did you find your dog starts licking on other dog’s urine only after he had a rigorous play session?

You may also find him drinking his own pee as well.

This is usually a sign that he is dehydrated and looking for water to replace the lost fluids.

If you have been feeding your dog with dry kibble and not providing him with adequate water, he is going to get dehydrated easily.

This is especially so when he is playing hard in hot weather.

So keep a lookout for some common signs of dehydration such as dry nose and sticky gums, excessive panting, dry looking eyes as well as lethargy that your dog is exhibiting and give him water immediately to prevent heatstroke.

I would also suggest that you make a change to his diet (feed him with moist kibbles) and freshwater to keep him hydrated.

While licking other dogs’ pee may seem like a normal part of the dog’s life, it can also be a symptom of underlying conditions.

If you find your dog persistently licking on other dog’s pee as well as his own pee for no obvious reasons, it could indicate an underlying health issue.

He could be suffering from diabetes, kidney or liver disease or cancer that leads to his excessive thirst.

Your veterinarian will conduct a thorough examination to check for any signs of disease or illness, and may recommend further tests to rule out other conditions.

A Rewarding Experience For Him

Did you give your dog that special attention whenever he started licking his own urine?

That could explain why he does that similar action (licking on other dog’s urine) when he is out for a stroll.

He wants you to notice him, to give him a treat, and to say “good boy” to him!

The truth is, he knows what it takes to get your attention to him.

So, if he finds that you are ignoring him during a walk, he does what he needs to have your attention back to him.

So it is important that you do NOT reward (give him attention, praise or give him treats) him for performing any behaviors that you are trying to avoid.

Then he will learn to change his behavior in order to get the rewards that he wants.

This is called positive reinforcement, and it is a great way to teach your dog how to behave.