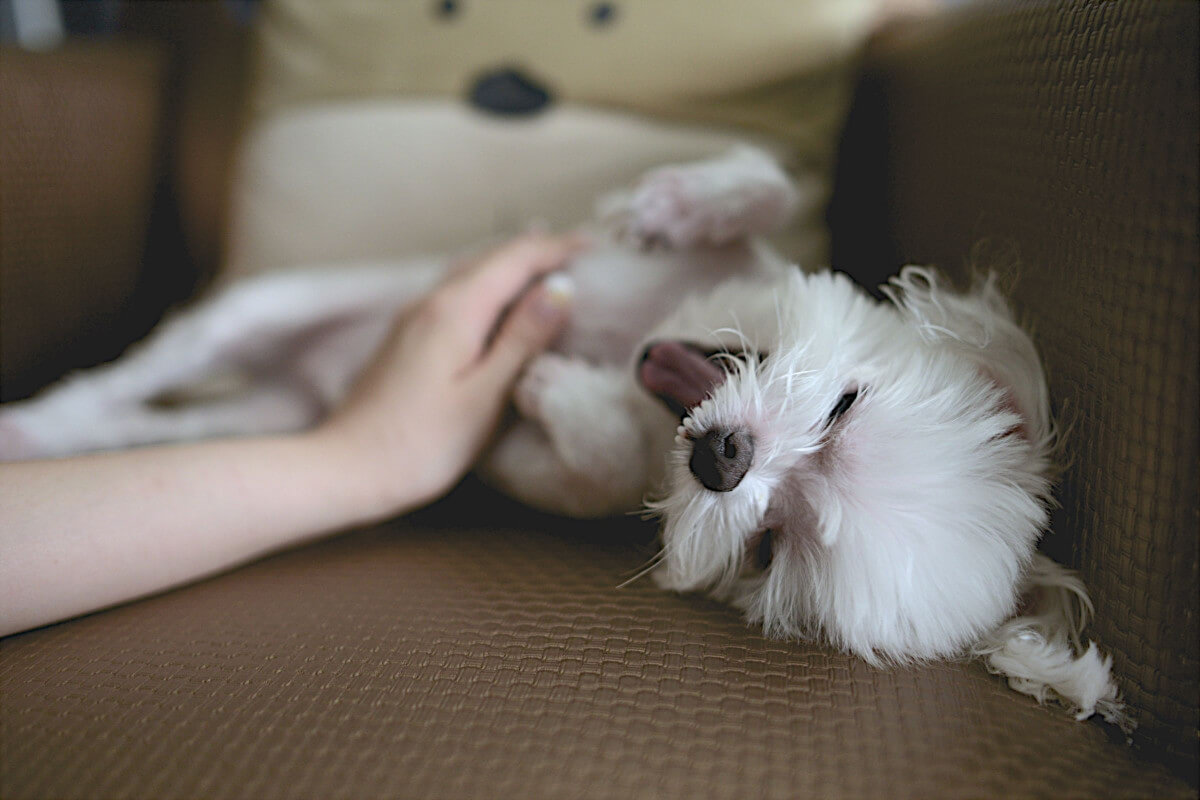 Your dog was sleeping on your lap with his tongue sticking out and this makes you wonder if he is doing that to cool himself down or if there is more to that?

Your dog is sticking his tongue out when sleeping for various reasons, such as he is feeling relaxed, trying to cool down, due to loss of lower teeth, nerve dysfunction in his jaws and tongue, side effects from medications, trying to breathe through his mouth, dreaming or having nasal discomfort.

He Is Feeling Relaxed

It is natural for your dog to feel relaxed when he is asleep and this causes the muscles around his jaws to loose up and “make way” for his tongue to slip out.

As long as he is not panting or breathing heavily when he is awake, he should be fine, and you should not get too worried about it.

He is Trying To Cool Down

What would a dog do when he is feeling too hot?

Sticking out his tongue to expel the heat, right?

You see, unlike humans, dogs do not have sweat glands in their skin to regulate their body temperature.

Instead, they rely on panting and sticking their long tongue out to make contact with the air to have their saliva evaporate and provide that cooling effect for their body.

That explains why your dog does this act in his sleep.

He is feeling too hot in a room that has poor air ventilation and that makes him uncomfortable.

What you should do is to make sure that you have prepared a well-ventilated sleeping place for him.

You can also get him a cooling pad to rest on during hot weather to keep himself cool or to turn on a fan to keep the surrounding air chilled.

Make sure that he gets sufficient water to stay hydrated because thirst will also make him stick out his tongue to cool off.

Do not believe in the myth that long haired dog breeds (such as Yorkshire Terrier, Bearded Collie and Briard) get heat-up much faster than short-haired ones, and have your dog’s fur trimmed just to keep him cool.

This sudden change of his appearance can upset him and doesn’t help in regulating his temperature since dogs don’t sweat!

However, if your dog belongs to Brachycephalic (flat-faced) breeds (such as Japanese Chin, Chow Chow, Boston Terrier, Shih Tzu and Pug), he may see him sticking his tongue out and panting much more regularly because of his inherent inefficiency in cooling himself due to the shape of his nasal passages.

There is also a saying that because the tongue of brachycephalic breeds is just too long for his mouth, so he had to let it hang out during his sleep.

Do you believe it?

Loss Of The Lower Canine Teeth

With nothing to “hold” back his tongue, it is of no wonder that you will find your dog’s tongue sticking out of his mouth during his sleep.

You see, your dog’s tongue will be lolling to one side of his mouth when he sleeps sideways and without his lower teeth to rest on, it is natural that his tongue will be “hanging” out.

This dental problem will be more common in senior dogs (more than 10 years old) as they start to lose their teeth.

Nerve Dysfunction In His Jaws And Tongue

Nerve injury to your dog’s head, neck, jaw or tongue could potentially cause him to stick out his tongue without knowing it.

The result of this nerve injury is a loss of muscle control in the jaw and that makes him have difficulty opening and closing his mouth properly.

He could be losing his control over his tongue as well.

This could be caused by an injury to the mandible, the upper and lower jawbone or there is damage to the nerves that control his tongue.

Some common symptoms that are caused by nerve dysfunction include excessive drooling, chewing problems, lack of coordination and even tongue thrusting.

If you observe these symptoms, bring your dog to a vet for an examination immediately.

Side Effects From Medications

If you observe that your dog only starts to have this behavior after starting on some medications, it could probably be a side effect of these drugs.

Sometimes, medications could cause a dog to suffer from some form of nerve damage leading to muscle spasms and other forms of involuntary movement.

This is especially true if your dog is already suffering from neurological conditions.

If your dog is showing any of these signs, it is very important to consult your vet right away.

Your vet will need to rule out any underlying health issues before they can properly diagnose the problem.

Breathing Through His Mouth

Some breeds of dogs, such as flat face dogs, tend to breathe through their mouth when they are asleep.

This is because of their shorter noses, narrow nasal passages and a small windpipe, which makes it difficult for them to breathe through their nose while sleeping.

And when he breathes through his mouth, his tongue will be sticking out from the side of his mouth since his jaw will be opened.

Just like humans, dogs can have dreams in their sleep.

If your dog is feeling excited or nervous in his dream (he is chasing a cat or running away from something or getting treats that are enticing to him), you will see him sticking his tongue out of his mouth and start panting in his sleep.

This is likely to happen when your dog goes into a rapid eye movement (REM) sleeping cycle which can last for about 6 minutes.

But if your dog is acting agitated and restless in every of his sleep, he may be having more than just normal dream activity.

You should bring him to see a vet for further diagnosis.

This caused him to have difficulty breathing through his nose as he had nasal congestion.

You will see him trying to breathe through his mouth with his tongue sticking out in a panting state and starting to cough or sneeze persistently.

He will be breathing in this way all day long and not only merely during his sleep.

A cold or flu can cause this condition. It can also be triggered by allergies, sinus infections, or hay fever.

Grass or insects could also get into his nose causing the “blockage”.

Do a visual inspection on his nose to see if you could find any things that got stuck in his nostrils.

If you cannot find anything there, you should bring him to see a veterinarian for further evaluation.