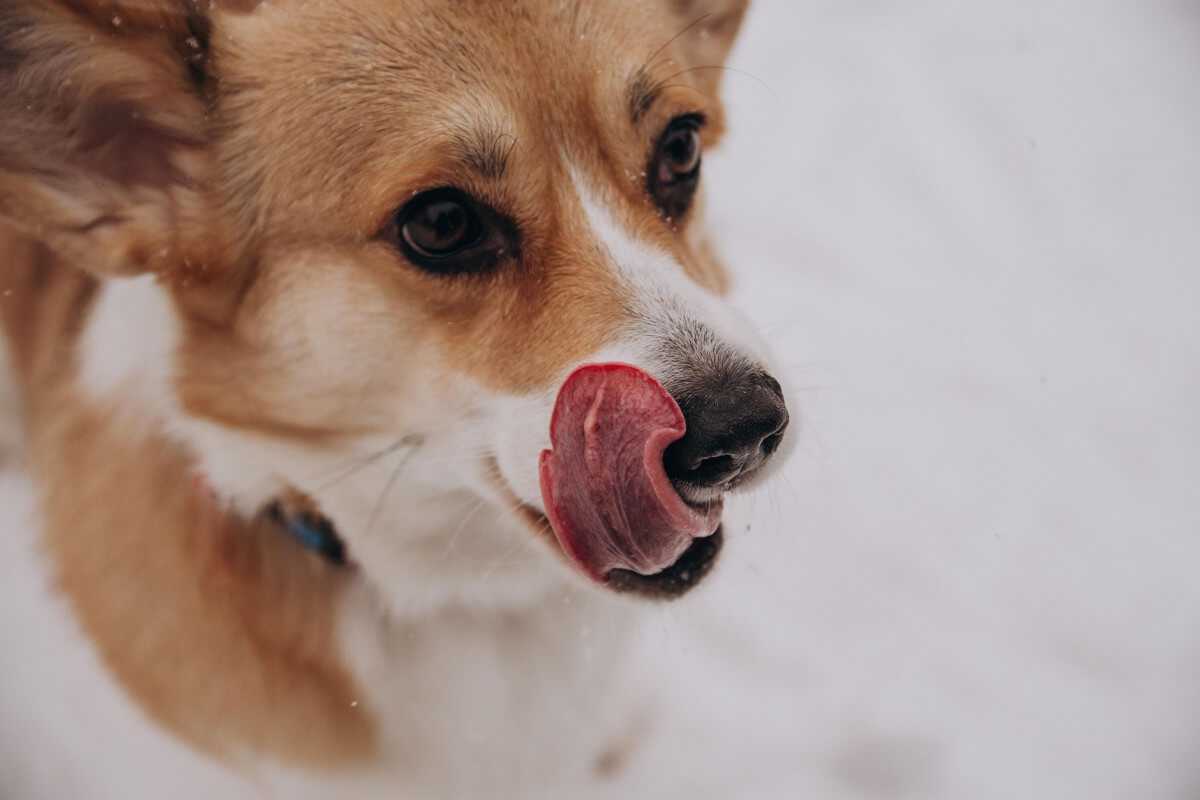 Dogs are naturally inquisitive and playful and licking each other’s mouth is their way of expressing their friendliness.

Having said that, there is certainly more than just this explanation for their licking behavior.

Your dog is licking another dog’s mouth for various reasons such as to show his submission, demonstrating his friendliness, to offer his apology for a rough play, to investigate abnormal mouth scent, to learn the history of the dog, grooming him, or expressing his affection for him.

To Show His Submission To The Other Dog

When your dog meets an unfamiliar dog that he considers to be dominant, he would want to show his submission to him.

And the way to do this will be to lick on the another dog’s mouth.

This is a canine way of telling the dominance dog that he is being submissive and to show his respect for him.

You will also see him exhibiting submissive body language, such as lying down and moving his ears back. He will lower his gaze and make his body look “smaller” with his tail held low.

Your dog is expressing his friendliness to another dog that has showered him with attention through his friendly mouth-licking action.

You see, dogs can be pretty amazing at reading each other’s emotions and moods.

Being social animals, they will often form friendships with one another easily.

Sometimes a friendship will develop between dogs who have no apparent connection to each other if both express their affection towards one another.

They will lick and groom each other around the face and mouth as a way of saying “Hello!”.

In fact, in the dog world, licking is similar to receiving a pet from humans!

Abnormal Mouth Scent From The Other Dog

Dogs possess an amazing scent of smell, and it is not surprising that they are able to smell the disease-causing odor that is happening to other dogs.

So, when your dog finds an unfamiliar odor in the mouth of another dog, that will trigger him to do his investigation by licking the other dog’s mouth.

Dental issues such as rotten teeth, infection of gums or jaws, bad breath caused by digestive problems can bring about the presence of a smelly odor in the mouth.

To Offer His Apology After A Rough Play

When the play turns rough, one of the dogs (usually the submissive one) will offer his apology by licking the mouth of the dominant dog.

He is trying to communicate his peaceful intention and his desire to have a good relationship with the other dog.

The dominant dog will usually accept this apology and, to show that he is not upset, he will lick him back on his mouth.

You will then see them start playing again after the licking.

This is a good sign as your dog will know the “limit” that he can go before things get out of hand (the other dog turns aggressive).

He Is Grooming The Other Dog

Licking is an essential part of grooming. So, when your dog licks the mouth of another dog, he is in fact trying to groom him.

He may have seen some tasty food residue sticking on the other dog’s mouth or there is skin infection around the mouth, and he wants to clean up for him.

As dogs are pack animals, they will do whatever it takes to make themselves look good within the pack.

And your dog is certainly helping him with that!

Learn More About the Other Dog

Your dog can learn a lot about the other dogs from their scent glands.

These pheromones are known as “dog scent” or “dog odor”, and they play a big role in communication between dogs, especially during social interactions.

So, when your dog licks the face or mouth of another dog, he will be able to gather information such as if they had met before, is he aggressive, his health status, age, breed etc. and this helps him understand more about his new friend.

Expressing His Affection For Younger Dog

The dominant or older dog will usually do this (licking on the mouth) to a younger or junior dog as an expression of affection and approval.

If the younger one is submissive, he will roll onto his back as a sign of submission.

So, when your senior dog does his licking on another junior dog, he is expressing his comfort to the other dog.

It is a normal part of his socialization process and a sign of affection.

In fact, licking is a way for dogs to express their love!

A Behavior He Had Picked Up During Puppyhood

Puppies are naturally curious, and they want to know what is going on around them.

They will often lick objects, people and their siblings to learn more about them.

The mother will teach the puppies with her licking and teach them discipline.

They will in turn lick on their mother’s face and mouth to let her know that they are hungry.

This licking habit never goes away, even when your dog grows up.

So, when your dog sees another senior dog that he looks upon as his mom, he will lick her mouth, just like what he did when he was still a puppy.