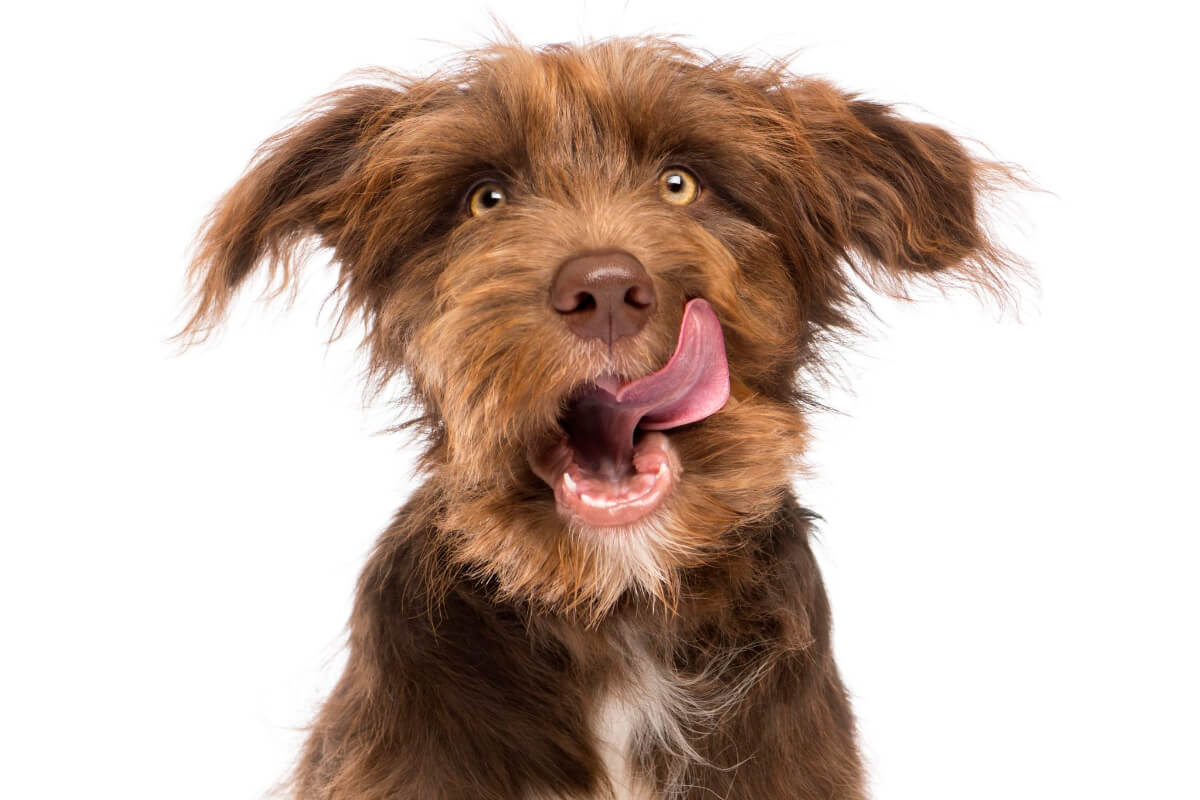 Dogs love to be scratched. This is something that all dog owners can agree on. But why does your dog lick the air when he is being scratched?

Your dog is licking the air when you are scratching his bum because he is feeling nervous and frighten. He had an unpleasant experience associated with scratching. The other explanation is that he is expressing his joy because you have helped to scratch on the spots that he cannot reach.

Not all dogs like to be scratched especially in areas that they can’t keep a lookout of. This is particularly so if dogs have been ill-treated previously and are wary of humans.

If you had just adopted your dog from a shelter, he might have had a horrifying experience with his previous owner and that left him with an intense fear of humans.

And when you have your hand on his vulnerable parts such as his belly and bum, he will naturally get nervous and anxious.

He knows that you are his pack leader, and will take good care of him. So, he will try to calm himself by licking the floor and the air.

And since licking will release endorphins in his body, that will make him feel better and more relaxed.

It could also be the cause that your dog is suffering from an injury, skin disorder, arthritis or other joint related discomfort and dislikes anyone petting him.

So, when you have your hands on his body, he will start feeling uneasy and try to get away. If he is not able to move away, he will start licking his paws, floor and air just to calm himself.

How to Ease Your Dog’s Anxiety?

You need to help him get comfortable with you through obedience training. This way, he will feel more confident and relaxed.

Begin with a gentle approach. Don’t start by rubbing his vulnerable parts of his body such as belly or bum.

Instead, gently place your hand on his chest and move it around slowly. He will notice the movement of your hand and will get more comfortable and relaxed.

You will need to be patient and keep on giving him positive reinforcement and rewards. You can give him treats or praise him when he is reacting calmly with your touch.

He will be able to tell that you are not going to harm him and this will make him feel less anxious and nervous.

This positive reinforcement method will help your dog learn that good things will happen when you pet him, and he will slowly start to trust you.

You see, dogs love to be scratched, especially in areas where they are unable to reach for themselves.

That is why, when you scratch your dog’s belly and bum, he will exhibit signs of pleasure and enjoyment as these are the spots that they are unable to reach.

However, in contrast to humans who can say things such as “I am enjoying your scratching” or “Thank you for giving me a scratch”, dogs cannot speak such words.

It is simply impossible for him to verbally express his feelings of joy – “Hey, that feels great.”

He has his own way of letting you know that he is enjoying your scratching and sticking out his tongue to lick the air is his way of expressing his joy.

He is trying to tell you “YES, that’s exactly what I want!”

How to tell if your dog is enjoying the scratching?

When your dog enjoys being scratched, you will often see him wagging his tail and licking the air.

Wagging of the tail is one of the main signals that your dog is expressing his enjoyment and happiness.

He Is Expressing His Gratitude to You

Just as we love to scratch those hard-to-reach places on our back, so do your dog.

This is especially so in the area closest to the base of his tail, where it tends to be very sensitive because it has lots of nerve endings.

And when you scratch on this spot, it makes your dog feel so relaxed, and it’s going to be a pretty instinctual thing for him to try to lick you as his way to show you his appreciation.

And if he can’t reach your face, he will just lick the air instead. It’s a very instinctive act to show his gratitude for you.

It’s his way of saying “thank you” to you.