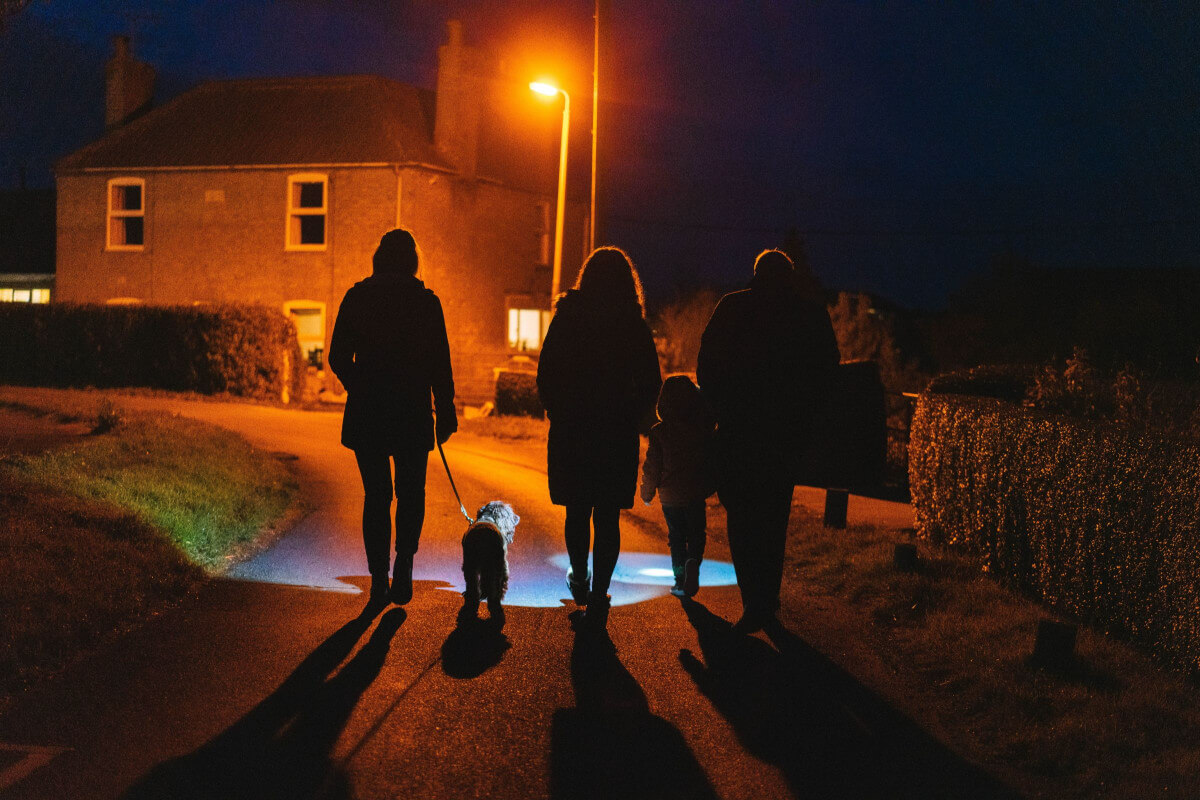 Are you facing the challenge of taking your dog for a stroll at night? Is he freaking out in fear with his tail between his legs and refusing to take any steps out of the doorway?

If this is your situation, then it’s time to find out what’s causing your dog to react in this way?

Your dog is scared of walking at night because of the terrifying experience that he had previously encountered. He is wary of what could be lurking out in the street at night. His impaired vision makes him fearful of dark places. He is too exhausted for any night walk or feels unease walking along an unfamiliar street in the dark.

A Terrifying Experience Has Been Associated with His Night Walk

He could have been attacked by another animal during a night stroll or gotten run down by a fast moving car in the night and that terrifying experience has caused him to be so scared of being out at night.

This fear and trauma stays in his mind and when the night comes, you will see him stay away from any places that are dark and out of light.

He believes that if he ever goes out at night, he will be in danger.

Uncertainty About What Could Be Lurking at Night

Dogs are generally afraid of the dark. This is because they do not know if anything will be lurking around the corner and waiting to pounce on them.

That is why their alertness level will be at a peak and their eyes are constantly moving and scanning the area for possible danger.

The need to be on constant look out makes your dog hate going out at night.

Imagine he had to remain vigilant and watchful throughout the walk and being always worried about any potential threat hiding in the dark corners that could strike him at any moment.

This is particularly if there are coyotes being spotted around your neighborhood, and they like to wander around in the night.

Your dog can sense their presence and this makes him uneasy and scared of being out in the night to avoid being attacked.

And if your dog is a German shepherd, collies, or golden retriever who is sensitive to sounds, he can easily perceive any subtle sound from the street during the night stroll as the environment gets dark and quieter.

This freaks him out even more as he seems to hear strange sounds coming from all directions, and he can’t see their presence.

Health related issues such as diabetes or aging could lead to your dog developing vision problems. He is having difficulty navigating and getting around safely in the dark.

As a result of being unable to see clearly in low light (dark), your dog may become hyper-alert to stimuli that would otherwise be familiar to him during the day.

This makes him dislike going out at night as he cannot see well enough to avoid threats and hazards.

What you can do is to take him out on a leash. This will enable you to guide him safely through the streets and help him avoid potential hazards.

And of course, you should also take him to see a vet for a checkup to make sure that this vision issue gets addressed immediately.

A dog who has vision impairment is at risk of getting hurt because he cannot see well enough to sense threats.

If left untreated, his condition could worsen and become permanent. Your vet will determine the root cause and advise on the treatment for your dog.

He Is Too Exhausted For Any Night Walk

Your dog isn’t really afraid of night walks but is reluctant for any further activities as he is simply too exhausted.

This could be the case if you have planned too many physically exhausting activities for him during the day and his energy is fully depleted when the night comes.

He is over fatigued by the time the night arrives, and is simply too tired to walk.

So you ought to take into factors such as the breed, age and health status of your dog when planning physical activities for him.

This is especially so if your dog is getting on in age. He will lack the energy to run, play or do anything that he used to love as his body is not as robust as it used to be.

He is simply too exhausted or lethargic to engage in any walk at night after engaging in the games that you have planned for him earlier in the day.

You would not want to overtire your dog during the day if you plan to have a night walk with him after dinner.

A tired dog would not enjoy the fun and excitement that you had planned for him.

On the other hand, if your dog belongs to “lazy” dog breeds such as Bulldogs, Pugs and Pekingese that are “couch potatoes”, that may explain why he is reluctant to go for any night walk.

He Finds Himself Walking In An Unfamiliar Street

Your dog tends to get nervous when he finds himself walking along an unfamiliar street with different scent, sights and sounds.

This anxiety is further accelerated in the night as it’s his natural instinct to step up his guard to avoid any surprise attack in the dark.

These unpredictable surroundings make him feel unsafe, and he would want to avoid walking in dim streetlights.

This is why you must always be aware of your dog’s comfort zone and keep his routine as predictable as possible.

You might want to take him on a walk in a new neighborhood during the daytime, since he will probably be more comfortable doing so than at night.

Take a route that has fewer triggers and stay on the same route every time. Start with a short walk and only increase the walking duration when your dog feels comfortable and relaxed.

Providing treats is a great way of distracting your dog, so make sure that you have some yummy treats with you during the walk.

Giving treats to your dog when he is reacting well to the walk will act as positive reinforcement for him.