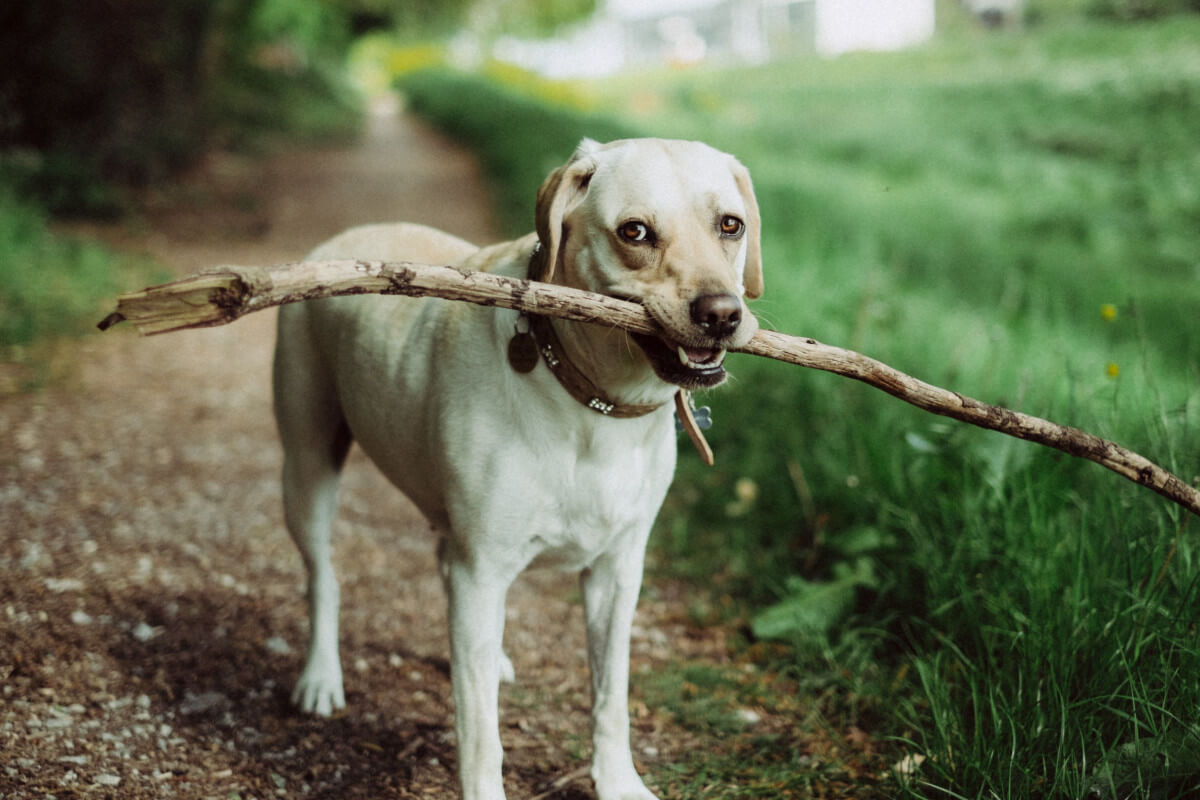 If you own a dog, you’ve probably wondered why on earth would he want to carry a stick in his mouth?. What is so special about the stick that it makes your dog simply “crazy” over it?

Let’s read into his mind to uncover the reasons.

Your dog is carrying a stick in his mouth because he likes the chewing texture of the stick. The earthy rich scent of the sticks captivates him. The appearance of the stick resembles a bone and that makes him think that he has found a prey. He is practicing his natural instinct to be a retriever. You had unknowingly encouraged him with this behavior.

Sticks Resemble Bones in Terms of Size and Shape

We know that dogs descend from the wolf pack, and they possess sharp and strong teeth and jaws. This enables them to eat any part of their prey, including their bones.

This instinctive predatory behavior is still within modern dogs despite the fact that they no longer need to hunt for their prey.

So, when your dog sees a stick that resembles a bone, he will think that this is something valuable that he should bring back with him.

That explains why you will often see him coming back home with a stick in his mouth.

He is bringing back what he considered as his “prey”.

The Chewing Texture Of The Stick Tempts Him

Regardless of whether the twigs are wet from rain, fresh and thriving, or old and brittle, your dog will always find something new when he bites into them.

This makes them even more appealing to your dog.

The wooden spongy stick offers a great texture for him to sink his teeth into and gnaw on. He sees it as a great way to satisfy any chewing urges he may have!

This is especially so if your dog is undergoing his teething stage or if he is suffering from any broken teeth and sore gums.

Your dog will start to crave something hard to chew on to numb the pain in his mouth, and the brittle texture of the stick fits the bill.

In addition, certain types of wood, such as those from willow trees, provide relief to your dog’s teething and gum pain if he chews on them.

This makes your dog feel that chewing on a stick will help to cure his dental pain.

The Savory Smell From The Stick Captivates Him

Your dog will be attracted to the earthy and rich scent of sticks because they have a natural scent.

And with a strong sense of smell that your dog possesses, the scents of the sticks will be irresistible to him, and that explains why he gets his mouth on them.

Your dog will be able to detect the subtle environmental scents associated with the sticks, making it easier for him to adapt to the surrounding terrain.

It’s certainly amazing how much your dog can learn from his surroundings simply by sniffing on the sticks and that’s how dogs survive in the wild.

This is why it is important to give your dog an outlet for his innate desire to search for smells whenever there is an opportunity, such as taking him out for a stroll or playing in a dog park.

He Has a Natural Instinct to Be A Retriever

Dogs inherit the instinct of retrieving objects from their ancestors.

Traditionally, they are bred and trained to ‘retrieve’ their prey and bring them to their master.

It’s a behavior bred into your dog’s DNA that has been passed down over centuries, so even though it’s not instantly obvious, it’s instinctive.

This is especially so if your dog is a hunting breed such as a Labrador Retriever, Brittany, English Setter and Beagle.

Thus, when your dog is scouting in your garden, it is a natural act for him to bring back something for you.

And since sticks are plentiful in the yard, that makes it a perfect “target” for him.

You Have Encouraged Him for This Behavior

Dogs have a natural desire to please their owners and your dog is no exception. He will do anything that makes you happy.

And if you have ever given him a pet or praised him when you see him biting a stick in his mouth, that will give him the impression that this behavior will make you happy.

He will associate this behavior with your approval and will be more than willing to repeat it.

So be mindful not to send the wrong “signal” to your dog and ONLY give him positive reinforcement whenever he does something that you want him to do.

Make sure you only reward your dog for the desired behavior that you want him to perform through training.

He Looks Upon Sticks As His Toy

This is often the case if you do not have many toys for your dog to play with.

He will have to search around the house and backyard for his “toys” and, since sticks are easily accessible in your garden, that makes them an obvious choice for him.

This is especially so since sticks give him the chewing texture that he enjoys. He is able to keep himself entertained for hours by chewing on a stick.

As sticks come in different shapes and sizes, your dog will certainly be able to find one that meets his expectations and gives him the most chewing satisfaction.

He could also be trying to tell you, “Please play a game of fetch with me”.

You see, there is hardly any dog that doesn’t enjoy playing fetch with a stick, regardless of his size, age, or breed.

With the expansive open spaces in your backyard and freedom for him to roam around, your dog is certainly looking forward to playing a game of fetch with you.

That is why you will see him carrying a stick on his walks and dropping it right on your feet. He is trying to initiate a game of fetch with you!