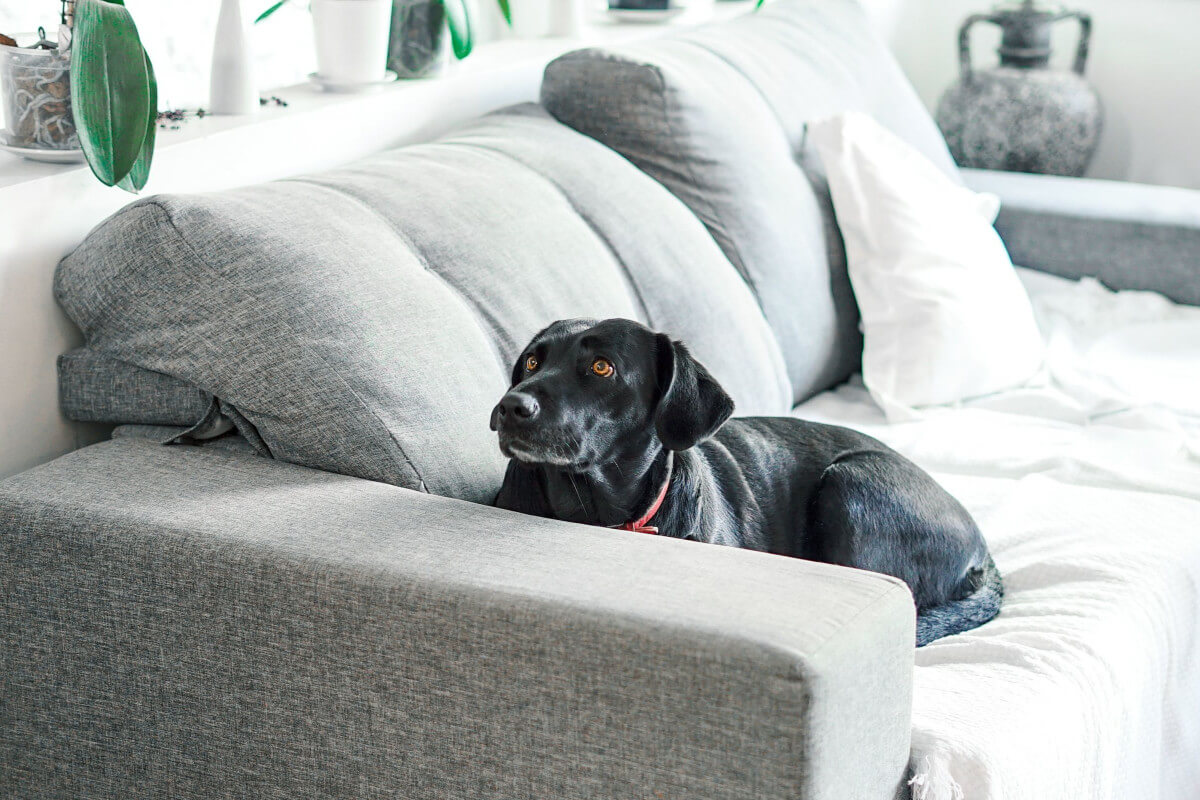 Dog urine is one of those things that just sort of sneaks up on you. You won’t even notice it’s there until you sit down on the couch and realize… “Oh no! What’s that urine smell coming from!!”

It’s really an awful experience, just like having a permanent stain on your favorite pair of jeans.

If your dog is peeing all over your house, in particular on your beloved couch, this posting will show you various ways to keep your dog off your furniture without using any kind of harsh chemicals.

Stop your dog from peeing on the couch by correcting his territorial behavior through surgical sterilization and obedience training. He could also be peeing just to get your attention, being obsessive on the couch or some health issue. Make sure he is potty-trained and keep him in a crate when he is alone.

Your Dog Is Marking His Territory

One of the most common behaviors for peeing is that your dog wants to mark his territory.

A dog’s marking is a territorial behavior, and a dog who marks a lot may be trying to establish his territory, or he may feel threatened by an invasion of his territory.

He may be marking the furniture or walls because he feels like his territory is being invaded.

This is especially so if your dog sees the couch as his territory and when you or your visitors are sitting on it, he feels his territory is invaded. If this happens, you will find your dog starts urinating on the couch.

This is annoying as you have to do all the cleaning and possibly have to replace the couch if it gets soiled or stained with his urine.

You see, dogs who have not been spayed or neutered are more likely to mark their territory.

Spaying and neutering can decrease the urge for dogs to do their marking and reduce the frequency of marking. So you may want to consider this option if your dog has not been sterilized.

Do A Thorough Cleaning On The Couch

The urine scent left by your dog will make him do his potty on the same spot again.

To prevent him from “detecting” this scent, you would need to clean the soiled couch thoroughly with an odor neutralizer or disinfectant.

What you can do is to mask off the smell by spraying some odor eliminator on the spot where your dog has done his business.

You might need to spray some odor eliminator on the couch once every day for a week till the smell is completely eliminated.

There are many other household items that can be used to remove this type of odor from your couch. For example:

1. Baking Soda – Sprinkle baking soda on the affected area and let it sit overnight. In the morning, vacuum the area.

2. Vinegar – Mix one part vinegar to three parts water in a spray bottle. Spray the solution on the affected area and let it sit for about 10-minutes. Then, vacuum the area.

3. Lemon Juice – Prepare a solution by mixing 100 ml lemon juice with 50 ml water. Apply the solution to the affected area and leave it for 10 minutes. Vacuum the area after that.

He Is Doing It To Get Your Attention

Your dog may be doing his marking because he is lonely and suffering from separation anxiety.

Being left alone for too long is a common reason for dogs to become anxious or bored.

If you leave your dog alone for long periods of time, he will try to do things to get your attention and peeing on the couch could be his way of getting your focus!

In this case, he might choose to mark where he thinks you are going to be sitting, so he can get your attention and tell you ….. “Hey! I’m feeling lonely!”

What you should do is to take him for a walk daily, let him run freely in the yard, play fetch with him and give him treats for following your instruction (positive reinforcement for being obedient).

This will help to build up his trust and bond with you over time.

It will also keep him busy, active and happy which will make it less likely that he will continue with his marking behavior to get your attention.

Is Your Dog Obsessive On Couch?

There are some dogs who have weird obsessions about things such as chasing cars, swimming pools, or Frisbees?

Whatever the case, if you discover your dog has a strange “obsessive” on something, you need to find out why and work on correcting his “obsessive” behavior.

It is possible that he is fixating on the couch because he has some sort of anxiety or OCD (obsessive-compulsive disorder) about this thing.

The usual way to address this will be obedience training. But if the training doesn’t work, you should seek professional help as soon as possible.

Your veterinarian will examine your pet and find out what is causing his anxiety or OCD behavior. From there, he will be able to suggest some helpful therapies for your dog.

Train Your Dog To Stay Away From Couch

You can train your dog that it is not okay to sit on the couch without your permission through obedience training.

When you have trained your dog to stay away from the couch, there is less likelihood that he is going to do his peeing there.

Start by teaching your dog to get off of the couch. First, have your dog on leash. When he jumps onto the couch, stand in front of him and say, “Off!”. When he gets off, say, Good boy!

Now, do this over and over again and remember to reward him with either treats or praise when he obeys your instruction to stay away from the couch.

Soon, your dog will learn that whenever he wants to be on the couch, you are going to tell him to get off.

And, if you are consistent and don’t give in to his whining or begging, he will soon learn that getting on the couch means he will have to endure the unpleasant consequences of being told to get off and no rewards from YOU!

Your Dog Is Not Potty Trained

Your dog is not being trained on where he should be doing his potty. So he will simply pee on wherever he goes and if he likes to sit on your couch, that would unavoidably be his potty spot.

This is why you should start him on potty training.

When your dog needs to go for a potty, he would usually show signs such as sniffing and circling around, behaving restlessly, persistent barking and fidgeting.

If you see that, you should immediately bring him out for his potty.

You can take him out to the yard and tell him “Do your peeing here!” Then you give him a treat each time he does his business on this spot.

When he starts to realize that doing his potty outside will earn him a reward, this will positively reinforce this behavior.

In fact, this is one of the best ways to train your dog. After a few days of this routine, you will notice that he will start to do his potty in the designated area whenever he needs to go.

Soon, he will learn to do it automatically even when you stop the rewards.

It’s not your dog’s intention to pee on the couch when he is sitting on it, he just couldn’t control his bladder.

If you find that your dog is still peeing everywhere when he is already potty-trained, he could be suffering from health issues such as urinary tract infections.

You should bring your dog to see a vet for a health checkup. Urinary tract infection (UTI) is one of the most common bacterial infections in dogs and if left untreated, it can lead to kidney failure.

Keep Your Dog In His Crate When He Is Alone

You can keep him away from the couch by getting him to stay in a crate so that he will not have the opportunity to pee on the couch when you are not there to supervise him.

Of course, to make your dog feel comfortable in his crate, you would have to start him on crate training which include:

1. You need to buy a nice metal crate. You can get the crate at any pet store. It should be big enough for your dog to stand up, turn around and lie down comfortably but not too specious for him to do his potty on the other end of the crate.

2. Next, you will want to feed him in the crate. This is to make him associate “Good” things will happen when he is in a crate. That way, he’ll begin to associate the crate with his meals.

3. You will also want to make the crate a place for your dog to relax. Put a warm blanket and some chewing toys in the crate for him to play with.

4. After your dog has associated his crate with positive experience (meals and relaxation), begin to increase the time he will spend in the crate.

Be sure to praise and reward your dog whenever he is in the crate. You can use food treats, play with a small squeaky toy or just give him some affection.

The point is to make him feel that being in the crate is a positive experience for him so that when you have him in the crate, he is not getting stressed or feeling anxiety.

Once he is crate trained, he would “see” the crate as his den and would “love” to be in there.

Dogs don’t like to do his elimination in the places where he eats and sleep, so he wouldn’t be doing his potty in his den and would learn to go outside for his potty needs.