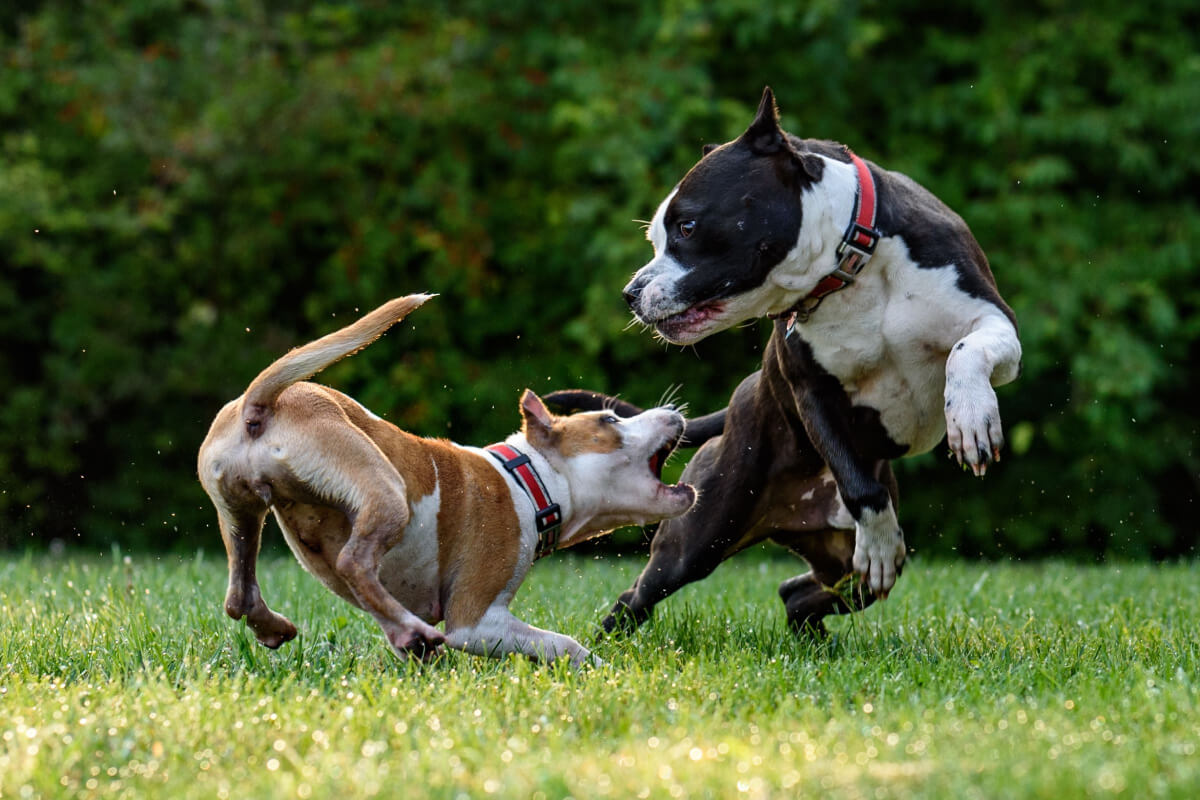 If your dog keeps attacking your other dog, there is always a trigger that makes him do so. He is associating the presence of the other dog as something NEGATIVE.

You would need to correct his thinking so that he will feel something GOOD will happen to him when the other dog is with him and this can be done through positive association.

Through repetitive positive experience, this will make him STOP his aggressive behavior towards the other dog!

There are many reasons as to why one dog attacks another in your household, and you would likely see this happening when you introduce another dog (Bella) to your residential dog (Jack).

If your dog keeps attacking your other dog, it could be due to his jealousy, territory or resource guarding. It could also be his lack of socialization. What you can do is to reinforce good experience whenever he is with the other dog and make him feel that GOOD things will happen when he remains calm.

If your dog (Jack) is very possessive, he would see Bella as a threat to him for stealing away your love and affection. This will make him very jealous of her whenever he sees Bella going near you.

In this case, you would observe a very drastic change in his behavior since the day you adopted Bella. And more often, you would see that Jack is trying to be dominant over Bella and acts to be a “bully”.

This can often be seen in situations when you have Bella getting close to you, sitting just beside your feet while you and your kid are on the couch and Jacks starts to act possessive.

He just can’t stand it (gets jealous) and crawls up to the side of the couch, over the pillows and squeezes his way in between you and your kids.

He is trying to position himself closer to you than Bella who is just below the couch. And if you attempt to bring him down the couch, he will start growling and could also start his attack on Bella.

To make Jack do away with his jealousy, you would need to make him know that when he behaves in this manner, he will lose ALL your attention.

The way to do it will be to tell Jack “Enough!”, stand up from the couch and walk away from him without looking or touching him.

By taking yourself away from the dog, he will learn that there is a bad consequence (that is, you are going to walk away from him) for his negative behavior.

Keep practicing this training and when you see Jack starts to growl at Bella, say “Enough!” and walk away from him.

This will send a CLEAR message to him that his behavior will not be rewarded.

Do this training till Jack doesn’t get aggressive towards Bella with you around them.

This will help him to associate that by remaining calm and not acting aggressive toward Bella, he will get your attention and love.

The next step that you would need to do is to train Jack and Bella that they should take turns for your attention, in particular for Jack since he is jealous of Bella.

The taking turn training is an effective approach to let Jack and Bella know that they will equally get the chance to have attention and no one will be left out!

It will certainly help you to have both dogs under control in the same room.

The way to do the training will be:

1. Have both dogs on either side of the room in a sitting position.

2. You will then give Bella the clue “Wait” while you go over to Jack and say to him “Jack, Your Turn!” and give him some affection by petting on his shoulder.

3. Then, you would change position and tell Jack “Wait” while you go over to Bella and say to her “Bella, Your Turn!” and give her some love and petting on her shoulder.

You might need a helper to watch over Jack as he might go after Bella once he sees you go over to her. The helper will need to continue to reinforce the “Wait” command to him and make him remain in sit position.

Continue with this training till Jack and Bella know that they should wait for their turn to get your love and attention and not to fight over it.

Aggression Due to Territory or Resource Guarding

If you find Jack only gets aggressive and starts attacking Bella when she comes near his territories or going near anything that he finds valuable to him, it is often a sign of territorial and possessive aggression.

You see, before Bella joins your family, Jack owns everything in your house. He gets to own all toys, enjoys his foods, owns his playground, his bed as well as your attention.

Now, with Bella around, he feels a sense of threat and needs to exercise his right to protect what he believes belongs to him.

What you need to do is to work on his terrority and resource guarding behavior and also ensure that you prepare Bella’s own resources such as toys, food as well as a delicate sleeping area.

You can carry out the following training to correct Jack’s territory and resource guarding behavior.

1. Put Jack on a leash and bring him to sit on his bed (which is his territory). You would need a helper to hold on to the leash just in case he decided to act aggressive on Bella.

2. Get ready some high quality treats (I would suggest that you go for some meat type of treats as they are more enticing for dogs) that Jack normally won’t get in his usual meals and toss one of the treats to him as you bring Bella walking past him slowly. Do not make any stop, just walk past his bed.

3. This is to help Jack associate that by remaining calm and not acting aggressive towards Bella as she comes near to his territory, GOOD things will happen. He will be rewarded.

4. Keep doing this till you see that Jack is getting comfortable with Bella walking past without showing any sign of anxiety or aggressiveness.

5. Next will be to increase the difficulty by making a stop in front of Jack’s bed for 5 seconds before moving off. Increase the reward by giving Jack another 2 -3 treats during the stay. This will further reinforce his positive experience of having Bella in his territory.

6. Keep practicing this on Jack till he is comfortable with Bella coming to him (in his territory) and staying with him. You can gradually remove the treats and replace them with praise and petting on his shoulders.

1. Give Jack his favorite chewing toy to play with (this will be the resource that he will likely want to safeguard) and again, put him on a loose leash as a safety precaution.

2. Bring Bella close to him and toss some high value treats to him to make him feel comfortable having Bella come near to him while he is playing with his toy.

3. If he shows signs of aggressive such as growling or showing his teeth, bring Bella away and repeat the step again once he has calmed down.

4. The goal is to make him associate that Bella is not going to take away his toy, so he does not need to act aggressive toward her.

In fact, by having Bella with him while he is playing, he gets both your attention and some enticing treats. This will make him associate Bella with a positive rewarding experience.

If you have not trained Jack on socialization, he is likely not going to be comfortable with Bella in the home.

You see, socialization plays an important role to ensure that Jack knows how to interact and react well to his surroundings, including his new buddy – Bella (making friends with her).

By teaching him not to be nervous and fearful when facing Bella, he will less likely be acting aggressive towards her.

This is how you can get Jack to start socialize with Bella:

2. Once he is comfortable with Bella’s scent, you can get them to do a meet up in a neutral place such as your backyard.

3. Put Jack on a leash and slowly bring Bella up to him. Keep a close watch on Jack’s body language to lookout for any sign of aggressiveness such as showing his teeth or growling. If he is reacting well, give him some high value treat and praise him handsomely.

But if he shows signs of discomfort, bring Bella further away from him till he has calmed down.

Work on getting little steps closer to him gradually (remember to give him treats if he is behaving well) till he is fully comfortable with Bella sniffing him around and playing with him.