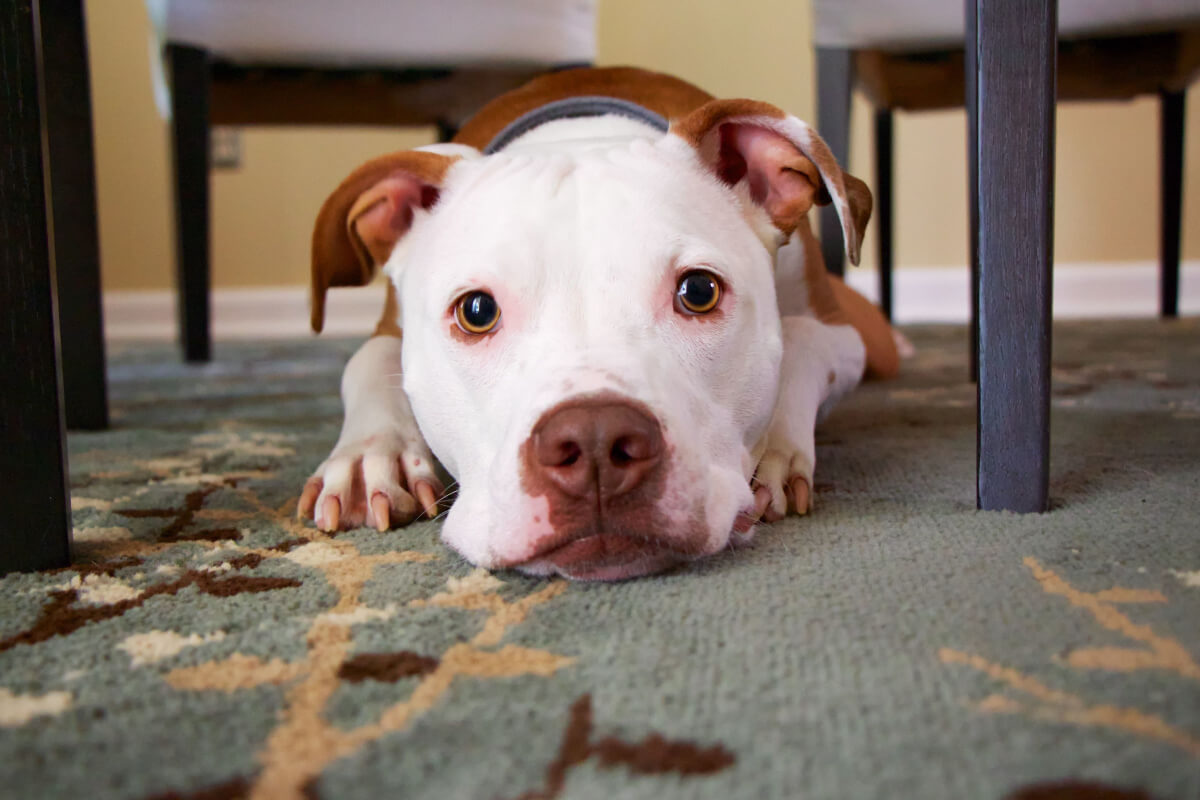 Getting your dog to stop his pooping in the night is certainly something that you would want to work on if you want to do away with cleaning the messes that he had created for you during the night.

Of course, if your dog knows to do his potty outdoors during the night without leaving his dropping everywhere, this could be a blessing for YOU!

If not, the following TIPS shared in this posting will help you greatly.

To stop your dog from pooping at night, make sure that you feed him early so that he is in time to do his pooping before sleep and also take him out for a night walk as exercise helps to make his bowels easier. Watch out for his diet (to avoid constipation and diarrhea) and do not overfeed him.

Watch Out On His Feeding Schedule

For a dog, it takes about 4 hours after eating for a poop.

Make use of this “pooping” schedule to your advantage to plan for the time that you should feed your dog so that he is “free” from pooping in the night.

Say for example, if you feed your dog at 5pm, this will provide him with ample time to digest his food and make his last elimination (around 9pm, based on the 4 hours digestion consideration) before he is off for bed.

With an empty stomach, this will reduce the likelihood of him having to go pooping in the middle of the night.

To help him with the digesting of the food, you can bring him out for a walk after his dinner.

Always remember to reward your dog when he does his pooping during the night walk. The goal is to make him associate that he will be getting praise or petting from you whenever he does his potty in the walk.

Dogs like to praise their owner, so by giving him your attention through praise and petting, you are positively reinforcing his behavior.

I would suggest that you should avoid giving your dog any treats as a form of reward because the goal of the walk is to clear his bowel. So NO food after his dinner.

Watch Out On His Diet

The type and amount of food that you feed your dog also plays a role in affecting how often he would do his poop.

What you feed him has to come out at some point, correct?

Keeping a lookout on your dog’s stool will shed some valuable information that can certainly help you to address your dog pooping problems.

This is often a sign of diarrhea and could be caused by your dog’s body isn’t adapting well to the food that you are feeding him.

It could also be due to environmental factors such as you are changing a new home or you have a new family member and that causes his anxiety.

If your dog‘s poop is of hard pebble form, it’s a sign of constipation. This is pretty common for dogs who are fed with commercial dry kibble.

Dry kibbles are often high in dietary fiber but often lack moisture and that could lead to hard dry poop. Also, if your dog is not getting adequate water intake, his poop would certainly be dry and hard.

More often, if your dog starts to poop in the night despite that you have made him do his potty before his sleep, and his poop is of watery type, he is having diarrhea.

The way to address is will be: (for watery poop)

Stop the dry kibbles food and get him on a diet that is gentle on his stomach.

Go for some plain steamed food such as broccoli and pumpkin and mix it with your dog’s favorite meat type of food.

Add in more vegetables in his meal as the goal is to cleanse his body and help him solidify his stool.

And in case his poop is of hard pebble type, it would be constipation. Constipation could cause your dog to “miss” his usual pooping time and do his elimination at irregular hours.

He may not be able to do his pooping after 4 hours of having his meal and “drag” the pooping time into the night.

The way to address is will be: (for dry hard poop)

Get your dog to drink more water. If your dog is willing to drink from his water bowl, just make sure to refill the bowl when it is empty.

If your dog is refusing to drink water, try to give him some foods that are rich in water content such as green vegetables or steam mashed pumpkin which are rich in dietary fiber to help him smoothen his stool.

Keep in control on the amount of food that you are feeding your dog, in particular for the evening meal if you want your dog to stop his pooping in the night.

Overfeeding your dog could put extra demand on his digestive system and upset his digestion. And that could lead him to delay his elimination before his sleep and do his potty in the night.

To ensure that you manage his diet, keep a record on what you are feeding him on his main meals, including treats and table scraps, so that you have a clear view of what he had for the day.

Getting your dog involved in some physical workout daily is a necessity to ensure that he has a smooth bowel.

You see, exercise helps to prevent constipation in dogs by promoting healthy blood flow. This flow of blood will improve the movement of the digestive tract and allow food to be moved much more easily through the digestive system and get digested faster.

With a good digestive system, your dog will have no difficulty in performing his poop on time.

You can plan for some physical games such as playing fetch, chasing bubbles or playing flirt pole with him during the day.

Only bring him back home when he has done his elimination during the walk.

The idea is to make him learn that he would only be allowed to go back home if he does his elimination during the walk.

Put Him In A Crate For The Night

If your dog pooping problem is the result of him NOT potty trained yet, putting him in a crate will temporarily help you to address his pooping issue while you carry out his potty training.

This is why it’s important that you have to make him empty his bladder right before his bedtime.

Once he is potty trained, you would not have to worry that he poops all over your house in the night as he would be able to make his trip outside to do his potty.

The disadvantage of having him in a crate is that he may whine and bark during the night when he needs to go for his potty since he is not able to move freely out of the crate to do his elimination.

Never Scold Or Yell At Him For Any Accident

As your dog is still in the process of potty training, it is inevitable that you would see accidents happening in your house.

It’s important to keep calm and refrain from throwing your temper at your dog as this will make him think that the way to get your attention is through pooping.

And guess what he will do next? He will poop in the night whenever he wants to get your attention to ease his loneliness.

If your dog is still new to your home and adapting to his new environment, he may be suffering from separation anxiety especially during the night when everyone is asleep, and he finds himself alone.

Persistent separation anxiety will lead to stress and may cause your dog to suffer from diarrhea and lose control over his bowel.This could lead to him pooping in the night.

What you can do to ease his separation anxiety is to have him in a crate and bring the crate to your room for the night. As he will now be able to see you from his crate, he will not feel so lonely and stress up.

You should not leave out the possibility of your dog suffering from some health issue that leads to his uncontrolled pooping.

One of the common health issues happening to old dogs is their ability to control their bowel. As your dog ages, he gradually starts to lose control of his muscle tone and this leads to what is known as bowel incontinence.

He could also be suffering from a health condition known as canine cognitive dysfunction.

Dogs suffering from this disorder often forget what he had done previously (he may have already done his poop outside just before his bedtime) and still do his poop again when you bring him back home.