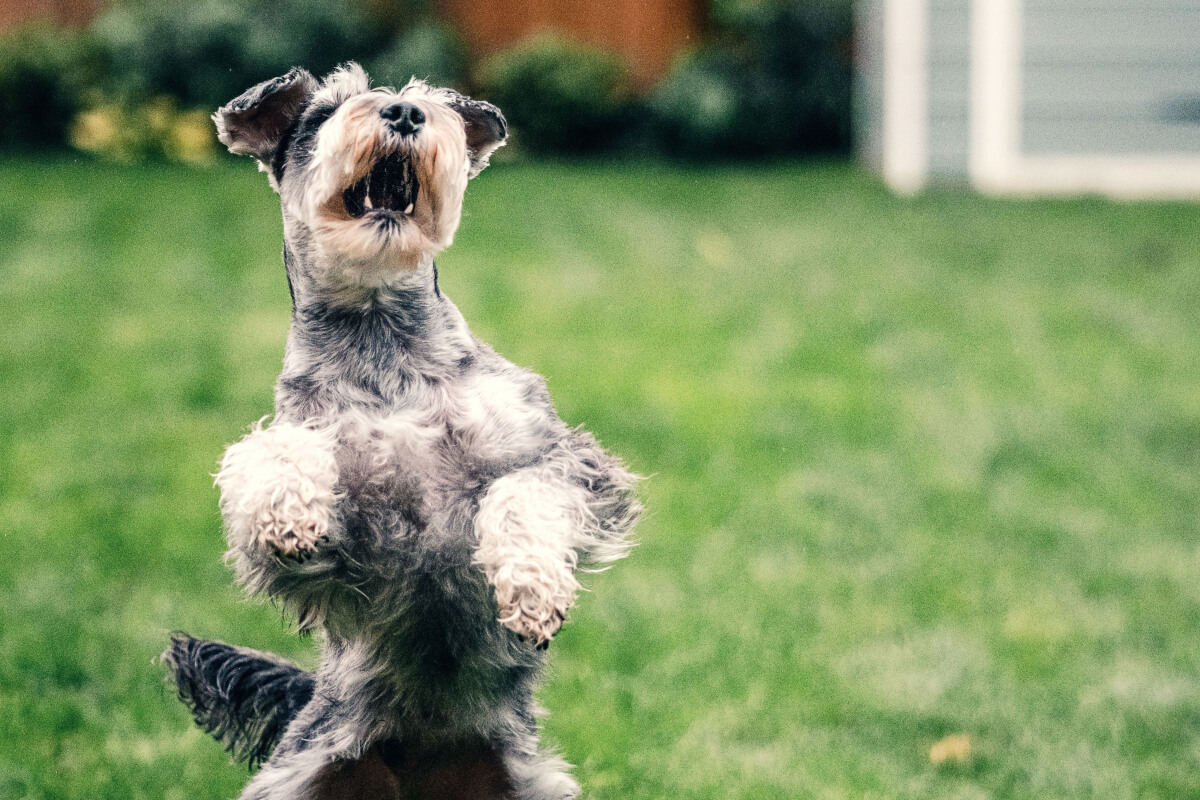 Seeing your dog jumping on people is certainly something embarrassing and is a behavior that you need your dog to stop.

Your dog may view his action (jumping) as an act to engage with you or others since dogs like to greet us at our face.

The way to stop your dog from jumping on people is to make sure that he is NOT getting any attention from anyone unless all his four feet are on the ground. Avoid any yelling at him as it would only make him more excited. Help him to release his pent-up energy through physical ​and mental simulations.

So let’s dive straight on WAYS that you can do to make your dog do away with that “JUMPING” habit by addressing the CAUSES that lead to his behavior.

Release Pent-Up Energy in His Body

Make sure that you have planned for some intense physical and mental simulation for your dog daily, especially if your dog is super energetic and hyperactive.

It would be a challenge for your dog who has excessive energy to stay calm and listen to you.

Think about if your dog is bred to herd sheep and now he is made to stay in your house doing nothing, he will be pent-up with so much energy that there is no outlet for him to release.

So you would have to find a way for him to be mentally and physically satisfied.

I have found that the most efficient way to get my dog tired and satisfied so that he will give up the idea of jumping on me is through playing the “Fetch” game. This game effectively helps him to release that pent-up energy in his body.

Teaching your dog to play fetch is similar to you learning to play a new game. Once you get hooked on the games over time, your hand can never leave the game again.

This is what you hope to achieve for your dog, that is, to get him engrossed and immersed in the game to help him let off his excessive energy.

This is how I train my dog on the game of “Fetch” to release his energy:

1. I do not use treats when teaching my dog fetch game. You see, dogs use their mouth for 2 main purposes – eating or grabbing stuff.

From a training perspective, I would want him to be in “play” mode, so I will avoid giving him food to steer him away from “food” mode.

2. I would want him to associate the reward with continuing playing the games and not getting a treat from me.

3. The way to teach my dog to fetch is not to throw the rope toy but getting him to be interested in the toy first. Teaching him to fetch starts with teaching him a good tug of war and a good let of go action.

4. When he is pulling on the toy, I will make it uninteresting by stop pulling and simply holding on to it till he lets go. And when he does it, I will immediately give him back his rope toy.This is to let him know that when he lets go of the toy, I’m going to give him back the toy as a reward.

5. Once he has tugged the toy and knows how to release it, I will proceed with training him to fetch the toy by tossing it away for a short distance. The goal is to encourage him to chase the toy and bring it back to me.

7. And if he chases the toy but doesn’t bring it back to me, I will pull on the long leash that is on him to get his attention and make him look for me with his toy.

8. I will usually carry out this game with him first thing in the morning just to help him let off that energy he had accumulated over the night and the day will start beautifully with NO jumping!

Of course, apart from this game, you can also get your dog involve in other physical games such as playing flirt pole, chase bubbles, water games or play find treats.

As for the mental simulation games, I would give my dog a KONG toy stuffed with peanut butter to play with. The goal is to make him utilize his brain power to think of a way to get the treat out from his toy.

At times, I would also train him some new tricks and new commands to make him learn new things and exercise his mind.

Trained Him To Behave Himself

Have you ever taught your dog to sit and stay when he is excited?

You see, just like you need to teach your kid to behave himself and remain seated and not run around when you have a guest, you would also need to train your dog on obedient training as well.

This is how you can train your dog on what I would consider the MOST important  basic obedience commands: – Sit and Stay.

1. Get ready some high value raw meat treat such as salmon, turkey, beef for your dog’s training.

2. Hold the treat in your hand and lure your dog to go into the sit position. You can do this by placing the treat high up near to his nose and the moment his butt touches the floor, you would praise him and give him the treat.

3. Do not move your treat too fast in front of him else he will lose track of it and lose his interest in your lure.

4. Once he is comfortable with this step, you would want to phase out the luring and just show him the treat in your hand.

The goal is to make your dog go to the sit position willingly when he sees you holding a treat in your hand. Reward him with the treat immediately when he does the action.

5. Keep repeating this till your dog starts to get the idea and you can start to introduce the “sit” command to him as soon as he starts performing the sit action.

6. The goal is to make your dog associate the “sit” command with a positive rewarding experience so that when you say this command to him in the future, he will follow it obediently.

1. To practice this command, you would perform the same steps as the “Sit” command but take a little longer to give him the treat when he is in the sit position.

2. It’s more of saying to him “hey, if you stay in that position for a while, I’m going to give you the treat!”

3. When he is reasonably confident on remaining in sit position for 2-3 seconds. You can now introduce the “stay” command to him.

4. Say the command “Sit” to him and as he starts to sit down, follow with the “Stay” command to make him remain in that position for 3 seconds. Reward him immediately when he obediently follows it.

5. Avoid asking him to stay for too much of time without giving him any reward as this will make him move away. Only increase the duration gradually when he is reacting well to the command.

6. Remember, the goal is to make your dog associate the command “Stay” with a positive outcome (he will get a reward for that!).

Find out under what circumstances does your dog jumps on you and starts his licking and work on desensitizing him for these situations.

It could be the time when he sees you coming back from work or when you have guests coming or your parents visiting you or when you are out from a shower.

The goal is to make the situation less exciting and nervous for your dog.

For my case, my dog likes to jump on me whenever he sees me going into the bedroom. So I will have to think of a way to make him associate seeing me coming to the bedroom is NOTHING to be excited about.

The way that I do to calm down my dog:

1. I calmly open the door to the bedroom (do not show any excitement as that would make him get excited as well) and when he starts to jump on me, I will turn away from him and leave the room immediately.

2. I have to keep repeating this action till he gets the idea that when he jumps on me, he will be alone.

3. If he had his four paws on the floor when I entered the room, I would reward him with my attention and of course, a treat for him. The idea is to reward him for his positive behavior (keeping calm and not jumping up).

The reward can be in the form of praise, treats or just a simple petting of him to show him that I love his behavior.

Reward Him When His 4 Feet Are On The Ground

When you are in the house watching TV or doing house chores and your dog is behaving well and not jumping on you, reward him randomly.

You would want him to know that you are very happy and pleased with his calmness and are rewarding him for his good behavior.

Over time, he will learn that by being calm and stop jumping on you, he is getting some reward from you.

This rewarding experience will make him feel good, and he will love to repeat that behavior again.

Do Not Scold or Yell Your Dog From Jumping

You see, the reason why your dog jumps up on you is because he wants your attention.

And if you start yelling or scolding at him, you are in fact giving him the attention that he is looking for.

Although it’s going to be a negative one, your dog wouldn’t know the difference as he couldn’t understand your language. What he sees is that you are reacting to his action!

What you should do is calmly turn your back facing your dog the moment he jumps on you and walk away quietly. Make this less exciting for your dog and this will help him to calm down.

And when he had calmed down, go over to him and reward him for being calm.